A bus company has been criticised for providing movable ‘shower curtains’ as barriers to protect drivers from coronavirus, despite a union calling for Perspex screens.

The Rail, Maritime and Transport union (RMT) hit out at First South West Buses after receiving complaints over the clear plastic film being used as a screen.

The union said it had asked for protective Perspex screens to be installed, similar to how supermarkets have been protecting checkout staff.

Video footage sent to the RMT shows a driver moving a transparent piece of plastic film which covers their door but does not continue up to the windscreen, leaving a large gap.

The thin film, which the RMT described as a ‘shower curtain’, is fixed to the top of the cab but is not attached anywhere else, which the union said has led to passengers simply pulling the barrier back to talk to drivers.

The criticism comes after at least 14 transport workers have died after testing positive for Covid-19, including nine bus drivers. 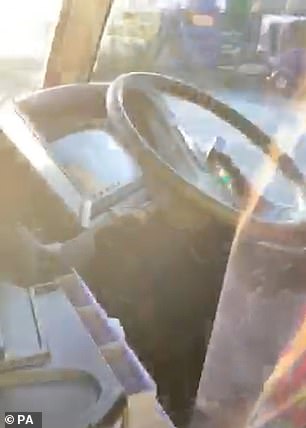 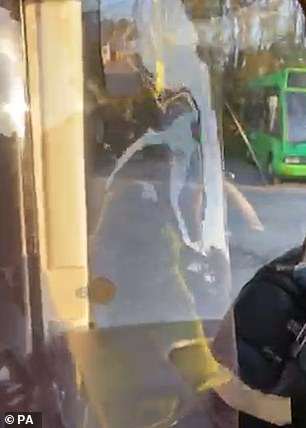 Video footage sent to the RMT shows a driver moving a transparent piece of plastic film which covers their door but does not continue up to the windscreen, leaving a large gap

The transport company, which is part of the large FirstGroup, serves areas including Cornwall and Somerset.

In a letter to the company’s managing director, RMT general secretary Mick Cash said: ‘My local Sainsbury’s are clearly far more concerned with the safety of their staff than you appear to be.

‘Sainsbury’s have within 24 hours sourced and fitted to multiple checkouts high-quality Perspex screens that give a good level of protection.

‘I would urge you to reconsider your approach to this matter and show that you can step up to protect your staff in this time of national emergency.’

In response to the pandemic, Transport for London launched pilot schemes on some of its bus routes, including discouraging the use of seats near to the driver and asking passengers to board using the middle doors. 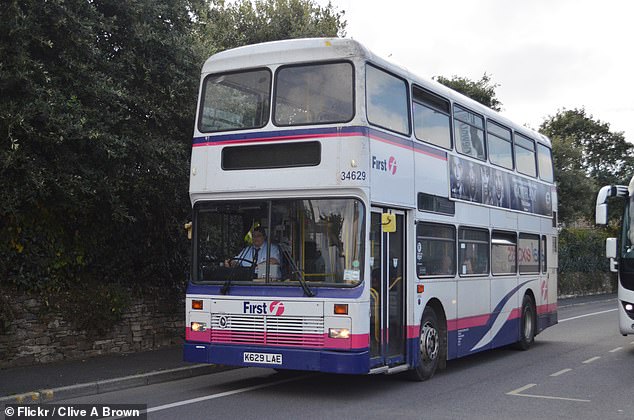 The transport company, which is part of the large FirstGroup, serves areas including Cornwall and Somerset

The RMT union previously called on all bus companies to provide a number of measures to protect drivers, including moving to cashless travel, enhanced cleaning and sanitisation regimes on buses, buildings and mess rooms as well as the installation of screens.

The union has also raised the issue of drivers being unable to adequately wash their hands, especially while on rural routes.

Mr Cash continued: ‘RMT also has other concerns about the bus industry including issues for engineering staff in depots and the facilities provided for employees in mess rooms.

‘Many bus drivers on rural routes have no access to facilities to wash their hands – a key risk control measure as advised by Public Health England.’