Maybe Mikel Arteta’s luck has finally changed after a dismal start to the season. The Spaniard must have feared the worst when his wobbly £50 million summer signing Ben White underhit a backpass and watched in horror as Burnley substitute Matej Vydra charged on to it and tumbled over as goalkeeper Aaron Ramsdale rushed out to clear the mess.

Referee Anthony Taylor had no hesitation in awarding Burnley a 69th-minute penalty that would have given them a chance to cancel out Martin Odegaard’s first-half opener from a brilliant free-kick.

After three consecutive defeats to open the campaign and a narrow win against Norwich last weekend, Arsenal’s confidence might have evaporated at that stage but they were saved when the VAR asked Mr Taylor to check his monitor and he saw that Ramsdale had got the slightest nick on the ball before connecting with Vydra. 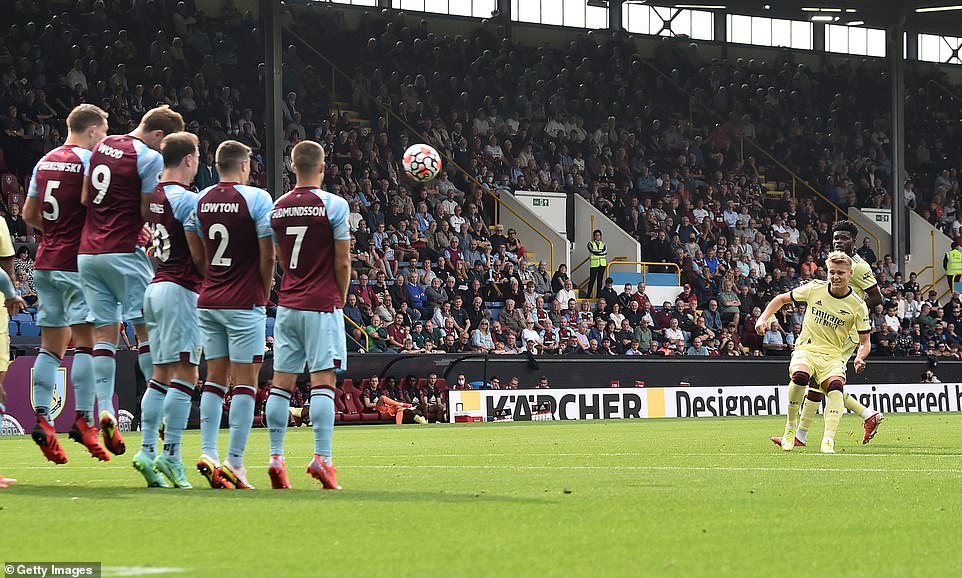 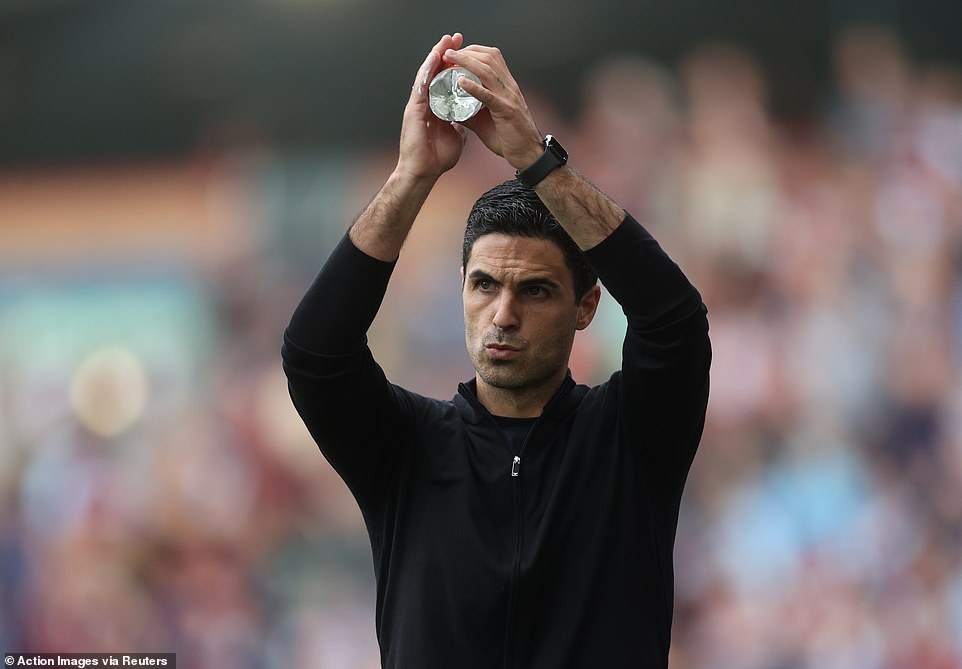 The victory is a major boost for Arsenal manager Mikel Arteta, whose team have now managed to win two games in a row 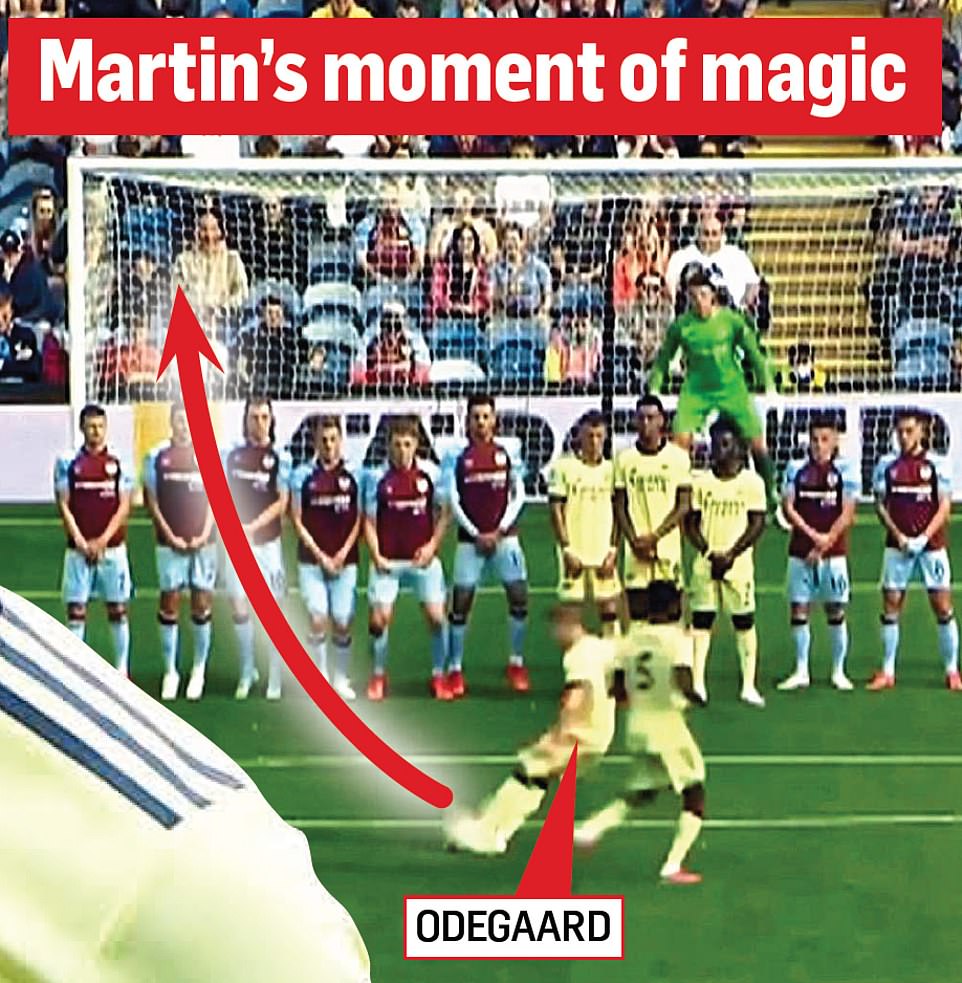 So no penalty, Arsenal held on to a win and having been bottom a couple of weeks ago and Tottenham top, they could join their rivals on the same number of points if they win next weekend’s north London derby.

Arsenal boss Mikel Arteta was delighted by his side’s second consecutive clean sheet after failing to score in their opening three matches of the season.

‘The back four were really solid, Takehiro Tomiyasu and Gabriel were terrific. Gabriel has adapted well to this league. He can communicate better as his language improves.

‘It doesn’t get much harder than playing at Burnley. They put you under a load of pressure.’

Arteta looked delighted as he went to the 2,000 away fans at the end but there was also a brief disturbance between the two sets of supporters after the players had returned to the dressing room.

A line of stewards prevented any serious fighting but there were a lot of missiles being thrown by both sets of fans at each other.

The result wasn’t quite the celebration Burnley boss Sean Dyche had in mind when he signed a new four-year contract at Turf Moor on Thursday.

His side haven’t won at home since January, a run of 13 games, and though he looked furious at seeing a rare spot-kick snatched away, there is plenty of work to do with Burnley stuck in the bottom three without a victory this season.

One consolation was an encouraging debut for £15m winger Maxwel Cornet, signed from Lyon in the summer. He made his entrance after 57 minutes and almost made an immediate impression with a shot from 12 yards that Ramsdale did well to scoop over.

England manager Gareth Southgate, sitting in the stands here, would have been impressed by Arsenal’s quality in the opening 45 minutes as Burnley surprisingly failed to lay a glove on them. 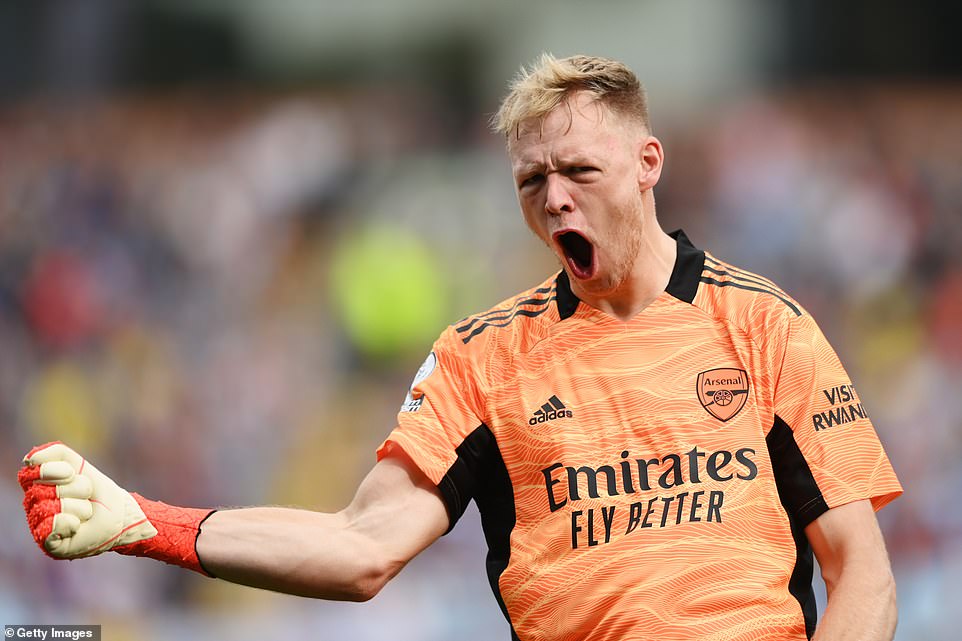 Goalkeeper Aaron Ramsdale, who was again preferred to Bernd Leno, managed to keep a clean sheet as the Gunners won 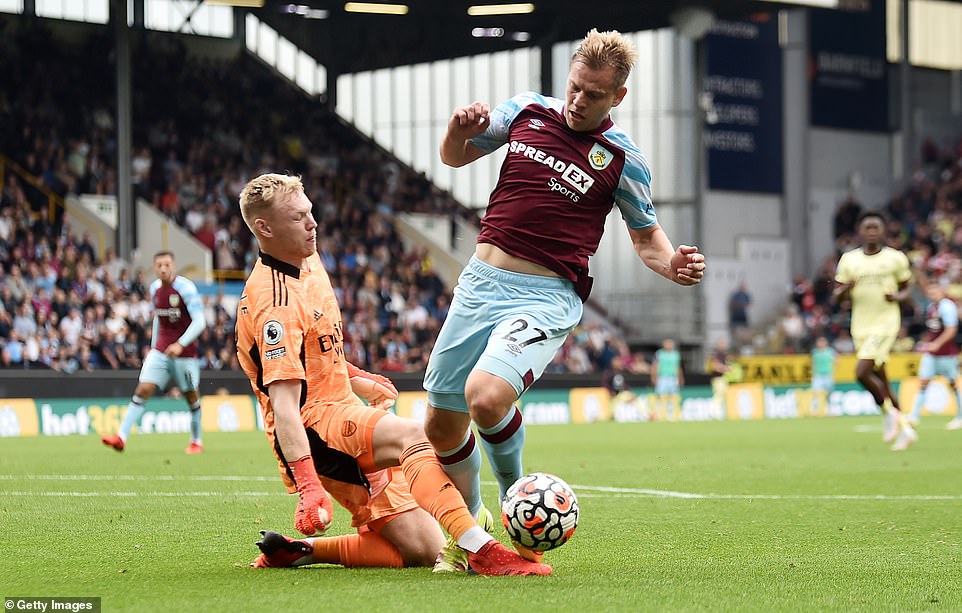 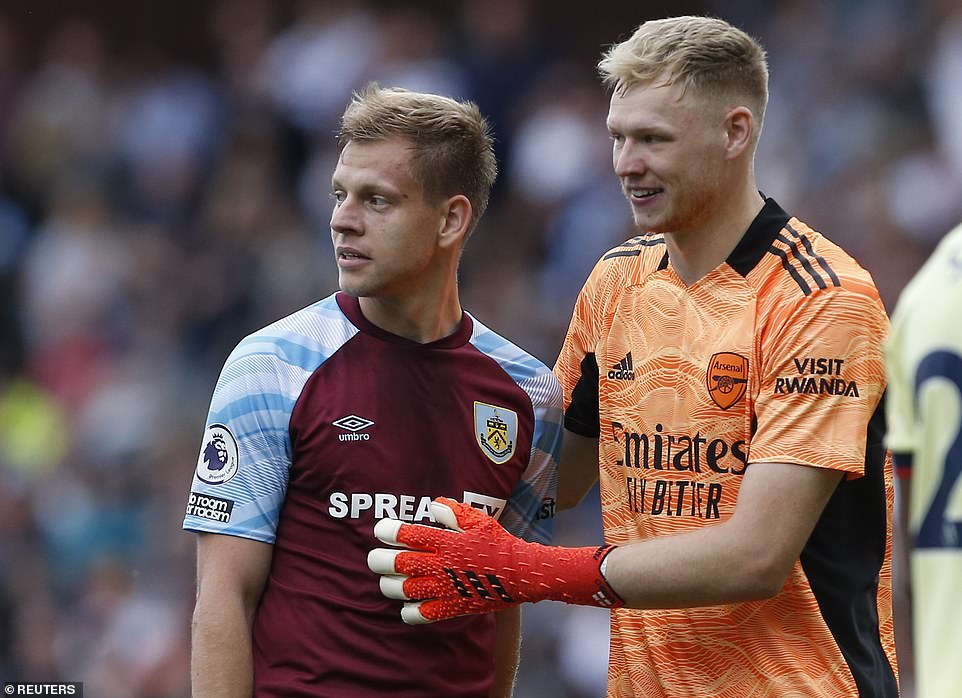 Vydra felt Burnley should have been given a spot-kick but was left disappointed, with Arsenal going on to take all three points 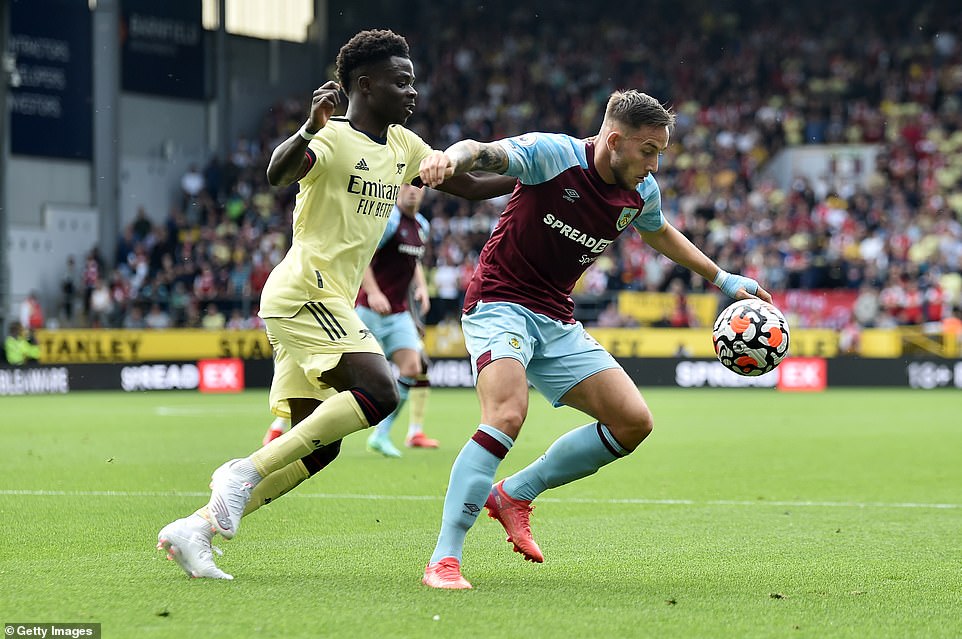 Sean Dyche could have no complaints about the decision to overturn the penalty awarded initially by Anthony Taylor for a foul by Arsenal goalkeeper Aaron Ramsdale on Burnley’s Matej Vydra.

On first viewing, you could see why Anthony pointed to the spot — Vydra took advantage of Ben White’s weak back pass, looked to move the ball away from Ramsdale and went down under the challenge.

At speed, it looked like a certain penalty but VAR checked — as it always does with the awarding of a penalty — and Lee Mason saw that Ramsdale had played the ball with his outstretched foot and had not fouled Vydra. It’s an excellent VAR intervention.

The key moment arrived after 30 minutes when Bukayo Saka’s run towards the penalty area was abruptly ended by Ashley Westwood clipping his heels.

Three Arsenal players stood around the resulting free-kick but it was Odegaard who took responsibility and curled left-footed into the corner beyond Nick Pope’s despairing dive.

It was the Norwegian’s first goal for the Gunners since turning his loan from Real Madrid into a permanent £30m move in the summer.

Burnley were more direct in the second half and the volume went up when Cornet was introduced shortly before the hour.

The Ivory Coast international had a chance to make an immediate impact but Ramsdale tipped over his effort. The Arsenal goalkeeper and Gabriel were both excellent in combating the aerial threat of Chris Wood and Ashley Barnes.

Pepe and Pierre-Emerick Aubameyang both failed to deliver a good final ball when Arsenal threatened on the counter and that looked costly when White erred and Vydra nipped in.

Dyche looked hacked off as the penalty to his side was given, and then taken away. ‘The referee seemed clear in his mind it was a penalty,’ he said.

‘I have to be careful because the keeper does get a touch on it. But in other seasons, that would be a penalty. I thought we were excellent in the second half but I feel like a broken record saying that. You can’t only keep performing well, you need wins. I’m not naive.’ 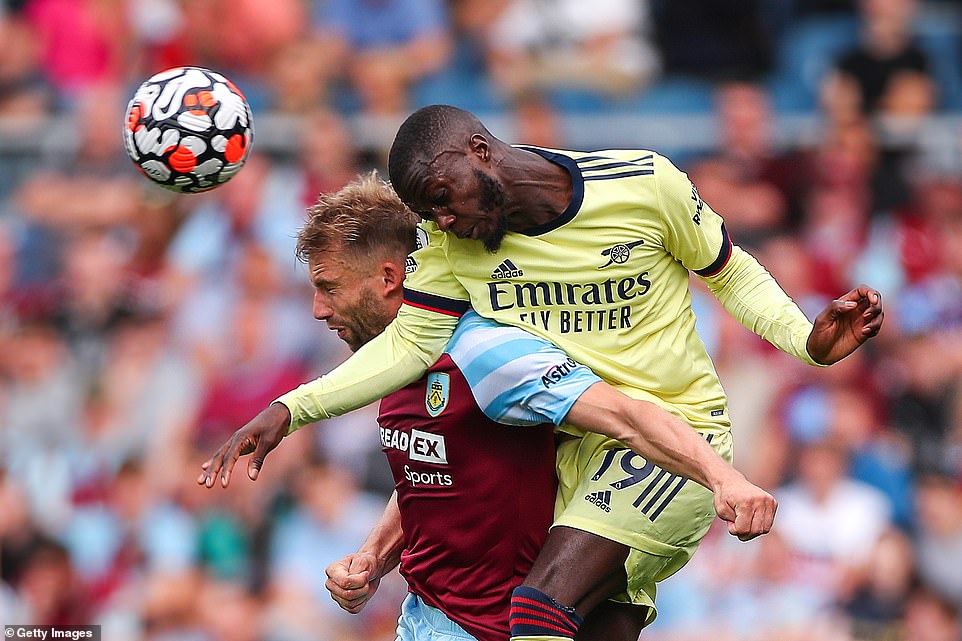 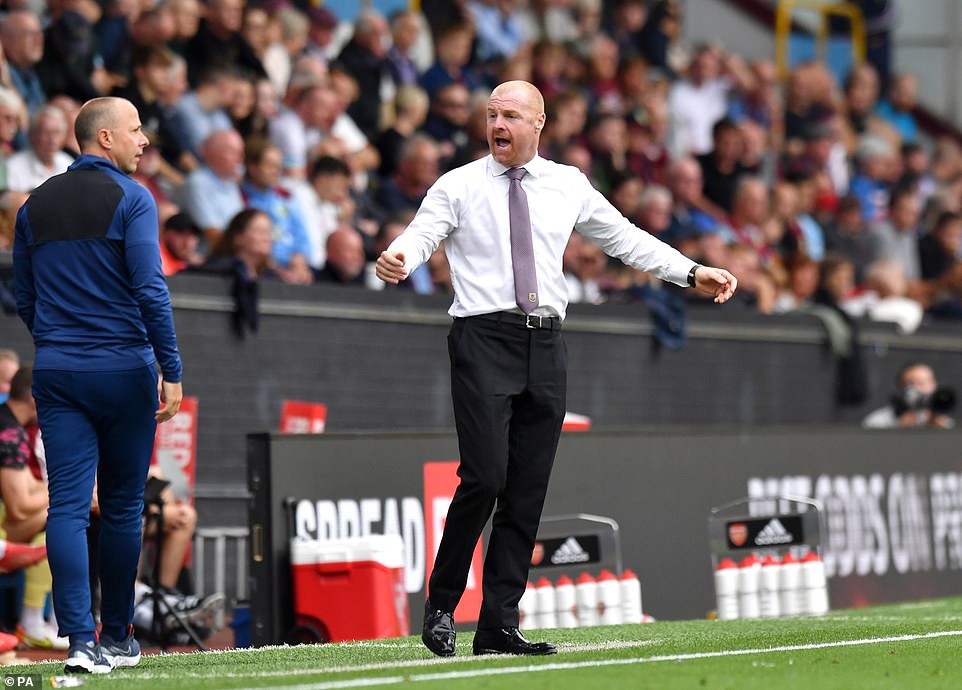 Sean Dyche was left frustrated, with his Burnley side having taken just one point from five matches so far this season 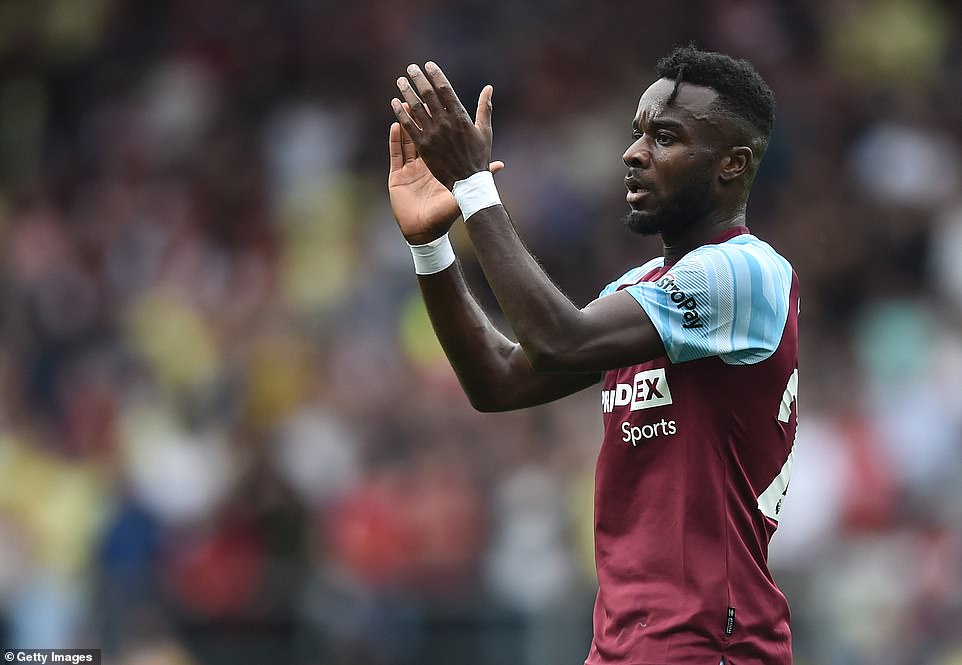 Burnley gave a debut to Maxwel Cornet, with the former Lyon player entering the fray as a substitute in the 57th minute

For Arsenal, the manner in which they kept a clean sheet pleased their manager who has had to fight off accusations his team have a soft underbelly.

‘It was a really hard-fought victory,’ Arteta said. ‘We had to defend crosses and the long ball really well. We have players who don’t have the best qualities to do that but we showed commitment. 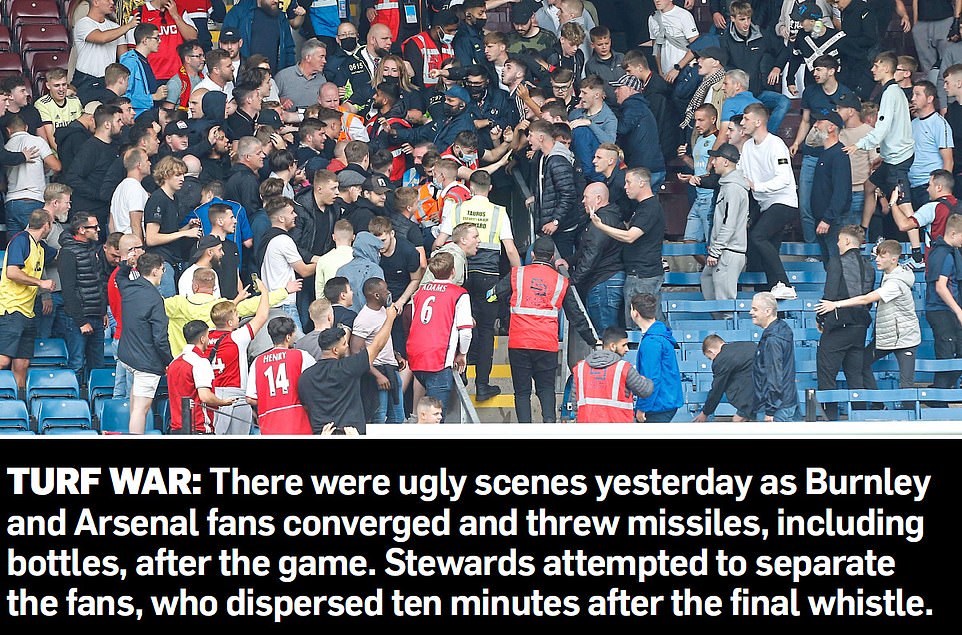