Bukayo Saka has spoken out for the first time since missing a penalty in England’s Euro 2020 final defeat to Italy, claiming that he knew instantly that he would be targeted by racist abuse.

The Arsenal and England midfielder was one of three penalty takers for the Three Lions that missed their spot-kick, along with Marcus Rashford and Jadon Sancho.

Both Rashford and Sancho shared their thoughts in recent days and now Saka has spoken out having been the victim of racist abuse online in wake of his missed penalty.

‘I knew instantly the type of hate that I was about to receive,’ Saka wrote on Instagram, ‘that is a sad reality’.

‘There is no place for racism or hate of any kind in football or in any area of society and to the majority of people coming together to call out the people sending these messages, by taking action and reporting these comments to the police and by driving out the hate by being kind to one another, we will win.’ 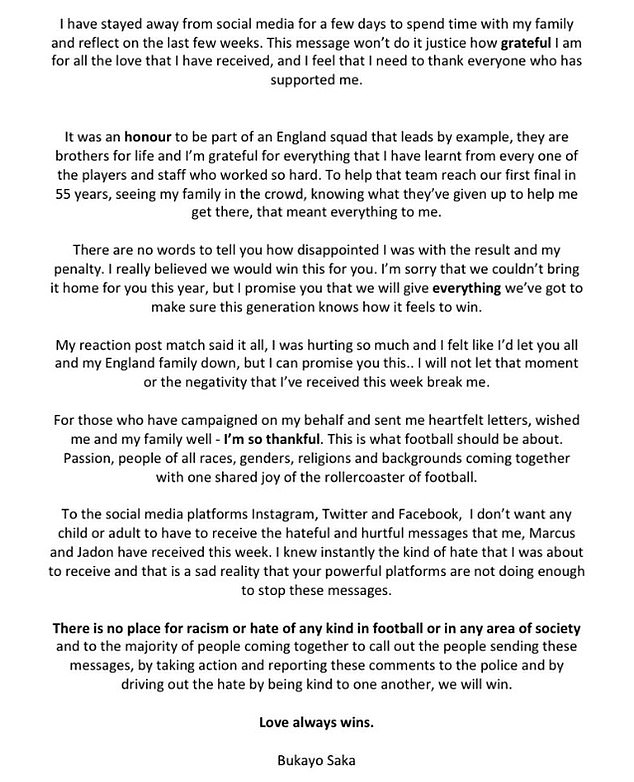 In a statement posted on Instagram, Saka said he knew he was going to be racially abused as soon as he missed the decisive penalty kick against Italy in the final of Euro 2020 this month

Saka was inconsolable after missing the decisive penalty which sealed a 3-2 shootout win for Italy at Wembley.

Leeds’ Kalvin Phillips immediately ran over to speak to Saka, who was seen in tears with his head buried in his England shirt.

In his statement, Saka added that he felt like he had let his country down for seeing his spot-kick saved.

‘There are no words to tell you how disappointed I was with the result and my penalty,’ he said.

‘I really believed we would win this for you. I’m sorry that we couldn’t bring it home for you this year, but I promise we will give everything we’ve got  to make sure this generation knows how it feels to win.

‘My reaction post match said it all, I was hurting so much and I felt like I’d let you all and my England family down, but I can promise you this… I will not let that moment or the negativity that I’ve received that week break me.’

Saka’s poignant statement arrives as chiefs at the UK Football Policing Unit revealed ‘dozens’ of people are being investigated for racist tweets about England’s stars – with four people arrested so far.

Social media giants Twitter, Facebook, Instagram and TikTok have so far refused to reveal to MailOnline how many posts were reported to them for racism, or how many of those were judged to be in breach of their policies.

Rashford has opened up about missing the penalty and the aftermath of the game, saying: ‘I’m Marcus Rashford, 23-year-old black man from Withington and Wythenshawe, south Manchester. If I have nothing else I have that.’

Sancho, in his statement, insisted ‘we need to do better as a society’ and ‘hold people accountable’ as he spoke for the first time after he and his ‘brothers’ Rashford and Saka were racially abused.

The statement read: ‘I’ve had a couple of days to reflect on Sunday’s final and still feel a mix of emotions. I would like to say sorry to all my team-mates, coaching staff and most of all the fans who I let down.

‘This is by far the worst feeling I’ve felt in my career. It’s hard to even put into words the real feeling, but there were so many positives to take away from this tournament though the defeat will hurt for a long time. My first thought before going into any football match is always ‘How can I help my team?, how am I going to assist? how am I going to score? how am I going to create chances?’

‘And that’s exactly what I wanted to do with that penalty, help the team. I was ready and confident to take it, these are the moments you dream of as a kid, it is why I play football. These are the pressured situations you want to be under as a footballer. I’ve scored penalties before at club level, I’ve practised them countless times for both club and country so I picked my corner but it just wasn’t meant to be this time.’

Twitter has said it had removed more than 1,000 posts in 24 hours, and suspended a number of accounts for violating its rules. Facebook said it too had quickly removed abusive comments on its platform and Instagram. 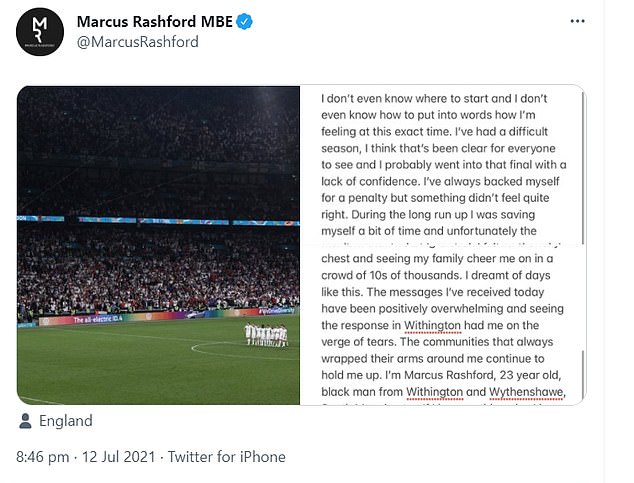 Jadon Sancho condemned the racists who abused him and his team-mates as he penned a long, heartfelt message on Instagram in response to the Three Lions’ Euro 2020 heartbreak

One campaign group identified 42 Instagram comments likening players to monkeys, 17 posts using the ‘N-word’ and 15 telling players to ‘return’ to other countries, despite the fact that all three were born and raised in the UK.

The Center for Countering Digital Hate recorded details of 105 accounts that had posted those comments so it could track them.

By 11am this morning, the organisation said that out of the 105 accounts it had reported and tracked, only 17 were no longer on Instagram – because either the company or the user had removed them.