How timber cities could help curb climate change: Building urban houses out of WOOD rather than steel and concrete would avoid more than 100 BILLION tons of CO2 emissions by 2100, study claims

It’s often seen as an old-fashioned material, but a new study suggests that building more urban houses out of wood could help to curb climate change.

Researchers from the Potsdam Institute of Climate Impact Research claim that more than 100 billion tonnes of carbon dioxide (CO2) emissions could be saved by 2100 if 90 per cent of the new global urban population is housed in buildings made from wood.

Wood is a renewable resource and carries the lowest carbon footprint of any comparable building material.

‘Production of engineered wood releases much less CO2 than production of steel and cement,’ said Abhijeet Mishra, lead author of the study.

‘Engineered wood also stores carbon, making timber cities a unique long-term carbon sink – by 2100, this could save more than 100Gt of additional CO2 emissions, equivalent to 10 per cent of the remaining carbon budget for the 2°C target.’

It’s often seen as an old-fashioned material, but a new study suggests that building more urban houses out of wood could help to curb climate change (stock image)

What is engineered wood?

Engineered wood is made from the same hardwoods and softwoods used to manufacture lumber, but mixed with additives like adhesives.

This type of wood often utilises waste wood from sawmills, and is treated through chemical or heat processes to produce wood that meets size requirements that are hard to find in nature.

It’s used in a variety of applications, from home construction to commercial buildings to industrial products.

Currently, more than half the world’s population lives in cities.

And by 2100, this number is set to increase significantly, according to the researchers.

‘This means more homes will be built with steel and concrete, most of which have a serious carbon footprint,’ Mr Mishra said.

‘But we have an alternative: We can house the new urban population in mid-rise buildings – that is four to 12 stories – made out of wood.’

In the study, the team studied four different land-use scenarios – one with conventional building materials like cement and steel, and three with additional timber demand.

They also analysed how the additional timber demand could be satisfied, and what the consequences for carbon emissions would be.

‘Our simulation shows that sufficient wood for new mid-rise urban buildings can be produced without major repercussion on food production,’ said Florian Humpenöder, co-author of the study.

‘Wood is sourced from timber plantations as well as natural forests. 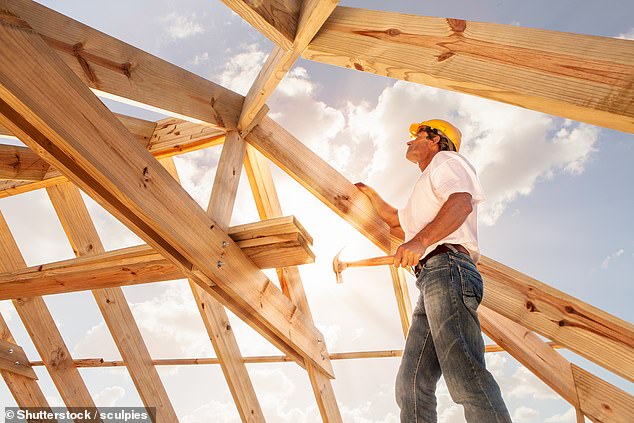 ‘Most of the additional timber plantations needed – we are talking about roughly 140 million hectares – are established on harvested forest areas and thus not at the cost of agricultural land.

‘We need farm land to grow food for the people – using it to grow trees could potentially cause competition for the limited land resources.’

The question of how and where we could source the wood is crucial, according to the researchers.

Alexander Popp, co-author of the study, explained: ‘In our computer simulations, we have set a clear limit to timber extraction and for adding new tree plantations: Nothing can be cut off in pristine forests and biodiversity conservation areas.

‘The explicit safeguarding of these protected areas is key, but still, the establishment of timber plantations at the cost of other non-protected natural areas could thereby further increase a future loss of biodiversity.’

The researchers hope their findings will encourage authorities to consider wood as a building material for urban homes.

‘Our study underlines that urban homes made out of wood could play a vital role in climate change mitigation due to their long-term carbon storage potential,’ Mr Mishra concluded.

‘Strong governance and careful planning are required to limit negative impacts on biodiversity and to ensure a sustainable transition to timber cities.’ 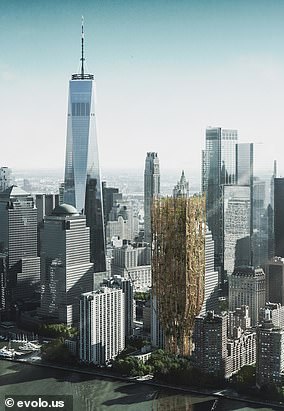 The ‘Living Skyscraper for New York City,’ a high-rise made from specially modified trees, beat out nearly 500 other submissions to win first place and $5,000 in the evolo Skyscraper Competition

A team of architects from Ukraine took top prize at a prestigious competition with a concept for a ‘living skyscraper’ shaped out of a grove of genetically modified trees.

The idea – which is only a theoretical concept at the moment -beat out nearly 500 other submissions from around the world and earned the team a $5,000 cash prize.

And while trees have never been used to develop anything on the scale of a skyscraper, the idea isn’t all science fiction.