Builders claim they are being held to ransom by their bosses and forced to go to work as pressure mounts on the Prime Minister to shut down all construction sites.

Mr Johnson was bombarded with calls to put a halt to all non-essential construction projects during Prime Minister’s Questions yesterday.

But after London Underground trains and building site canteens were pictured packed with workers, employees have hit back saying they are being ‘blackmailed’ into going in.

One builder tweeted a video of a crowded site yesterday with the caption: ‘How can this be happening and how can companies blackmail you to work. If you don’t come in it’s disciplinary or no money.’

The UK’s main house builders Bellway, Persimmon, Barratt and Taylor Wimpey have all decided to stop working, but Redrow and Cairn Construction are still open. Work on the £18billion Crossrail project has also ground to a halt.

Last night the PM fell short of a complete ban, but warned workers to stay at home unless absolutely necessary – or more people will die.

Mr Johnson’s decision to keep some sites open has resulted in a furious row with his successor as London Mayor, Sadiq Khan.

Prime Minister Boris Johnson is facing mounting pressure to shut down all construction sites over concerns about social distancing and spreading coronavirus. Pictured on Monday: A busy canteen for builders in London 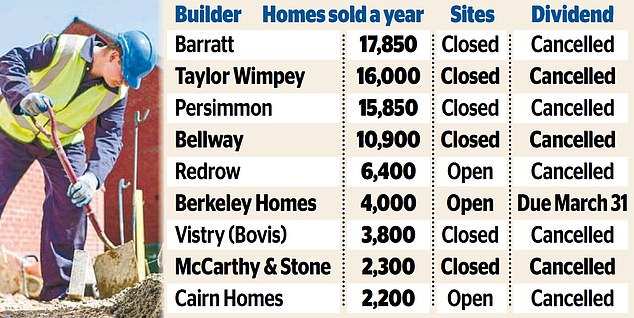 Mr Khan argues that while the London Underground should remain open for ‘key workers’, particularly those who work for the NHS, builders are taking up too much space on crowded Tube trains and should be forced to stay away.

‘You can’t keep a safe distance on sites so the virus will spread and more people will die. I’ve repeatedly asked ministers to ban non-essential work. We need action today.’

But Public Health England’s chief medical officer Professor Chris Whitty backed the PM, saying there has to be a ‘trade-off’ when it comes to such decisions.

Professor Whitty said action on construction has to be sustainable, as measures could be in place for a number of months. 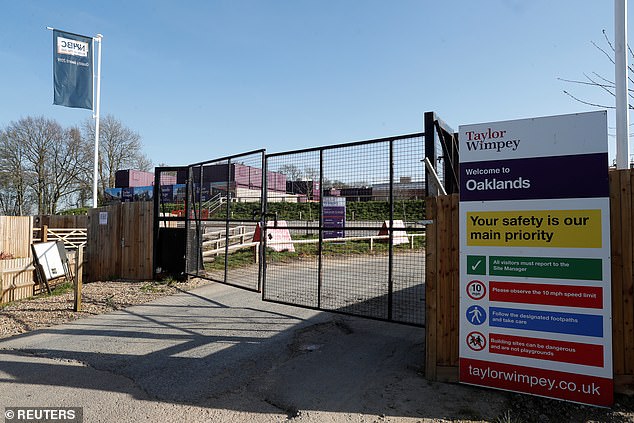 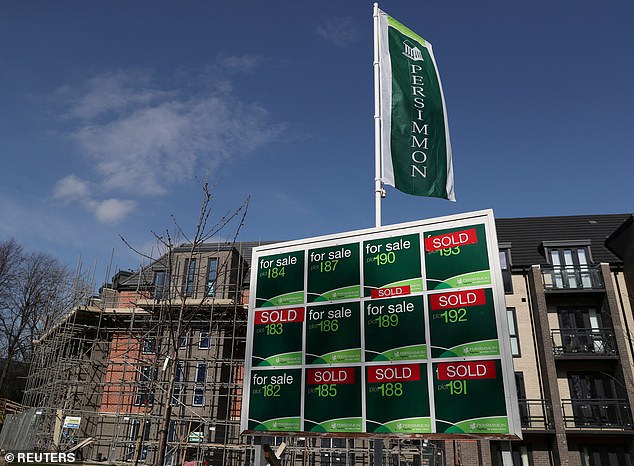 He said: ‘The modelling we have done was based on the idea that quite a lot of people would have to go to work as part of this.

‘We have to remember that many of the things we have to do are going to have to be sustained for a reasonably long period of time.

‘And broadly the more difficult you make it for people the less easy it is to sustain. So there is some degree of trade-off between those two things.’

At PMQs yesterday, Labour leader Jeremy Corbyn spoke of a self-employed construction worker who tested positive for the virus after being forced to travel to work by Tube.

He asked: ‘Can the PM be absolutely clear and give unequivocal guidance now that construction work on non-emergency work should stop now?’

Mr Johnson replied that some construction sites should continue to operate as long as social distancing – keeping six feet apart – is maintained.

A Number 10 spokesman later added that ‘further steps’ could be implemented as time goes on and that ‘nothing is off the table’ when it comes to COVID-19. 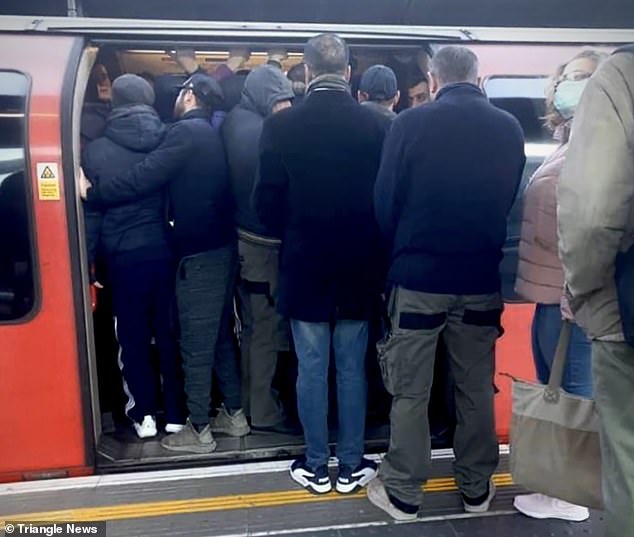 In London, Mayor Sadiq Khan argues that while the London Underground should remain open for ‘key workers’, particularly those who work for the NHS, builders are taking up too much space on crowded Tube trains (Central Line at White city seen on Wednesday) and should be forced to stay away 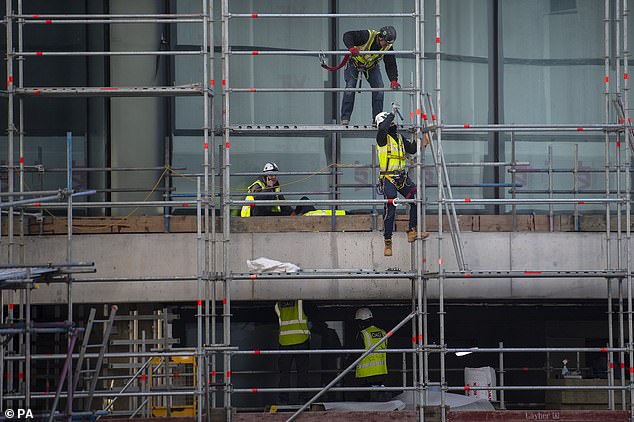 Construction workers are seen working at a site in Canary Wharf, east London on Wednesday

He dismissed the economic argument for continuing non-essential construction work and told BBC Newsnight: ‘When you’re in the middle of a global pandemic — health reasons alone really should be guiding all decision making.’

She spoke after workmen were pictured crammed into a portacabin at a development in Edinburgh yesterday.

Ms Sturgeon said: ‘Our advice right now is that we would expect construction sites to be closed unless the building that is being worked on is essential, such as a hospital.’

Housing and communities secretary Robert Jenrick told the BBC yesterday that construction workers should be going to work if their employers want them to.

He said: ‘If you can continue to operate safely within those guidelines then it’s sensible for you to do so.’

By James Gant for MailOnline

Housebuilders Persimmon and Bellway are shutting construction sites despite being exempt from the UK-wide coronavirus lockdown to help protect workers from the coronavirus.

Newcastle-based Bellway said it was closing its 200 building sites by the end of Friday, with site managers only allowed on to developments to maintain security or to hand over keys to buyers.

Charles Church builder Persimmon confirmed it is also starting an ‘orderly shutdown’ of its construction sites, following the lead of rivals Taylor Wimpey and Barratt Developments.

It comes as pressure is mounting on Prime Minister Boris Johnson to order all non-essential construction work is halted amid worries workers travelling to sites will hamper efforts to stop the spread of coronavirus.

Persimmon said it would continue with essential work only, making partly-built homes safe, where otherwise customers could be left in a vulnerable position. 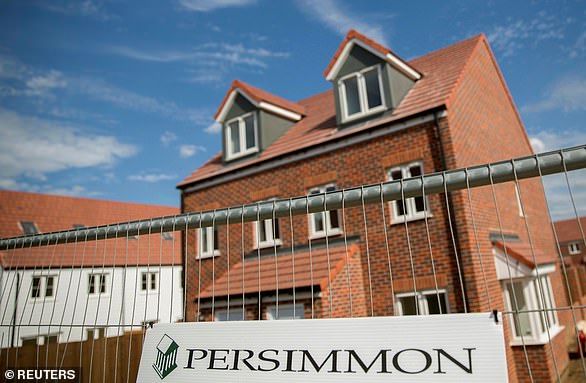 Bellway has already shut its sales offices and Persimmon is closing its sales network from Thursday, offering telephone and online-only customer support.

Bellway chief executive Jason Honeyman said the decision to shut its construction sites in spite of being exempt from the Government-imposed lockdown came due to fears for worker safety.

He said: ‘We weren’t convinced we could police the social distancing or keep workers two metres apart at sites. There’s always some people who ignore it.’

He added the group was also unable to get materials as builders’ merchants are closed and there are no deliveries.

Builder Redrow said on Tuesday its sites would remain open, tough it insisted there were ‘strict precautions in place including enhanced levels of cleaning, additional hygiene facilities and social distancing’.

Retirement home specialist builder McCarthy & Stone confirmed on Wednesday it was pausing developments – but would keep open some sites that are nearly done. 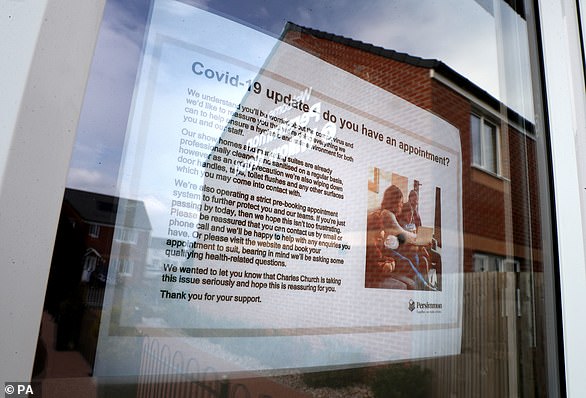 A sign is pictured at Persimmon’s offices in Larbert, Scotland

In its half-year results, Bellway cautioned it expects buyer demand to ‘almost cliff edge’ as the UK locks down.

The group said sales have plunged by around 40 per cent this week as strict new social distancing measures came into effect with cancellation rates also more than doubling to around 30 per cent.

Mr Honeyman said: ‘I would expect it [sales declines] to continue beyond that and almost cliff edge.’

Persimmon also warned it was ‘preparing for a significant delay in the timing of legal completions, a rise in cancellation rates and a material slowdown in new sales’.

Interim figures from Bellway showed a 7 per cent fall in pre-tax profit to £291.8 million for the six months to January 31.