Buffalo Mayor Byron Brown has said the 75-year-old man who was shoved to the ground by two cops on Thursday was an ‘agitator’ who tried to work up the crowd and had been asked to leave the area ‘numerous’ times.

Brown addressed the incident in a press conference on Friday after 57 officers on the Emergency Response Team resigned from their positions in support of their two colleagues who were suspended without pay after video showed them pushing protester Martin Gugino and causing him to fall and hit his head.

Gugino, a longtime peace activist from Amherst, had been at a protest at Niagara Square near Buffalo City Hall when he approached a line of officers in riot gear after the city’s 8pm curfew went into effect.

‘What we were informed of is that that individual was an agitator. He was trying to spark up the crowd of people. Those people were there into the darkness. Our concern is when it gets dark, there is a potential for violence,’ Brown said.

‘There has been vandalism, there have been fires set, there have been stores broken into and looted. According to what was reported to me, that individual was a key major instigator of people engaging in those activities.’ 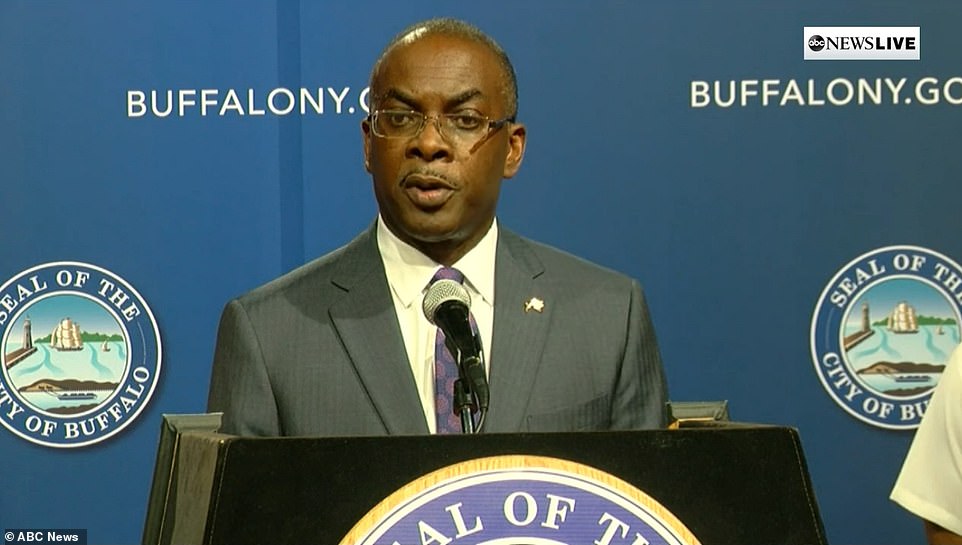 Buffalo Mayor Byron Brown on Friday said he would not call for the cops’ termination ahead of the investigation, saying it was important they get ‘due process’

The mayor said he will not call for the two officers to be fired amid the ongoing investigation, adding it was ‘very important they get due process.’

He also addressed the police department’s initial statement on the incident which said Gugino had ‘tripped and fell.’

‘I will be the first to say that initial communication was an error, but it was a desire to respond to media inquiries really quickly and to provide information to the community quickly,’ he said. 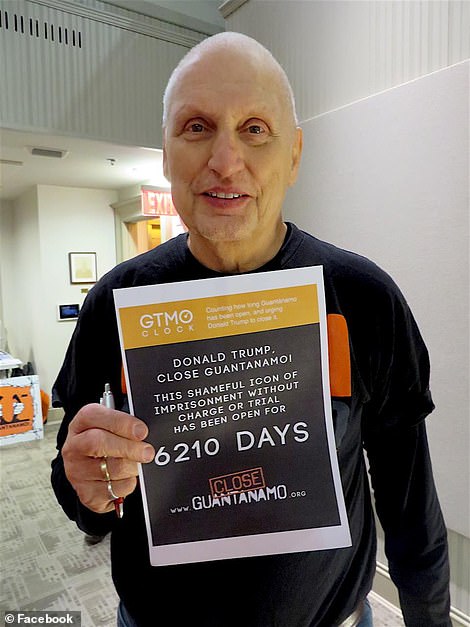 When asked about the 57 members who resigned, he said the city had ‘contingency plans’ and assured ‘Buffalo will be safe this weekend.’

Earlier, the Buffalo Police Benevolent Association confirmed to the Investigative Post that all members of the department’s Emergency Response Team have since resigned.

‘Fifty-seven resigned in disgust because of the treatment of two of their members, who were simply executing orders,’ PBA president John Evans said.

The 57 officers have not resigned from the Buffalo Police Department – only the Emergency Response Team they were serving on.

It comes after Erie County District Attorney’s Office revealed it was investigating the officers for potential criminal liability.

‘The Erie County District Attorney’s Office continues to investigate the incident captured on video outside City Hall Thursday evening that resulted in the injury of (a) protester,’ a spokeswoman for the office said in a statement on Friday.

Gugino is in serious but stable condition at Erie County Medical Center following the altercation with the officers, which left him lying in a pool of his own blood on the sidewalk in front of City Hall.

The incident, which comes amid nationwide protests against police brutality, has prompted calls for the officers involved to be fired. The police department has also been criticized over its initial statement claiming the man had ‘tripped and fell.’ 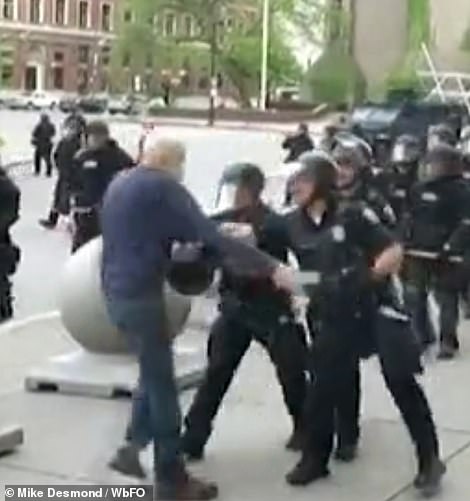 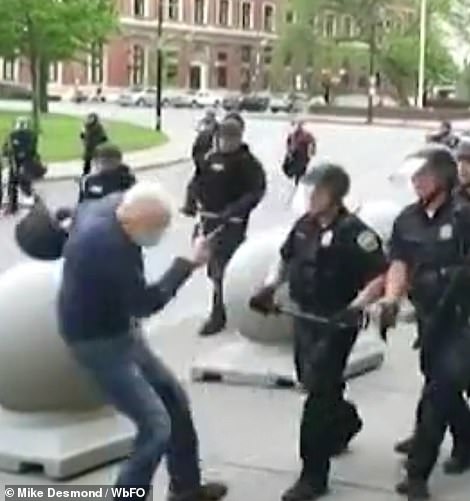 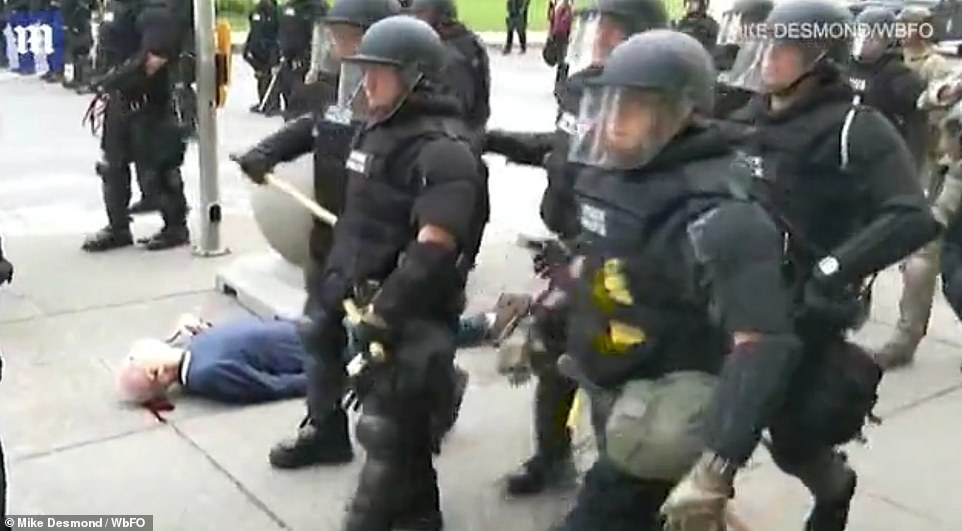 Earlier today, New York Governor Andrew Cuomo called for criminal charges to be made against the officers.

In his daily press briefing Friday morning, Cuomo played the shocking footage which he said made him feel ‘physically sick’ in the same way the horrifying state death toll from the coronavirus pandemic has hit him over the last 90 days.

The governor called for the city to fire and charge the two cops responsible for the attack on the elderly man and urged authorities to move quickly.

‘I think the city should pursue firing and I think the DA should look at the situation for possible criminal charges and I think that should be done on an expeditious basis,’ he said.

Cuomo urged officials to learn from the handling of George Floyd’s death in Minneapolis where authorities were slammed for moving too slowly in bringing charges against the officers who killed him, sparking outrage across America.

‘We saw in Minneapolis that people want answers and they want accountability and they want it quickly,’ said Cuomo. ‘The wheels of justice move slowly – they don’t have to.

‘I would encourage the DA to not do what happened in Minneapolis, which was the delay itself caused issues.’

He pointed to mistakes made where the Minneapolis authorities suggested evidence would lead to the cops involved in Floyd’s death not facing any charges.

‘When the DA said initially ‘there’s other evidence that suggests something else’… people don’t want vaguery… they’re upset, angry and frustrated… I would encourage the DA to move quickly and fairly and I think the mayor and police chief should pursue firing,’ he added. 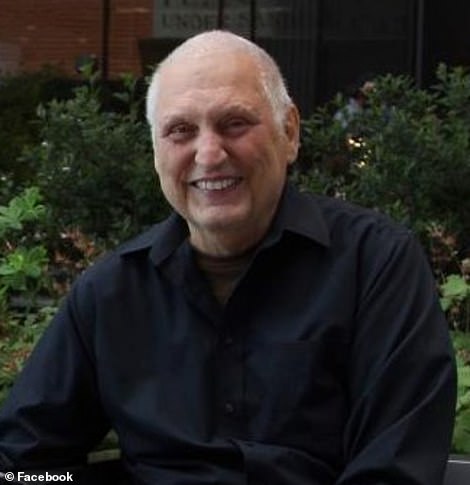 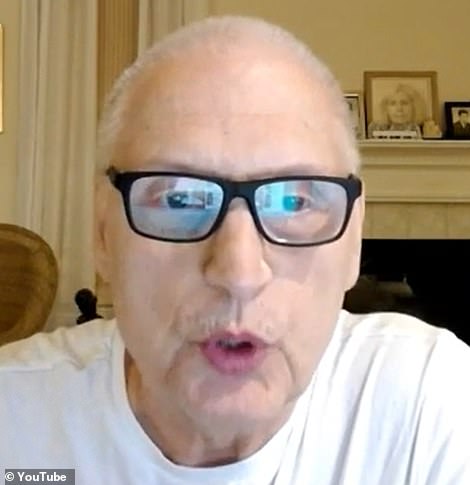 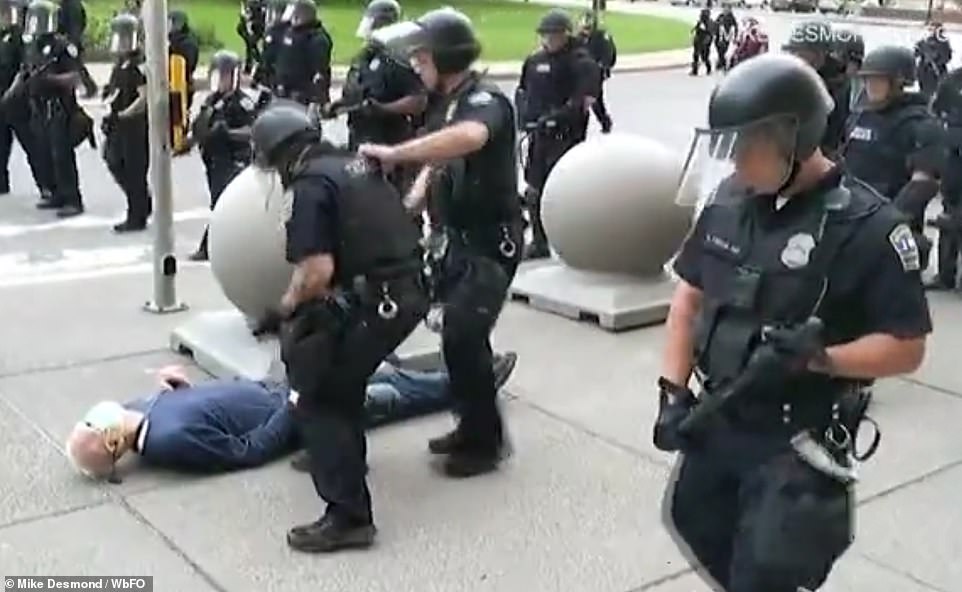 Many of the officers continued marching, while two cops leaned over to check on the man

‘The mayor suspended those two cops quickly and I respect that.’

The governor also slammed the actions of the several other officers who ignored the man and kept on walking by as he lay unconscious and bleeding on the sidewalk.

‘Where was the threat and then you just walk by the person when you see blood coming from his head and the police officers walk by. It’s fundamentally offensive and frightening,’ he said.

Cuomo said he he had spoken with the elderly man about the incident.

‘I just spoke with Mr Gugino on the phone – who is that gentleman – who thankfully is alive,’ the governor said.

‘But you see that video and it disturbs your basic sense of decency and humanity,’ Cuomo said.

‘Why was that necessary? Where was the threat?’

‘Who are we and how did we get to this place?’ he asked, before reeling off a list of horrifying incidents over the last week including cops pushing the press, police being hit with bricks and officers being violent toward protesters.

Cuomo’s outrage comes as Gugino’s friend Terrence Bisson told Buffalo News the 75-year-old is a peaceful activist who has campaigned against several issues including nuclear disarmament, the detainment of migrant children, climate change and Guantanamo Bay.

Bisson said the elderly man, who has a YouTube channel where he discusses such issues, would ‘never resist physically any kind of orders’.

‘He’s a gentle person who really believes that he must stand up for what he thinks is right,’ he said.

‘That’s why he went to the demonstration. He would never resist physically any kind of orders,’ Bisson said. ‘He’s a bit frail, not because of his age. He has some health problems.’ 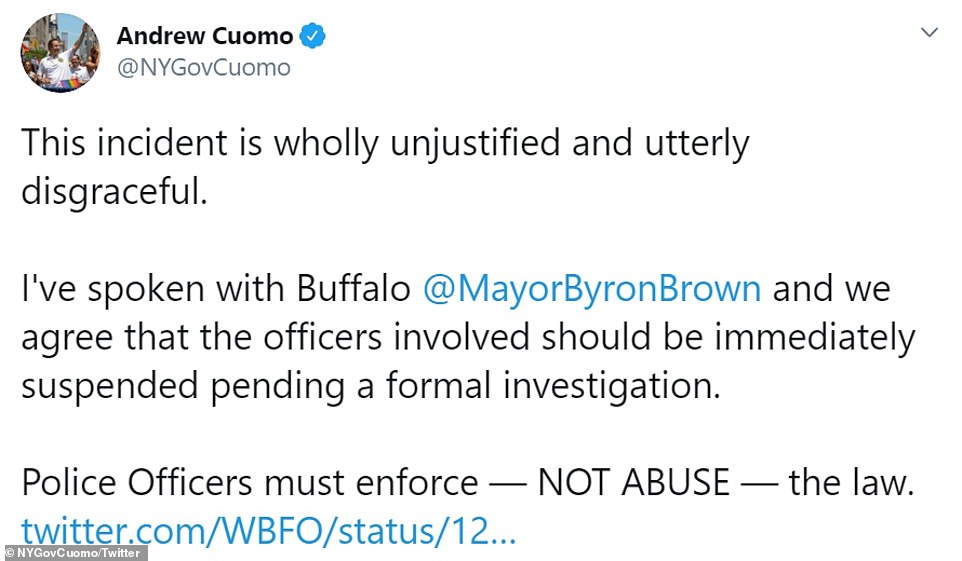 The shocking footage of Thursday night’s incident has sparked outrage as protesters continue to gather across the US demanding an end to police brutality following the death of George Floyd in police custody last week.

The video, which was taken by a reporter from local radio station WBFO, shows Gugino approaching a line of officers in riot gear outside Buffalo City Hall after the city’s 8pm curfew on Thursday.

As he tries to speak to the officers, they immediately begin shouting at him to move along, before one of them pushes him with a baton and a second cop shoves him with his hand.

The elderly man is then seen staggering before falling back and hitting his head on the sidewalk.

The sound of a crack is heard and then blood is seen pouring from his head.

In the horrifying scenes, most cops ignore Gugino who lies unresponsive and bleeding on the ground and keep marching past.

The cop who pushed him with a baton is seen pausing to lean over him, before he is motioned away by another officer.

Someone is then heard calling for a medic for the man.

Gugino was taken to the hospital where he is still being kept in a serious but stable condition Friday morning.

Mayor Brown slammed the incident saying he was ‘deeply disturbed by the video.’

‘Tonight, after a physical altercation between two separate groups of protesters participating in an illegal demonstration beyond the curfew, two Buffalo Police officers knocked down a 75-year-old man. The victim is in stable but serious condition at ECMC,’ he said in a statement late Thursday.

‘After days of peaceful protests and several meetings between myself, police leadership and members of the community, tonight’s event is disheartening.’

The officers were said to have been heading to clear Niagara Square where protests were taking place.

The video has been widely shared on social media, with many calling for the police officers to be fired.

MSNBC correspondent Joy Reid was among those who expressed outrage over the police officers failing to help the man as he lay on the ground.

‘The rest just step over him while one calls it in. And then they grab another protester. What country is this and what century?’ she tweeted.

Actor Kumail Nanjiani also criticized the Buffalo Police Department’s initial claim that the man tripped and fell, suggesting the cops would have likely gotten away with their actions if video hadn’t emerged.

It comes as the NYPD, as well as police officers across the country, have come under fire for using excessive force on people protesting peacefully.