Perhaps it is understandable that the French-Moroccan billionaire stalking BT was, until recently, unknown to most Britons. One of the most powerful businessmen in France and regarded by some as an ally of President Emmanuel Macron, Patrick Drahi had built up his sprawling empire while barely troubling the UK.

But in the past year he has exploded on to the scene, ruffling feathers not only in the telecoms industry and stock market, but with senior figures in Whitehall.

Last week, Ministers extended an investigation into his interest in BT, already under way for seven weeks. That is unlikely to trouble a man so clearly used to biding his time.

Plugged in: Patrick Drahi is now the biggest single shareholder in BT

Drahi, worth an estimated £5billion, has spent three decades building up his vast network of companies across France, Israel, Luxembourg and beyond.

The Mail on Sunday can this weekend reveal his entrepreneurial endeavours stretch back to the early 1990s when he was awarded a mandate for the launch of a cable network in Beijing.

He slowly built his expertise, first advising European cable firm UPC on its acquisitions strategy, then creating his company, Altice, in 2001. But analysis of his business journey suggests it has only been in the past decade that his group reached a significant global scale.

At first largely limited to France, Altice has in more recent years used the availability of cheap debt to snap up rivals in Europe and the US to build the $11.7billion (£10billion) behemoth of today.

Not much is publicly known about Drahi, who also owns auctioneer Sotheby’s. But in France he remains a significant influence. He has stakes in venerable Left-wing daily Liberation, co-founded in 1973 by French philosopher Jean-Paul Sartre, and magazine L’Express.

He has also been described as a ‘friend’ of Macron. Drahi’s firm was also forced to respond to reports in 2016 linking him to the Panama Papers – a giant leak of private financial information on offshore holdings – with the telecoms mogul’s people issuing a fierce rebuttal of any wrongdoing at the time.

Other analysis also shows how Drahi’s vast business empire has spawned firms in other tax-friendly vicinities such as Luxembourg and Guernsey. Again, there is no suggestion of impropriety.

But there is growing interest in his activities ever since Business Secretary Kwasi Kwarteng confirmed an investigation into Drahi’s stake in BT. 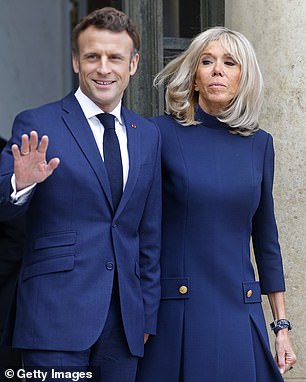 The group, formerly known as British Telecom, provides the UK with its internet and telecom services through its fibre infrastructure company Openreach, as well as owning mobile network EE and providing security software. It also provides service contracts across Government departments and it is understood to be used by Britain’s security forces. Altice Europe increased its stake in BT from 12.1 per cent, first declared just over a year ago, to 18 per cent in mid-December, making it the single biggest shareholder.

At that stage Drahi said he did not plan to buy the business outright.

But his interest has sparked widespread speculation that he may still launch an £18billion takeover of the national asset, which is listed on the London Stock Exchange.

A Government source said BT, Britain’s largest telecommunications provider, is the ‘exact kind of critical infrastructure’ that national security legislation is meant to protect. It is not yet clear what issues are being investigated by officials, but it is understood intelligence is being shared across different ministerial departments.

Only last week the investigation was extended amid reports the Government had requested more information about the situation – piquing interest.

It is almost certain the Government would intervene in any takeover attempt. The most drastic outcome could even include Kwarteng forcing Drahi to sell his existing shares, City sources suggested.

The billionaire has a reputation for slashing costs. He was once described by the Financial Times as the ‘king of cost cutting’.

The newspaper said suppliers to SFR were asked for big discounts after he bought the French telecoms giant. It is unclear if concerns about such strategies, or the potential use of debt in any acquisition of BT, form part of the Government’s worries.

One City lawyer described the purpose of the investigation as a ‘mystery’, but said the recent delay means there ‘must have been some issues it wants to work through’.

He said: ‘That can make you rich when it works, but is it the approach for a strategic national asset?’

Sources said the Government might impose conditions on Drahi keeping his existing stake. At the very least, he has found himself on the Government’s radar – and he is likely to remain there until his long-term intentions become abundantly clear.