BT customers calling its helpline are routinely being forced to wait on hold for three quarters of an hour — or longer.

Dozens have taken to social media to voice their frustration, and readers have contacted Money Mail to complain.

When we tried to get through to BT’s customer service line just after 4pm on Monday, an automated message said wait times were in excess of 45 minutes. It took 50 minutes before our call was finally answered.

On hold: Readers have been struggling to contact BT over faults with broadband and landlines, as well as to cancel or renew contracts

Yesterday morning, the automated message said: ‘We’re very busy at the moment. If your call is not urgent, please call back later.’

It took 55 minutes to get through.

BT appears to have had issues with overwhelmed call centres for a number of days now.

The call agent we spoke to said the company had experienced high call volumes for the past week or so due to broadband outages caused by the wet weather.

BT’s sluggish response times come amid fears that its customer service could take a hit in a major cost-cutting drive.

Chief executive Philip Jansen last week announced plans to save £3 billion by the end of 2025, warning of job losses and increased efforts to ‘automate and use technology to… reduce costs’.

Readers have been struggling to contact BT over faults with broadband, as well as to cancel or renew contracts.

Sophie Jefferson, 49, spent 57 minutes on hold to BT on Monday evening after an engineer didn’t show up to fix her broken broadband connection.

The operations manager from London had been waiting since October 28 for a repairman to visit. She had been sent a mini hub — a temporary Wi-Fi connection device — in the meantime to ensure she had the internet.

However, after receiving an email saying her case was closed and the hub would be switched off, she was clueless as to what was going on.

After waiting nearly an hour to speak to someone at the BT customer services centre, they confirmed that the engineer had been cancelled without her being notified.

Sophie says: ‘The call handler gave me a rearranged date, but couldn’t confirm that the engineer would definitely turn up then. She told me that if they didn’t, I should just call BT back.

‘I said, ‘You’ve got to be joking. I’m not going to spend another hour trying to get through.’ ‘ 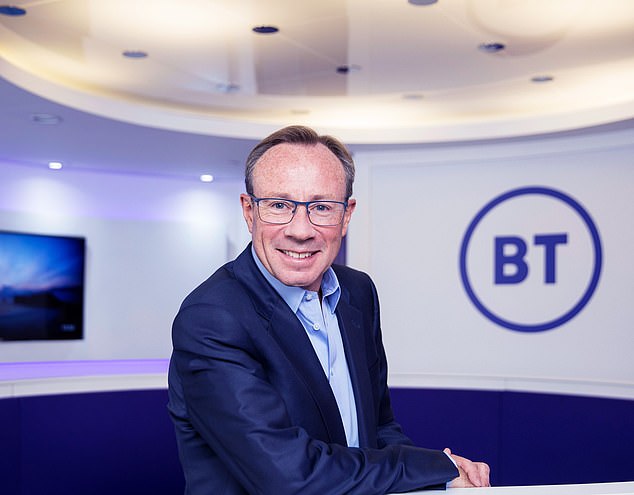 Cuts: BT chief exec Philip Jansen has announced plans to save £3bn by the end of 2025, warning of job losses and increased efforts to ‘automate and use technology… to reduce costs’

Debbie Johnston, 51, was left on hold for more than 50 minutes on Monday night while trying to get her broadband fixed, too. The wedding dress saleswoman, from Northern Ireland, has found it near-impossible to work from home.

She had also previously rang on November 3 and waited 45 minutes to report the same problem. ‘A company like BT should at least have a queuing system,’ she says.

‘It should let you hang up and keep your place in the queue while you wait for a callback when someone is available.

‘I understand that the firm is extremely busy, but then it should get more staff. We’re all extremely busy — who has got time to sit and wait that long?’

Rick Harris, from Peterborough, couldn’t get through to BT when he needed to renew his broadband contract.

The 57-year-old was quoted a wait time of half an hour on the phone. He resorted to using BT’s online chat service — only to find it was unavailable at 3pm on Saturday, October 29.

The healthcare researcher says: ‘I genuinely do not feel that BT is acting in customers’ best interests. The company is overwhelmed and understaffed.’

Money Mail is calling for big businesses to be penalised if they do not answer the phone within ten minutes as part of our Pick Up Or Pay Up campaign.

Currently, there are no consequences for companies who fail to do this. We are demanding consumer protection laws be updated.

Similar legislation was approved in Spain earlier this year. Firms there now face fines of up to £85,000 if they do not answer their phones within three minutes.

Last month, our campaign took a major step forward after the case for a new law was presented for debate in Parliament by Conservative MP Robert Halfon.

A BT spokesman insisted that its cost-cutting drive would not result in any job cuts in call centres.

The spokesman added: ‘We handle 100 per cent of customer calls in the UK and Ireland and we aim to answer calls within 60 seconds, but we’re very sorry that our customers are having to wait longer than usual to speak to a UK-based adviser.

‘We’ve hired more than 3,000 advisers across the UK this year so we can continue to provide the most personal and local service to our customers.’

BT says there are plans afoot to launch a virtual queue service.

Spare me the cheesy tunes!

Oh BT. When Money Mail launched its Pick Up Or Pay Up campaign earlier this year, we spent hours calling major firms at all times of the day to show just how long customers were being forced to wait to speak to a human being.

At the time, BT was furious it had been included in our table, claiming its average wait time was just two minutes.

And, to be fair to the telecoms giant, it was by no means the worst offender — until now, it seems.

Take my own experience. I’m moving abroad and have had to call more than a dozen financial firms over the past week.

Call wait times have ranged from mere seconds (thank you, Admiral) to upwards of half an hour (Esure among others).

But BT really took the biscuit.

I first tried to call its cancellation number on a Tuesday at around 6.30pm. I was warned of a 20-minute wait, at which point I gave up. The next evening, I tried again.

This time the estimated wait was 30 minutes. In reality, it was almost an hour. This is unacceptable for any business — but for a communications company, it’s laughable.

The customer service representative couldn’t tell me why the firm’s phone lines were so overwhelmed.

But it’s obvious something has gone wrong. BT needs to get a grip, and fast. And until it does, might I suggest it at the very least rethinks its hold music?

Listening to songs with lyrics such as ‘Give me your lovin’ all through the night’ for around an hour-and-a-half over two days really did nothing to improve my mood.