Bruno Guimaraes was in tears as he was forced to leave the pitch early after picking up an injury in the opening stages of Newcastle’s match against Fulham on Sunday.

The Brazilian midfielder rolled his ankle in the early stages of the game but tried to play on, receiving treatment from medical staff on two occasions.

However, as the half-time whistle blew a desolate Guimaraes had to be consoled by team-mates as the teams made their way down the tunnel. 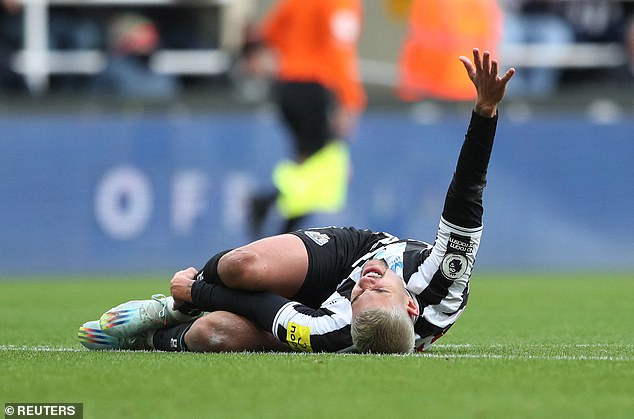 And it was soon confirmed he would be taking no further part in the match, which Newcastle went on to win courtesy of a late goal from Alexander Isak.

Guimaraes was later seen in crutches after full-time and manager Eddie Howe admitted that he is ‘worried’ about the injury.

The record signing headed Newcastle back into the Premier League’s top three after old boy Aleksandar Mitrovic had fluffed his lines for Fulham.

The £60million striker’s third goal for the club secured a hard-fought 1-0 victory at St James’ Park, but only after one-time Tyneside favourite Mitrovic had seen a successful penalty ruled out for a double contact. 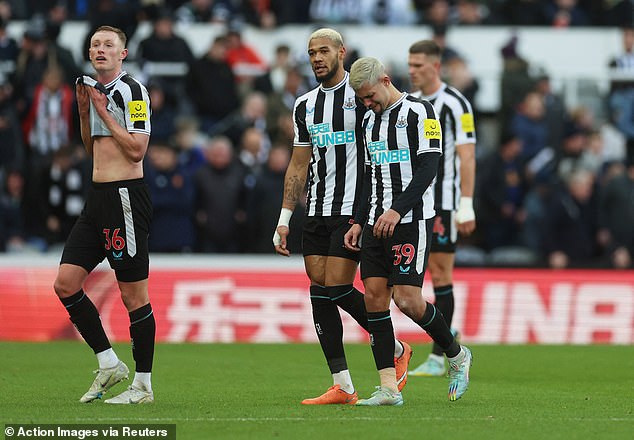 Eddie Howe’s men, who controversially included Joelinton in their starting line-up despite his midweek arrest for drink-driving, leapfrogged Manchester United back into third place in the table as a result of extending their unbeaten league run to 14 games.

Fulham, however, may feel hard done by after frustrating their hosts for long periods and threatening repeatedly on the counter.