The second day of the Commonwealth games has come to a close and there’s plenty to unpack.

Day three saw Adam Peaty beaten in the 100m breastroke for the first time in eight years, with countryman James Wilby claiming gold. But it was just one of many stories from another action-packed day.

Sportsmail‘s Riath Al-Samarrai looks at some of the biggest talking points surrounding the event.

Aussie swimming star Kyle Chalmers has threatened to quit the sport over stories of a love triangle rift between him and team-mates Emma McKeon and Cody Simpson.

Chalmers dated McKeon last year but she is now with Simpson, who is a pop star. Chalmers said: ‘My mental health from all of this is at rock bottom.’

England’s Fraer Morrow said she did not realise she had won a medal after taking bronze in the women’s 55kg weightlifting. ‘The coaches were like, “Ah, better luck next time”,’ said Morrow. ‘Then one of the ladies said, “How does it feel to be a bronze medallist?” And I was like, “What?”’

Gold made in lockdown

Crowhurst, 18, turned to open water swimming during lockdown as well as cycling and running when pools closed due to the Covid pandemic. ‘It’s been a really tough competition,’ she said.

Jessica Gordon-Brown admitted ‘a happy accident’ led to her pursuing weightlifting and claiming silver in the women’s 59kg final. She did judo and gymnastics before getting into weightlifting at Brighton University. Gordon-Brown, 26, said: ‘I’m built for it. I’m glad I stumbled into it.’ 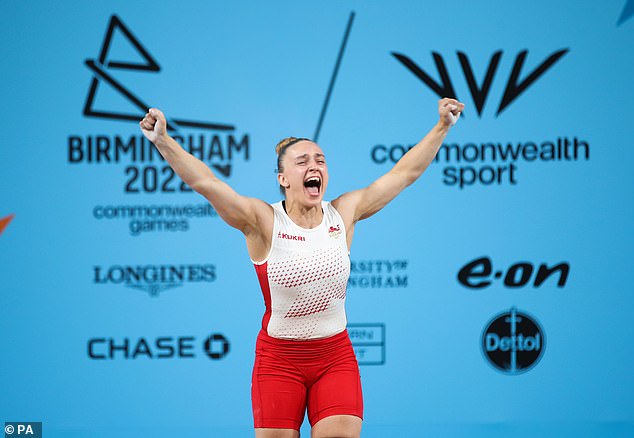 Scotland cyclist Neil Fachie had to settle for silver after Wales’ James Ball beat him in the men’s tandem B sprint final.

The 38-year-old would have set a Scottish record had he claimed a sixth Commonwealth gold. ‘Now I feel I have to come back in four years,’ he said. ‘I was hoping I could walk away!’

Sophie Unwinn finally enjoyed her medal moment, two days after she was cruelly denied a bronze because there were only four riders in her event.

The England para-cyclist took silver in the tandem 1000m time trial with pilot Georgia Holt. ‘This means so much to us,’ said Unwin.

England squash quarter-finalist James Willstrop is disappointed his sport is not getting more TV coverage as he defends his singles title.

Willstrop believes squash has been short-changed. He said: ‘People are tweeting: “Why isn’t it on?” It should be on. I’ve got a load of people asking if they can watch me.’