The prosecution and defence have both closed their cases in the trial of the former Liberal party staffer accused of raping Brittany Higgins.

Crown lawyers closed the case against Bruce Lehrmann on Tuesday after tendering a final police statement to the court, followed by the agreed statement of facts.

Ms Higgins, also a former Liberal party staffer, claims Lehrmann raped her in the parliamentary office of ex-defence minister Linda Reynolds early on March 23, 2019, after a night out in Canberra.

He has pleaded not guilty to a single charge of sexual intercourse without consent and is being tried in the ACT Supreme Court.

Justice Lucy McCallum read the agreed facts to the court, which stated that Lehrmann missed six phone from his girlfriend Alexandra between 2.16am and 2.18am on March 23, 2019 – the night Ms Higgins claims she was raped.

The agreed facts also said Ms Higgins did not make a doctor’s appointment between March 1 and April 31, 2019.

‘If a patient was to not attend, that booking is usually still recorded,’ the judge read to the court.

Justice McCallum said the case for the accused was also over on Tuesday morning.

‘You’ve now heard all the evidence you’ll hear in this trial,’ she told the jury.

Crown prosecutor Shane Drumgold then began his closing statements, telling the jury the case was not about ‘political movements, political parties and it’s not about workplace cultures’. 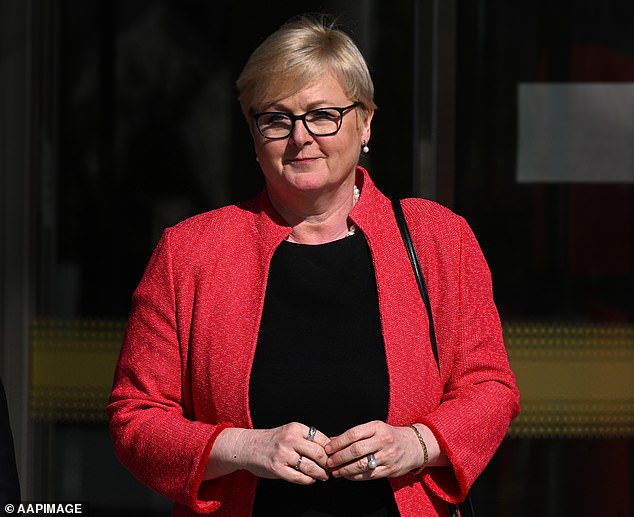 Senator Linda Reynolds was called as a witness for the prosecution in the ACT Supreme Court trial, but admitted to texting a defence lawyer while Ms Higgins’ was being cross-examined.

‘[The case is not about] whether young people, whatever gender, have the right to drink what they choose or to be safe. Or whether Ms Higgins likes Linda Reynolds, or about whether parliament house responded adequately,’ he said.

‘This case is certainly not about the experience of other women in parliament or the ‘me too’ movement, media interviews or book deals.’

Mr Drumgold said the case was about ‘what happened on a couch in a room’ on March 23, 2019, between when Ms Higgins and Lehrmann entered parliament at 1.48am and when the accused left alone at 2.31am.

Mr Drumgold told the jury anything Ms Higgins said or did after that date had no bearing on her credibility, and asked them to ‘stand back’ and look at why Ms Higgins would risk her ‘dream job’ over a fabrication.

‘This is a young lady in the middle of powerful political forces, and we say she was right to be cautious,’ he said.

He said ‘there are strong political aspects to this case’ and referred to Ms Higgins’ former boss Fiona Brown – who was then chief-of-staff for Senator Reynolds – becoming emotional in court over a text she received from Ms Higgins.

‘Fiona Brown was clearly emotionally invested to the point where her emotions got the better of her,’ Mr Drumgold told the jury.

Mr Drumgold said Lehrmann gave various reasons for going back to parliament on the night of the alleged rape, but said he reject all reasons – ‘except possibly to drink alcohol and get the drunk and vulnerable complainant alone in a room’.

‘It was the most convenient place to get her drunk and confused… in the hope she would not resist and not remember,’ he told the jury.

He said Lehrmann claimed in his record of interview that there was no alcohol in the office because Ms Reynolds was new in the defence portfolio and it was not yet set up.

However, former colleague Nicole Hamar told the court last week she worked with Lehrmann in Home Affairs and he had a sizeable amount of alcohol in his office.

The prosecution said it was ‘unlikely he would throw out a substantial amount of alcohol because he moved offices’.

Mr Drumgold also brought up the timing of Lehrmann’s departure from Parliament House – he said he left the minister’s suite because an Uber he ordered had arrived.

However, the prosecutor said, security footage and phone records showed the Uber did not arrive for at least three minutes after he left parliament house.

It comes after a dramatic day in court on Monday, when Senator Reynolds was called to the witness stand and accused of trying to interfere in the trial by requesting a copy of Ms Higgins’ transcript of evidence from Lehrmann’s defence lawyer.

The message read: ‘Hi do you have the daily transcripts? If so, are you able to provide my lawyer?’

She sent another text one minute later: ‘Also if you have text messages between Brittany and Nicky they may be revealing.’ 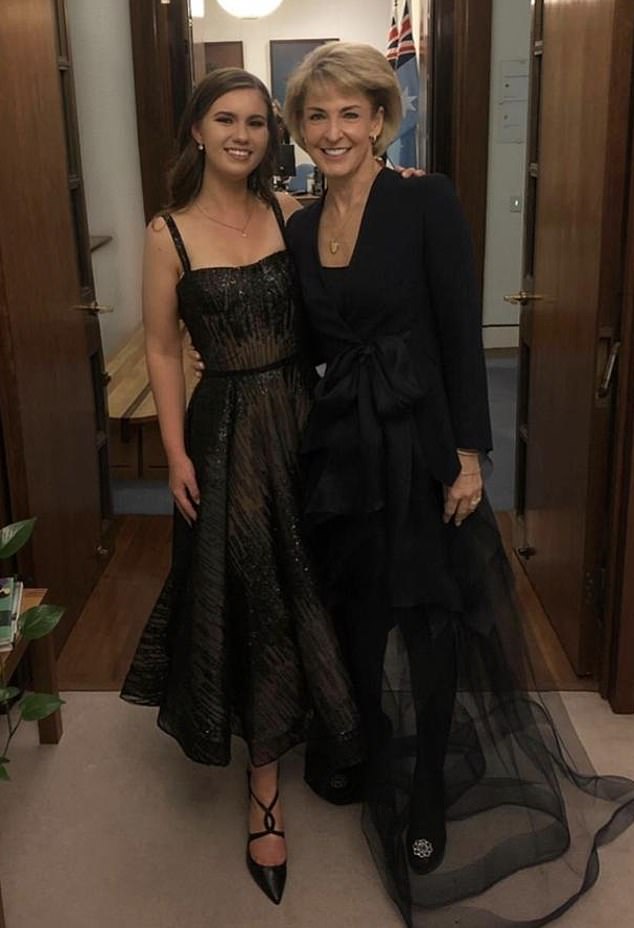 ‘Nicky’ refers to Nicole Hamar, who was called to the witness stand last week.

Ms Reynolds was called as a witness for the prosecution, but she admitted to texting the defence lawyer while Ms Higgins’ was being cross-examined.

She told the court that she was not seeking to coach the cross-examination of her former staffer, she was simply ‘curious’ about what had been said in court.

Advised by her lawyer that it was ‘inappropriate’ to access a transcript, Senator Reynolds said she did not receive one.

The former defence minister also told the court she thought a message exchange between Ms Higgins and Ms Hamar might ‘shed some light’ on the allegations.

He put to Senator Reynolds that if she was motivated enough to attempt to interfere when there was not an election on the horizon, her dominant concern when Ms Higgins first raised the complaint in 2019 would have been the impending election.

‘Absolutely not. I categorically and utterly reject that assertion,’ Senator Reynolds said.

She was also asked why her boyfriend was sitting in the back of the courtroom during the first week of the trial, but told the court he did not give her any information about what was happening in court.

Senator Reynolds also denied knowing details of Ms Higgins’ claims when she met with her about a week after the alleged rape.

She said that, at the time, she only knew about the security breach resulting from two staffers – Lehrmann and Ms Higgins – accessing the ministerial suite after hours.

She also recalled Ms Higgins saying she ‘couldn’t remember what happened’ during the meeting – which was held in the office Ms Higgins alleges she was assaulted in.

‘She said she woke up the next morning and got dressed. It was at that point that she was a little more distressed and at that point I thought, I’m not the right person to be talking,’ Senator Reynolds told the court. 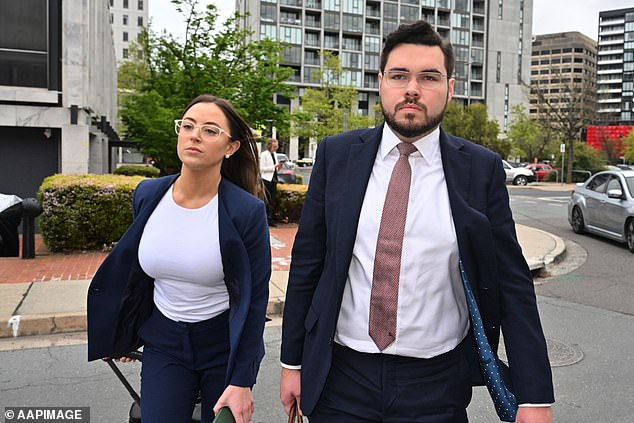 Bruce Lehrmann is pictured arriving in ACT Supreme Court on Tuesday morning. He has pleaded not guilty to sexually assaulting Ms Higgins

‘If she can’t remember what happened, she’s distressed and getting dressed, I said to her – I’m not the person to be having this conversation.

‘I knew we had (Australian Federal Police agent) in the building so I suggested to her that she might rather have this conversation with someone more qualified.’

When speaking about what she knew about Ms Higgins’ claims in the weeks following, Ms Reynolds told the court she learned about most of the claims on February 15, 2019 – when The Project and News Corp ran stories about the alleged rape.

Ms Higgins had worked for both politicians that year – first for Ms Reynolds as an assistant media adviser, and then moving to Ms Cash’s office that same year.

Ms Cash told the court that Ms Higgins was concerned the security breach would be made public because the inquiry was from a journalist from the Canberra Times.

‘She was embarrassed because it was in relation to herself and a security issue,’ Ms Cash said.

‘She and another staff member returned to the office after drinking … They were potentially intoxicated.

‘Ms Higgins fell asleep on the couch and I believe security found her the next day.’

Ms Cash denied knowing about any sexual assault allegations prior to February 5, 2021.