The Brooklyn Nets have announced the suspension of point guard Kyrie Irving for at least five games and the Anti-Defamation League have rejected his proposed $500k after a car-crash media appearance on Thursday where he refused to apologize for linked to an anti-Semitic film on social media.

The team released an angry statement Thursday night saying the decision to suspend him stemmed from his lack of apology for posting a link on Twitter to a film deemed ‘venomously anti-Semitic’ when allowed to speak to the media Thursday.

‘We have decided that Kyrie will serve a suspension without pay until he satisfies a series of objective remedial measures that address the harmful impact of his conduct and the suspension period served is no less than five games,’ the Nets statement read in part.

‘We were dismayed today, when given an opportunity in a media session, that Kyrie refused to unequivocally say he has no antisemitic beliefs, nor acknowledge specific hateful material in the film. This was not the first time he had the opportunity – but failed – to clarify,’ the Nets said in a statement.

‘Such failure to disavow antisemitism when given a clear opportunity to do so is deeply disturbing, is against the values of our organization, and constitutes conduct detrimental to the team. Accordingly, we are of the view that he is currently unfit to be associated with the Brooklyn Nets.’

During a brief media appearance Thursday the 30-year-old Irving, who earns $40m a year, was questioned if he does possess any anti-Semitic beliefs, to which he responded: ‘Again, I’m going to repeat, I don’t know how the label becomes justified because you guys ask me the same questions over and over again.

When further pressed to provide a clear answer to the question, Irving claimed he ‘cannot be anti-Semitic if he knows where he comes from’. 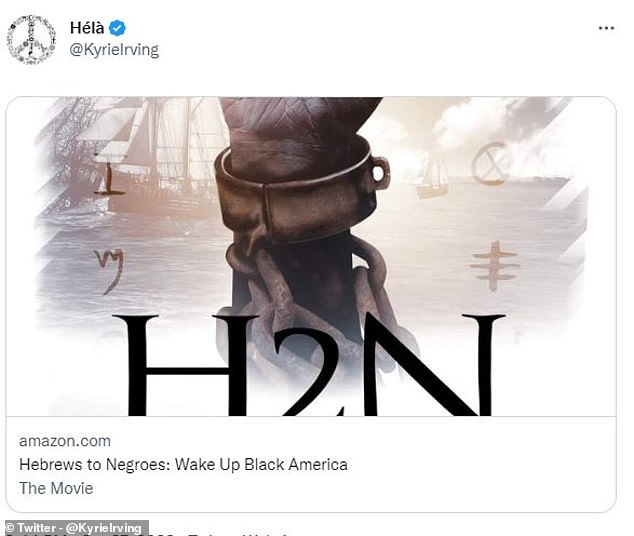 The Brooklyn Nets star caught the attention for publicizing the 2018 film ‘Hebrews to Negroes: Wake Up Black America’ on social media with a link to its Amazon page 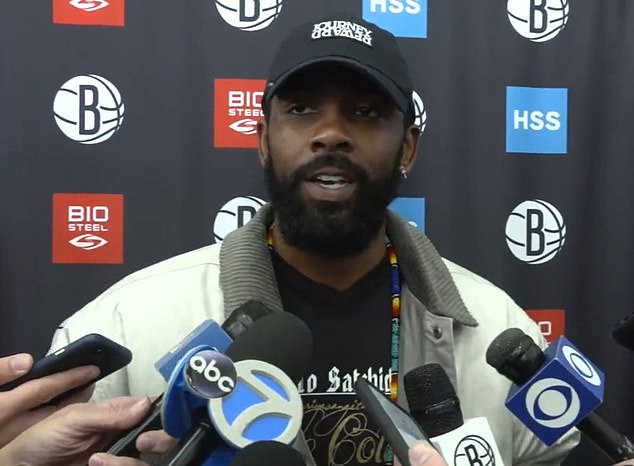 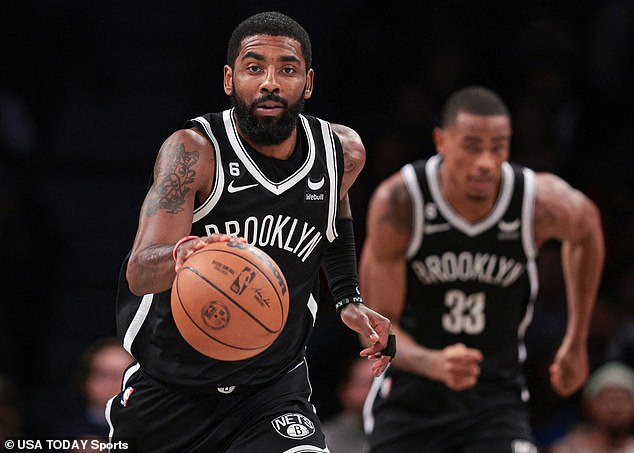 Irving seemed disengaged Tuesday vs. the Bulls as he scored just four points in a Nets loss

Over the last several days, we have made repeated attempts to work with Kyrie Irving to help him understand the harm and danger of his words and actions, which began with him publicizing a film containing deeply disturbing antisemitic hate.

We believed that taking the path of education in this challenging situation would be the right one and thought that we had made progress with our joint commitment to eradicating hate and intolerance.

We were dismayed today, when given an opportunity in a media session, that Kvrie refused to unequivocally sav he has no antisemitic beliefs, nor acknowledge specific hateful material in the film.

This was not the first time he had the opportunity – but failed – to clarify. Such failure to disavow antisemitism when given a clear opportunity to do so is deeply disturbing, is against the values of our organization, and constitutes conduct detrimental to the team.

Accordingly, we are of the view that he is currently unfit to be associated with the Brooklyn Nets. We have decided that Kyrie will serve a suspension without pay until he satisfies a series of objective remedial measures that address the harmful impact of his conduct and the suspension period served is no less than five games.

Irving angered many after posting a link to the Amazon page for the 2018 film ‘Hebrews to Negroes: Wake Up Black America’ last week.

The film is based on a 2015 book of the same name, which has been described as ‘venomously anti-Semitic.’ Specifically, it quotes Hitler to convince the audience about the existence of a Jewish plan for world domination.

It comes just a day after Irving and the Nets organization pledged to work with the Anti-Defamation League alongside individually donating $500k to causes that ‘eradicate intolerance.’

Irving’s most recent commentary at the news conference has seemingly undone his actions from the previous day in the eyes of Anti Defamation League CEO Jonathan Greenblatt.

‘The answer to the question ‘Do you have any anti-Semitic beliefs’ is always ‘NO’ without equivocation,’ Jonathan Greenblatt tweeted .

‘We took @KyrieIrving at his word when he said he took responsibility, but today he did not make good on that promise. Kyrie clearly has a lot of work to do.’

Greenblatt then later said he was rejecting the $500k donation from Irving. He said: ‘We were optimistic but after watching the debacle of a press conference, it’s clear that Kyrie feels no accountability for his actions. ADL cannot in good conscience accept.’

He then added on Twitter, in response to the latest Nets statement: ‘Good for Brooklyn Nets. Kyrie Irving has been given ample opportunity to do the right thing, apologize and condemn #antisemitism. He has failed at almost every step along the way. This suspension is well-deserved.’ 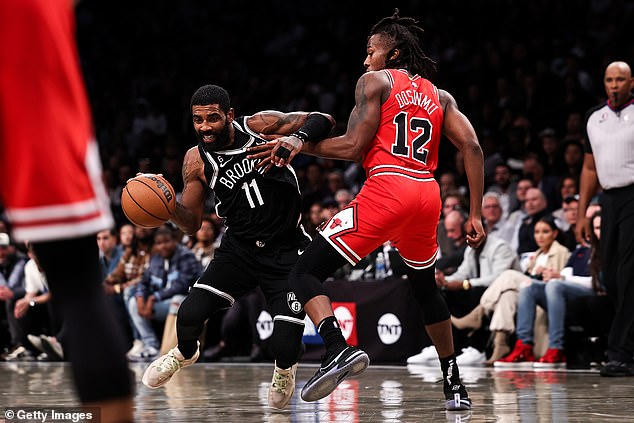 A day ago, a Nets statement said Irving would be making a $500k donation to the Anti-Defamation League 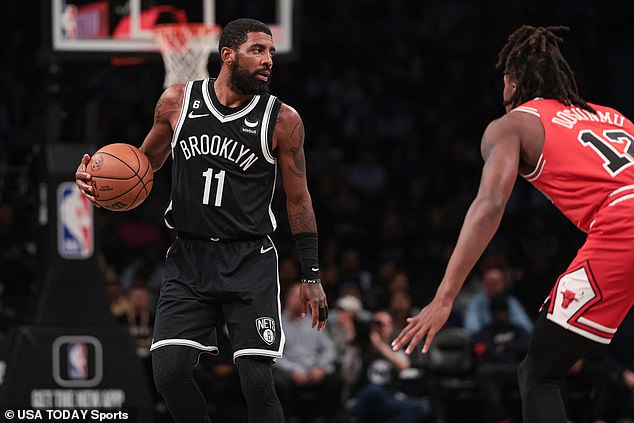 THE FILM IRVING LINKED TO

Irving posted a link to the 2018 film ”Hebrews to Negroes: Wake Up Black America’, based on a book of the same name. It was directed by Roger Dalton Jr.

The book was described as ‘venomously anti-Semitic’ by Rolling Stone. It claims ‘many famous high-ranking Jews have admitted to worshipping Satan or Lucifer’. Specifically, it quotes Hitler to convince the audience about the existence of a Jewish plan for world domination.

NBA commissioner Adam Silver also released a statement slamming him for a lack of an apology for sharing ‘vile and harmful’ material online.

Silver criticized the guard’s ‘reckless decision’ and revealed he intends to meet with the embattled star to discuss the situation.

The commissioner did recognize Irving’s agreement to work with the Nets and the Anti-Defamation League but expressed his disappointment that the player had not done more to publicly denounce the ‘vile’ content of the movie.

The full statement read: ‘Kyrie Irving made a reckless decision to post a link to a film containing deeply offensive antisemitic material.

‘While we appreciate the fact that he agreed to work with the Brooklyn Nets and the Anti-Defamation League to combat antisemitism and other forms of discrimination, I am disappointed that he has not offered an unqualified apology and more specifically denounced the vile and harmful content contained in the film he chose to publicize.

‘I will be meeting with Kyrie in person in the next week to discuss this situation.’

Irving did accept responsibility for his actions and accepted the film contained ‘questionable and untrue’ content but stopped short of offering an apology.

‘I take my responsibility for posting that. Some things that were questionable in there, untrue.

‘Like I said in the first time you guys asked me when I was sitting on that stage, I don’t believe everything that everyone posts.’

However, Irving stopped short of apologizing and when asked if he would do so, he said: ‘I’m not the one who made the documentary.’

Irving also appeared to hit back at reporters when asked if he was surprised that people were hurt by his actions. 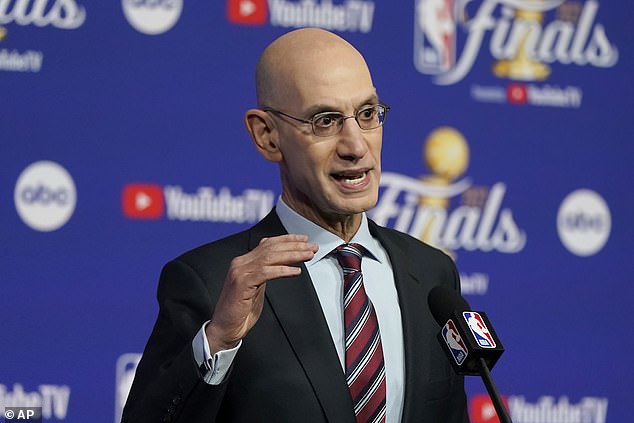 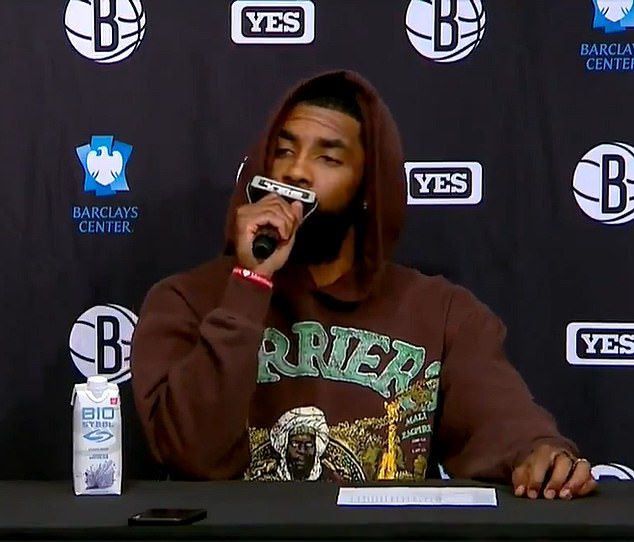 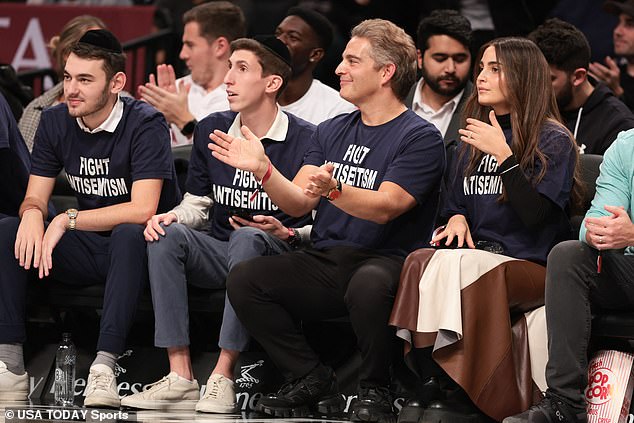 He asked back: ‘Where were you when I was a kid figuring out that 300 million of my ancestors are buried in America? Where you guys asking those same questions when I was a kid learning about the traumatic events of my familial history?

‘And why when I repeat myself that I’m not going to stand down it has nothing to do with dismissing any other race or group of people? I’m just proud of my heritage and what we’ve been through.

‘I’m not afraid of these mics, these cameras. Any label you put on me, I’m able to dismiss because I study. I know the Oxford dictionary.’

After speaking for six minutes, the press conference was cut short by a Nets PR staffer.

‘I’m not going to stand down on anything I believe in. I’m only going to get stronger because I’m not alone. I have a whole army around me.’

Irving was asked about his ‘promotion’ of the book/movie by ESPN’s Nick Friedell, which set off a testy exchange between the pair.

‘Can you please stop calling it promotion?’ Irving said. ‘What am I promoting?’ 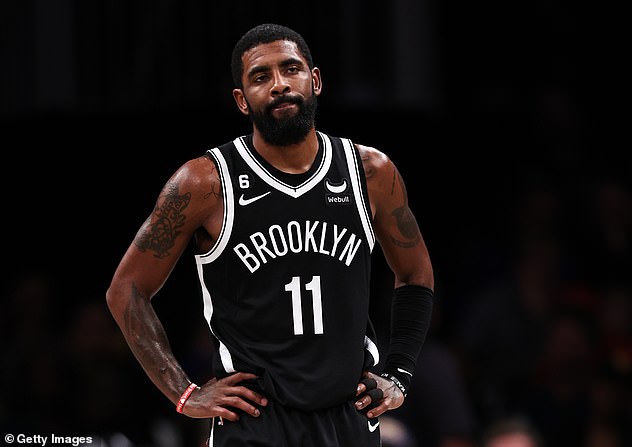 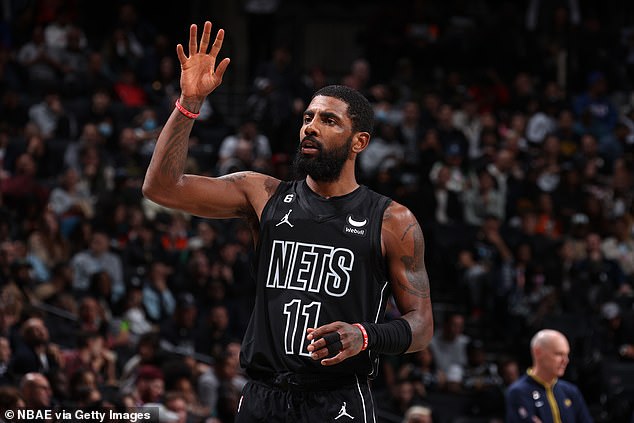 If Irving miss five games, his next Nets appearance will be on November 13 vs. the Lakers

The reporter tried to interject again but Irving continued to talk over him, saying: ‘Let’s move on. Don’t dehumanize me up here. I’m another human being. I can post whatever I want. So say that and shut it down and move on to the next question.’

Irving approached the fans and said, ‘Grateful for you guys,’ according to a Brooklyn fan.

In Tuesday’s game, Irving scored just four points as the Nets were beaten 108-99 by the Chicago Bulls.

If he serves only a five-game ban, it means his next game would be on Sunday, November 13 against the Lakers.