The budding chef gave his spin on a traditional roast dinner on Wednesday, whipping up aged beef that looked underdone with a side of carrots and potatoes.

Yet the 23-year-old TV personality was widely mocked over the Instagram video, with fans claiming the beef looked raw and that too much butter had been used to prepare the vegetables.

Fans were also left questioning how much the meal would have cost to prepare and whether the average person could afford to replicate it.

A raw deal? Brooklyn Beckham ‘splashed out £300’ on his ‘underdone’ beef roast and fans have blasted the budding chef for ‘spending more on one meal than families do in a week’

Butchers told MailOnline that the meat appeared to be a five kilo cut of 28 day dry aged sirloin which would be worth between £200 and £300 at a meat market.

Brooklyn also used copius amounts of butter, which is currently at a sky high price due to a global milk shortage.

Shocked fans rushed to comment on the cost of the meal, with one commenting: ‘What pains me the most is that probably cost more than most British families can afford to spend on food in a wk. [sic]’

Others added: ‘Heart attack on a plate. Totally unnecessary amount of it. Most peoples budgets do not include ‘ aged’ any kind of meat. In fact those black gloves put me right off anyway. So unappealing!’;

‘Such a waste, while others are starving to death. Where it’s the dislike button?’; ‘I think looks money?’; ‘does he not know how expensive lurpak is, defo no Costy livvy crisis over in the states?’

‘Couldn’t afford the amount of butter used! Rather pay a tenna for carvery than 80 quid in butter’; ‘Wonder the cost because the butter price was about £430’. 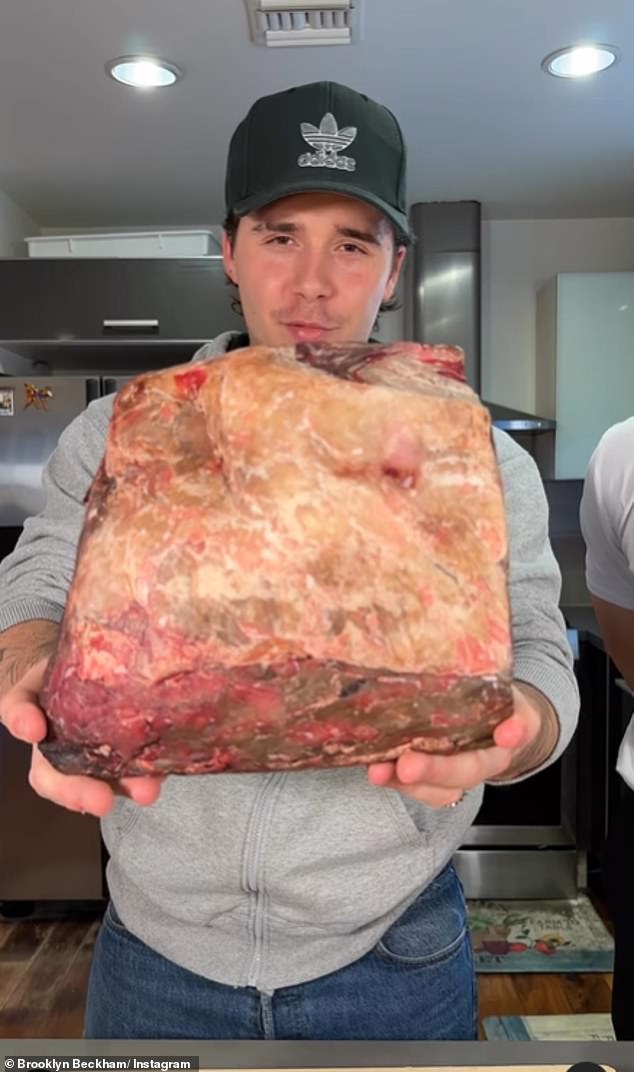 Pricey: Butchers told MailOnline that the meat appeared to be a five kilo cut of 28 day dry aged sirloin which would be worth between £200 and £300 at a meat market

Despite backlash over the meal, Brooklyn received praise from his mother Victoria Beckham, who said she’d be using the recipe as ‘inspiration’ for the next meal she makes her family.

Sharing Brooklyn’s video on Instagram, the 48-year-old designer penned: ‘Inspiration for Sunday’s roast. I’ll be attempting this for your dad and brothers and sister!’

Hitting back at fan criticism, she then pointedly added: ‘It’s rare people not raw’.

It’s unlikely the meal will ever pass Victoria’s lips, however, as she famously sticks to a diet of mainly grilled fish and vegetables.

Despite her strict eating habits, Victoria still allows herself the odd vice, whether it be tequila, or a glass of fine wine. Yet it’s unclear if she’d be comfortable consuming Brooklyn’s high calorie meal as she insists on sticking to ‘healthy fats’. 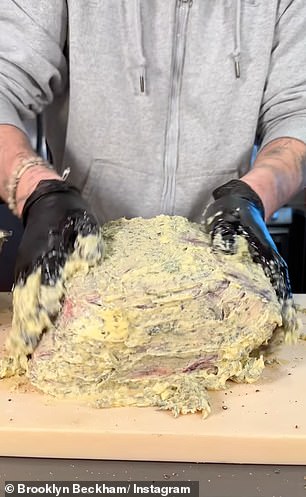 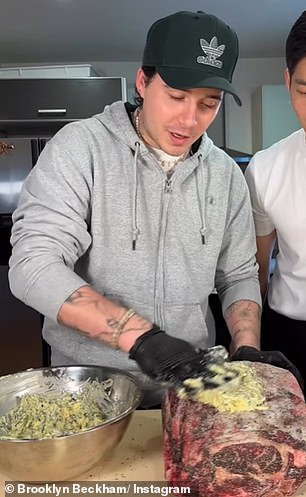 Too much: Brooklyn also used copius amounts of butter, which is currently at a sky high price due to a global milk shortage 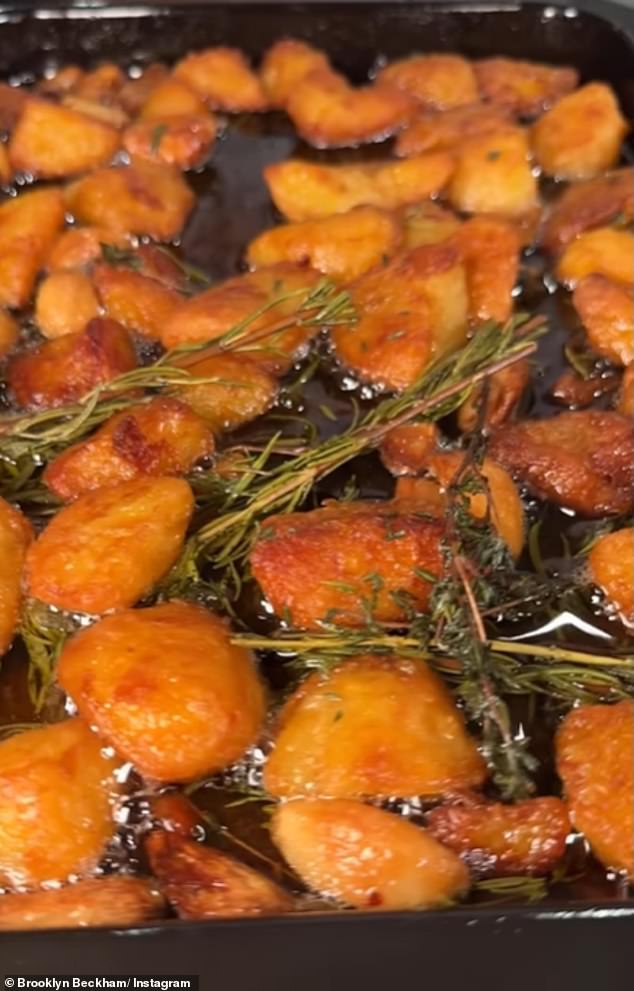 Oily: Next up were the potatoes which were covered in oil and beef fat to make them ‘really crispy’ 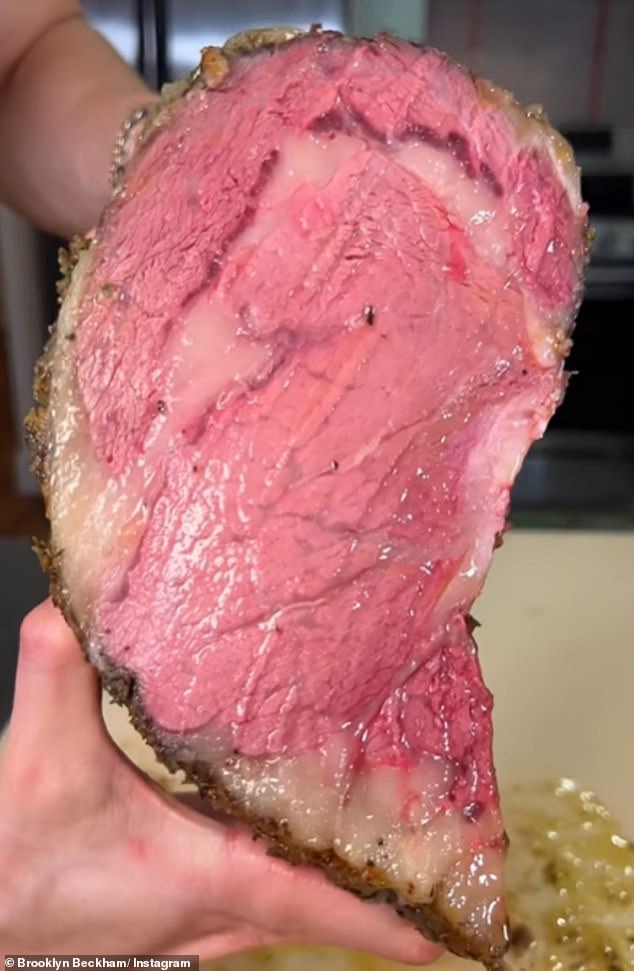 Ready to moo: Brooklyn’s fans were convinced the beef was undone after he cut into the joint and showed off the finished product

Brooklyn has yet to address the controversy after he got a roasting over his latest cooking video, in which he was joined by former Michelin cook Kevin Lee.

As he presented the step-by-step guide, Brooklyn’s fans were stunned by the sheer amount of butter and oil used for the meal, with some saying the meat was far too raw when he proudly plated it up.

Brooklyn started out by slathering the huge roasting joint with two slabs of butter, garlic and herbs before putting it in the oven.

Fans watching the video claimed that the amount he used was ‘reckless’ and even suggested that it could induce a heart attack. 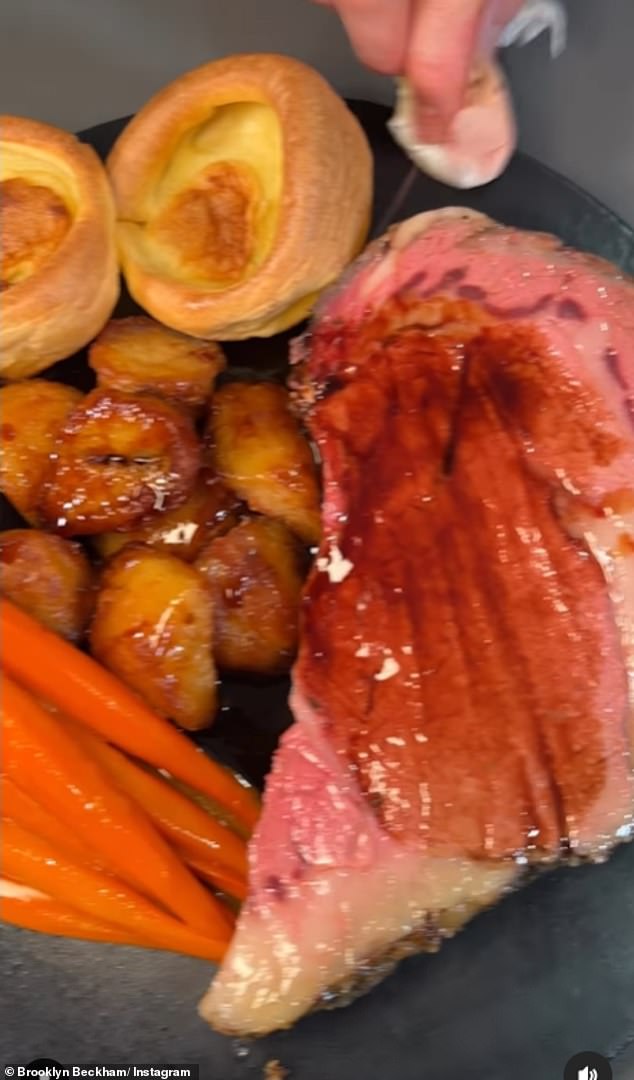 Serving it up: Again, the pair turned to butter when cooking carrots mixing it with carrot juice to create a glaze over the vegetables 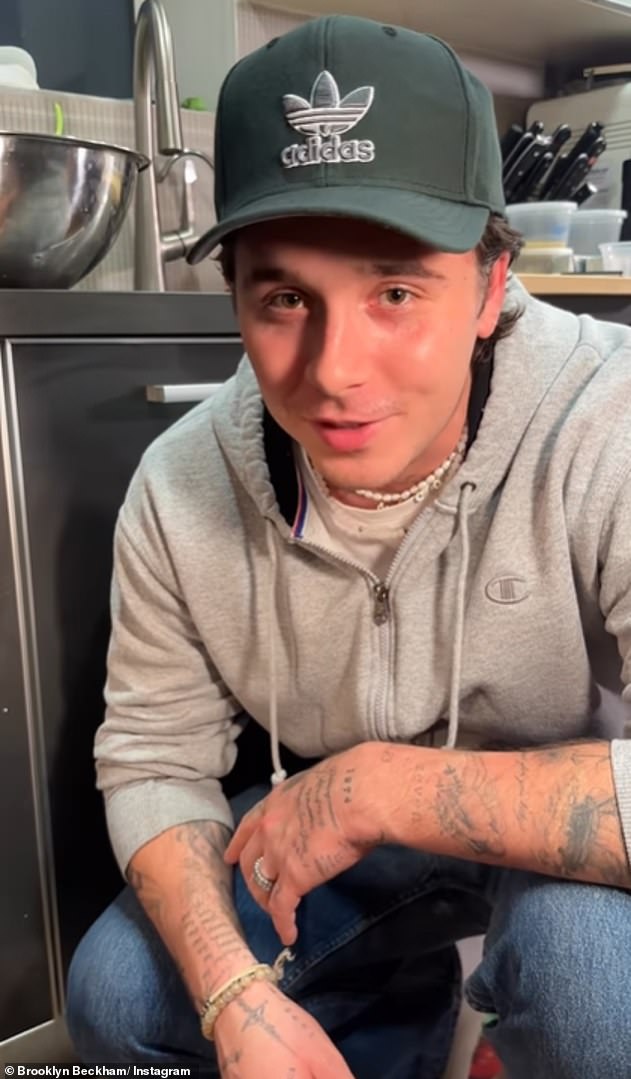 Proud: Brooklyn was delighted with how his Yorkshire puddings turned out

Next up were the potatoes which were covered in oil and beef fat to make them ‘really crispy’, and plenty of Yorkshire puddings which collected a pool of oil in the centre.

Again, the pair turned to butter when cooking carrots mixing it with carrot juice to create a glaze over the vegetables.

After taking a bite, Brooklyn said: ‘Just like a have it in England. The best Sunday roast.’

But it seems some of his followers begged to differ. 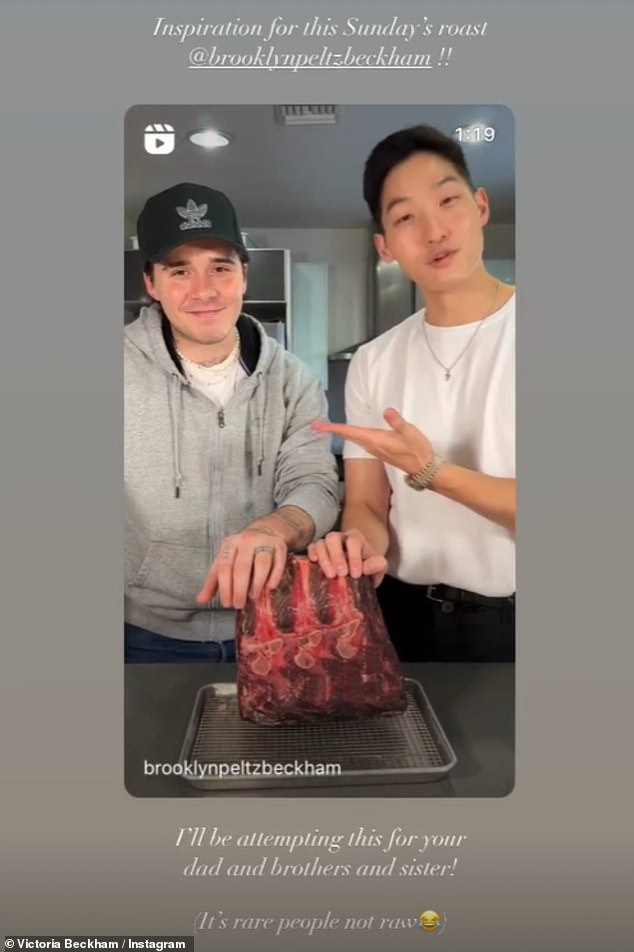 Proud mother: Victoria Beckham leapt to her son’s defence after he was widely mocked over his latest disastrous cooking tutorial 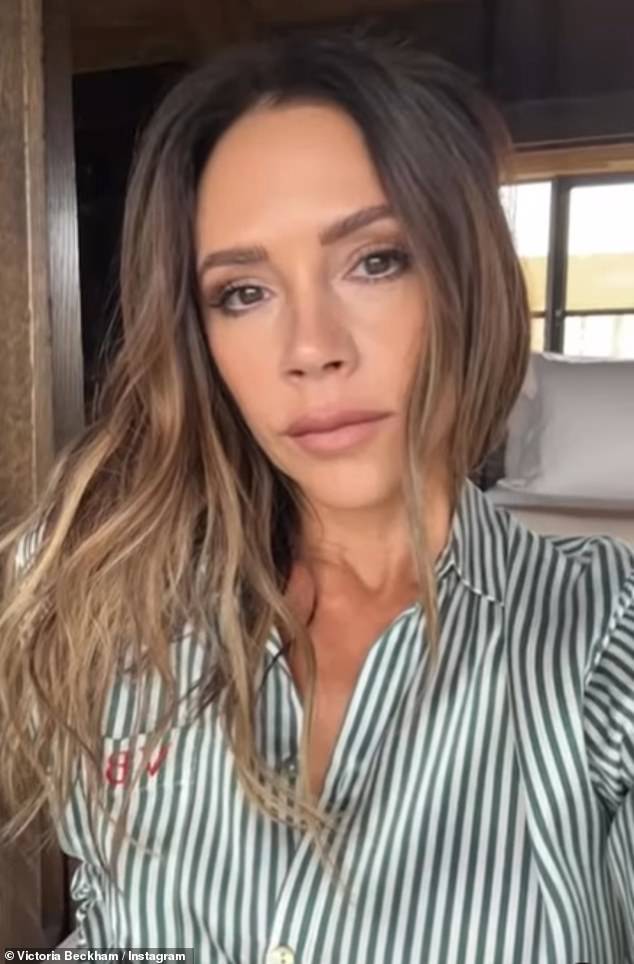 It’s rare not raw: Despite backlash over the meal, Victoria was quick to praise her eldest child, saying she’d be using the recipe as ‘inspiration’ for the next meal she makes her family

One wrote: ‘I don’t think I would eat meat like that’, while another follower added: ‘Might as well bite the cow while it’s grazing.’

A third chimed: ‘Kind of rare’, while others were offended by the sheer amount of butter used in the meal.

One follower joked: ‘Heart attack on a plate’, while another added: ‘Way too much oil’. 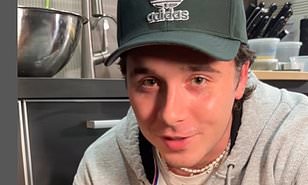 Do you think Brooklyn’s beef is undercooked?

However others liked the look of it, with one writing: ‘Incredible!!! Share the recipe.’

Brooklyn has largely been cooking for Instagram videos over the past few years as he shares basic tips with his followers on meals such as burgers and sandwiches.

But he admitted to Bustle in a recent interview: ‘I’m not a professional chef – at all.’

‘I’ve never said that. I never would say that. Obviously, my dad [retired footballer David Beckham] knew what he was doing at a very young age. I’ve only been doing cooking for not even three years.’

In December, Brooklyn treated his fans to another cooking tutorial – but he stuck to boiling a pot of plain spaghetti after whipping up a salad.

In the video, the star fried tuna steak with black and white sesame seeds and a lemon-and-egg glaze. 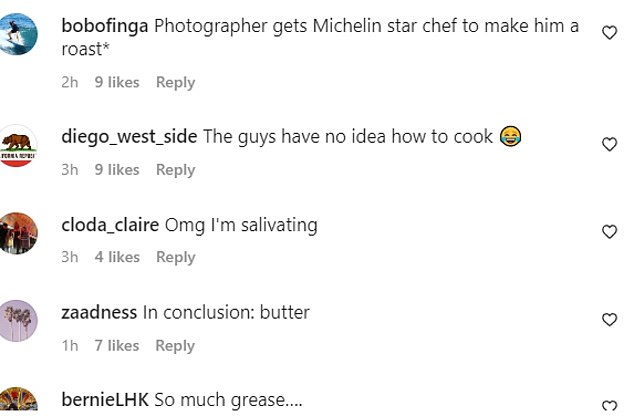 ‘So much grease!’ After taking a bite, Brooklyn said: ‘Just like a have it in England. The best Sunday roast.’ But it seems some of his followers begged to differ

For his salad, he sliced up some cucumbers and mixed them with radish and plenty of dressing.

Brooklyn seems to have won a fan in the form of Serena Williams as the tennis player commented on his post asking: ‘Can I come over?’

Brooklyn recently starred in his own online Cookin’ With Brooklyn series, which saw him enlist a 62-person crew at the eye-watering cost of $100,000 to film him making a sandwich.

In one of the eight-minute episodes, Brooklyn, who has no professional training as a chef, shows his Instagram and Facebook followers how to make a bagel sandwich with a hash brown, coleslaw and fried sea bream.

1. Brooklyn was slated by fans for his ‘raw’ meat while whipping up a Sunday dinner.

2. His salad and plain spaghetti left much to be desired in a silent cooking tutorial

4. He required assistance with frying a hash brown

5. During a cooking segment on The Today Show, viewers poked fun at his humble breakfast sandwich

According to the New York Post, the video had a team of professionals on hand including a ‘culinary producer’ who approves the recipes, five camera operators and nine other producers.

In the sandwich video, Brooklyn simply spread mayonnaise on the bagel and layered the ingredients on top.

He didn’t know how to fry fish and was also heard asking how to know when a hash brown is finished cooking.

In the video, he said: ‘I eat half the fish and then I like, mess it all up and put it in two loaves of bread with the fish, vinegar, salt, mushy peas.’

Speaking to the camera, he added: ‘Coleslaw gives sandwiches a different texture, like a crunchy texture.’

Just a couple of weeks later Brooklyn whipped up a humble fish-and-chip sandwich.

While he previously required assistance to fry a hash brown, the son of David and Victoria Beckham proved that he’d picked up more potato know-how as he began cutting up some potatoes and frying them in oil to make fresh hot chips.

He then salted up the fries, before making his own batter for two small fresh fish fillets, which he cooked in a pan.

Brooklyn then gently placed the crumbling fish fillets onto fresh bread, layered on the chips and finished with the sauce, before cutting the sandwich in half. 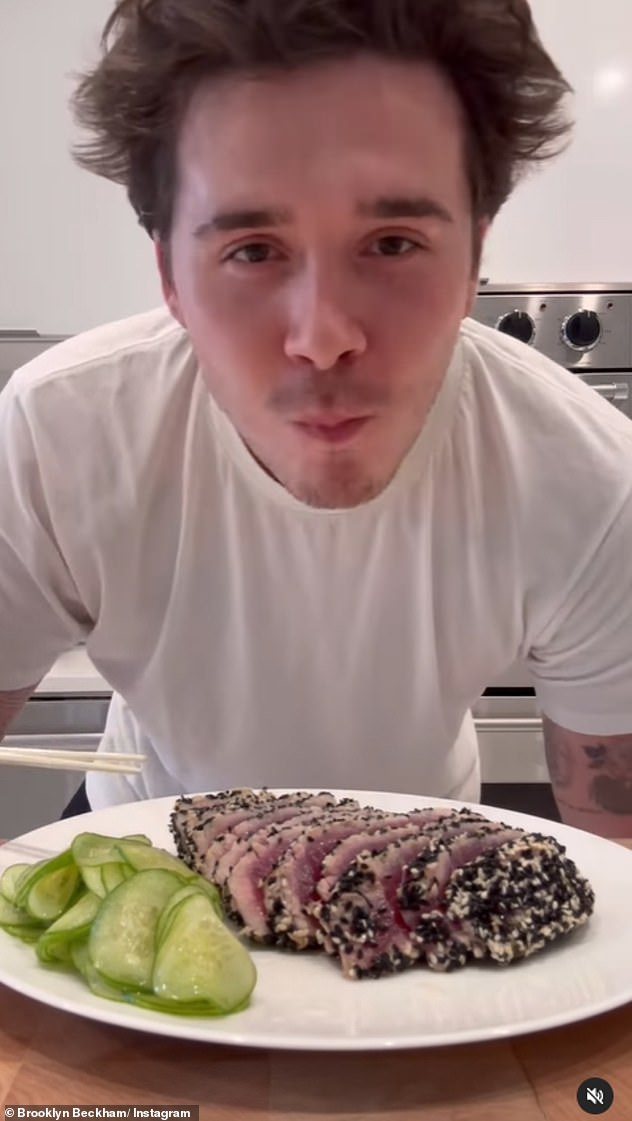 Chef: In December, Brooklyn treated his fans to another cooking tutorial – but he stuck to boiling a pot of plain spaghetti after whipping up a salad 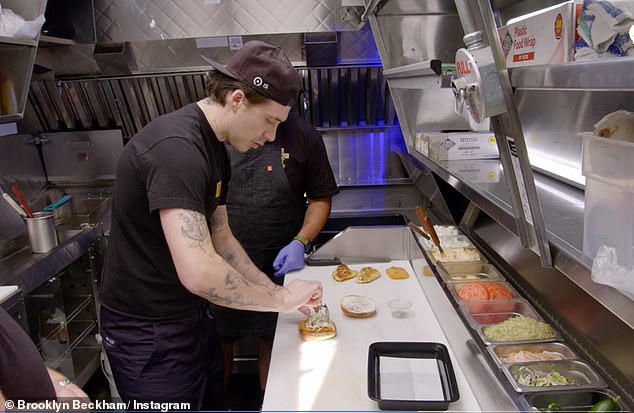 Questionable: Brooklyn has largely been cooking for Instagram videos over the past few years as he shares basic tips with his followers on meals such as burgers and sandwiches 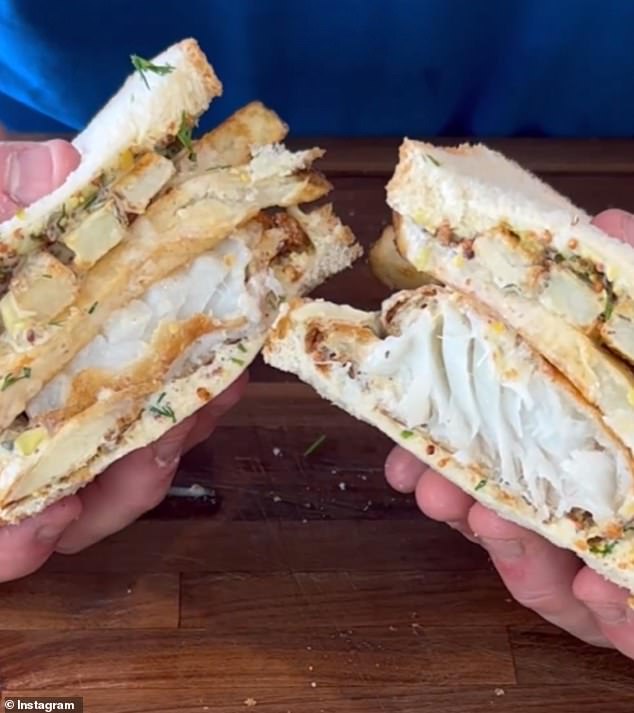 Looks good! Brooklyn has also whipped up a humble fish-and-chip sandwich for his online fans

Brooklyn was also panned for another televised cooking stunt – making a simple breakfast sandwich during a food segment on The Today Show.

The budding photographer appeared on the US programme and shared his ‘recipe’ for an English breakfast sandwich, a dish that he ‘learned from his great-grandma’.

Explaining that he developed a passion for cooking while in lockdown, during which he began posting videos of himself whipping up different dishes on Instagram, he then ran hosts Hoda Kotb and Carson Daly through his sandwich-making process. 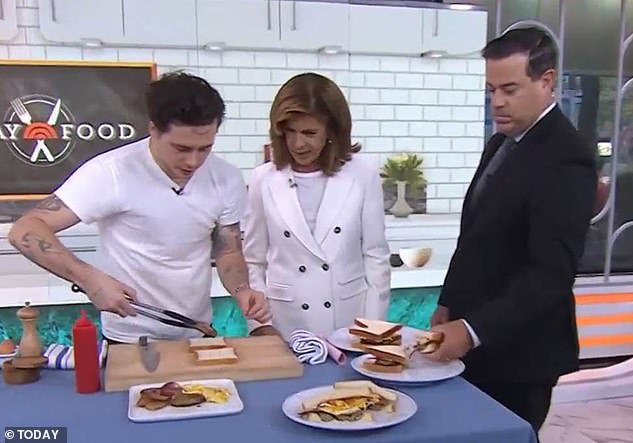 Culinary whizz? Brooklyn’s new career path has been met with raised eyebrows before, with his segment on The Today Show being mocked by viewers when it aired back in October