Beauticians and hairdressers have seen a deluge of last minute bookings as people scramble to squeeze in appointment before the nation locks down again on Thursday.

Industry insiders say they have seen a spike as people are ‘panicking’ ahead of salons having to close their doors.

It comes as one beauty salon in Merseyside announced they would refuse to shut after preiously denying the existence of coronavirus and called it a ‘hoax’.

Kim Hillier, 36, who runs Luminate Salon in Watford, said she has been snowed under with bookings since the lockdown announcement on Saturday.

She told MailOnline her seven staff have been working longer hours and extra shifts to cope with the stampede of people rushing to get cuts before Thursday.

‘We’re fully booked, all the columns are full. I think everyone’s panicking before lockdown.’

‘We’re still starting at 10am because we all have kids and need to do the school run, but we’re working until 9pm.

‘We even came in yesterday, and we never work Sundays.’

Skin Kerr Aesthetics Hair & Beauty in Bootle, Merseyside, posted a message on its Instagram page to say the business would not be complying with the upcoming lockdown. Pictured: Police enter the salon on October 5

Ms Hillier said the mood in the salon was good as her staff like to be busy, but was anxiously waiting to find out if she’d receive grants.

‘We got grants last time, but we’ll have to find out if we’ll get them this time. We’ve still got rent to pay.’

Skin Kerr Aesthetics Hair & Beauty in Bootle, Merseyside, announced they would refuse to close on Thursday when hairdressers, salons, gyms, restaurants, pubs and bars will all shut up shop.

They posted a message on its Instagram page to say the business would not be complying with the upcoming lockdown.

Bosses say they will continue to provide beauty services and have vowed to fight any fines they receive in court.

In a post on the salon’s Instagram page, it said: ‘We will not be locking down again. We will remain open. We will fight this and any fines in a common law court.’ 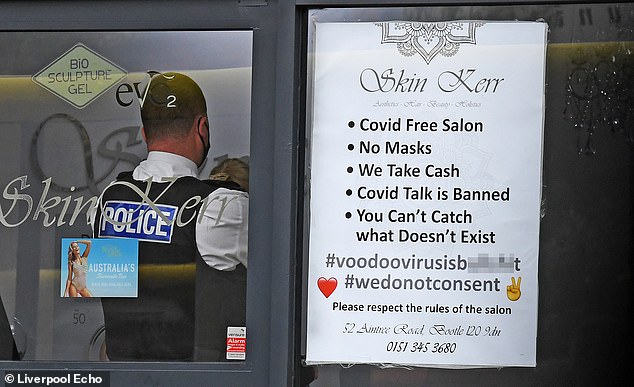 Bosses at the salon say they will continue to provide beauty services and have vowed to fight any fines they receive in court. Pictured: Police enter the salon on October 5

In a post on the salon’s Instagram page, it said: ‘We will not be locking down again. We will remain open. We will fight this and any fines in a common law court.’

What are the rules for beauty salons and other shops during the new national lockdown?

According to the government’s new lockdown rules, which are set to come in on Thursday and are planned to last until December 2, all non-essential shops will have to close.

Non-essential retail can also remain open for delivery to customers and click-and-collect.

The Cabinet Office says details about enforcement powers are set to be published ahead of Thursday.

All personal care facilities such as hair, beauty and nail salons, tattoo parlours, spas, massage parlours, body and skin piercing services, non-medical acupuncture, and tanning salons are set close from Thursday as part of the lockdown – which is set to last until December.

Skin Kerr and Beauty was allowed to remain open, alongside other salons, despite it being in a Tier Three area – the highest on the government’s alert scheme.

But in September, Skin Kerr was hit with a closure order by Sefton Council after it repeatedly failed to abide by coronavirus regulations.

The owners of the Aintree Road salon has previously described the pandemic as a ‘bulls**t voodoo virus’ and displayed posters saying ‘you can’t catch what doesn’t exist’ as well as banning masks and ‘Covid talk’.

Merseyside Police also vowed to visit the salon to speak to staff and its owner to ‘make sure they are aware of their responsibilities’.

Last month Sefton Council announced that the salon had been allowed to re-open after dialogue with the owners.

Speaking at the time, Cllr Paulette Lappin (Lab) said: ‘I am pleased that our Environmental Health team has been able to work constructively with the owner of this Bootle business to put the measures in place that enable it to re-open.

‘As we have made clear, Sefton Council will not hesitate to take action against businesses refusing to put in place measures to keep staff and customers safe, but equally we will do all we can to work with them to resolve the issues and enable them to start trading again.

‘The vast majority of our local businesses have been doing their utmost to meet their legal duty of ensuring they are Covid-secure and since the start of the pandemic in March we have been providing advice and support. 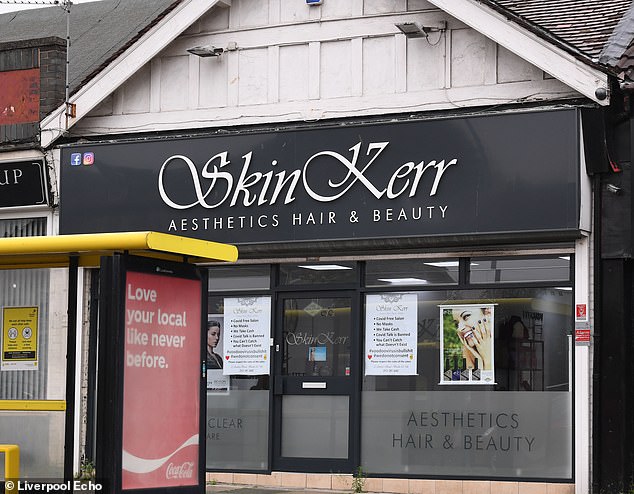 In September, Skin Kerr was hit with a closure order by Sefton Council after it repeatedly failed to abide by coronavirus regulations

What are the current Tier 3 restrictions in Liverpool?

What are the current restrictions?

What changed with gyms?

These rules will be superseded by the new national rules on Thursday.

‘We appreciate the efforts and sacrifices they have made and would encourage them to get in touch if they are struggling to meet the requirements.’

On its website Sefton Council has said any business or venue that fails to comply with restrictions may face fines of up to £10,000, prosecution, or in some cases closure.

Skin Kerr Aesthetics Hair & Beauty has been approached for comment, as have Merseyside Police.

Today, a spokesperson for Sefton Council said it would ‘not be appropriate’ for the authority to ‘comment on speculation on social media’.

However, in a statement, the spokesperson told MailOnline: ‘Like everyone else we are waiting to see the full details of the new restrictions and will respond accordingly.

‘We will continue to do all we can to support businesses across the Borough to help them cope with the Government’s new restrictions and to ensure the safety of their customers and employees.

‘And, once the new lockdown commences from Thursday, Council Officers will be ensuring that local businesses are complying, as well as responding to any allegations that restricted businesses remain open.’

The salon is in the Merseyside area, which last month was plunged into Tier Three lockdown after a rise in Covid cases and hospitalisations.

Though hairdressers and beauty salons were allowed to remain open, with strict measures, gyms were told to close.

It sparked a campaign by one Merseyside gym owner Nick Whitcombe from Bodytech Fitness in Moreton – who refused to close his gym, despite receiving a visit from armed police.

The campaign included a petition, which has been signed more than 400,000 times, and a GoFundMe page, which was set to help pay any fines, which topped £50,000.

But the government later agreed to allow gyms to stay open in Liverpool, despite it still being in Tier Three lockdown.

The move brought the region in line with restrictions in Lancashire, also in Tier Three, where gyms were allowed to stay open.

Mr Whitcome later posted an emotional video on his Instagram page in which he , claimed to his thousands of followers: ‘We’ve saved our sector.’