Britons urged to ‘stop peeing on themselves’ to cure jellyfish stings! Experts claims that urine is NOT an effective treatment – amid increase in sightings on UK shores

Britons have been urged to ‘stop peeing on themselves’ to treat jellyfish stings amid a spike in sightings of the creatures because of the warm weather.

Experts issued the bizarre warning to dispel the popular myth that urine helps to soothe the pain.

It’s just one of a whole host of home remedies that are believed to help, including shaving cream, baking soda, and alcohol.

The urine treatment was made famous by an episode of Friends called The One With The Jellyfish.

Bizarre warning: Britons have been urged to ‘stop peeing on themselves’ to treat jellyfish stings amid a spike in sightings of the creatures because of the warm weather (file photo)

WHAT TO DO IF YOU ARE STUNG BY A JELLYFISH

If the person stung doesn’t have serious symptoms such as breathing difficulties or chest pain and hasn’t been caught in a sensitive area, such as the face or genitals you can deal with a sting yourself, says the NHS.

After leaving the water immediately the stung person should stay as still as possible to not to increase the spread of toxins through the body.

The stingers should then be removed (tweezers are best) and then apply shaving cream. An ice pack will also reduce pain and inflammation if one is available.

Vinegar and other alcohol-based substances are now discouraged as they activate unfired stinging cells, while urine can also makes things worse.

After the shaving cream is applied, experts advise ‘using a credit card or shell to remove any nematocysts (small poisonous sacs) that are stuck to the skin.’

Paracetamol and ibuprofen can also be taken to help relieve pain and inflammation.

When Monica gets stung, Joey says he remembers a Discovery Channel documentary suggesting that urinating on a jellyfish sting will make the pain go away.

But after Joey experiences stage fright, Chandler is forced to relieve himself on Monica instead, leading to all three having to confess to the rest of the gang about their distressing experience.

SEA LIFE London Aquarium said it was dispelling the myth once-and-for-all that a jellyfish sting is best treated with urine, after a new survey found that almost a third of Britons (30 per cent) still believe it to be true.

The London Aquarium is urging families to steer clear of their own or a family or friend’s bodily fluids and instead rinse the affected area with seawater, remove any tentacles left from the sting using an instrument to avoid being stung and then soak the area in very warm water to alleviate any pain.

Jack Willans, senior aquarist and lead jellyologist at SEA LIFE London Aquarium, said: ‘It’s true what they say, you shouldn’t believe everything you see on the TV, and peeing on a jellyfish sting is the ultimate fake news.

‘Chandler, Monica and Joey certainly have a lot to answer for!

‘Rising seasonal temperatures around our coastlines offer the perfect conditions for jellyfish and there have been a series of sightings this summer resulting in people being stung.

‘We advise the public to steer clear of bodily fluids if unfortunate enough to get stung and follow some simple steps which don’t involve using urine as a cure.’

The increased number of jellyfish swarms to UK shores this summer is thanks to the high temperatures and increased sunlight over July and August which meant there were more plankton for the jellyfish to eat, resulting in an increase in their population.

Following the increase, a survey found that men are more likely than women to treat a jellyfish string with urine, whilst one in six (17 per cent) Britons would even ask their nearest and dearest to urinate on them to help alleviate the pain.

Of those surveyed, those in the East of England (37 per cent) and the East Midlands (32 per cent) are firm believers that urine works best when it comes to treating a jellyfish sting, with men (18 per cent) being more inclined to let their nearest and dearest urinate on them.

That being said, and when push comes to shove, a quarter (26 per cent) of Brits said they would prefer to urinate on themselves.

Those located in Yorkshire and Humber and the North West of England (24 per cent), close to seaside resorts such as Whitby, Scarborough and Blackpool, believe the myth the least.

The research of more than 1,000 Britons was carried out last month by Censuswide on behalf of the SEA LIFE London Aquarium. 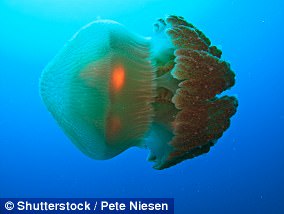 The Australian box jellyfish is considered the most venomous marine animal

The box jellyfish is one of the deadliest creatures on earth.

The tentacles of fully grown box jellyfish can reach nearly 10 feet in length and contain about 5,000 stinging cells per tentacle.

They use their venom to stun or kill fish or other prey, but even a small amount can be lethal for humans.

The venom of the box jellyfish, found in tropical and subtropical oceans, disrupts the heart and nervous systems and can cause heart failure within minutes.

Medical professionals say all cases should be treated as urgent and potentially lethal.