Over half of Britons doubt the UK will reach net zero by 2050, while just shy of 20 per cent think the target will never be achieved, fresh research has revealed.

The UK has pledged to reduce its greenhouse-gas emissions to net zero by 2050, meaning the country intends to take as much of these climate-changing gases out of the atmosphere as it puts in.

Amid high inflation and ongoing turbulence, however, Britons ranked climate as the fourth most important issue facing the country, after the cost of living, the economy and the NHS, according to the latest British Gas Net Zero Homes Index.

Net zero deadline doubts: Over half of Britons doubt the UK will reach net zero by 2050, findings suggest

Forty-six per cent of people surveyed said they believed action on climate change would help strengthen the British economy, while 17 per cent thought it would have a negative impact on the nation’s finances.

Most important issues facing the country

According to the latest British Gas Net Zero Homes Index, the most important issues facing the UK, as viewed by the public, are:

Of the 92 per cent of people surveyed who said they believed climate change was real, 88 per cent said they were concerned about it.

But, only 45 per cent knew what the commitment to net zero by 2050 actually meant.

Forty-seven per cent of people surveyed said they did not believe the UK government was doing enough to tackle climate change, while 24 per cent believe it is doing the right amount of work, and 20 per cent said they thought the government was placing too much emphasis on it.

While the findings suggest climate change is not at the top of every households’ priority list, 51 per cent of over 4,000 Britons surveyed said higher energy bills meant they were more likely to consider installing ‘energy efficient’ products in their home in the next year or so.

Seventy-three per cent said they thought tackling climate change would require people to ‘radically change the way we live our lives’.

What changes are people willing to make to their homes?

Housing accounts for around 14 per cent of the UK’s greenhouse gas emissions, mostly because of gas boiler heating systems and poor insulation, according to the UK Committee on Climate Change.

According to the British Gas Net Zero Homes Index published today, 78 per cent of people said they were willing to make changes in their own homes in a bid to tackle climate change. 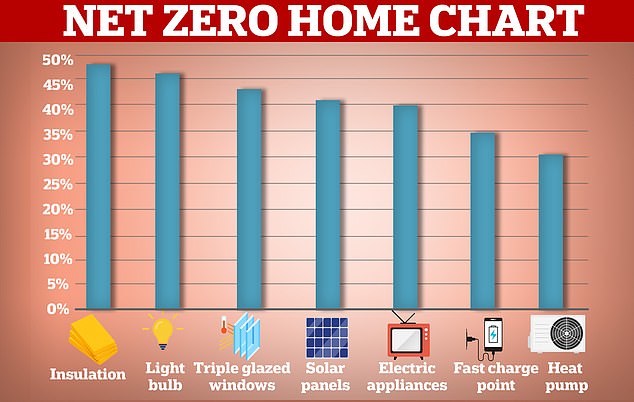 What percentage of Britons are willing to make changes to their homes in the next two years?

Electric vehicles also saw some support from consumers, with 35 per cent willing to install a home charger to power an EV. Support was stronger in built up areas such as London, according to the findings.

The cohort most willing to install an EV charger was the 25-to-34-year-old category, of whom 52 per cent were willing. The cohort least willing were the 65 years and over, where the figure was 21 per cent.

Twelve per cent of people surveyed said they would be willing to pay an extra £5,000 or more for an EV, compared to an equivalent petrol or diesel motor.

The data showed there is more uncertainty about low carbon heating. When asked what they would replace their existing boiler with, 37 per cent of people surveyed said a similar gas or oil-fired boiler, and only 14 per cent said they would choose a heat pump.

The majority of people surveyed admitted they did not know what option they would choose, and the majority were more likely to be influenced by price than climate change considerations. According to the index, fewer than 1 per cent of homes in England are kitted out with a heat pump.

An air source heat pump typically costs more than a new gas or oil-fired central heating system. The average cost ranges from £12,000 to £17,000, depending on the pump brand and its heat output, according to EDF Energy.

The government is providing grants to encourage property owners to install low carbon heating systems such as heat pumps, through the Boiler Upgrade Scheme.

These grants can, according to the government, help property owners overcome the upfront cost of low carbon heating technologies.

The British Gas Net Zero Homes Index also examined the future direction of energy across the UK more broadly. Of everyone surveyed in the index, 87 per cent said they supported building more solar power, with just 2 per cent opposing the idea.

Eighty-four per cent said they supported the construction of offshore wind, with just 4 per cent objecting.

The research said: ‘The development of onshore wind has previously faced local opposition and some politicians believe it is unpopular with the public.’ 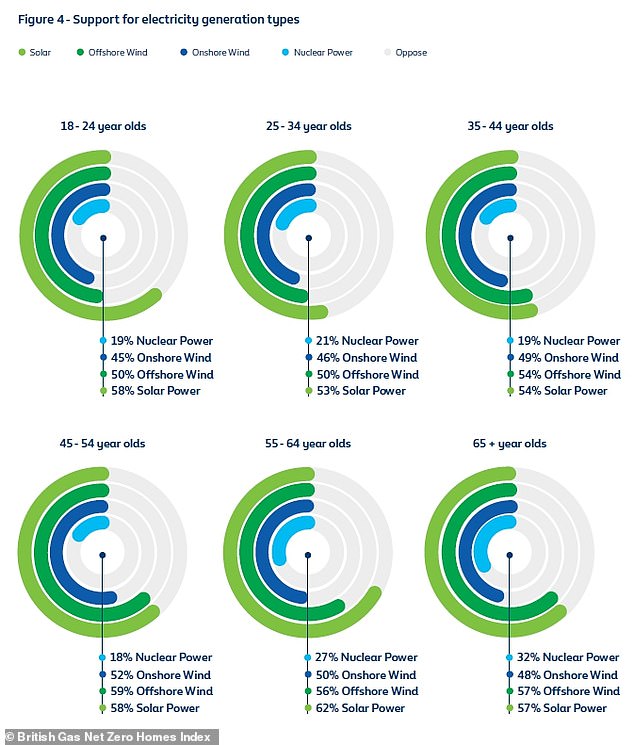 Looking at the development of nuclear power, 48 per cent of people surveyed supported the idea, while 23 per cent opposed; making it among the more controversial low carbon sources of power, according to the research.

Andrew Middleton, managing director of British Gas Net Zero, said: ‘We hope that this index will help to measure changing attitudes over time and understand how people are feeling about choices in the lead up to the Net Zero target, particularly in light of these difficult economic times.

‘It highlights where there are some uncertainties – such as heat pumps and how to decarbonise heating – where we can focus the support we give to customers.’

He added: ‘Our engineers have installed over 8,000 electric car charging points, have installed over 1,500 heat pumps and are improving insulation and providing solar panels around the country each day. Focusing on the critical areas of power, heat, transport and the gas network, we hope to accelerate the journey to Net Zero.’

British Gas is launching a new net zero business unit whose mission will be to support customers looking to update their homes with more energy efficient heating and power options.