Analysts at Peel Hunt said in a recent research note that there are few historical comparisons to be drawn with current British ‘stagflation’, with the country suffering stuttering growth and the potential for inflation of more than 10 per cent to come.

It is therefore difficult to make a broad call of the likely impact on particular sectors, and investors must instead hunt for companies capable of withstanding rising costs and weaker demand. 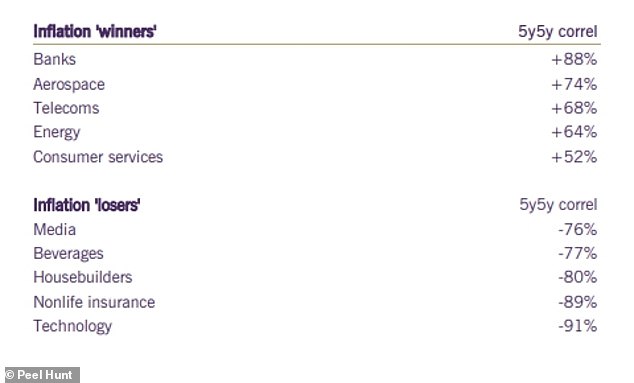 ‘The sterling 5y5y swap rate is a good proxy for moves in longer-term expectations’: The major FTSE sectors with the highest positive and negative correlations with the swap rate

The outlook has worsened in the last week amid disappointing new data, which revealed GDP growth slowing to just 0.1 per cent and CPI inflation jumping beyond expectations to 7 per cent.

Head of research at Peel Hunt Charles Hall said: ‘This is a unique situation, so going back into history to see what happens is not necessarily a good guide.

‘It’s going to be an incredibly difficult market, so you have to identify which companies are going to be able to pass on price increases to their customers.’

Hall added that consumer stocks are likely to find the coming months toughest, with demand set to fall as the cost-of-living crisis bites and people hold off on unnecessary purchases.

He said: ‘Look at some of the food and commodity products that are going up in price, for example.

‘Palm oil has doubled in price, and palm oil goes into shampoo and soap. It’s not just food – barley goes into beer and beer prices are going to go up a lot.

‘This is going to hit a broad range of product categories rather than just a narrow space.’

By contrast, Peel Hunt is ‘feeling reasonably upbeat about the housing market’, Hall said, and the firm has highlighted several housebuilders and materials companies as a result.

Hall added: ‘In normal circumstances you would expect rising interest rates to be immensely challenging for the housing market, particularly as build costs are going up.

‘But the demand for housing is so great and I don’t think that’s going to go away anytime soon.

‘We have an under supply of housing in the UK, and the demand and desire to own your own properties seems to be strengthening, not weakening.

‘Housebuilders are pretty well set up to be able to pass on that those price increases and that is not going to significantly undermine the affordability of houses.’ 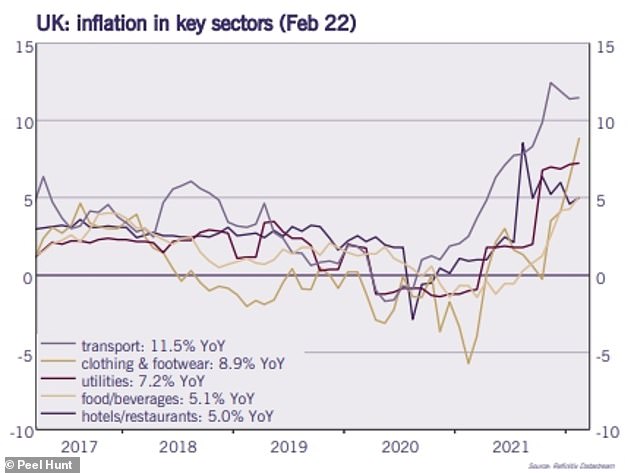 Of the 13 economic subsectors, 11 contributed positively to the increase in the annual rate in February

Premier Foods is well placed to manage the current environment. Premier has pricing power through its focus on brands, has the leading market position across all of its categories and has a track record of managing inflation.

The company has lower exposure to the labour supply issues than other companies in the sector as its manufacturing operations are highly automated and the company has relatively few employees close to the minimum wage.

Games Workshop has relatively low exposure to higher costs given its high gross margin and ability to increase prices (5 per cent increase from March). The key cost increase over the last year has been freight, which has stabilised in recent months. On the demand side, hobbies tend to be resilient during periods of stress as was observed during the Global Financial Crisis (GFC).

We would also highlight a number of wealth managers that will benefit from rising rates: Hargreaves Lansdown, Curtis Banks, Rathbones and Brooks Macdonald, for example. In each case, there tends to be little associated cost with improving interest income, and the marginal profit drop-through is, as a consequence, significant.

CVS – The veterinary industry tends to be highly resilient in a period of pressure on consumer budgets as [roughly] 40 per cent of spend is emergency-based and pet owners tend to prioritise the health of their pet. The industry has good pricing power given the relatively small spend per customer and limited desire to shop around.

During the GFC, CVS had a brief period of weaker sales, which was understandable given the scale of concern over job retention and household financing. Given the importance of pets, we would not expect a period of tighter household financing to impact demand. If it lasted for an extended period, then the desire to replace a pet or add a pet would diminish. Currently, we see upside potential to our forecasts.

Travis Perkins and Grafton Group typically hold around two months of inventory, which, all things being equal, translates to an additional 200bps on a typical 30 per cent gross margin. Thus far, higher prices for RMI products have not impacted demand, with consumers typically having significant savings post Covid-19, and RMI projects (particularly large ones) being skewed towards older, higher income households, who have not only accrued more savings during Covid, but also have greater levels of housing equity and lower levels of debt having ridden successive house price booms in the past three decades.

In terms of platforms, both Rightmove and Auto Trader offer pricing clarity to a market through scale of coverage. And in the case of Auto Trader additionally some very important tools and services for both retailers and consumers that help assess the price position of any particular vehicle.

Certainly the whole market oversight that is intrinsic to Auto Trader’s service allows the retailer to buy with confidence and to price with insight, and also for the consumer to assess independently whether a vehicle is cheap or expensive in a current market context.

JD Sports – History tells us that sports fashion is resilient to economic swings (especially in footwear) and we see no reason why this ‘shock; should be any different. There are many other monthly expenditures that go before the regular pair of new trainers is sacrificed.

It may actually be the case that the core JD shopper is relatively better off in the next six months or so (minimum wage rising but Mum and Dad paying the utility and food bills), so we have few concerns that inflation in footwear or apparel will have a material impact on JD’s sales.

Ocado has already commented on the issues around food pricing in its most recent trading statement, which will impact its near-term profitability. However, this makes the need to digitally transform the grocery industry even more important. The investment thesis for Ocado Group isn’t Ocado.com. With food costs and wage rises beyond their control, supermarkets around the world should not bolt-on extra costs (such as in-store pick up and delivery) to fulfil consumers’ desire for their already squeezed margins. They should look to Ocado’s centralised fulfilment solution. It is profitable and cash generative for the client and even has the potential to help the client expand their reach (eg Kroger in the US). Moreover, Ocado’s model is a mid-single digit commission on gross merchandise value (ie the food sold), hence if food prices go up, so will Ocado’s revenues.