A British socialite stranded in Cleveland for two weeks amid the coronavirus pandemic has shared her ‘heartbreaking’ experience of having to quarantine at the Ritz Carlton Hotel – where she says she was forced to clean her room herself and survive on a diet of Subway sandwiches.

Natasha Rayne, from South Kensington, London, had flown to Ohio from the UK to meet her newborn twins who were born four weeks early on March 20 to the same Ohio surrogate who carried Sarah Jessica Parker and Matthew Broderick’s twin girls.

Still in London at the time, and facing down President Trump’s European travel ban, Rayne – the daughter of Lady Jane Lacey, Queen Elizabeth’s Maid of Honor at her Coronation, and Lord Max Rayne – managed to pull some considerable strings to get on one of the last private planes leaving the UK for the  US, with her daughter, Delilah.

But upon her arrival in Cleveland, the 54-year-old was told she had to quarantine for two weeks inside her luxury hotel room at the Ritz-Carlton, where suites can cost up to as much as $3,000 per-night.

‘Being quarantined at the Ritz-Carlton sounds posh but it isn’t,’ she told the New York Post. ‘We were almost the only other people in the hotel. There were no amenities whatsoever.’

British socialite Natasha Rayne (left) was stranded in Cleveland for two weeks amid the coronavirus pandemic. She since has shared her ‘heartbreaking’ experience of having to quarantine at the Ritz Carlton Hotel 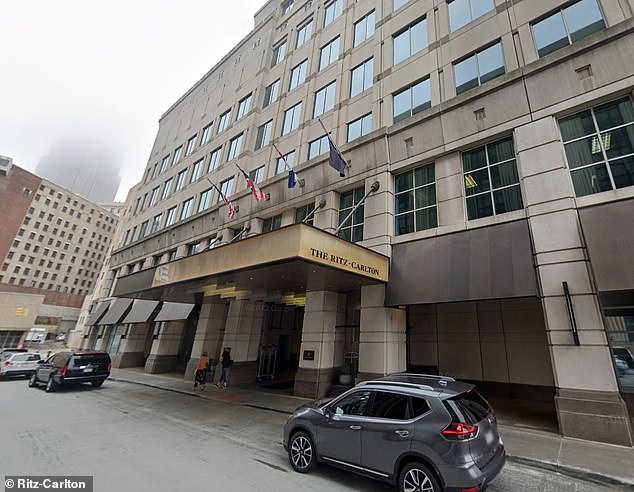 Upon her arrival in Cleveland, the 54-year-old was told she had to quarantine for two weeks inside her luxury hotel room at the Ritz-Carlton, where suites can cost up to as much as $3,000 per-night

Accustomed to a life of opulence and silver service, Rayne says she was horrified to discover the hotel had suspended many of its services, such as room service, as a result of the COVID-19 pandemic.

Rayne also disclosed how she and Delilah had to clean the room themselves because they ‘couldn’t allow maids in without masks and gloves’.

‘I feel like I am in someone else’s movie,’ she said at the time. ‘It’s heartbreaking.’

With many of the hotel’s amenities closed off, including the kitchen, Rayne said she and her daughter had to use fast-food delivery apps for each of their meals, regularly opting for a Subway sandwich.

After spending two weeks inside the desolate luxury hotel, Rayne was finally able to hold her twin children, Sebastian and Talitha, in her arms.

Rayne initially planned on leaving the Ritz-Carlton and taking her three children to stay at the Presidential Suite of the Setai Hotel in Miami Beach while she awaited passports for her newborns, but the location has since closed.

With government agencies overwhelmed, Rayne may also be forced to wait several months before she can obtain the right paperwork to take the twins back to London.

In the meantime, she has since fled Cleveland after chartering a private jet to Malibu, California, where she is now sheltering-in-place in a waterfront rental. 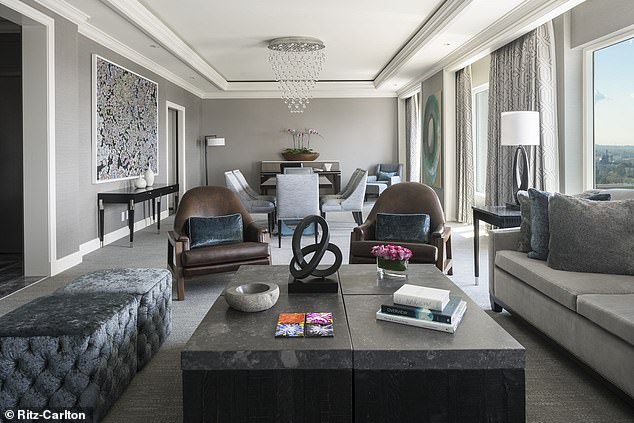 Accustomed to a life of opulence and silver service, Rayne says she was horrified to discover the hotel had many of suspended services, such as room service, as a result of the COVID-19 pandemic

Rayne said she’s still in the dark about when she will be able to return with her family to her South Kensington home.

‘The US passport office is only issuing passports in the most urgent cases,’ her lawyer, Natalie Loader, told the Post. ‘We are asking the UK Home Office to process emergency travel documents to allow parents and newborn babies to return home.’

Despite the air of uncertainly, Rayne says she’s determined to stay positive.

‘My father would always say, ‘If you don’t succeed, try, try again.’ I was brought up to never give up. I’ve had massive obstacles in my life, but I was sure that one day this baby thing would work.’

Born with the genetic bone disorder osteogenesis imperfect, Rayne said she had been trying to grow her family naturally for years but after losing nine babies to miscarriage she turned to surrogacy.

‘I never gave up hope for having more children,’ Rayne told the outlet. ‘As recently as a year ago my mum was sending me clippings from the newspaper saying things like: ‘Guatemalan woman, 94, has triplets’ … I’ve had people say to me: ‘If you give me your underwear, I will send them to my mother who is a witch doctor in Africa, who will make a blessing and you will be pregnant’; ‘I’ll drink holy water for you’; ‘I’ll pray to the fertility goddess.’ ‘ 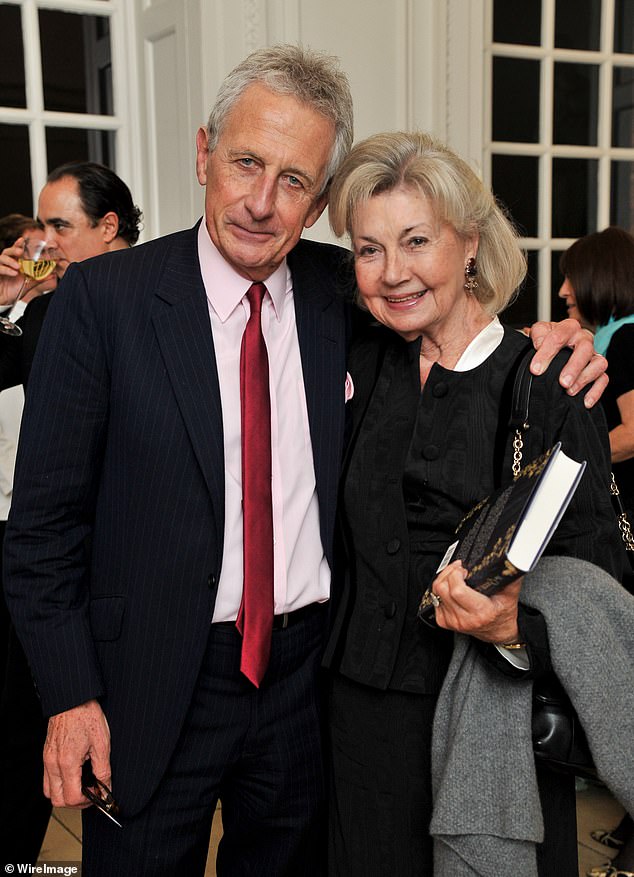 Rayne – the daughter of Lady Jane Lacey, Queen Elizabeth’s Maid of Honor at her Coronation, and Lord Max Rayne (both shown above) – managed to pull some considerable strings to get on one of the last private planes leaving the UK for New York, with her daughter, Delilah. But when she arrived in Quarantine she was forced to stay in her hotel room for 14 days 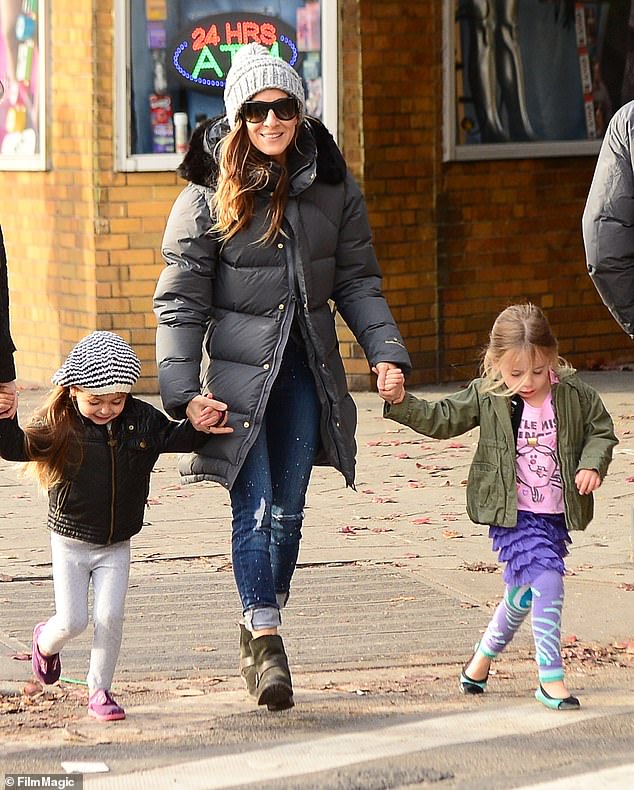 Rayne’s twins arrived much earlier than expected after the surrogate was rushed to hospital with preeclampsia, where the twins were born via cesarean section.

‘We couldn’t be there, which was absolutely heartbreaking after this crazy baby journey,’ she said of missing the children’s births.

But determined to get to them despite the COVID-19-induced European travel ban put in place by Trump days earlier, Rayne assembled a team of immigration lawyers who were, within hours, able to secure her a special travel exemption.

She flew to New York via private jet, before leaving for Ohio from Newark, New Jersey, just before the Federal Aviation Authority temporarily suspended flights coming out of New York on March 21.

‘Getting out of London and going to a country that has said you can’t be here under pretty much any circumstance, seemed to be nigh on impossible,’ Rayne reflected.

‘I was imagining not seeing my children until they were six months old, so we wanted to move mountains to get here. We had to tell the U.S. government, ‘These children are being born alone. We don’t have any living family in America.’

‘I found that when it has to do with babies, everyone is on your side.’