Trade union leaders were today accused of ‘acting like football agents’ after urging NHS consultants to charge up to £250 per hour for extra overnight work.

The British Medical Association (BMA) published a ‘rate card’ on how much doctors should charge employers for non-contractual work.

This applies to working extra hours, or taking on additional shifts to help tackle the backlog of patients needing routine care like hip and knee surgeries.

The £250 figure is for work done overnight from 11pm to 7am, while weekends from 7am to 11pm should be charged at £200 per hour as a minimum, the BMA claimed.

Hospital bosses slammed the fees, which amount to ‘many multiples of their hourly rate’ for consultants — who are paid up to £119,000 every year.

One senior figure claimed the ‘optics are very poor’, while another accused the BMA of ‘pushing up the rates based on their own egos’.

But the BMA hit back, claiming the fees were already up to consultants’ negotiation and the rate card should ensure a ‘fairer and more consistent approach to overtime pay’. 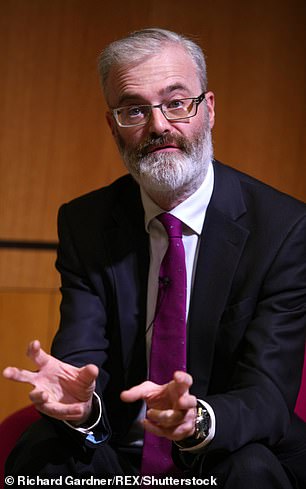 British Medical Association leaders were today accused of ‘acting like football agents’ after urging NHS consultants to charge at least £250 per hour for overnight shifts. NHS Employers chief executive Danny Mortimer (right) said ‘the overwhelming majority are not minded to agree to the BMA’s demands’. Left: the head of the BMA, Professor Philip Banfield

Physiotherapists could strike in a row over NHS pay

Physiotherapy staff across England and Wales will vote on industrial action after overwhelmingly rejecting this year’s NHS pay award.

The Chartered Society of Physiotherapy (CSP) said almost 89 per cent of those voting in England said they were prepared to take industrial action, with 83 per cent in Wales.

The CSP Council is recommending members vote in support of action following a decision already taken to ballot in Scotland.

The votes will be the first time in the CSP’s century-plus history that its members will have been balloted over pay.

Its council chairman Alex Mackenzie said a recent pay award was less than half the current rate of inflation for most staff.

He said: ‘At a time when recruitment and retention is so vital to the NHS, and physiotherapy services are so crucial to reducing waiting lists and delivering high quality services, we cannot afford to lose staff due to pay.

‘Considering industrial action is always a last resort for NHS staff who are dedicated to their patients, their colleagues and the services they provide.

‘The CSP has never held an industrial action ballot for pay across England and Wales and such a decision is always taken with great reluctance.

‘However, CSP members have indicated that unless there is an improved pay award they will consider industrial action.

‘Any action will of course ensure that critical to life services are maintained.

‘In light of this decision we would urge the governments in England and Wales to open talks to discuss an improved award that could avoid a damaging dispute and offer all NHS workers the pay rise they need and deserve.’

The CSP said it is working closely with other health unions on the dispute.

The row, reported by the Health Service Journal, comes amid the looming threat of doctors and nurses striking over pay disputes this winter.

The Royal College of Nursing is balloting its 300,000-plus members over industrial action, while junior doctors have told ministers they will vote on strike action if their ‘unacceptable’ 2 per cent pay offer is not upped. Senior doctors are also considering action.

Physiotherapists across England and Wales today joined the chorus of NHS staff laying down the threat of strike action.

NHS trust leaders slammed the most recent pay demands from consultants, who are some of the best paid staff in the health service.

Consultants were this year awarded a 4.5 per cent pay rise by the Government. The BMA originally described it as ‘nothing more than an insult’.

One trust chief anonymously told the HSJ the rates represented ‘the biggest threat to (their trust’s) elective recovery’, while another boss described it as an ‘absolute hostage situation’.

A third said: ‘The BMA appear to be operating like football agents and pushing up the rates based on their own egos rather than their members’ wishes.’

While another added: ‘I think it’s misjudged.

‘The optics of people on six-figure salaries asking for many, many multiples of their hourly rate when many of their colleagues are doing the same but for time and half or double time, especially during a ‘cost-of-living’ crisis, are very poor.’

But other trusts said their consultants had not made any demands for more money, despite the rate card being widely publicised.

NHS Employers chief executive Danny Mortimer said: ‘The unilateral intervention of the main medical trade union to seek to push out the premium even further ahead of that already paid has been met with concern by our members.

‘The overwhelming majority are not minded to agree to the BMA’s demands, not least because of the much lower overtime rates available to other staff groups.’

However, Mr Mortimer added: ‘Our members do however absolutely recognise the substantive and very real concerns of senior doctors about the potential impact of pension growth and taxation.

‘The Government acted four years ago to alter annual allowance taxation, and we believe that abandoning its application to public sector pensions would be a sensible long-term action.’

He said: ‘With the NHS as overstretched and understaffed as it is, NHS trusts are repeatedly asking consultants to do more and more work on top of their normal working hours, which as well as regular overtime at standard rates of pay often includes many unpaid hours of work on top of that.

‘Consultants have had enough of being overworked, underpaid and undervalued in this way.

‘The most recent pay cut comes on the back of a fall in take-home pay of 34.9 per cent in real terms for the average consultant since 2008/9. The NHS is in crisis with almost 11,000 medical vacancies. 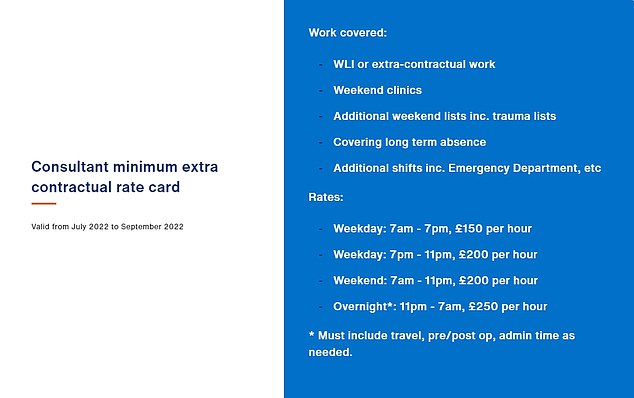 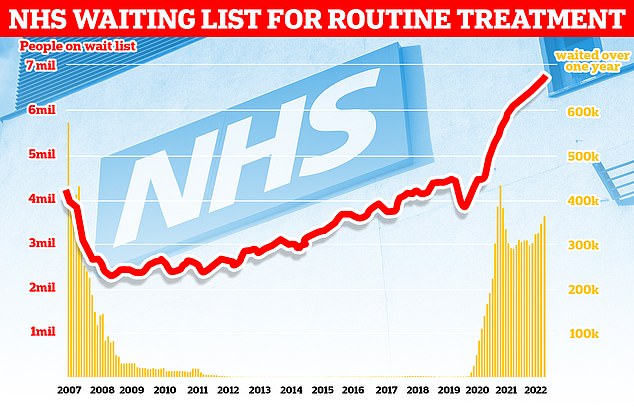 NHS England figures show 6.8million patients were in the queue for routine hospital treatment in July, equivalent to one in eight people. Nearly 380,000 have been waiting for over one year

‘Even more worryingly, over six in 10 doctors are suffering stress and work-related anxiety, half wish to reduce their hours and 20 per cent are considering leaving the NHS.

‘Instead of addressing these chronic staffing shortages, NHS trusts are forcing consultants to take on more and more work outside of their contracts.

‘We are clear that this is unsustainable and a driving force behind the exhaustion and burnout senior doctors are experiencing.’

The BMA said there is ‘currently wide variation in rates for overtime work’ across the country and many trusts are working ‘to suppress pay for this extra-contractual work’.

Dr Sharma said: ‘The BMA is clear that many of these rates of pay do not adequately reflect the skills, experience and responsibility of consultants.

‘The BMA’s rate card has been developed to address this and to ensure that NHS trusts adopt a fairer and more consistent approach to overtime pay.

‘The rate card has been based on rates already offered in parts of the country to reflect the market value of consultants’ work.

‘As well as suggesting rates of pay for extra work, the rate card has been specifically designed to address high levels of burnout by ensuring that consultants who take on this additional work can instead receive time off in lieu.

‘For too long the NHS has run on the goodwill of its staff and it must stop.’