A drunk British tourist was found naked on a Thai beach after an ‘all-night birthday bender’, telling police officers he had no recollection of the previous two days.

The man from Epsom, Surrey, had allegedly stayed up drinking beer and smoking marijuana – now legal in the country – at a party as he welcomed in his 30th on October 28, having arrived in the country for a wedding.

However, shocked locals on the paradise island of Koph Samui noticed him the next morning stumbling naked along the beach singing ‘football songs’. They watched in astonishment as he paddled through the sea and then swam away from the shore.

The British man (pictured standing naked on a Thai beach surrounded by police and locals), 30, from Epsom, Surrey, had allegedly stayed up drinking beer and smoking marijuana – now legal in the country – at a party as he welcomed in his 30th on October 28 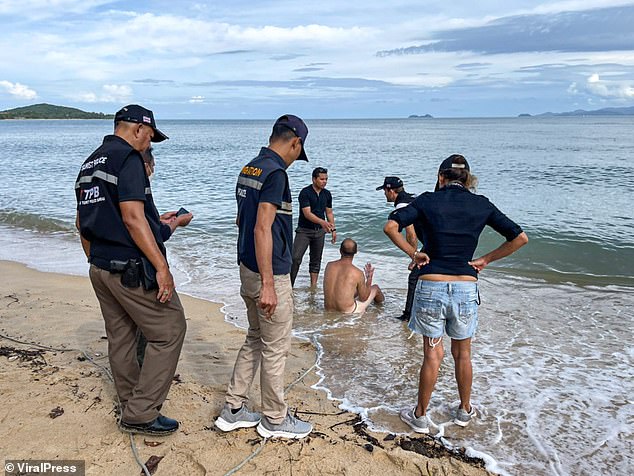 Shocked locals noticed the man (seen sitting down on the beach) the morning after his bender, stumbling naked along the beach singing ‘football songs’. They watched in astonishment as he paddled through the sea and then swam further away from shore

A kind fishermen tried to help the Brit, who allegedly became aggressive.

He is said to have yelled ‘go and meet with God’ while pulling the local into the sea off the coast of Maenam Beach on Koh Samui island.

Panicked cops arrived to drag the man ashore but he stood naked on the beach protesting, saying he wanted to meditate.

The night before, they go on an all-night bender, only to wake up the next morning with no recollection of the previous night’s events, thanks to Alan having spiked their marshmallows with drugs.

The rest of the film shows the protagonists’ adventure (which, as with the drunken Brit, involves some public nudity) to piece together their fractured memories and find Stu’s soon-to-be young brother-in-law Teddy – who was lost along the way.

In the morning of October 29, when the Brit was picked up, an interpreter told him to ‘go back to your hotel, shower and then go back to your meditating’ but the Brit refused, insisting he just ‘wants to relax’ and meditate. 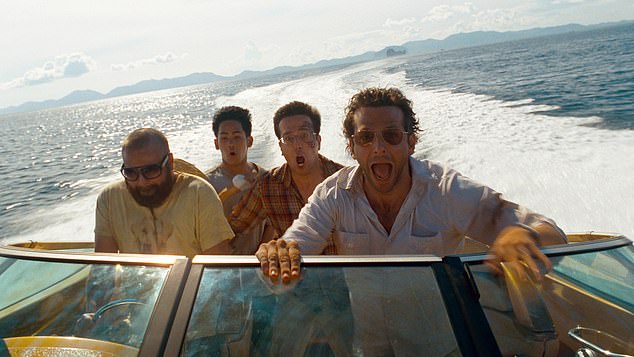 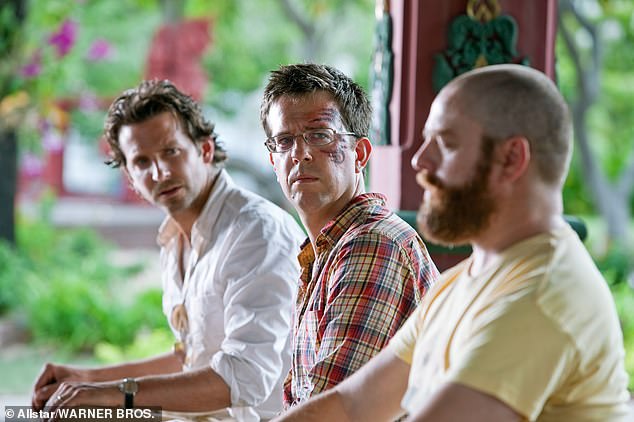 In the film – the night before the wedding – the trio (pictured) pulled an all-night bender, only to wake up the next morning with no recollection of the previous night’s events, thanks to Alan (right) having spiked their marshmallows with drugs. The rest of the film shows the protagonists’ adventure to piece together their fractured memories

Footage captured by locals showing the police bringing the British man ashore, who then spoke to the interpreter.

‘Yeah I understand, but this is not really the right time for that. You’ve got [counting] 12 policemen around you,’ the interpreter tells him.

The man replied: ‘No, I’m not going back. Let me worry about getting back and let me relax. I’m coming here to go to a wedding.’ Officers eventually took the British man to the local station where he had a drugs test, which came back negative.

The British man was fined for public indecency but will be allowed to return to the UK when his holiday ends. Several packets of marijuana were found in his hotel but police will take no action over that as it was recently legalised.

The fisherman who rescued the naked man also said he would not press charges for the alleged assault. He said: ‘I saw the tourist in the sea struggling to stay afloat so I was worried he could drown. I tried to help him into my boat but he was aggressive.

‘I don’t want him to be punished. I’m relieved that he is safe now. Maybe he had too much to drink and the weather was too hot for him, so he behaved a bit crazy, but I think he is a good person.’

Onlooker Theerayut, who lives close to the beach, said: ‘I heard the tourist shouting and singing songs on the beach. It was like football songs. I just assumed he was drunk so I didn’t go near him.’ 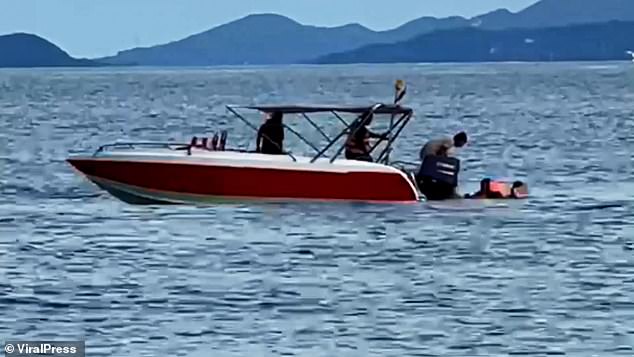 Pictured: A police boat is seen in the water as officers pull the drunk the British tourist ashore 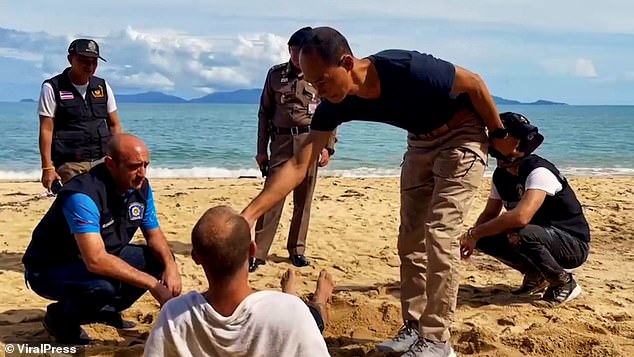 The man is said to have become aggressive when confronted by locals. Pictured: The British man is seen on a beach, now partially covered up, after his drunken naked escapades. He told the interpreter (seen left, crouching) that he just wanted to be left to ‘meditate’

Surat Thani Immigration Official Captain Aroon Moosikim said the Brit arrived on the island on October 10 and stayed at a nearby resort, but staff complained he was noisy and caused trouble for their other guests.

The police chief said: ‘The suspect is a 30-year-old British man who recently arrived in Thailand with a tourist visa.’

Captain Aroon added that the tourist joined a party over the holiday weekend but claimed he could not remember anything else. He said that his friends had not seen him since October 27 until he emerged on the beach on October 29.

He said: ‘The tourist told us he joined a party but he could not remember anything else. He also said he wants to bring everyone to meet with God.

‘We were having difficulty communicating with him because he was talking nonsense so we had to stop the questioning briefly. We will monitor him closely.’