When you’re exploring the Pyramids of Giza or wandering through the Valley of the Kings, the cost of your mobile phone bill is unlikely to be at the forefront of your mind.

But a new report has revealed that holidaymakers could face sky-high fees of up to £787 a week for using their mobile phones abroad this summer.

British mobile networks have made headlines this year for bringing back roaming charges in Europe, following the UK’s departure from the EU.

Mercifully, roaming fees for EU countries typically come to less than £14 for a week’s holiday, and are free for O2 and Virgin Media customers.

But charges can quickly add up for further afield destinations, according to comparison site Uswitch.

Visitors to popular tourist destinations including Egypt and Morocco, as well as South America, Saudi Arabia and UAE, are at risk of racking up the biggest bills, depending on which mobile network they use.

However, a survey of 2,000 UK adults revealed that a quarter of mobile users (24 per cent) have no idea what using their phone abroad will cost, despite one in seven (16 per cent) worrying about big bills on their return.

‘Millions of Brits will soon be enjoying a hard-earned holiday abroad, and thoughts about the cost of using their mobile will be far from their mind,’ said Ernest Doku, telecoms expert at Uswitch.

‘For many, it will be their first foreign holiday since EU roaming fees returned, so it’s important to remember that you’re now likely to face extra charges for using your phone.’

Some providers like Vodafone let customers use their domestic monthly allowance of calls, texts and data while on holiday outside the EU for £6 a day.

This means a week’s break will cost no more than £42 in the 156 destinations Vodafone covers.

However, some popular destinations are excluded from overseas data, call or text bundles.

For example, consumers travelling to Egypt face charges of up to £7.20 a MB for data, calls costing £5 a minute, and texts billed at 60p each. 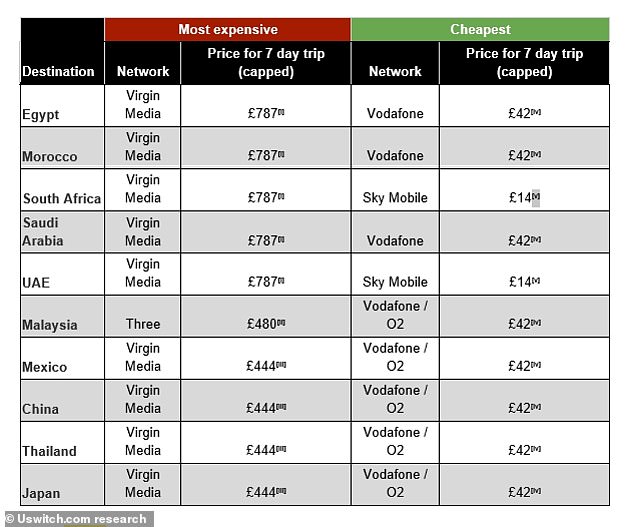 Roaming Red List: Most costly holiday hotspots to use your phone abroad based on a seven-day holiday with a person using 1GB mobile data, making 20 minutes of calls and sending 10 texts each day 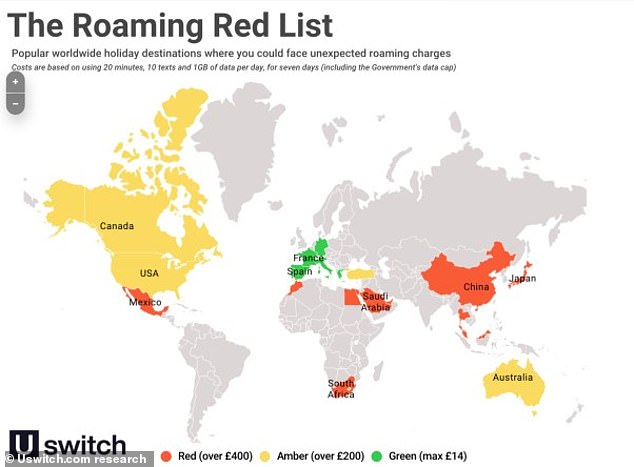 Map shows popular worldwide holiday destinations where you could face unexpected roaming charges, based on using 20 minutes, 10 texts and 1GB of data per day, for seven days (including the Government’s data cap) Chart

Roaming is the word used to describe using your phone while you’re overseas. You’re ‘roaming’ the moment your phone is detected on an overseas network

Before Brexit, EU roaming regulations meant you could use your monthly allowances of calls, data and texts while you were in 28 destinations in the EU for no extra charge.

Since the UK is now no longer part of the EU, these roaming regulations don’t apply to Brits, so now you’ll get roaming charges added to your bill if you use your phone abroad, depending on your telco provider.

This means that a holidaymaker using 1GB of data, making 20 minutes of calls and sending ten texts a day could end up with a £787 bill.

After leaving the EU, the UK government introduced a worldwide roaming data cap of £45 a month to help travellers avoid huge bills.

Without this data cap, holidaymakers in Egypt using 1GB of data a day could potentially run up a bill of more than £50,000 in a week.

Once they hit the cap, however, customers will be unable to use any more data.

Uswitch found that an O2 mobile user visiting Morocco would hit the £45 limit after using just 6MB of data, (based on O2’s cost of £7.20 a MB) – barely enough to browse three web pages.

A huge variation in charges between providers means British tourists visiting Turkey can pay just £2 a day with Sky Mobile to access their full mobile plan allowance, while those on EE would need to spend over £20 to get a similar deal.

The UK government’s data cap does not cover calls and texts, which can be particularly expensive outside the EU.

A Virgin Mobile customer visiting Egypt, Morocco, South Africa, UAE or Saudi Arabia will be charged £5 per minute for making a call or checking their voicemail, and 60p for sending a text. 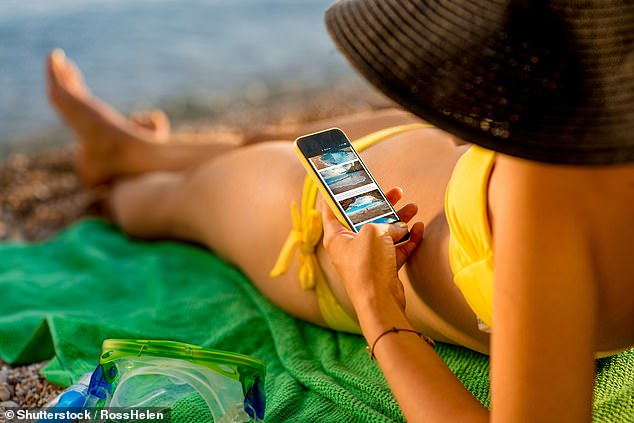 The UK government’s data cap does not cover calls and texts, which can be particularly expensive outside the EU

With glaring differences between countries and providers, it is not surprising that many British mobile users are baffled by roaming charges.

One in four consumers (24 per cent) say they will use their phone less on holiday as they’re confused about charges, while a third (33 per cent) called for roaming to be abolished.

‘There’s a huge difference in costs between countries, so it’s worth checking with your provider how much you will pay to make calls, send texts and use data in your destination, and if there are any passes or add-ons that could help you use your data abroad for a minimal cost,’ said Doku.

‘With a quarter of mobile users unaware of what roaming costs they face, providers must do more to guide customers through these changes and offer cheaper options, particularly on popular non-EU destinations not covered in their travel bundles.

‘If you regularly travel abroad, it may be worth considering switching to a provider without EU roaming fees, or looking at a 30-day SIM-only deal to reduce your charges while you’re away.’

HOW TO AVOID HEFTY ROAMING CHARGES ON HOLIDAY

1. Download at home, not away: Download any maps, shows, films and music before travelling to avoid data costs abroad. If using your mobile on holiday, focus on low-data activities and apps. An hour of Google Maps will only eat up 5MB, while streaming an HD movie for the same time will use about 2GB – 400 times as much.

2. Check the cap fits: Even if you are paying for a bundle to roam abroad, you may not have the same data allowances as do in the UK. Check your provider’s fair usage policy, which will govern how much data you can use before you incur extra charges. You can also set up a spend cap with your provider to avoid any surprise bills when you return.

3. Switch off voicemail: When overseas, you can expect to pay the same per-minute rate for checking your messages as you do for making calls. Yet sometimes even receiving a voicemail on holiday can cost you. If your provider includes this charge, call them before you travel and get it switched off.

4. Wi-Fi wins: To save your data allowance, use hotel and cafe Wi-Fi connections whenever possible. You can also enable Wi-Fi calling or use services such as Whatsapp to make audio calls without using your minutes. Make sure access points are safe and secure before logging on and avoid activities like online banking on public networks.

5. If in doubt, engage flight mode: Flight mode is not just for when you’re up in the air – although it will stop any chance of connecting to other networks while flying across the countries. Activating it on holiday, particularly in destinations with high fees on calls, texts and data, can remind you to watch your usage and save you from unexpected costs.

6. Play it again SIM: If you’re with a provider that has roaming charges it’s worth considering buying a one-month SIM-only deal that will cover you for your time away. Lebara, which runs off the Vodafone network, offers a 5GB monthly SIM-only contract for £5.95, which comes with free roaming in the EU and India.