It is a trendy tipple which has seen sales soar in recent years.

But now UK gin is under threat – from a bug which attacks juniper trees.

The fungus-like pathogen spreads through the trees whose berries are used to make gin.

British gin sales reached a new record in 2019, with 83million bottles worth more than £2.6billion sold. The industry notched up a further £672million of exports.

However, scientists have warned of the threat posed by the Phytophthora austrocedri pathogen – thought to have been introduced to the UK in the 1990s.

UK gin is under threat from the fungus-like Phytophthora austrocedri pathogen which spreads through juniper trees whose berries are used to make gin. (Stock image)

Once it enters the roots of juniper trees, it starves them of nutrients, turning them bronze and potentially killing them in months. The trees are already under threat from loss of habitat.

But she added: ‘This British gin market could be under threat from…Phytophthora austrocedri.

‘We are also very worried about juniper trees because they are one of only three conifer species native to the UK.’

The pathogen is said to be an ‘aggressive tree-killer’ which lives in soil and thrives in water-logged conditions. 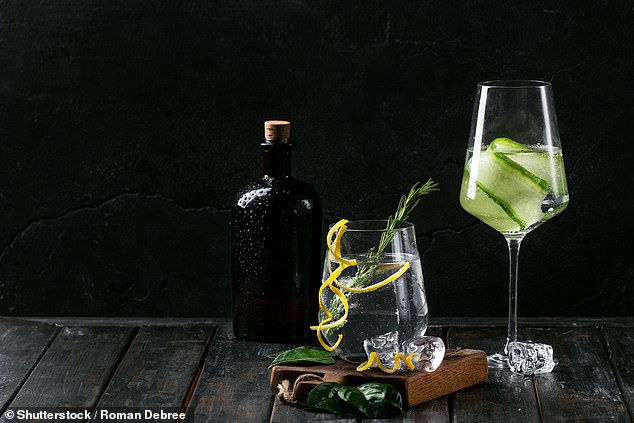 In the worst-affected areas 50 to 60 per cent of trees can be wiped out. It is thought to have been introduced to many woodlands by well-meaning conservationists trying to increase juniper numbers by planting nursery specimens in the wild.

In nurseries, the junipers can become infected with the pathogen from imported plants.

Most juniper berries come from Scotland, which is home to 70 per cent of the trees. However, in a ray of hope, researchers have found that some trees appear to be resistant to the pathogen, which cannot spread through their roots.