British farmers have enjoyed a bumper Brussels sprout harvest this year after the UK’s sweltering summer, with giant specimens double the size of normal crops.

In the lead up to Christmas the demand for the popular festive vegetable rockets, often leaving many yuletide dinner makers disappointed.

But thanks to the scorching summer sprouts are in abundance, meaning there may be less chance of not having the staple Christmas item on plates this year. 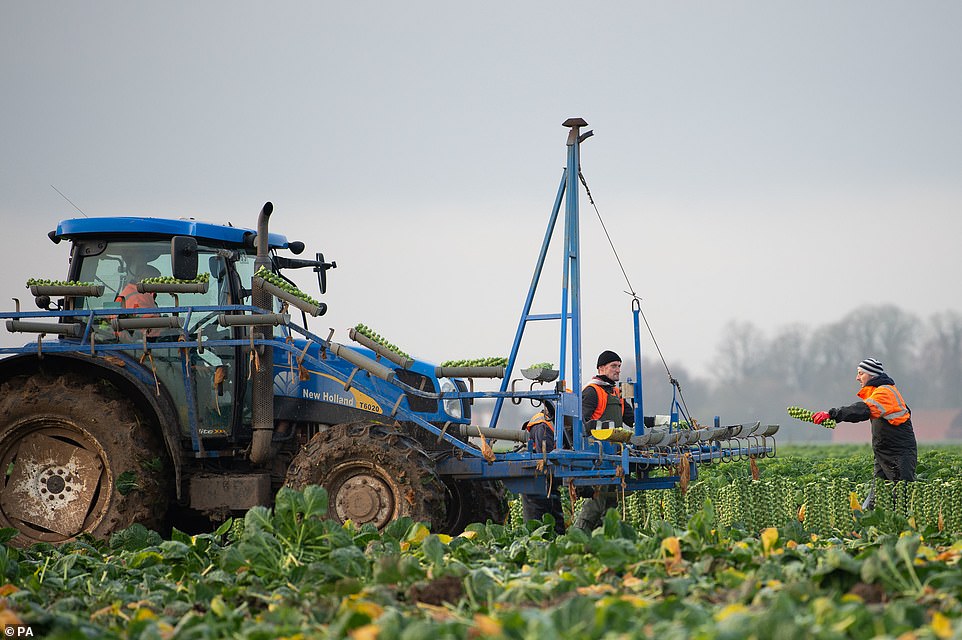 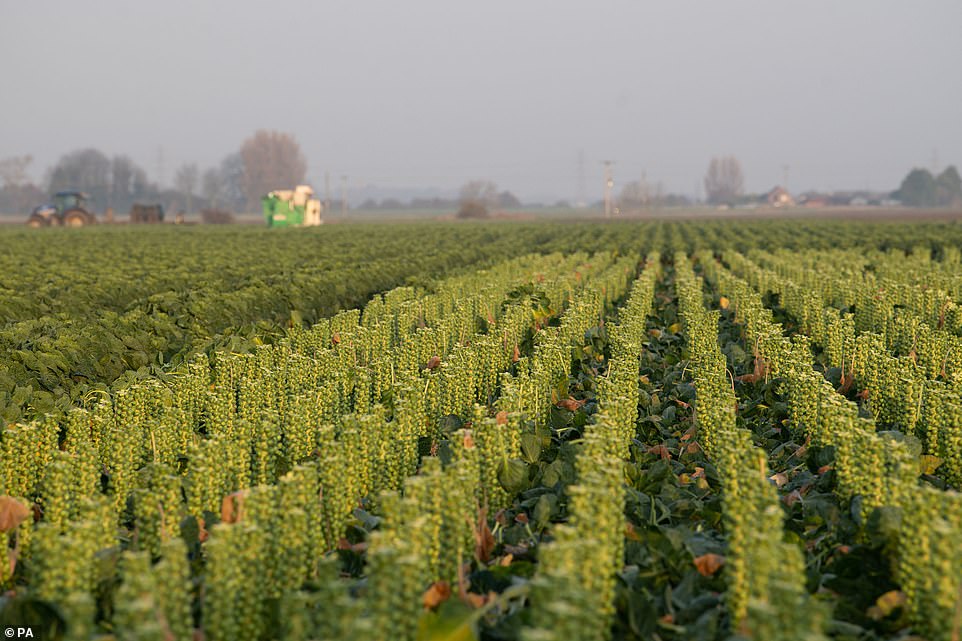 Teams head out in to the expansive fields filled with sprouts and harvest them, some of which are said to be double the normal size 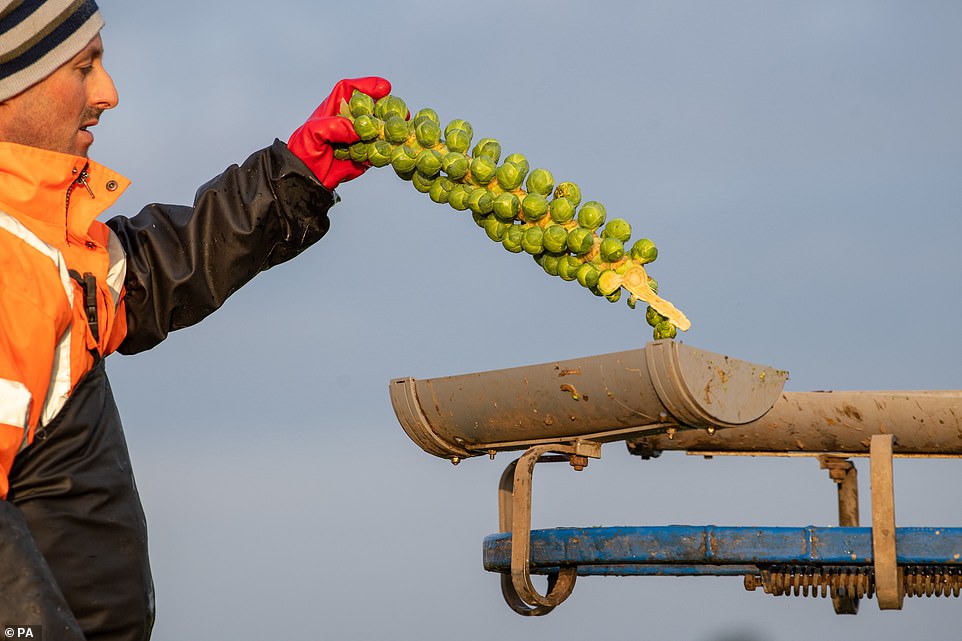 Lincolnshire-based fruit and vegetable wholesaler TH Clements, one of the UK’s biggest growers of brassica, has reported that sprout yield is up by 20 per cent on 2019.

Staff have been working hard in the expansive fields of Brussels sprout, as well as other vegetable in the brassica family, to ensure they can meet the needs of Christmas feasts.

This year’s harvest will see some whoppers, up to 50 per cent bigger than usual, after a warm spring and summer  helped growth of the buttons – the part of the plant which is eaten.

Richard Mowbray of TH Clements, based in Benington, near Boston, said: ‘The year so far for sprout production has been very good and we’re getting colder weather now just at the right time. 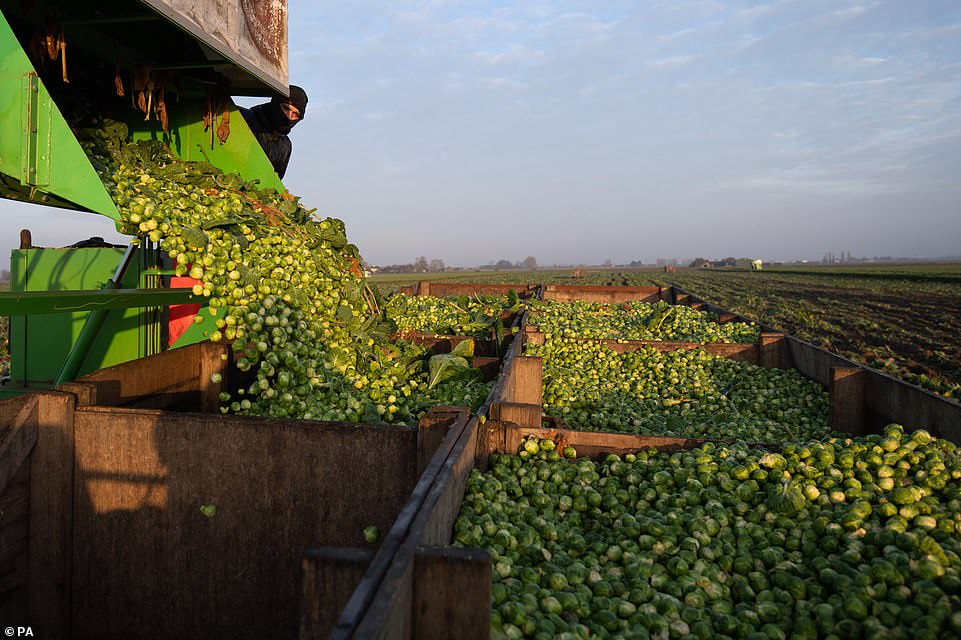 Lincolnshire-based fruit and vegetable wholesaler TH Clements (pictured), one of the UK’s biggest growers of brassica, reported their sprout yield is up by 20 per cent this year 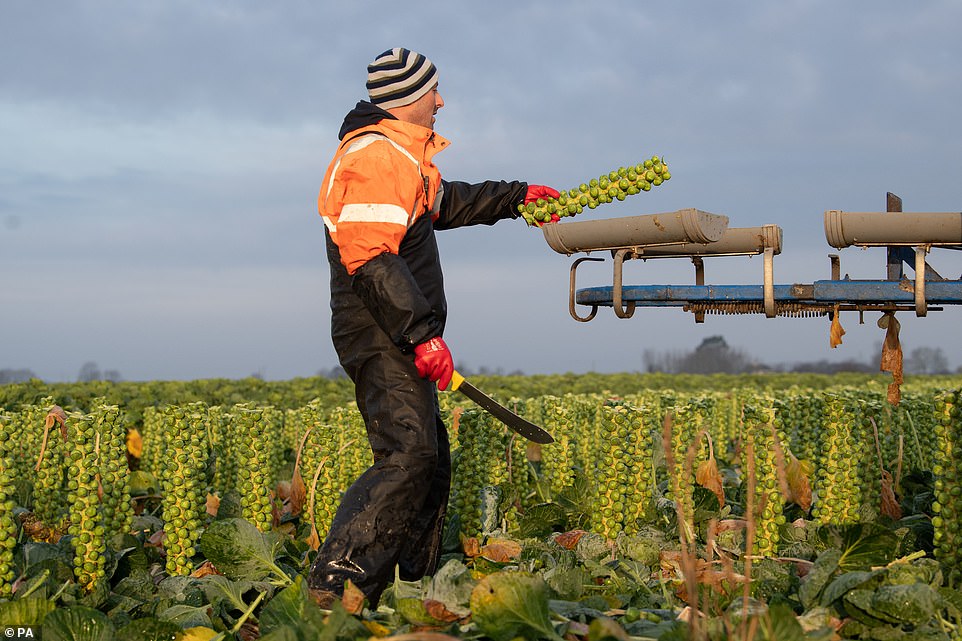 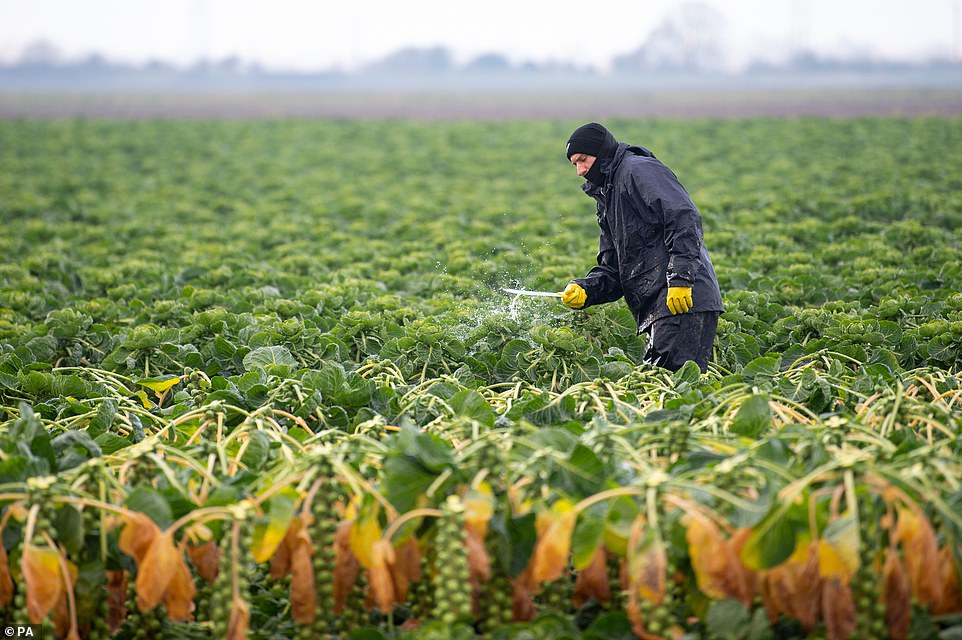 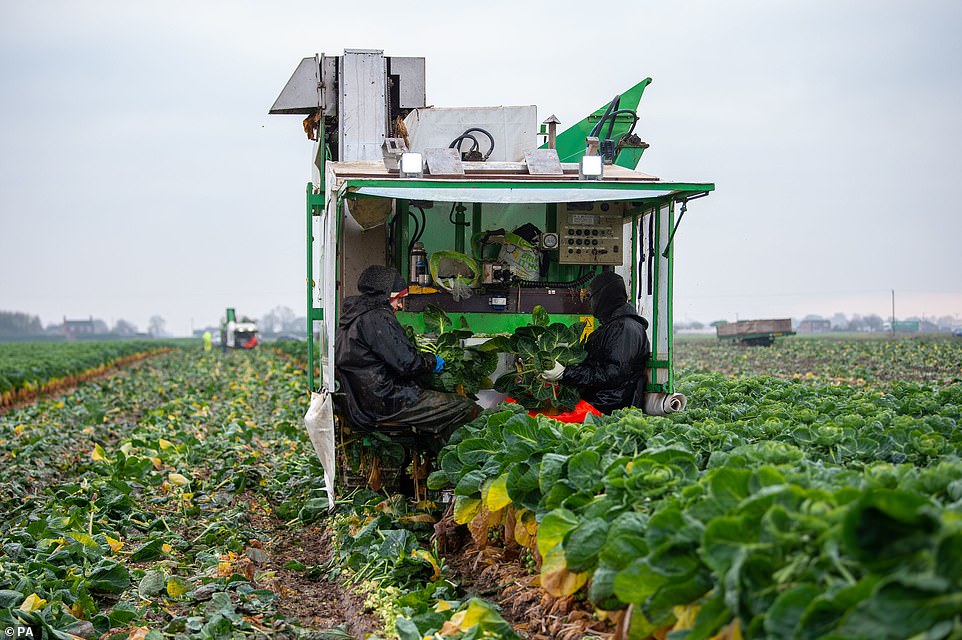 ‘During the last few weeks we have had some windy days which helps to blow the old leaves off the plants and is again good for helping the buttons to remain blemish free.

‘If the weather stays like this then this will be the best Christmas for sprout quality in at least five years.’

Tesco, which is supplied by TH Clements, has reported a near 20 per cent rise in sprout sales this year compared with 2019.

The supermarket giant’s sprout expert Rob Hooper said that ideal weather from May onwards has led to a great crop.

‘This year the UK will get some of the best quality sprouts we’ve seen for at least five years and great news for cooks is that the larger size will mean that they will be easier to peel,’ he said.

‘Nobody likes the chore of peeling sprouts but this year, because of their size, customers will need fewer of them on their Christmas dinner plates and that means less work in the kitchen. 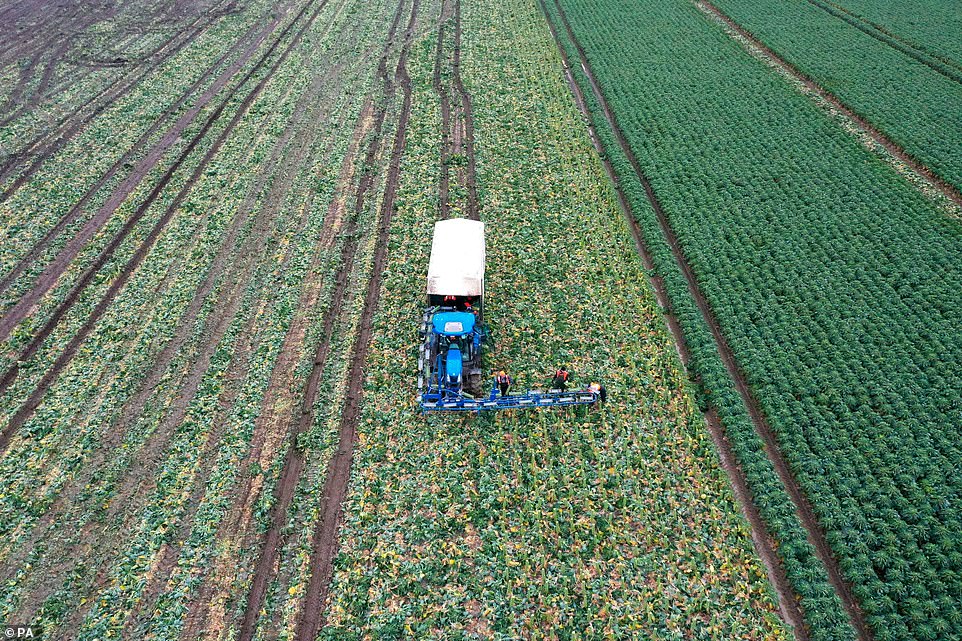 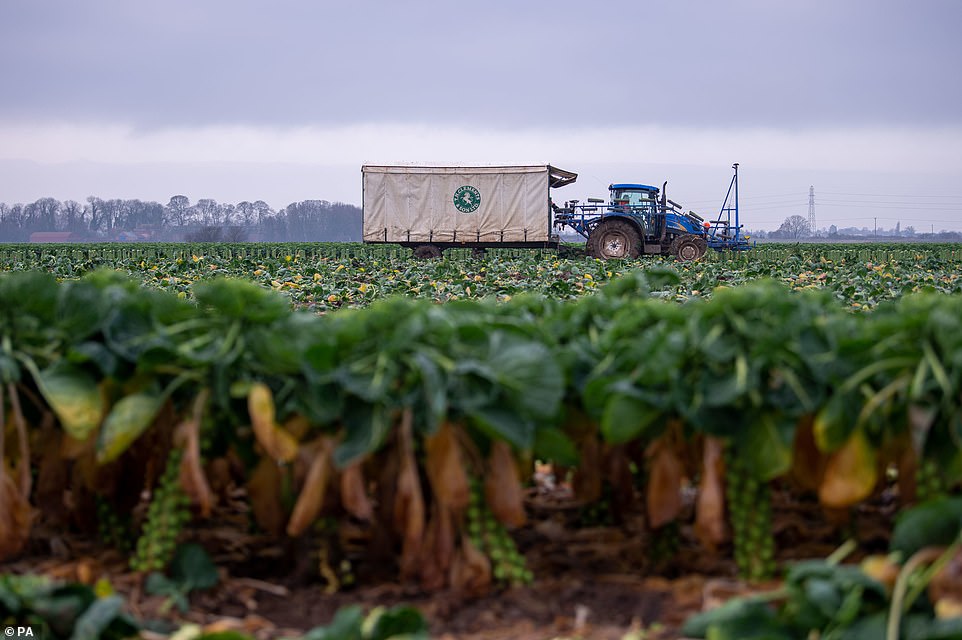 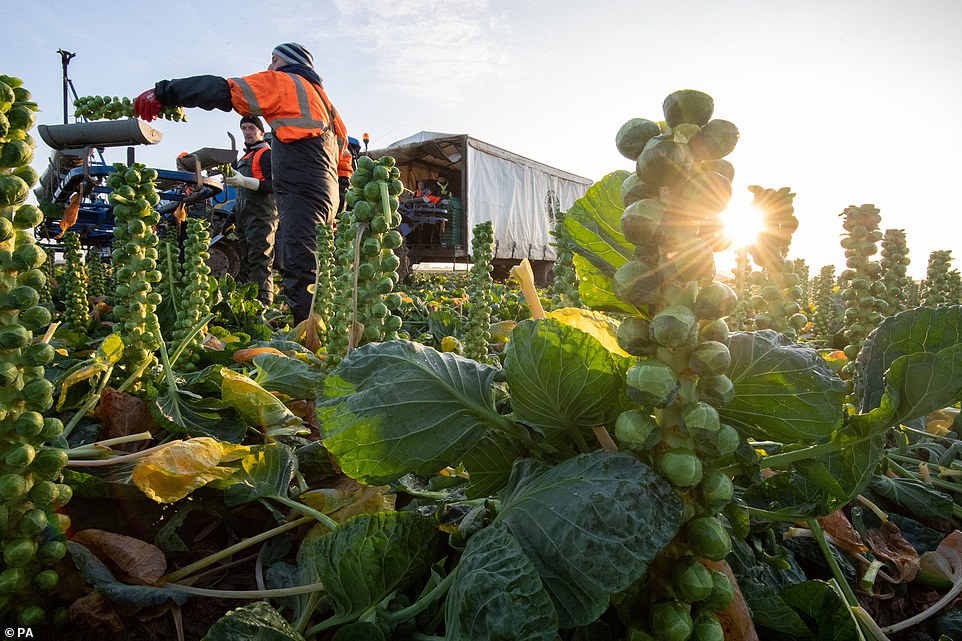 The larger sprouts are also ideal for cooks, as the bigger they are the easier they are to peel 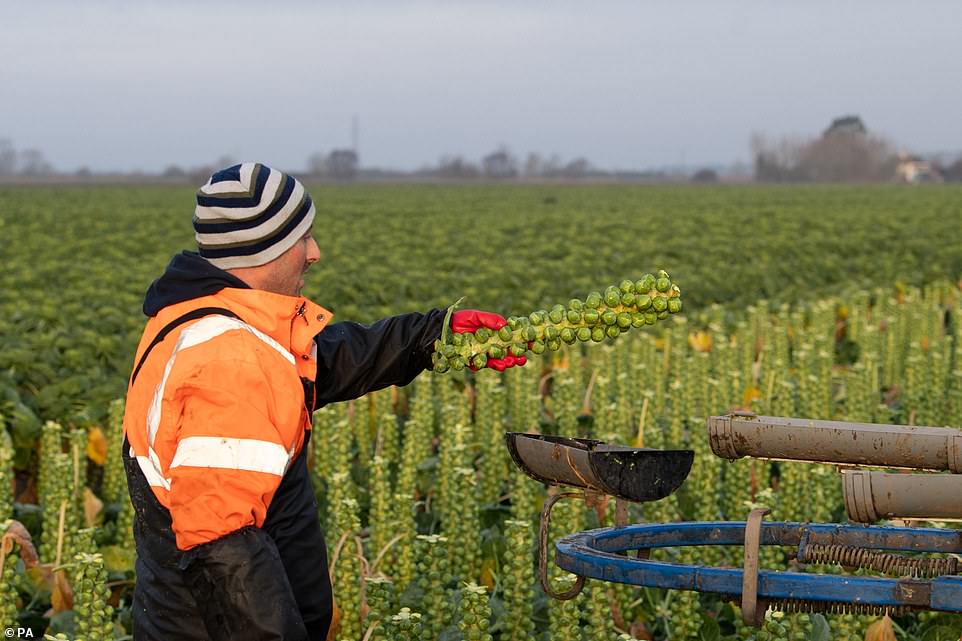 ‘Most of the UK sprouts for the winter season are planted in May and this year we not only had the warmest spring on record but a good summer with the right amounts of rain for fruit and vegetables.

‘The early life of the crop from planting through until the early autumn, is important to the ultimate quality of the sprouts in producing strong tall stalks ready for producing the buttons – the bits of the sprouts which are eaten.’

Growing conditions this year have produced stalks of sprouts taller than growers have seen in recent years.

It has also allowed buttons to form with a good amount of space between each one – important from a quality point of view as it allows air flow which helps them to stay blemish free.

And the crop success was not just limited to Lincolnshire, in Staffordshire one of Britain’s oldest Brussels sprout farms has also seen a 20 per cent increase in numbers compared to previous years. 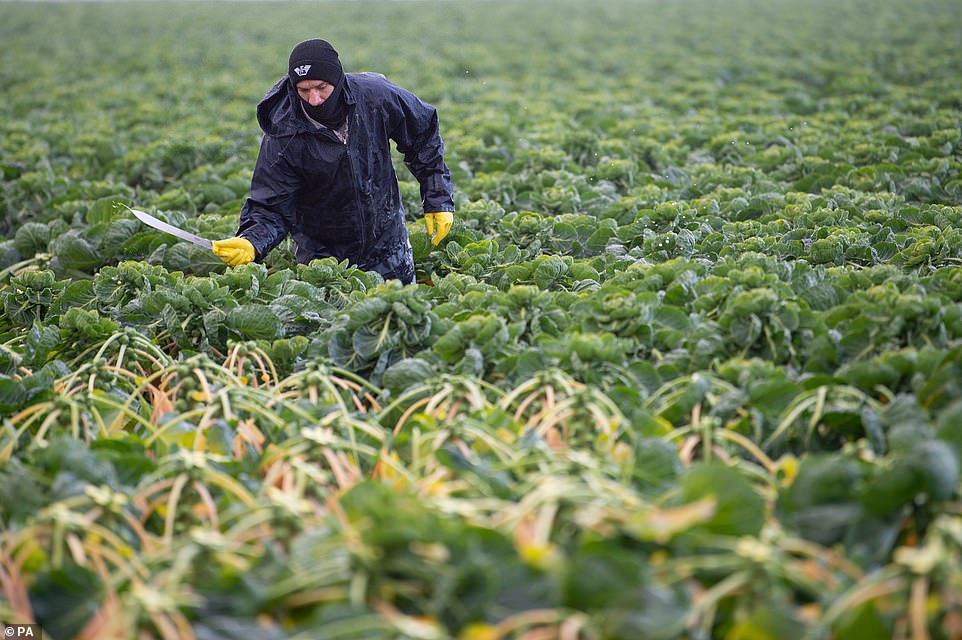 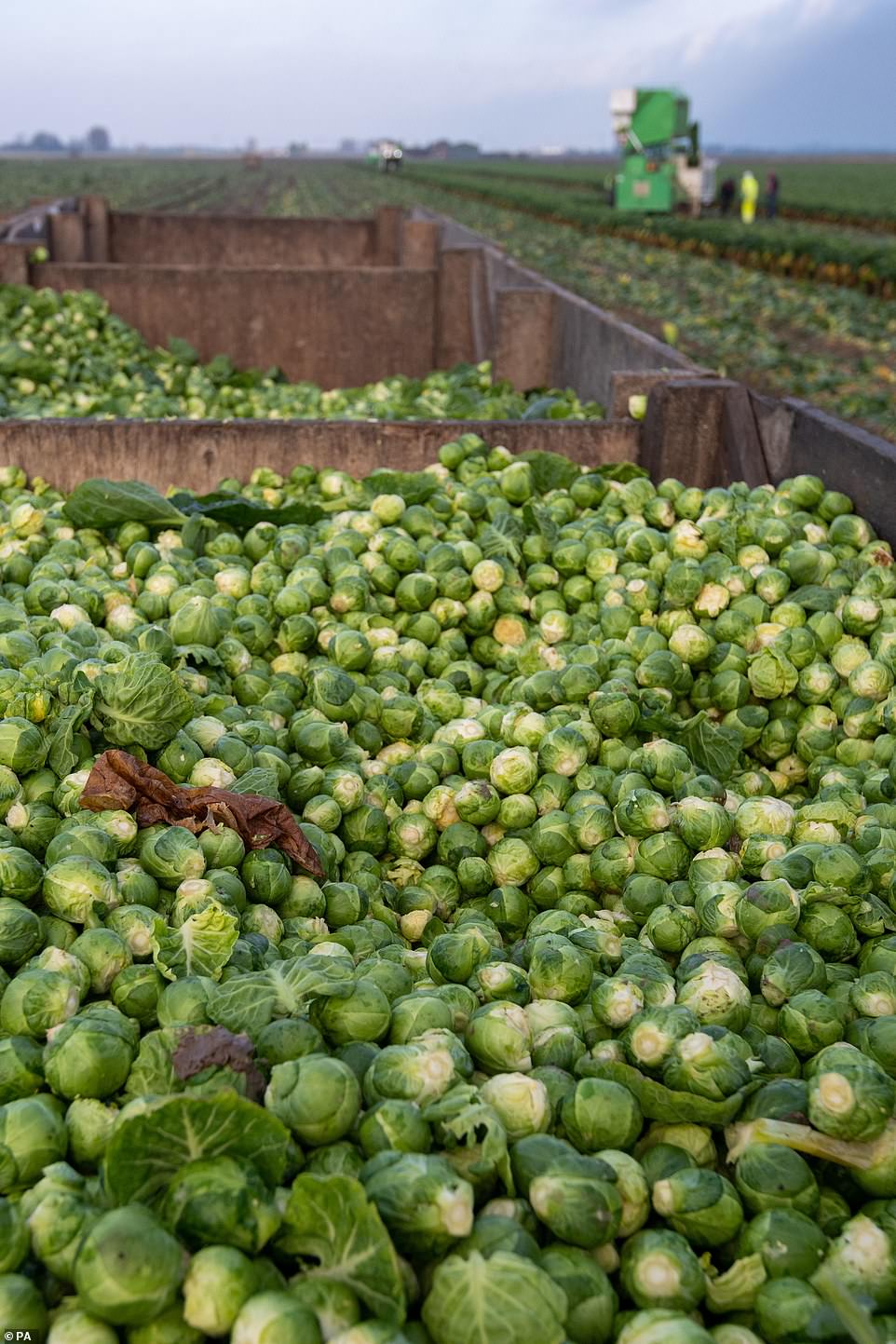 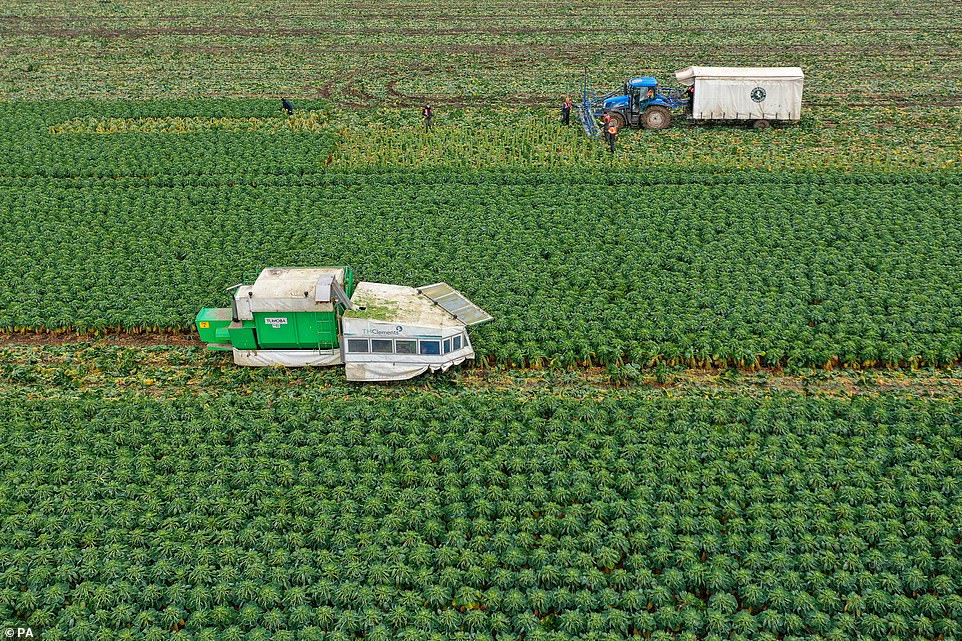 Essington Farm, owned by Richard Simkin, has seen a higher demand than ever for the festive vegetable, which Richard says is due to shoppers opting for independent retailers over supermarkets during the pandemic.

About a quarter of a million of the Brussels sprouts will be hand-picked in Christmas week while farm staff will work all daylight hours cutting the stems off the plants with machetes before selling them direct to customers from the farm shop.

The latest news of bumper harvests comes as UK supermarkets have been advised to start stockpiling supplies of vital foods and other necessities amid panic-buying fears ahead of a potential No Deal Brexit in less than three weeks’ time.

There are fears of shortages of vegetables – which predominantly come from EU nations – for months at the start of 2021 if negotiators locked in last-gasp talks today fail to bridge a gaping chasm on fishing rights and trade rules. 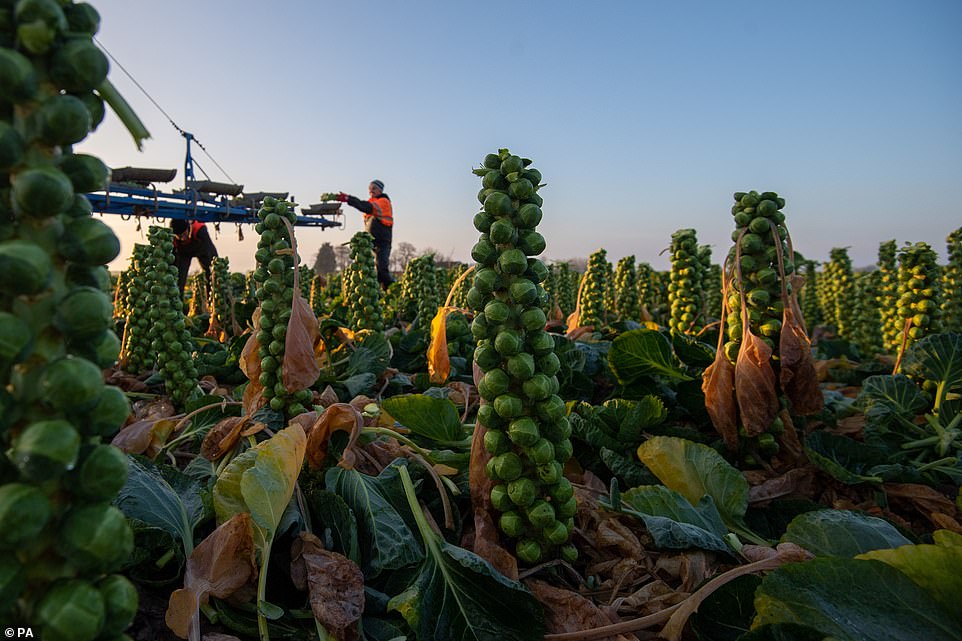 Elsewhere other Brussels sprout farms and farmers have seen an abundant crop, due to the perfect growing conditions 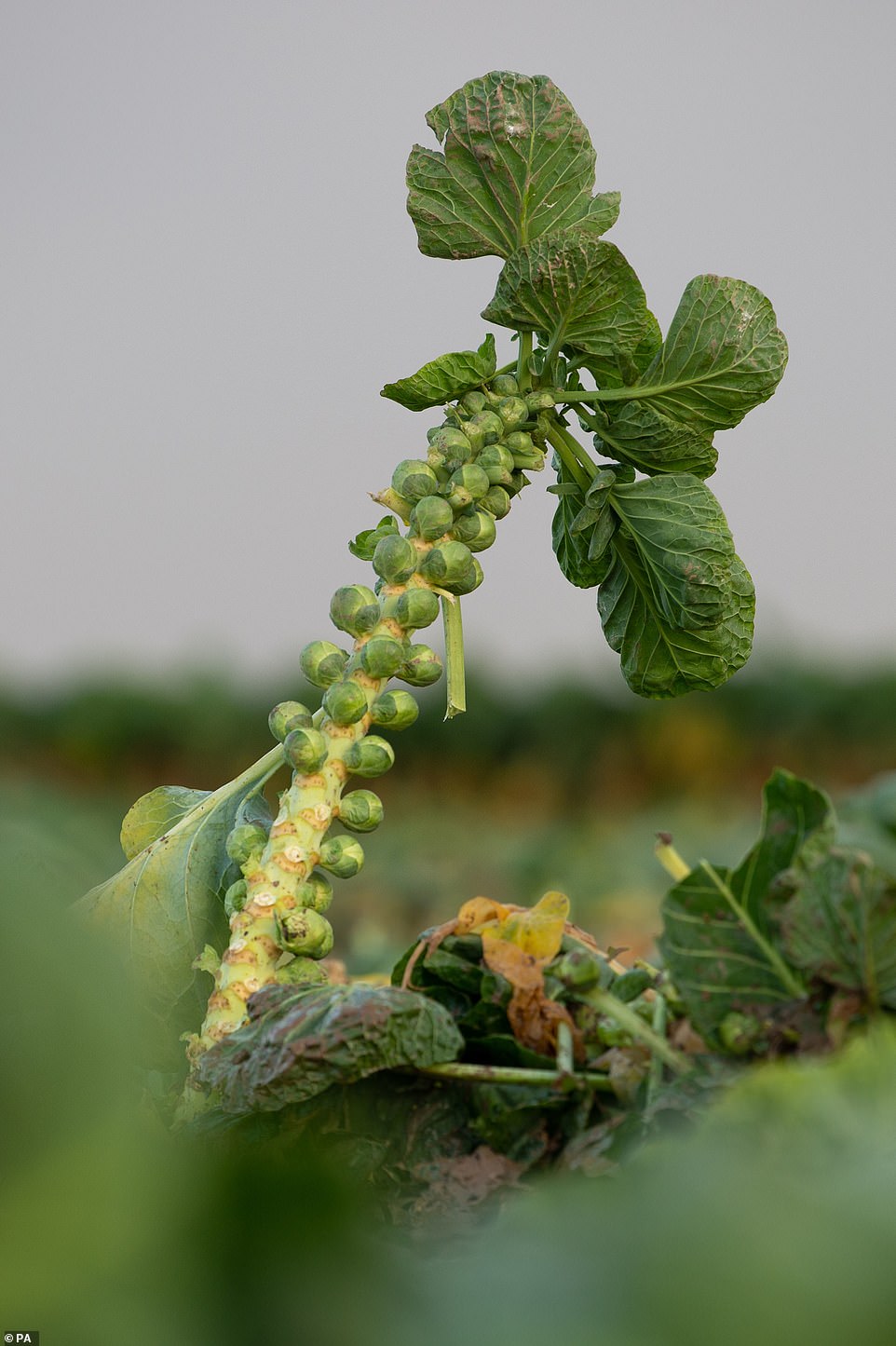 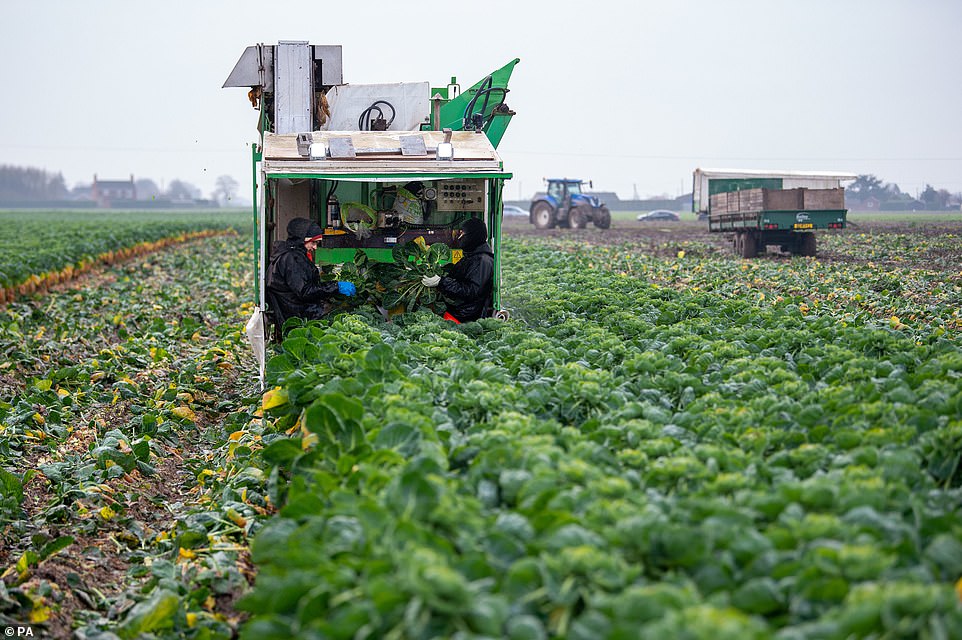 Prime Minister Boris Johnson announced today that deadlocked free trade talks would continue, stepping back from the brink of a No Deal departure today.

He had previously suggested today was the final deadline for both sides to make an agreement after months of discussions or prepare for a hard departure on December 31.

While Brussels sprouts can often divide opinion, somewhat like Marmite, it was named the nation’s favourite green vegetable in a recent Waitrose survey, just edging out broccoli.

Sprouts were top, chosen by 27 per cent – just 1 per cent ahead of those plumping for broccoli. Peas lagged behind, on just 17 per cent.

Sprouts proved to be more popular with men than with women.