Former world champion Amir Khan was left ‘absolutely terrified’ after he was robbed of his £72,000 luxury watch at gunpoint by two thugs while out with his wife in East London last night.

The 35-year-old boxer has claimed that a gun was pointed in his face as his assailants stole his Franck Muller Vanguard Chronograph before speeding off in a car in Leyton at around 9.15pm.

Assuring fans on Twitter that he and his wife Faryal Makhdoom were unharmed during the incident, Khan said: ‘Just had my watch taken off me at gun point in East London, Leyton.

‘I crossed the road with Faryal, luckily she was few steps behind me. Two men ran to me, he asked for my watch whist having a gun pointed in my face. The main thing is we’re both safe.’

Hours before the incident, Khan was pictured with a fan while shopping in Oxford Street wearing his flashy watch, which is worth around £72,000 and is studded with 719 diamonds.

And the Olympic medallist was also wearing it in an Instagram post from a charity do at the Grosvenor House Hotel the night before – raising fears he may have been specifically targeted.

Amir Khan and wife Faryal pose on the red carpet during the BT Sport Industry Awards 2017 at Battersea Evolution on April 27, 2017 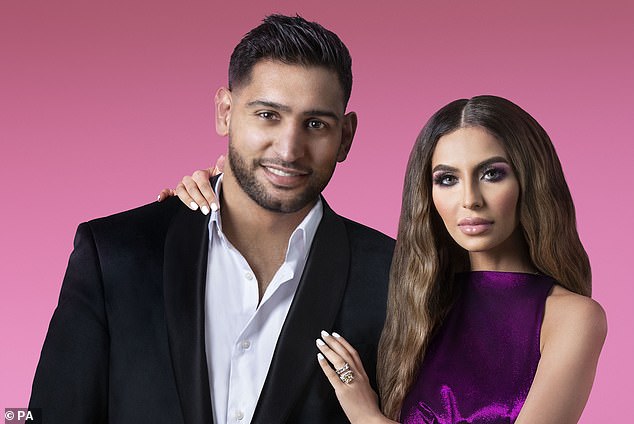 An eyewitness told The Sun that Khan was visibly shaken by the ordeal, adding: ‘They were not hanging around. They got straight into the car and fled.

‘Amir had enjoyed a lovely evening with his wife and had been shopping earlier in the day. It raises real fears he was a deliberate target. It’s extremely serious. He was left absolutely terrified.’

In a post to her Instagram account late last night, Khan’s wife Makhdoom also claimed the watch was stolen and posted its serial number in a bid to try and ‘find out who’s done this’.

‘A man aged in his 30s is alleged to have been approached by two males who threatened him with a firearm before stealing his watch and fleeing. There were no reports of any shots fired or any injuries.

‘Police responded and conducted an area search. At this very early stage there have been no arrests. An investigation has begun and police are following a number of enquiries.’

Khan and Makhdoom, who got married in 2013 in New York, have three children, Lamisah, Muhammad and Alayna.

Former world champion Khan last fought in February in Manchester, where he lost to Kell Brook.

Last week he was booed by a crowd in Manchester after he refused to commit to fighting Conor Benn. 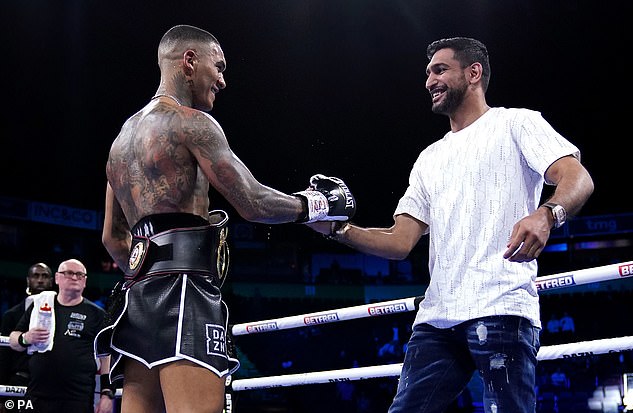 Amir Khan was booed when he entered the ring in Manchester after Conor Benn’s victory on Saturday, April 16 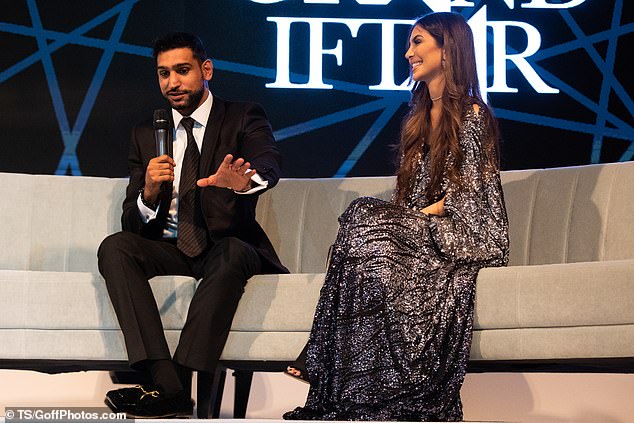 Khan, pictured here with wife Faryal, had previously been targeted by gang members trying to steal his £100,000 Range Rover in Birmingham in 2012

Khan had entered the ring to congratulate Been after got the better of South African Chris van Heerden on Saturday and didn’t commit to a blockbuster bout against the 25-year-old.

‘I am just here to enjoy the boxing. I’m a fan. I’m here to support him’, Khan said ringside after Benn’s victory. ‘At the moment to spend time to my family but who knows. If I comeback then we can see where we go from there. He is a young and hungry lion.’

In 2012 Khan was forced to call upon the skills that made him a world champion boxer after an armed gang ambushed the British boxer.

It was reported that Khan and his brother Haroon were caught up in a street brawl when up to six armed gang members attempted to steal Khan’s £100,000 Range Rover.

And despite trying to block the duo’s path by using a 4×4, Khan and his brother fought back before fleeing from the scene in Birmingham.

An onlooker is quoted in The Sun as saying: ‘These guys tried to jump Amir and his brother but they picked on the wrong blokes.

‘They parked their car in front of the Range Rover. At least one had a cosh. One slapped Amir and clipped him on the lip but Amir pulled back and knocked him out cold.

‘Then five of them went for Amir and Haroon – but they stood their ground and these guys got dropped one by one. They left these men with cuts and bruises but all they were doing was defending their property.’