By Matthew Lodge For Mailonline

A British Airways passenger who left his headphones on a plane now watches the person who picked them up take them to work every day on a tracking app.

The 33-year-old city worker lost his Apple AirPods on a flight from Austin, Texas, to London Heathrow, three weeks ago.

He reported them missing after the flight, but later used the Find My app, a service that lets people track the location of their Apple devices, on his iPhone in an effort to find them.

Now the fuming traveller has been left tracking the daily trips to and from work of the person who took the wireless headphones.

He says the AirPods, which can cost up to £240, travel from a flat in central London to the British Airways Global Learning Academy, at Heathrow Airport, every day.

He said: ‘I left my AirPods in the seat back on a flight from Austin three weeks ago.

‘I reported it to lost property.’

He posted photos on Facebook he says shows where they are now, having tracked them down on the Find My app.

British Airways says it is helping the passenger after he reported it to the airline.

A spokesman for the airline said: ‘We are currently investigating the matter.’

MailOnline understands the devices could have been taken by an airport worker and not a BA employee.

People on social media have rallied around to support the man, with some suggesting he takes matters into his own hands.

Fellow flyer Ian McKenna said: ‘Unbelievable, or rather it should be.

‘Certainly should be, so much for To Fly, To Serve.’ 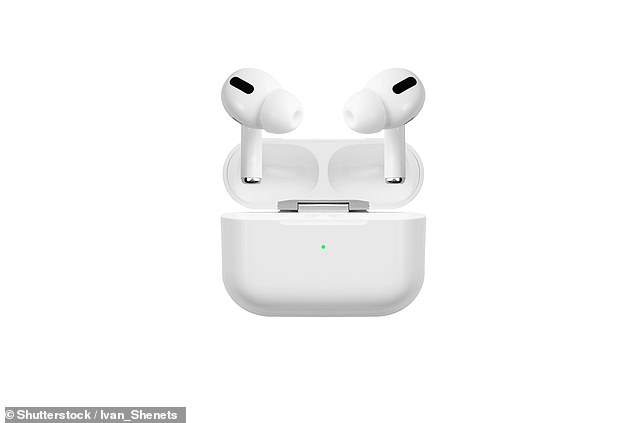 The 33-year-old city worker lost the Apple AirPods (stock image), which are type of wireless headphone, on a flight from Austin, Texas to London Heathrow

Angelo Edades joked: ‘Can you do a stake out near the address?

‘This is good entertainment.’

Nikki Nicholson said: ‘Phone the police, surely it’s their job to get them back for you.’

Yet Alan Cox said: ‘Maybe not be negligent in the first place and take responsibility.’