The coronavirus pandemic prompted British Airways to speed up the scrapping of its 31-strong 747 fleet.

And the first of its last remaining jumbos to be retired was pictured taking off from Heathrow Airport today on its final journey. It flew empty to Spain – where it will be scrapped.

The aircraft, flying under flight number BA9170E, was spotted taking to the skies around 10.30am, bound for Castellon after clocking up 50 million miles in the air over 25 years. Aviation enthusiasts gathered nearby to get one last glimpse and snap one last picture of the plane.

The first of the last remaining British Airways 747s to be retired is pictured taxiing towards the runway at Heathrow today before embarking on its final journey. It flew empty to Spain, where it will be scrapped 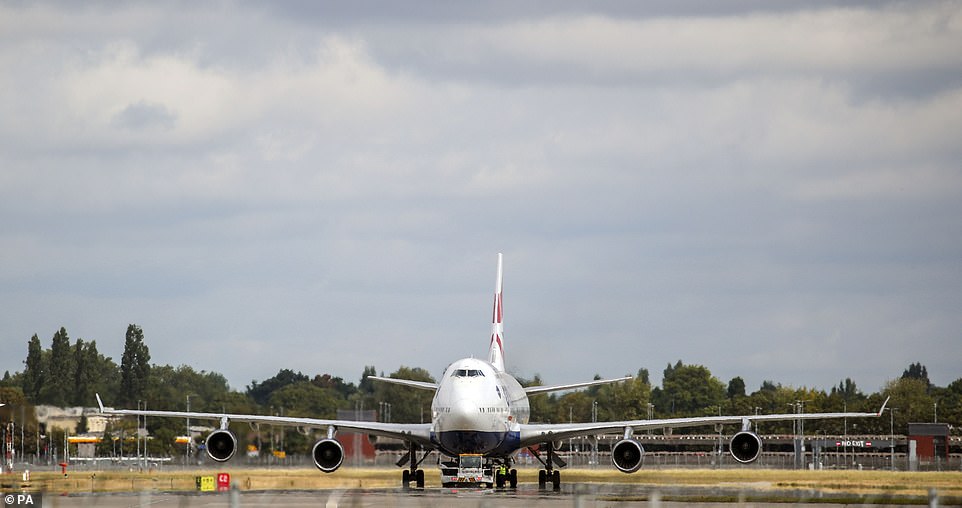 The jumbo jet is pictured getting ready to depart Heathrow for the final time. Last month, BA announced that all 31 Boeing 747s in its fleet had flown their last passenger services

The aircraft received an emotional farewell from the Nats Air Traffic Control Tower at Heathrow Airport.

On a video of the take-off released by BA, the air traffic controller can be heard telling the captain: ‘Speedbird 9170, it’s farewell from all of us here at Nats Heathrow control tower.

The captain replied saying: ‘Thanks for all of your assistance over the years. It’s been a pleasure and a privilege and on behalf of all pilots and crew who fly this aircraft, it is with a heavy heart that we say goodbye to this aircraft on its last flight. Thank you very much.’

Last month, BA announced that all 31 Boeing 747s in its fleet had flown their last passenger services ‘with immediate effect’ and would be retired.

BA explained: ‘British Airways’ fleet of 747s are being retired at an accelerated rate as a result of the devastating impact the Covid-19 pandemic has had on the airline and the aviation sector, which is not predicted to recover to 2019 levels until at least 2024.’

The aircraft that retired today first entered service in 1994 and last flew in April, when mid-lockdown it flew back from Lagos, Nigeria, as part of the UK’s repatriation efforts. 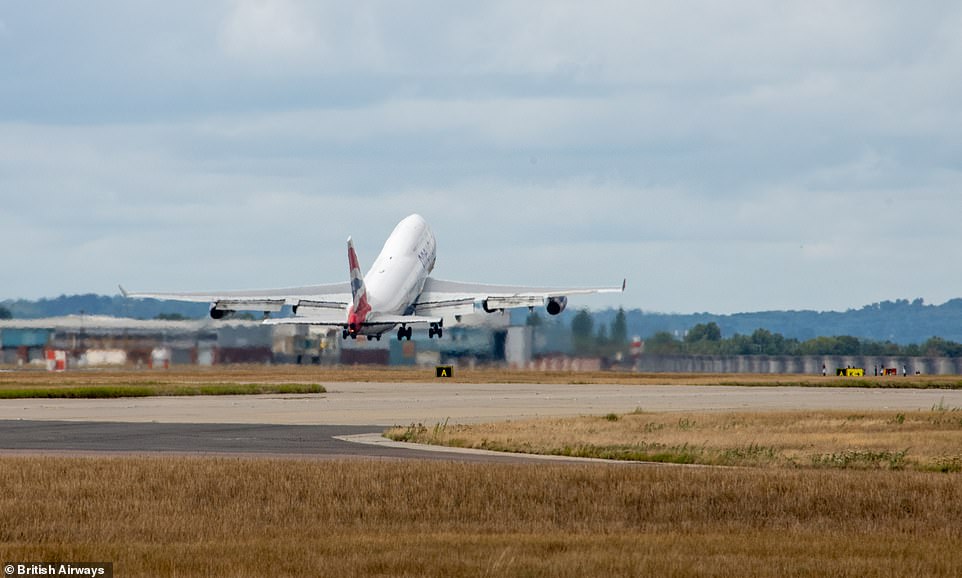 The retiring aircraft gets airborne. It first entered service in 1994 and flew its last passenger service in April

Al Bridger, British Airways’ director of flight operations, said: ‘All of us at British Airways and so many of our customers will have fond memories and special moments from our travels on the iconic jumbo jet.

‘As a pilot who was lucky enough to fly the aircraft, the sheer scale of it was unforgettable. You literally looked down on other aircraft.

‘It changed aviation forever when it arrived in the skies and I know I speak for our customers and the global aviation community when I say, despite rightly moving to more sustainable ways of flying, we will still miss the 747 dearly.’ 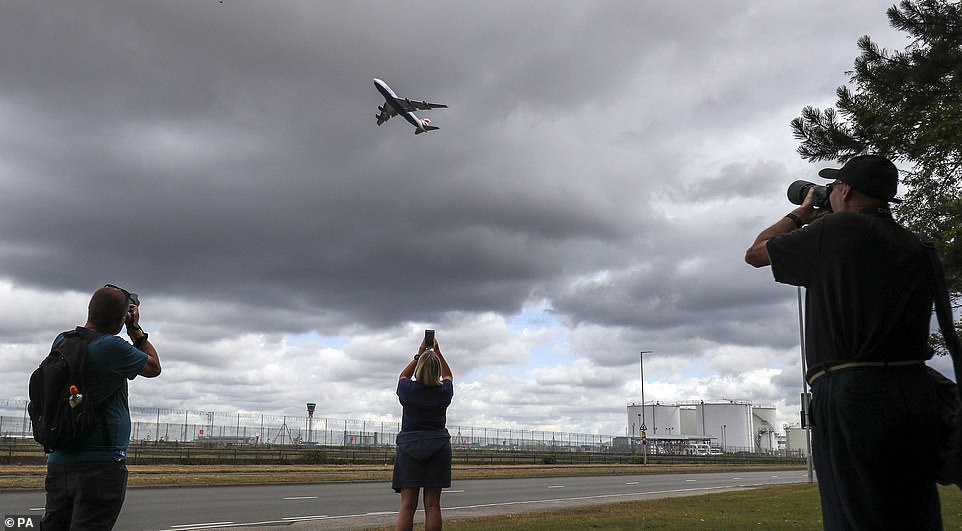 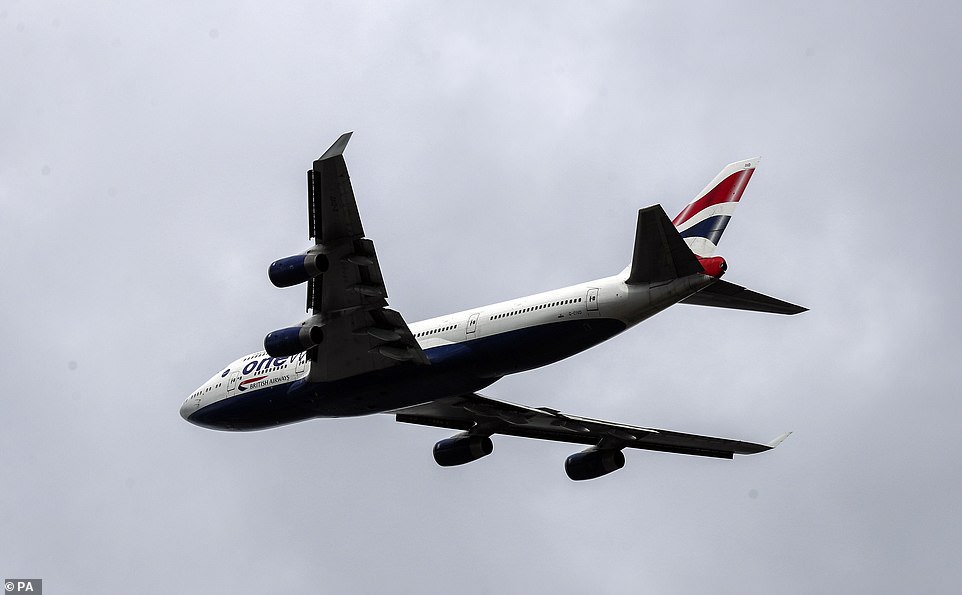 BA estimates that the aircraft retiring, pictured wheels-up over Heathrow today, has flown for 115,276 hours on 13,364 flights and over 50 million miles

The 747, with its humped fuselage and four engines, is the world’s most easily recognised jetliner and it democratised global air travel in the 1970s. At one point BA operated 57 of the aircraft, with the jumbo jet’s first flight to New York in 1971.

But the Boeing model fell behind modern twin-engine aircraft and now trails newer planes in fuel efficiency, making it expensive to run, particularly during the current travel slump.

BA said it had invested heavily in new, modern long-haul aircraft including six A350s and 32 787s, which are around 25 per cent more fuel-efficient than the 747.

Meanwhile, BA, owned by IAG, has said it is fighting for its survival due to coronavirus and needs to axe as many as 12,000 staff.

Restrictions on travel between the UK and popular destinations in the United States and India have wiped out BA’s most lucrative international routes, while demand for European flights has also waned as a result of British quarantine rules.