Britain’s woodlands face being overrun with deer because the market for wild venison has collapsed.

The deer population is now estimated at two million – its highest for 1,000 years – but cheaper meat from abroad, coupled with falling demand during the Covid lockdown, means there is no incentive for the traditional cull.

Experts say the excess deer numbers will result in trees and native plants being destroyed, especially in areas such as Thetford Forest, Norfolk, and the New Forest in Hampshire.

Demand for wild venison had already been lowered at the beginning of 2020 because of cheaper, farmed imports from New Zealand, Spain and Portugal. But the lockdown of restaurants, hotels and cruise ships made matters worse, essentially closing the market. Now the UK has a glut of deer and no incentive for the usual cull. The animals started venturing into residential areas as traffic reduced during the lockdown, pictured here in Romford, England.

They have called for a campaign to promote the eating of venison, saying it could be a regular alternative to beef or chicken.

Each year some 600,000 deer need to be killed to control the UK population, but the amount stalkers are paid for carcasses has fallen from about £2.50 to £1 per kilo.

Demand had already dropped at the start of the year because of cheaper, farmed imports from New Zealand, Spain and Portugal.

Then the lockdown of restaurants, hotels and cruise ships effectively closed the market, and game dealers still have enough in cold storage to last until next year. 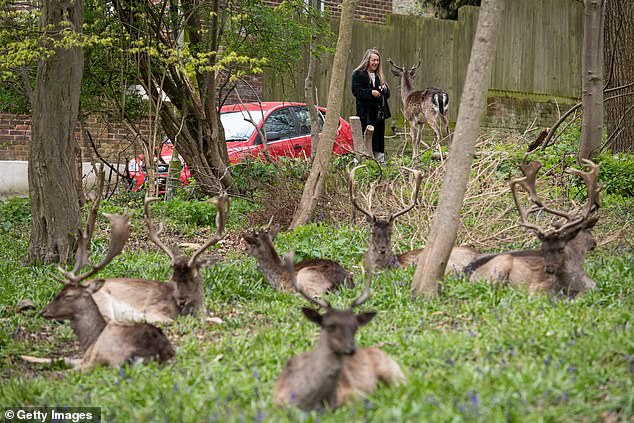 Experts say the environment in areas such as Thetford Forest, Norfolk, and the New Forest in Hampshire are particularly at risk because of the rising deer population, and have called for a campaign to promote eating more venison. Here deer are pictured in Dagnam Park as they rest and graze in a patch of woodland outside homes on a housing estate in Harold Hill, near Romford (file photo).

Martin Edwards, head of deer management at the British Association of Shooting and Conservation (BASC), said: ‘There is less incentive to kill deer because the only revenue is from the sale of the carcass and at the moment there’s no value in it.’

No one would shoot a deer just to leave it to rot. But without culling, there is going to be an adverse impact on woodlands across the country.’

The Government has a strategy to plant 75,000 trees a year but it is feared landowners will resist if their young saplings are destroyed by deer.

The Forestry Commission is so concerned it has formed a new Wild Venison Working Group seeking new ways to boost consumer demand for the healthy meat. 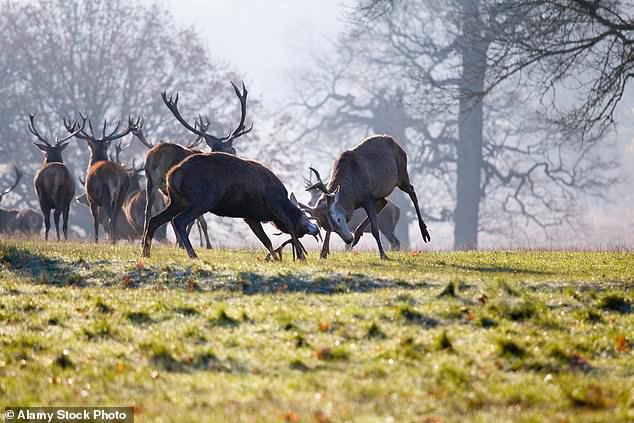 Some 600,000 deer need to be killed each year to control the UK’s population, which now stands at two million. But the amount stalkers are paid for carcasses has fallen from about £2.50 to £1 per kilo and people see it as a ‘niche meat for special occasions’, according to Game Dealers Association chairman Stephen Crouch. Here, deer fight on sunny winter day in Richmond Park, London, United Kingdom (file photo).

‘Restaurants at present are unwilling to gamble on buying venison and risk being stuck with it, so are choosing popular meats like beef and chicken that they know their customers will eat,’ he said.

‘We must do more to change people’s perception of wild venison and show it can be used in everyday meals. It is ideal for barbecues but we have not promoted it like that.

‘It’s seen by many as a niche meat for special occasions.’ 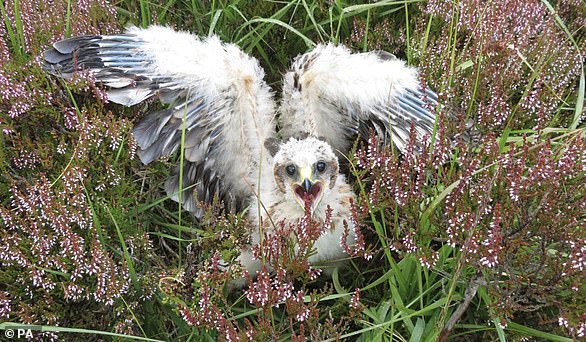 One of Britain’s rarest birds of prey, the hen harrier, has this year had its best breeding season for two decades, according to new figures from Natural England.

A total of 60 chicks were fledged from 19 nests across Northumberland, the Yorkshire Dales, Cumbria and Lancashire in early summer.

The success was put down to high numbers of voles – a key food source – good weather and strong partnership between conservationist bodies and landowners.

One of our most distinctive birds, the hen harrier, left, has an owl-like face. Tony Juniper, chairman of Natural England, said: ‘Despite the great progress there is no cause for complacency. They remain critically endangered in England.’

Environment Secretary George Eustice has been asked by the experts to encourage supermarkets to stock more British venison and consider helping to fund an advertising campaign.

A spokesman for the Department for Environment, Food and Rural Affairs (Defra) said: ‘It is important to manage the deer to ensure a healthy and sustainable population in balance with the environment. We are working closely with the industry to identify where further support is needed.

‘British food and drink is some of the finest in the world and leaving the EU means we can take advantage of the growing global demand for great British produce, such as wild venison.’