Britons have been warned to wrap up warm for the beer gardens with rain and strong winds dampening the Bank Holiday spirits this weekend.

A weather warning is in place for Monday with gusts of up to 60mph forecast in Wales and the south coast of England, while showers will batter the umbrellas.

Temperatures will remain low for this time of year with highs of 14 degrees which drop overnight to -1C and some will see patches of sun amid the wet and windy weather.

On Saturday, intermittent rain and sun will sweep the country and could hinder any Bank Holiday plans.

Sunday will see a chilly and frosty start to the day before showers break out again before Monday’s gusts kick in.

Thick cloud will build in from the west and heavy and persistent rain will push eastwards throughout the day. 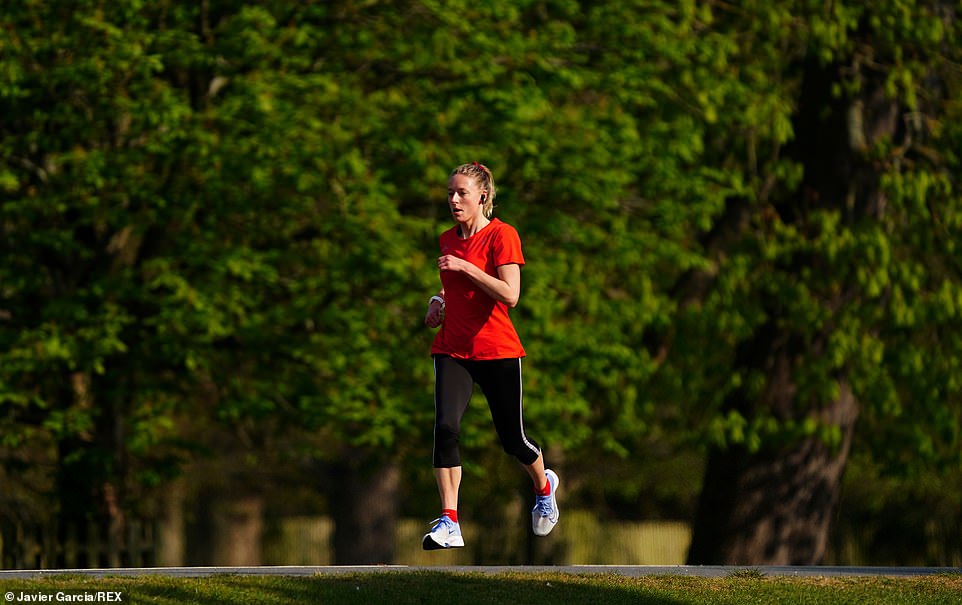 A runner makes the most of the Saturday morning sun in Bushy Park, London. Britons have been warned to wrap up warm for the beer gardens with rain and strong winds dampening the Bank Holiday spirits this weekend 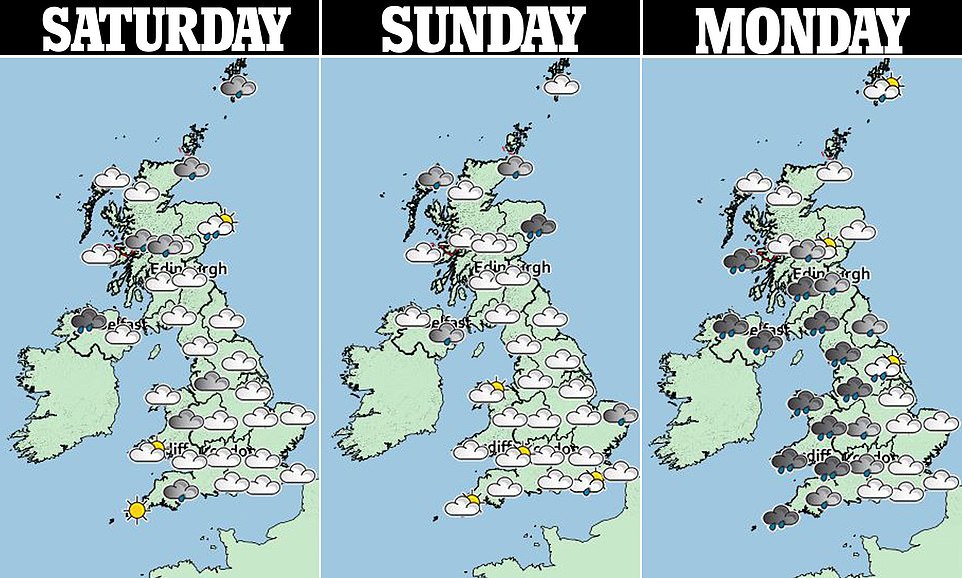 Millions are set to take advantage of the first bank holiday of the year with eased lockdown rules. It will also be the first weekend when travel to Wales and Scotland for leisure can go ahead, with many staycations expected.

The RAC said motorists were planning nearly 15million trips between yesterday and Monday, potentially bringing gridlock to roads. This would be the highest number of car trips for the early May bank holiday since 2016.

Met Office meteorologist Craig Snell told MailOnline: ‘Today, it’s staying the same as the rest of April, a fairly cool day for the time of year, a mixture of sun and scattered showers.

‘Temperatures at best are 14 degrees in the south, below par for this time of year. It should be nearer to 16 or 17 by now so we are a little bit down on what it should be.

‘Tomorrow, showers should fade away overnight but there will be frost in some places, especially in the countryside. Chilly start to the day, a rinse and repeat of Saturday’s weather.

‘Monday doesn’t get much better with rain coming through from the Atlantic. By the afternoon, most of us will have a pretty miserable day. 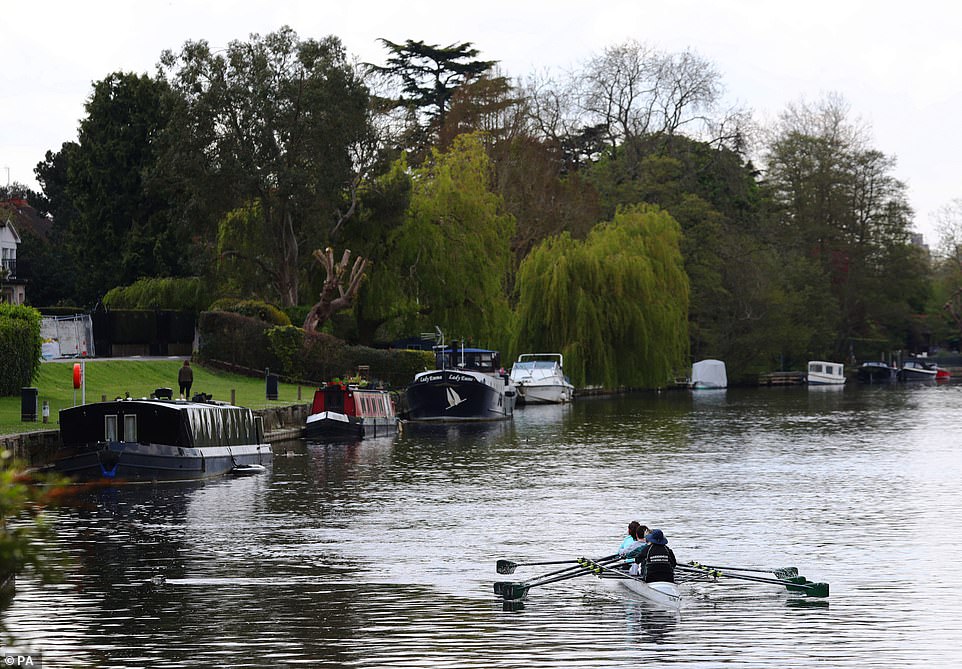 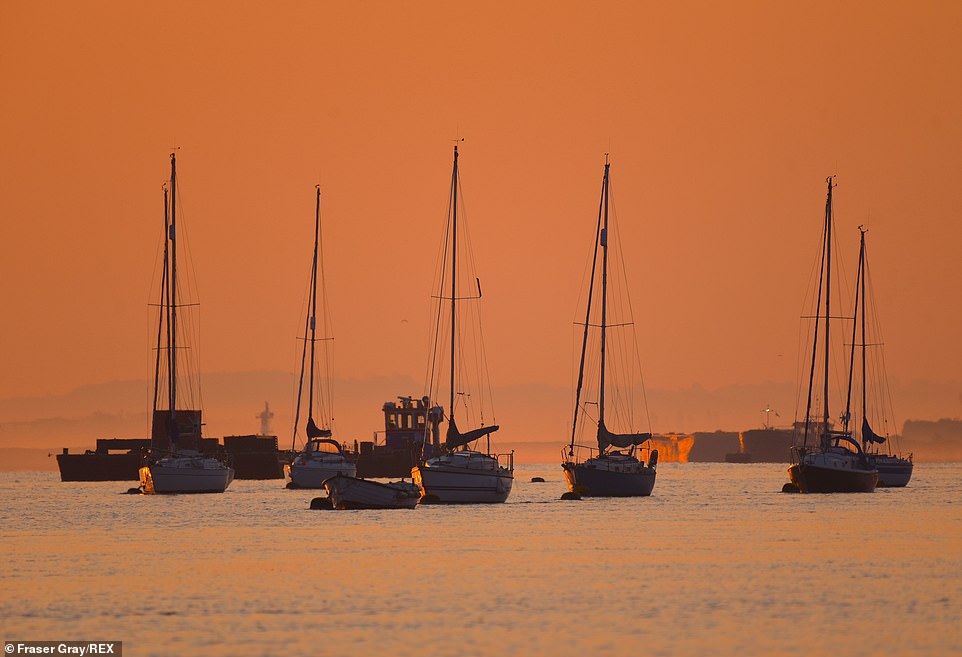 ‘We have enforced a weather warning, the first for a while, in parts of Wales and the south coast of England with gusts reaching 40 to 50 mph, even up to 60 in some places.

‘There could be travel delays and temporary structures need to be tied down because the winds will be strong enough to move them. Not the best of Bank Holiday Mondays.

‘Farmers might welcome the rain because it has been a very dry April but anyone trying to make plans might not.’

An RAC survey asking more than 1,000 drivers about their bank holiday plans suggests today will be the busiest with around 2.63million journeys planned.

A further 1.64million are due tomorrow and nearly 2million on Monday. And 6.2million trips are to be made by those unsure of when to travel. Around 2.3million car trips were expected to be made yesterday. 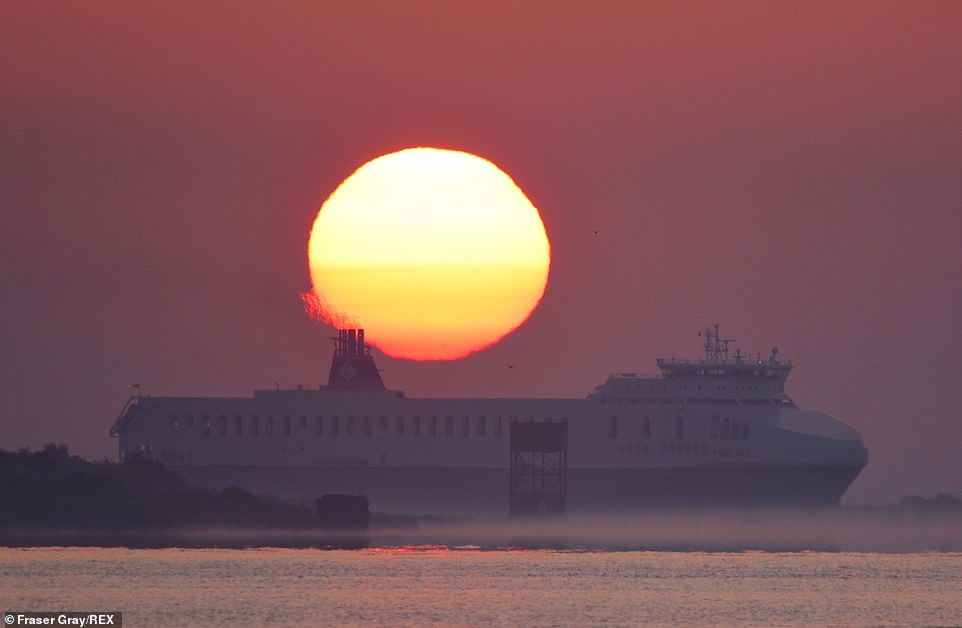 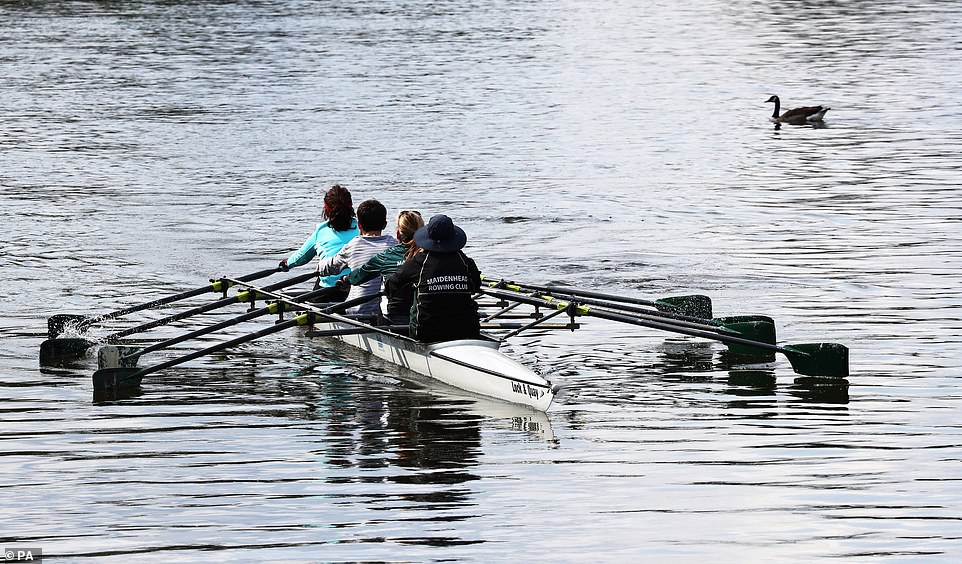 A weather warning is in place for Monday with gusts of up to 60mph forecast in Wales and the south coast of England, while showers will batter the umbrellas. Pictured: rowers on the Thames in Maidenhead

The busiest roads are expected to be holiday routes including the M5 from the Midlands and Bristol towards Devon and Cornwall, and the M6 to Cumbria.

The RAC’s Rod Dennis said: ‘After what was one of the quietest Easters on the roads in years, our figures suggest the easing of Covid restrictions has made a dramatic difference with millions more drivers planning to hit the roads.

‘It remains to be seen what effect the weather will have as meeting up in soggy parks and gardens may not prove quite so appealing. And if it’s too cold for a trip to the beach, then there could be a big uplift in visits to shops, cafes and restaurants with covered outdoor areas.’

Jack Cousens, the AA’s head of roads policy, said: ‘The May Day weekend will be the first test of post-lockdown leisure travel with Scotland and Wales not only unlocking at a faster speed than England, but allowing travel between other parts of the UK.’

Meanwhile Network Rail plans to carry out a series of big engineering projects, with one rail firm warning train users not to travel during the three-day weekend.

Until Monday the West Coast main line to and from London Euston is closed. An Avanti West Coast spokesman said: ‘We strongly advise you to travel either side of the bank holiday weekend.’

Millions of Britons are set to take advantage of the first Bank Holiday this year for which lockdown restrictions will be eased.

Many intend to embark on shopping and day trips or mini breaks following the re-opening of non-essential shops, zoos, theme parks and stays in self-contained accommodation.

It will also be the first weekend when cross-border travel into Wales and Scotland for leisure trips can go ahead, with many staycationers expected to take advantage.

Authorities in Snowdonia national park have asked visitors to ‘be kind’ if they choose to visit.

‘Do not park on roadsides or across entrances, it is dangerous and can cause problems for our farmers, communities and emergency services,’ they said in a statement.