Dreaming of a summer spent away from the hustle and bustle of city life? Does a remote staycation in a shepherd’s hut on a Welsh hillside sound perfect, or would you rather hide away in a cottage only accessible by boat?

There is plenty of scope for a secluded stay across the UK – and they’re now easy to find, thanks to a new ‘off-grid’ map created by The Shackleton Whisky company, which focusses on adventures that will give you a chance to take time away from your screen.

These unique homes all receive poor to zero 3G, 4G or 5G signal within the surrounding area, and although this may vary by providers, it is appealing for anyone who fancies a serious digital detox.

According to a recent study, Brits spent over eight hours of their day glued to screens during lockdown – and, now that travel restrictions are easing, 34 per cent are looking for remote adventures with no interruptions from technology.

These secluded retreats offer a chance to swap months of video calls, social media and emails for uninterrupted, signal-free getaways at forest cabins, tree-house retreats, and accommodation only accessible by boat or long hikes.

Here FEMAIL reveals some of the most unique places around the UK for a remote staycation.

This little home requires a two-hour walk (or a 30 minute kayak trip) to reach it. With no electricity or water and just a few creature comforts – it’s an adventure waiting to happen.

Peanmeanach Bothy was built circa 1905, originally as the schoolmistress’ house when the village was a thriving township with a population of around 50.

The bothy, which has no electricity or running water, costs £50 per night Friday to Sunday and £40 Monday to Thursday nights, and boasts no nearby neighbours for a secluded stay.

It also has a wood-burning stove, magnificent views across the bay during the day, and if skies are cloudless, fabulous views of the stars in the evening. 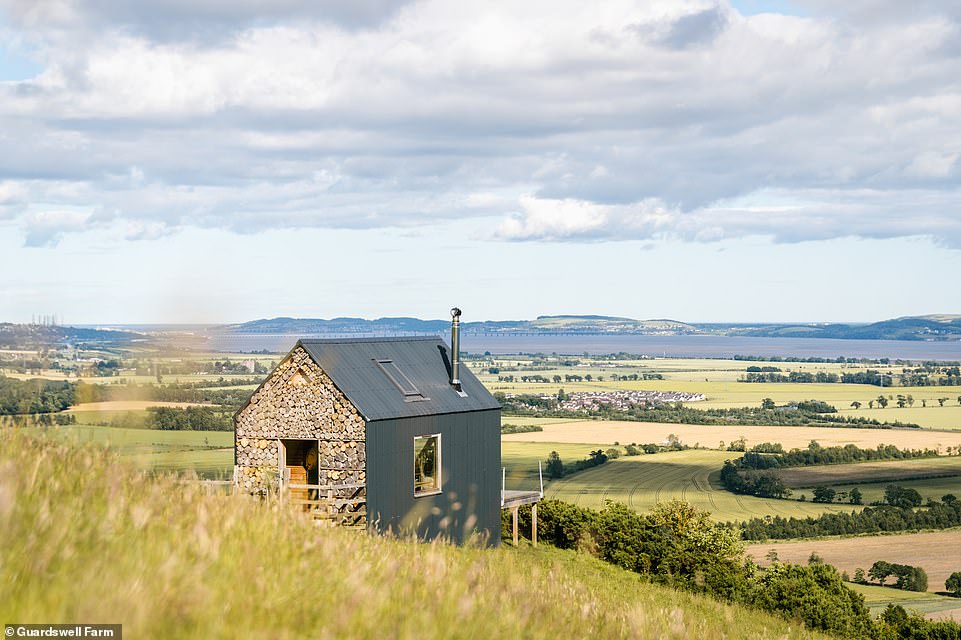 This hillside dwelling is an off-grid haven for those who love stargazing, peaceful surroundings, and a chance to watch the world go by.

Guardswell Farm is a 150-acre grassland farm situated on a south facing hill with panoramic views stretching from Dundee to Fife along the River Tay.

The secret getaway, which sleeps up to four people and costs £100 per night, gives people a chance to immerse themselves in simple pleasures like running a micro-farm and leaving their digital dependence behind. 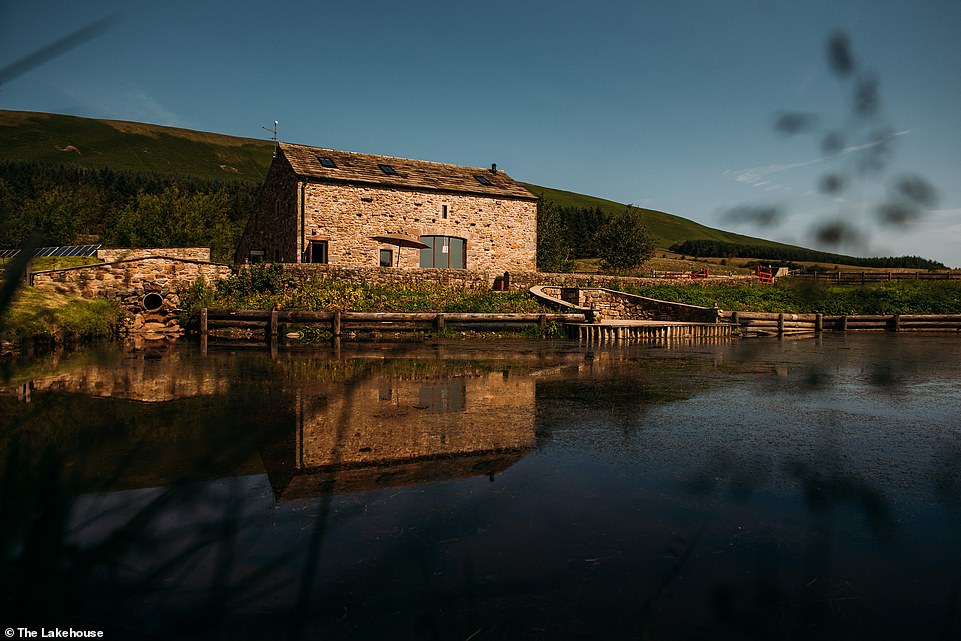 The Lakehouse is an off grid, lovingly restored barn conversion, set in three acres of land, features its own private lake and woodland in the heart of Lancashire.

Powered by the wind and sun, with water alkalised and filtered from the on-site spring on Burn Fell, this really is a place to reconnect with nature and those around you.

The home, large enough for seven guests, has a private spa for those who want to unwind after a days adventures. Prices start from £400 per night. 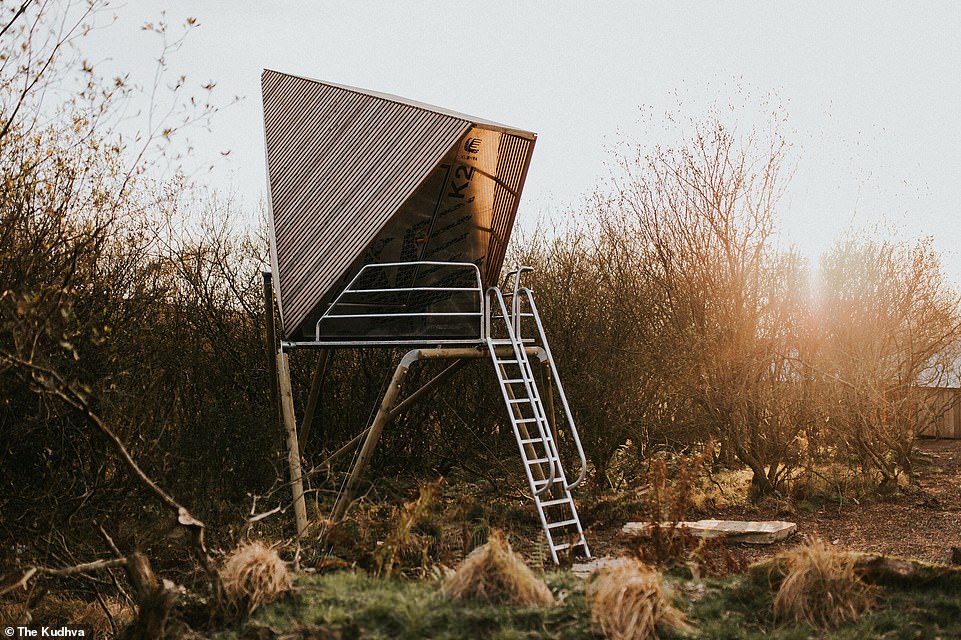 The Kudhva, which sleeps two, has been designed to offer shelter in a way which leaves you feeling calm and cared for 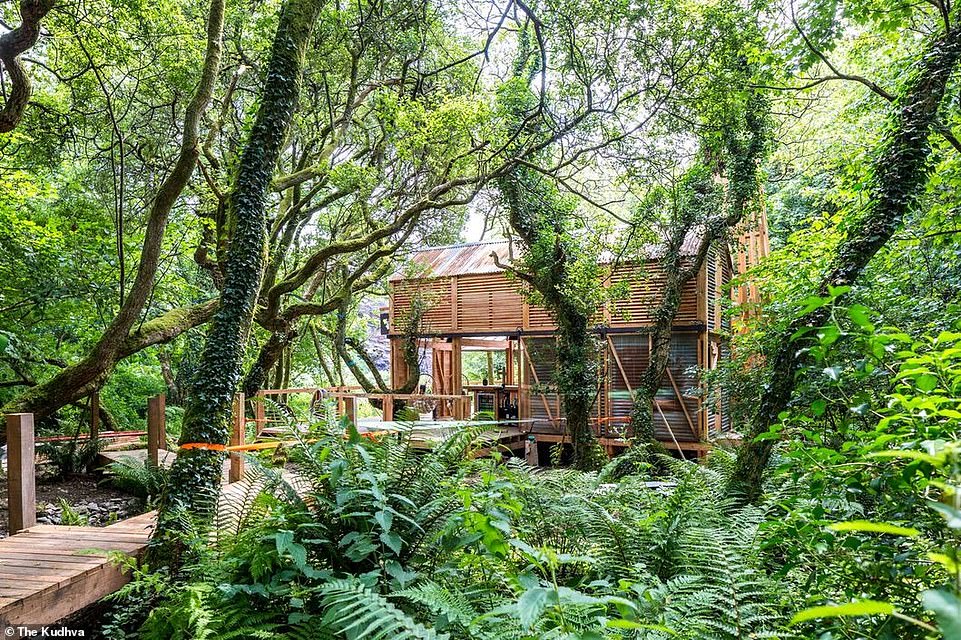 There are four Kudhva on site, completely off-grid and designed to offer temporary shelter in a way which leaves you feeling calm and cared for, just by the structure itself.

They sleep two in a mezzanine bed, looking out the floor-to-ceiling windows at the views beyond, with prices starting at £125 per night.

The Danish Cabin, which sleeps six, sits above a 40ft waterfall in a secluded deciduous woodland with a river running underneath its private deck.

Kudhva, the Cornish word for ‘hideout’, describes the area perfectly, as it is set in a 45 acre abandoned quarry, overlooking the sea. 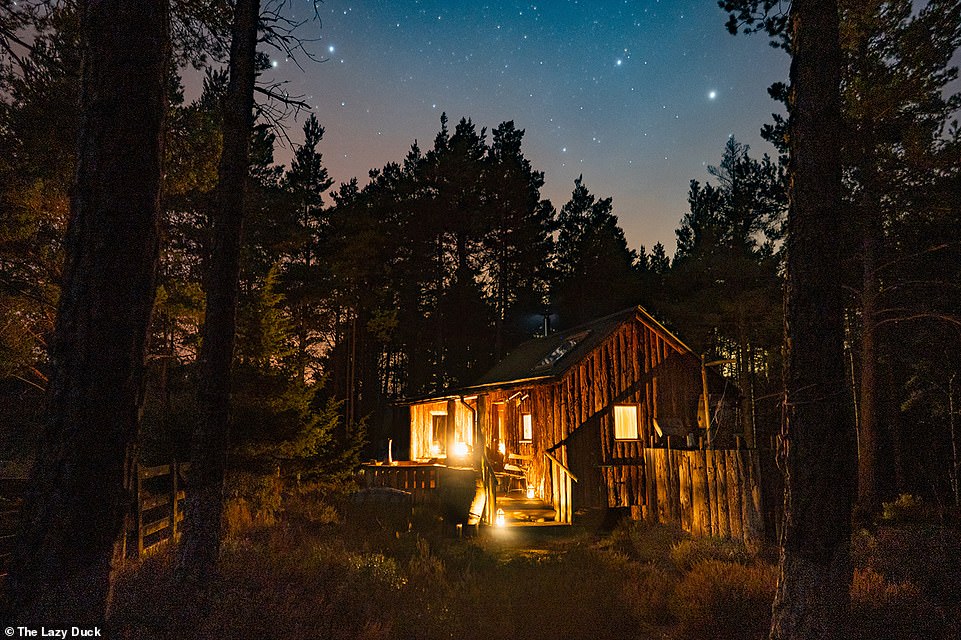 The Lazy Duck is a 25 year old organically grown retreat that has ecology and wellbeing at its core as it sits nestled in secluded woodland.

Sitting on the waterside with only rare breeds of ducks for neighbours, the home features a wood burning stove and a stargazing window.

The message behind the cabin is ‘slow living’ and this hidden gem features a wood fired hot tub and sauna 20 minutes away from the popular town of Aviemore.

Adventurous days are followed by relaxing evenings, where yoga and massage are offered in the well being studio to really unwind.

Cabin on the Lake – Powys, Wales 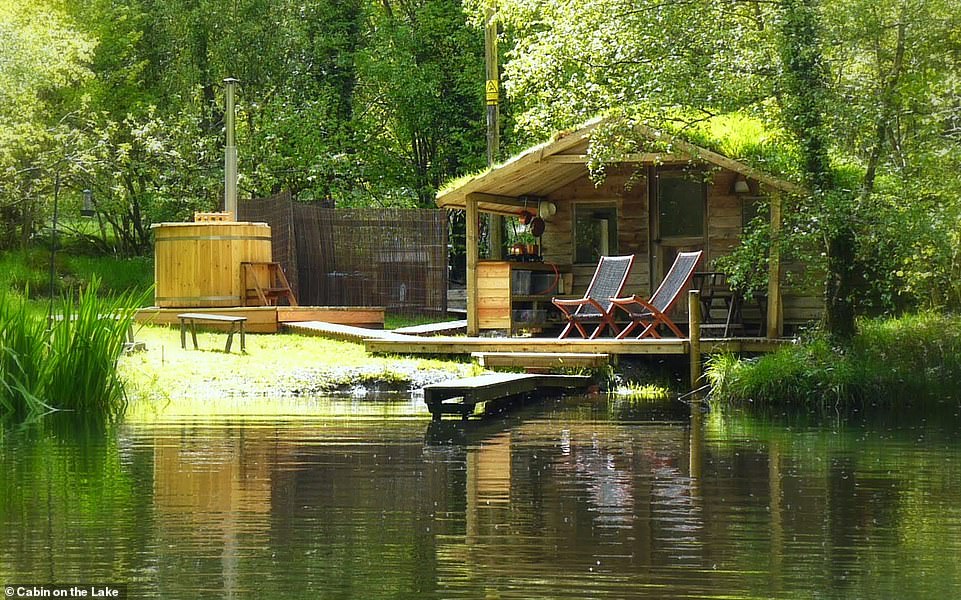 This cabin sits on the banks of a small lake allowing guests to sit by the water and watch the wildlife pass by as they switch off under the stars.

Described as ‘wild and wonderful in the heart of Wales’, guests can relax in the hot tub or take a trip in the canoe and paddle around the island.

Spending three nights at the cabin, arriving on Friday and departing on Monday, costs £465, while spending Monday to Friday there costs the same amount. 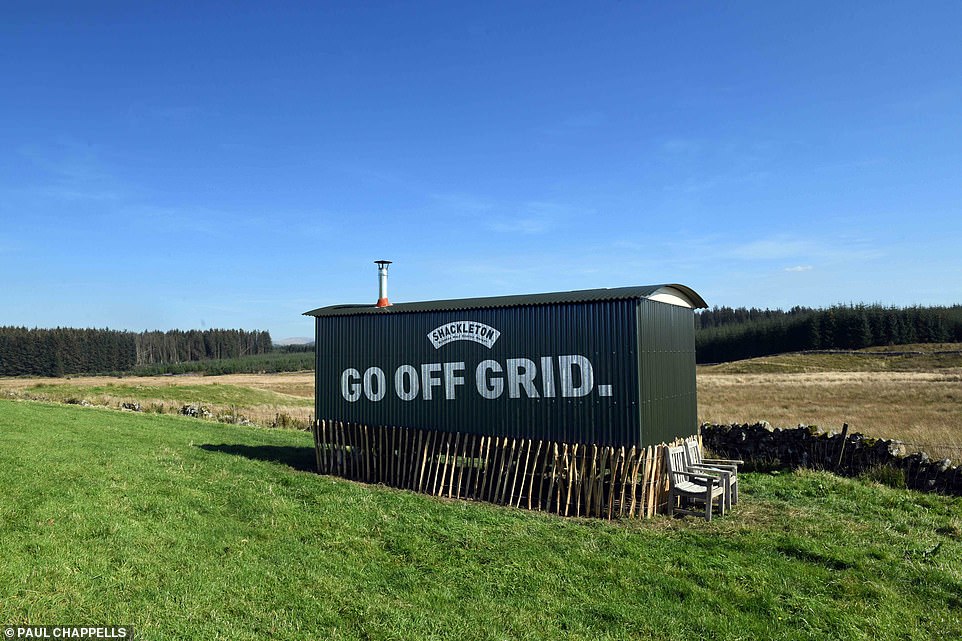 Creeside Farm and its Shephard’s Hut are set in over 200 acres of land situated on the edge of Galloway Forest Park, part of an officially designated UNESCO Biosphere, making it an ideal location to get offline.

The hut, which sleeps two guests, is situated on a working farm, boasts uninterrupted views of the River Cree and the Galloway Hills in the distance.

Taking things back to basics, the hut has no Wi-Fi or phone signal, but it does offer books, cards, board games and a radio to keep you entertained.

Costing £65 per night, the hut has a wood burner for a cosy feel, and although there is a socket to charge a phone it has no mains electricity. 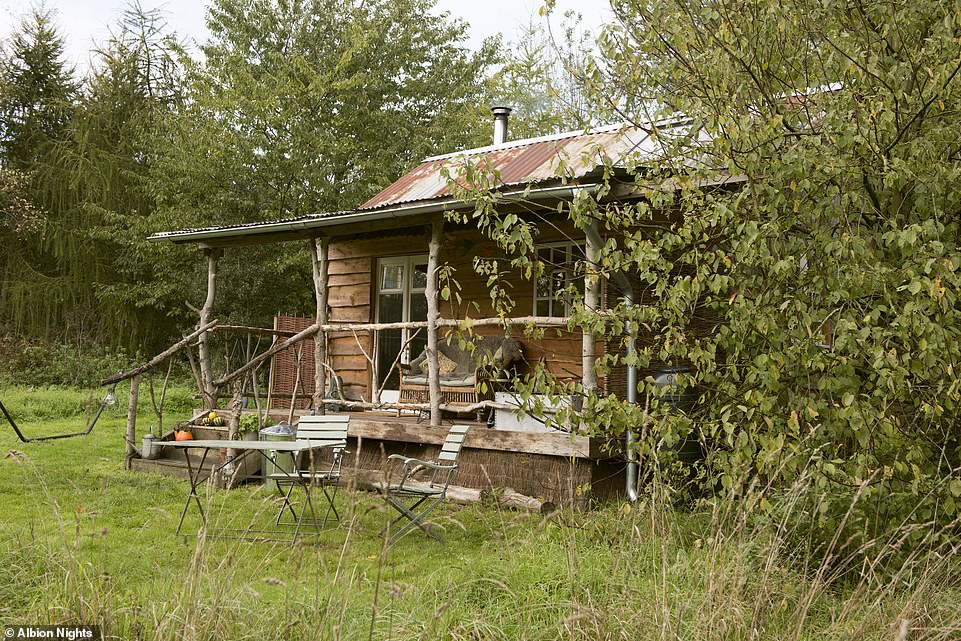 Albion Nights offers a bespoke, hand-crafted cabin in a six acre wildflower meadow with a veranda for evening stargazing

Albion Nights offers a bespoke, hand-crafted, off-grid cabin set in a six acre wildflower meadow. It’s cosy and welcoming, with its own simple kitchen and en suite, so you can be completely self-sufficient.

Located in the Waveney Valley on the Norfolk/Suffolk borders, it provides a secluded adult-only eco-retreat for a simple life getaway.

The star attraction though is the private outdoor bath, on the cabin veranda, where you can while away your evening stargazing.

One guest described the cabin, which sleeps two people, as a ‘secret paradise’. Prices start from £100 per night. 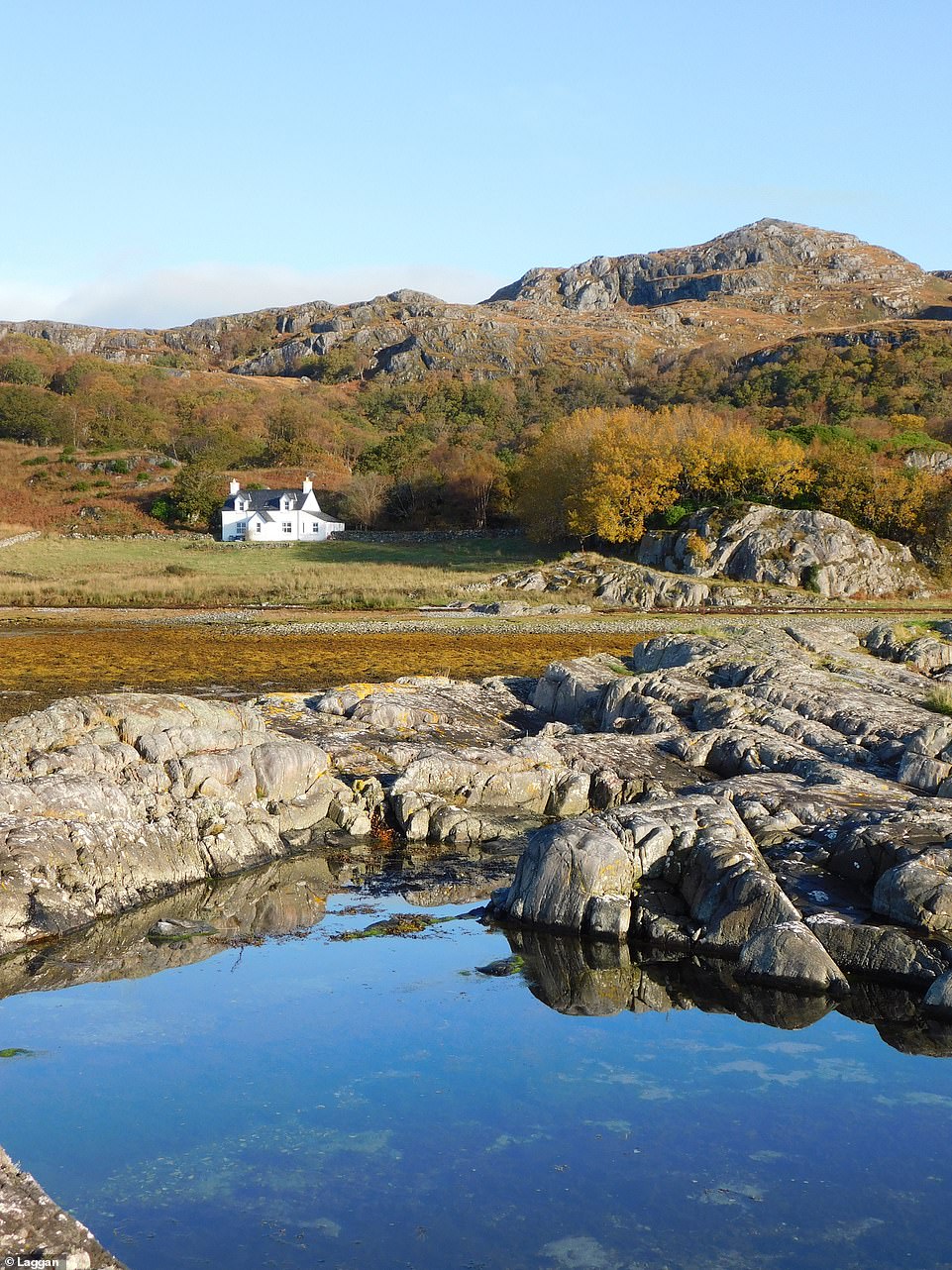 This place is seriously off-grid – think paraffin lamps, gas cooker, and fridge. It’s only readily accessible by boat and has no electricity.

Use of a boat and outboard engine are included in the rental price, so you can explore the coastline on foot and by sea.

The nearest road is a three hour walk or a 10 minute boat trip away, so guests can have real peace and tranquility undisturbed from the outside world.

Laggan sleeps five and has everything needed for those who love wildlife, the outdoors or a day by the beach thanks to its stunning sea views to the Hebrides and small isles.

Two wood-burning stoves keep it feeling warm and home. Spending a week in the house to roam the surrounding 3,500 acres will set you back £950. 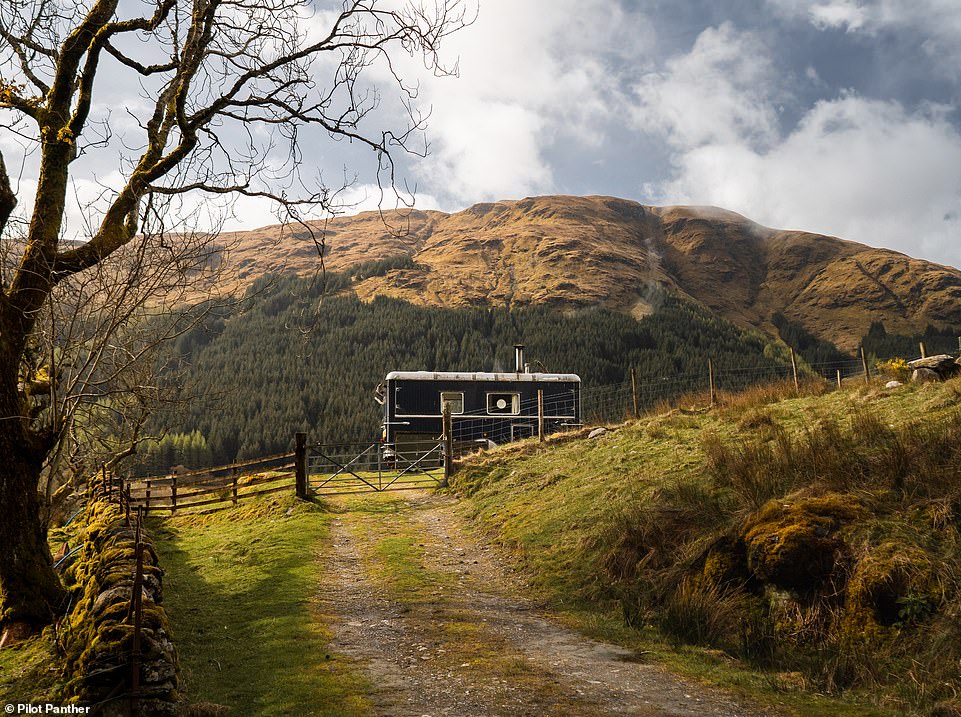 The Pilot Panther is a restored 1950’s showman’s wagon with an authentic retro vibe and wood-burner which makes for a rustic getaway with ever-changing stunning views over Loch Voil.

The views from every window are of the spectacular loch which seems to change with the weather and provide a new sight every day.

Showers and toilet facilities are a minute’s walk away from the wagon, which can sleep up to four people and starts at £145 per night.

The map was launched by The Shackleton Whisky, which also built a pop-up retreat in a secret location, in Scotland, for groups of up to six over the May bank holiday weekend.

Actor Richard Rankin was the first guest at the secret location as he took a break from filming season 6 of popular TV series Outlander. He said: ‘My screen time went through the roof over the last year. Everything had to be done on video calls – from work to seeing family and friends.

‘But now that travel restrictions are lifting, the opportunity to get offline is ideal – no signal, no Wi-Fi; just great chat and great whisky.

‘For me, The Shackleton Whisky’s off-grid getaway was the perfect balance of gritty adventure, relaxation, and the chance to explore the great outdoors and snap some of my own photos.’