Telling patients with coughs to stay away from NHS facilities during Covid led to a ‘devastating’ reverse in progress fighting the disease, MPs were told today.

Experts lined up to give evidence about how cancer treatment suffered during the pandemic to the Health and Social Care Committee.

Politicians were told how patients with lung cancer, one of the UK’s biggest killers, was likely missed and left to die without a diagnoses.

They claimed it mirrored the situation in the late 1990s before medical breakthroughs, where people with lung cancer were being spotted when it was too late. 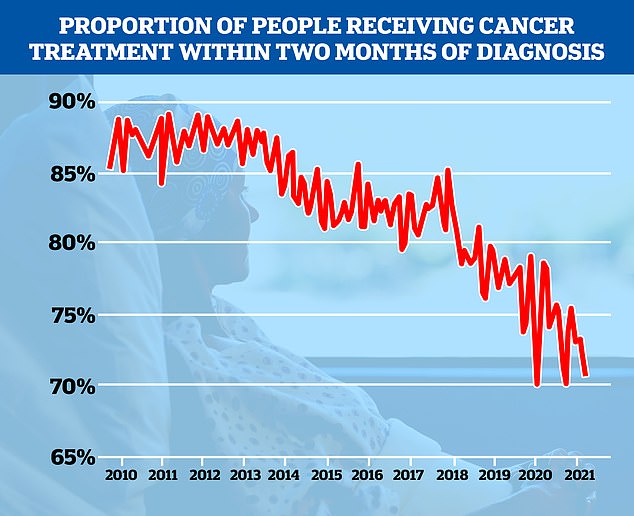 Cancer treatment times were already lagging before the pandemic but fell off a cliff when Covid disruption ripped through the health service, and are still yet to recover

‘The Covid pandemic has shown us what happens when we turn off the access to early diagnosis and scanning,’ he said.

Early diagnosis is a key factor for surviving lung cancer, which has five-year survival rate of 57 per cent if caught early but this drops to 3 per cent if found late.

Professor Baldwin likened the situation to working 25 years ago, in terms of seeing patients whose cancer had only been spotted at a late stage.

‘It was like working 20 to 25 years ago…late stage disease, horrible presentations, all sorts of things that we’d actually forgotten about because we’d made so much progress on this early diagnoses pathway,’ he said. 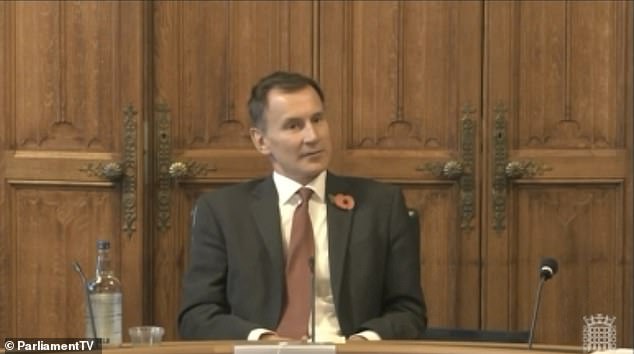 Some MPs said the fact that lung cancer care standards had reversed to such an extent during the pandemic was ‘socking’. (Pictured chair of the Health and Social Care Committee, and former health secretary, Jeremy Hunt)

WHAT IS LUNG CANCER?

Lung cancer is one of the most common and serious types of cancer.

Around 47,000 people are diagnosed with the condition every year in the UK.

There are usually no signs or symptoms in the early stages of lung cancer, but many people with the condition eventually develop symptoms including:

– an ache or pain when breathing or coughing

You should see a GP if you have these symptoms.

There are two main forms of primary lung cancer.

These are classified by the type of cells in which the cancer starts growing.

– Non-small-cell lung cancer. The most common form, accounting for more than 87 per cent of cases.

– The type of lung cancer you have determines which treatments are recommended.

More than four out of 10 people diagnosed with lung cancer in the UK are aged 75 and older.

Although people who have never smoked can develop lung cancer, smoking is the most common cause (accounting for about 72 per cent of cases).

This is because smoking involves regularly inhaling a number of different toxic substances.

Treatment depends on the type of mutation the cancer has, how far it’s spread and how good your general health is.

If the condition is diagnosed early and the cancerous cells are confined to a small area, surgery to remove the affected area of lung may be recommended.

If surgery is unsuitable due to your general health, radiotherapy to destroy the cancerous cells may be recommended instead.

If the cancer has spread too far for surgery or radiotherapy to be effective, chemotherapy is usually used.

There are also a number of medicines known as targeted therapies.

They target a specific change in or around the cancer cells that is helping them to grow.

Targeted therapies cannot cure lung cancer but they can slow its spread.

‘It’s been devastating, to see all of the work we’ve done over the last few years been undone.’

He added that the crisis was possible to ‘fix’, saying: ‘We cannot let this pass without something positive coming out of this.’

Professor Baldwin said patients needed better access to CT scans through diagnostic centres, saying these scans were responsible for detecting the most cancers across the board.

He added that early diagnose initiatives, such as campaigns urging people with symptoms to come forward, need to be taken seriously and linked to the referral process that will get a patient a CT scan and on to the appropriate care.

‘Scan them, that’s the first thing and once they are scanned straight through the pathway as fast as possible,’ he said.

Lung cancer is the third most common cancer in the UK, with almost 50,000 people diagnosed every year — the equivalent of 130 every day.

Cancer screening, referrals and treatment services were all disrupted by the Covid pandemic as the NHS was forced to turn over wards to treat virus patients and specialist staff were drafted in to help.

Over the course of the pandemic tens of thousands fewer people with suspected cancers were referred to a specialist than expected, with the number of chemotherapy and radiotherapy treatments also radically reduced.

At the event today, MPs asked witnesses from the NHS and charitable sector why there was so much variation in the quality and speed of cancer care in England.

They heard how there was ‘unacceptable variation’ in what kind of treatment cancer sufferers were offered across England.

Ms Jewell said there was a 40 to 65 per cent difference  for pancreatic cancer patients being offered chemotherapy after surgery which can reduce the chance of the cancer returning, depending what area of England they lived in.

She also highlighted the inconsistency in enzyme replacement therapy for pancreatic cancer suffers, a treatment designed to keep them well enough for further care.

‘Only 50 per cent of patients receive enzyme replacement therapy when that should really be close to 100 per cent,’ she said.

MPs also heard from 34-year-old mother Katy Hall, who detailed her cancer battle to the committee.

Ms Hall’s cancer treatment was disrupted by the pandemic with a critical scan into what doctors thought was a benign growth was delayed by three months.

‘I was called into the hospital and the first words from the doctor were “It’s not what we thought it was”, and it was at that point I was diagnosed with cancer.

‘My little boy is now only two, and ultimately my life goal is to see him start school.’

Asked by MPs what her message to Government and the NHS was, Ms Hall urged those responsible for care to stop treating cancer as a ‘one size fits all’.

‘Because I wasn’t male and over a certain age…the right scans and the right tests weren’t done in the beginning when my tumor was found,’ she said.

‘That could be the difference between someone living to see their little boy or children start school.’

Kidney cancer is about twice more common in mean and is women with majority of cases occurring in people aged in their 80s.

There are about 13,300 new kidney cancer diagnoses in the UK every year, about 36 a day.

The Health and Social Care Committee is planning to report its findings about cancer care in England early next year.