The people of Wirral are officially the fattest in Britain with more hospital admissions for obesity-related illnesses than anywhere else in the country.

Hot on their heels are those who live in Wigan, York, Stoke-on-Trent and Nottingham.

However, Wokingham and West Berkshire both recorded admission rates below 500 per 100,000 population, according to NHS figures for England (2018/19).

In London, Southwark had the highest number of admissions (2,912), while the lowest in the capital was recorded for Richmond upon Thames, with 730 cases.

With Britain in the grip of a second wave of coronavirus, the issue of obesity is of more concern than ever.

Overweight people are more than three times as likely to die of Covid-19 than those of a healthy weight, a Public Health England report revealed in July.

SCROLL DOWN TO SEE HOW YOUR REGION FARED 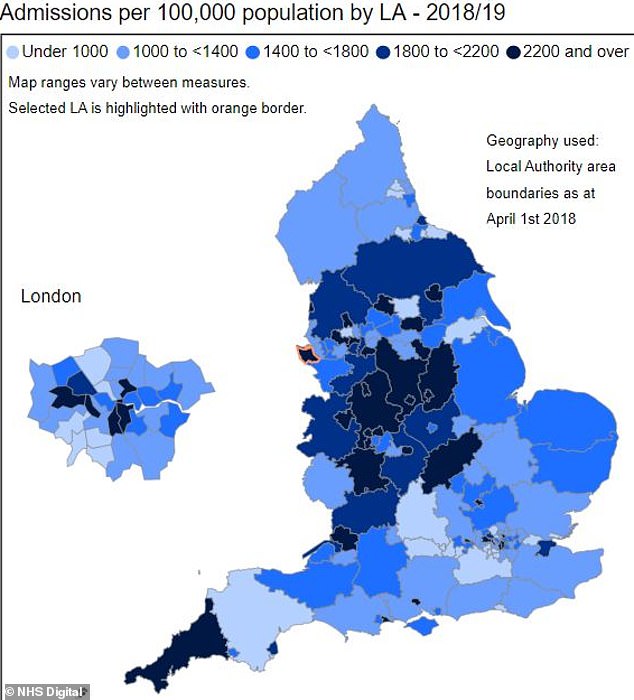 There were 3,804 hospital admissions where obesity was a factor for inhabitants of the Wirral, a metropolitan borough of Merseyside, in north-west England

The figures were also very high for York. With Britain in the grip of a second wave of coronavirus, the issue of obesity is of more concern than ever

Above, the data for Wigan. Admission rates overall for the country ranged from 413 to 3,804 per 100,000 population, with the highest admission rate over nine times greater than the lowest rate

Stoke-on-Trent did also not fare well – with admission numbers standing at 3,154

People who have extra weight, defined as a body mass index of over 25, are also at higher odds of needing ventilation when ill with Covid-19 by seven-fold.

The report said excess weight does not seem to increase people’s chances of contracting Covid-19, but said excess fat can affect the respiratory system and is likely to affect immune function.

Meanwhile, the 2018/19 obesity-admissions NHS report found that across Britain, around three in every four patients admitted were female (74%).

There were 3,804 hospital admissions where obesity was a factor for inhabitants of the Wirral, a metropolitan borough of Merseyside, in north-west England.

Admission rates overall for the country ranged from 413 to 3,804 per 100,000 population, with the highest admission rate over nine times greater than the lowest rate.

For admissions directly attributable to obesity, the number increases to middle age, peaking at 45 and 54, before declining in older age groups.

Seventy percent of patients were aged between 35 and 64.

NHS figures for England reveal there were 876,000 admissions last year linked to obesity, with women making up two in three patients.

And nearly 700 children required hospital treatment because of their weight – the second highest number on record.

Health officials have warned the crisis is likely to have worsened during the Covid pandemic, with millions of children stuck at home and doing less exercise. 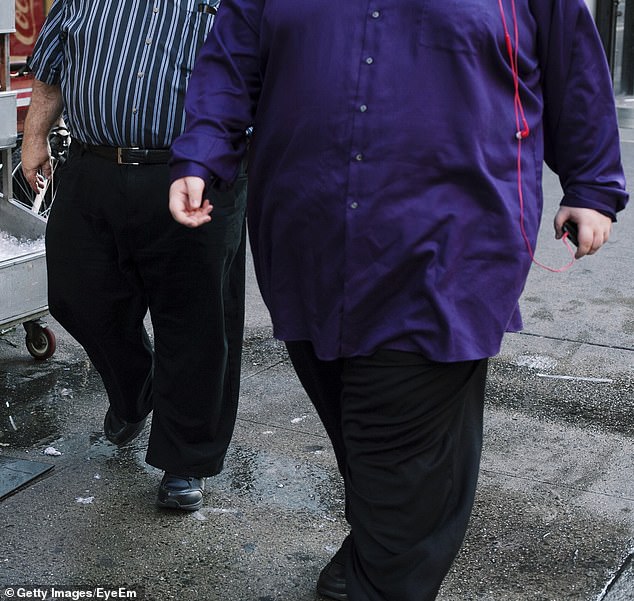 NHS figures for England reveal there were 876,000 admissions last year linked to obesity, with women making up two in three patients. (File image)

Meanwhile, Wokingham and West Berkshire both recorded admission rates below 500 per 100,000 population

An increase in gastric band surgery is one of the reasons behind the rise.

Those from deprived areas were more likely to be admitted to hospital because of obesity, the data suggests.

A third of children and two thirds of adults in Britain are overweight.

Meanwhile, another study has found that obese people may suffer more from Covid-19 because their weight damages their immune system.

The researchers, from the University of Michigan, found that people who are seriously overweight are more likely to suffer from severe coronavirus symptoms.

And this could be because their excess weight means their immune systems are constantly under strain and running at a higher baseline than people of a healthy weight.

High levels of fat and sugar in the blood can trigger swelling inside the blood vessels and organs.

As a result, when someone gets an infection, their already-running immune system is closer to tipping over the edge into over-reaction than a healthy person’s is.

The body’s own overreaction, which can cause sepsis and deadly organ damage, has been seen repeatedly in the sickest patients with Covid-19.

And it could go some way to explaining why overweight people face a higher risk of dying if they catch the illness, which is borne out in official hospital data around the world.

Studies have shown obese people are more likely to suffer serious complications or die from infections, such as the flu.

Doctors say the immune systems of fat people are constantly ramped up as they try to protect and repair the damage inflammation causes to cells.

Using all its energy fending off inflammation means the body’s defence system has few resources left to defend against a new infection like Covid-19.

‘Their fat tissue for example becomes a reservoir for immune cells known as macrophages. While these cells reside in our fat under normal circumstances, in obesity they are at higher frequency and become more troublesome (they start to secrete inflammatory cytokines) and negatively impact on immune and metabolic health.’

Obese people might eat a diet with very little fibre and antioxidants – which keep the immune system healthy – such as fruit and vegetables.

Most patients with a BMI of over 40 suffer from breathing problems that range from simple shortness of breath to a potentially life-threatening condition known as obesity hypoventilation syndrome (OHS).

Public Health England (PHE) has previously suggested that obesity leads to fatty tissue around the upper airway, and a heavy chest can directly reduce lung function.

Excess weight may make it more difficult for the diaphragm and lungs to expand and inhale oxygen. Starved of oxygen, organs will begin to fail.

But other experts have disagreed with this theory, saying severely ill Covid-19 patients end up on ventilators anyway and still end up with worse outcomes.

There are several other factors that may increase an obese person’s chance of falling seriously ill with coronavirus, including a lack of exercise.

Studies have shown that physical activity increases the numbers of certain immune cells that help to bolster immune activity.

Clogged-up arteries also make it hard for blood carrying immune cells to pass through and repair cells around the body.