Britain’s Deputy Chief Medical Officer believes she had coronavirus: Jenny Harries reveals she was ‘knocked out’ during ‘very unpleasant 10 days’

The woman who has fronted the government’s daily briefings on the coronavirus pandemic in the UK today revealed she also battled the virus.

It comes after her boss Professor Chris Whitty self-isolated after suffering ‘mild symptoms’ and both Prime Minister Boris Johnson and Matt Hancock confirmed they had the virus.

Speaking to Lorraine Kelly this morning on Good Morning Britain she said she didn’t have some of the respiratory symptoms.

Dr Harries said she recovered by following the medical advice that has been issued to the whole of the UK.

She added: ‘I’m usually very fit and healthy. I was really very knocked off probably for about a week and very grateful to my children for looking after me.’

Asked after how long she felt well enough to return to work, Dr Harries said: ‘Obviously we absolutely need to follow our own advice and the advice is after seven days, if you no longer have symptoms, apart from potentially a bit of a cough which persists, then you should be fine to come back to work.

‘Now in my case I was probably off for about 10 days. I knew I was unwell, but in fact the offness was more to do with the fact that I hadn’t been eating and was generally quite frail – I didn’t have persistent symptoms beyond that point.’

Government officials who have taken time off because of Covid-19

Dr Jenny Harries today revealed she had battled with the coronavirus. But what other government officials have also fought the illness?

Boris Johnson: On March 27 the Prime Minister announced he had tested positive for Covid-19. On April 5 he was then admitted to hospital. The day after he was moved to intensive care. On April 12 he left hospital.

Matt Hancock: On Friday 27 March, Mr Hancock also announced he would be isolating as he had mild symptoms, he continued to work from home.

Professor Chris Whitty: Also on March 27, Prof Whitty announced he would be self-isolating after the Prime Minister announced he had contracted the virus. He continued to advise the government from home.

Dominic Cummings: On March 30 it was announced that Mr Cummings would be self-isolating after experiencing Covid-19 symptoms. On April 14 he returned to work.

Dr Harries stands in for her boss, Prof Whitty, when he is unavailable to chair press conferences being held for journalists to inform members of the public on the coronavirus.

She has spoken at various briefings over the past few months.

Dr Harries did not detail when she had taken time off to battle the virus, but said she was off for a ten day period.

She appeared at a Downing Street briefing on March 12 and then again on March 24.

This may have been the time she had self-isolated, before her boss Prof Whitty.

She was then at briefings consistently – appearing from March 24 throughout the month.

She appeared on March 29 but then did not appear again until mid April, another possible time she may have been isolating.

At the end of March Prof Whitty decided to self-isolate after developing mild symptoms and returned to work on April 6.

Prof Whitty will have been in close contact with Dr Harries.

He had also been in contact with Mr Johnson and Mr Hancock, both of whom contracted the virus. 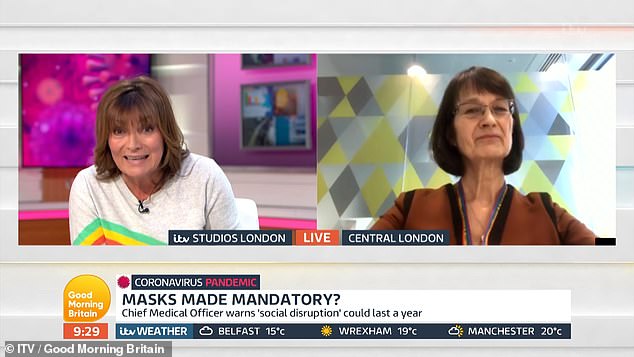 Prof Whitty self isolated days after it was announced that Mr Johnson had the illness.

Commenting on the fact that many doctors and nurses have been forced to work without adequate PPE, Dr Harries said the coronavirus pandemic is ‘entirely new for all of us’. 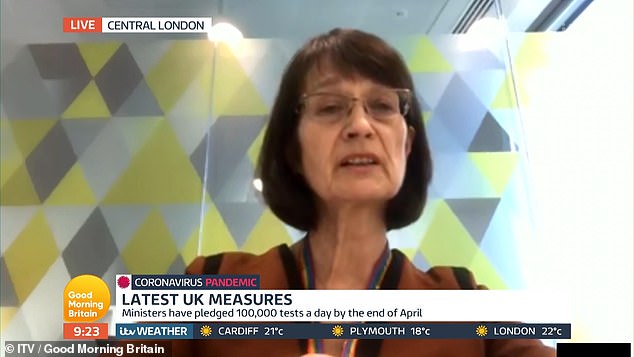 ‘So there is learning and there is review which needs to happen all the time and that applies to all the evidence we collect and all of our issues to do with managing PPE and PPE needs of our frontline staff, and indeed the testing.

‘It is so important our frontline staff have the right PPE. One of my personal slight frustrations is there is a lot of information out there which we can perhaps use to support them better, so understanding in detail.’

On the growing debate on whether or not members of the public should wear face masks, she added that it was important that the public left the supplies to front line workers.

‘For the average member of the public… it’s not quite as simple as just wearing a mask or not. The other thing is what mask are you wearing and how would you wear it?’

Asked about using masks in places where it is difficult to effectively social distance such as on Tube trains, Dr Harries said: ‘Taking aside the risk that you might actually be creating a problem, in a sense of trapping the virus and then not disposing of it carefully, there is probably a very, very small potential beneficial effect in some enclosed environments.

‘But the evidence is really very, very difficult to tease out.

‘It is not a simple yes or no, unfortunately.’