The UK was considered ‘internationally isolated’ when it extended the waiting time from three weeks to ensure more people got their first doses in February 2021.

Other countries, including the US and Israel, continued to offer second doses within the original dosing regimen recommended by Pfizer and BioNTech.

But Government scientists have now found that an interval of more than 10 weeks generates up to nine times more antibodies.

The study of nearly 6,000 healthcare workers suggested the effect was especially felt in younger age groups.

Experts said the research ‘strongly supports the decision’ made by No10 and the Joint Committee for Vaccination and Immunisation (JCVI) to extend the gap.

British Government researchers found having a dosage interval of more than 10 weeks can generate nine times more antibodies than having them less than four weeks apart. Graph shows: Covid antibody levels for different age groups who had never had the virus after receiving a second dose across four dosage gaps 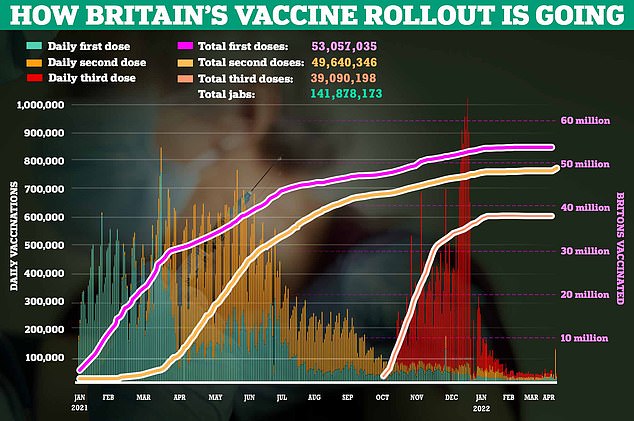 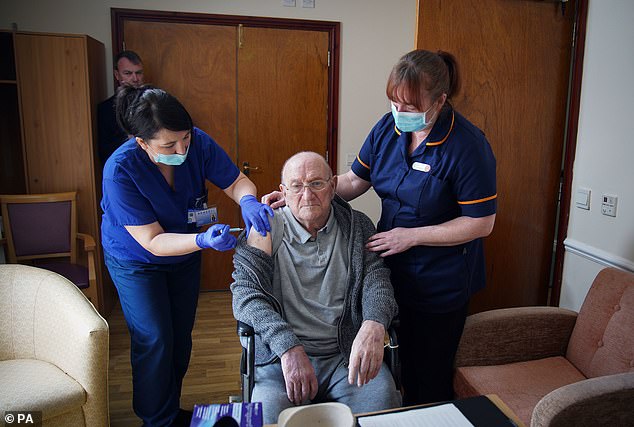 Just 19,482 new positive tests were recorded by UK Health Security Agency (UKHSA) over the last 24 hours, down 40 per cent on the 32,608 recorded last Thursday.

It is the lowest daily figure recorded since June 27, when 14,876 official cases were recorded. But the metric has become much less reliable now that free tests have been scrapped for the majority of Brits.

Despite the fall in cases, a recording backlog saw the number of deaths recorded today jump by 85 per cent in a week to 646. Fatalities have been fluctuating daily because of delays in reporting.

The number of people dying within 28 days of a positive test on average has been falling week-on-week for the last four days.

Experts have warned the constant stream of daily figures are now almost meaningless because they rely on people coming forward for tests, which has reduced massively since the end of free testing.

There is now clamour among many scientists for their publication to be scrapped entirely.

Third booster doses were introduced in October and accelerated in November to top-up people’s immunity during the Omicron wave – so long as six months had passed after their second.

And Britons aged 75 and over and the clinically vulnerable have now started receiving their fourth doses if it has been at least three months since their third jab.

Participants were mainly women (82 per cent) and were spread across the four nations of the UK.

The data came from the Government-backed SIREN study— the world’s largest antibody study of blood samples to detect levels of virus-fighting proteins.

Higher antibodies were seen across all age groups who had a longer gap.

Under-25s saw the biggest difference, with nearly 14 times the amount of antibodies after 10 weeks compared to three weeks.

But only one person in the age group had a second dose within three weeks — which may skew results.

Lead author Dr Ashley Otter, a molecular microbiologist at the UKHSA, said: ‘This study shows that a longer time between vaccine dose 1 and dose 2 results in higher antibody responses in naïve participants.

‘[It] strongly supports the decision by the UK’s Joint Committee on Vaccination and Immunisation and the UK Government to lengthen the interval between vaccine doses.

‘We’ve also shown that in those with previous infection, timing between exposure and vaccination plays a critical role in post-vaccination antibody responses.

‘However, further research is needed to determine whether these higher antibody levels provide greater protection against Covid and how this longer dosing interval may affect booster responses.’

The study only tracked antibody levels, which are just part of the immune response to viruses and do not show a patient’s entire protection against them.

Britain faced international backlash last year when it announced it would increase the dose gap to 12 weeks.

Pfizer and vaccine partner BioNTech said there was no data to back up the move and the British Medical Association (BMA) warned it made the UK ‘internationally isolated’.