Britain’s biggest coronavirus testing lab is hit by Covid outbreak after worker at Milton Keynes site that is targeted to process 70,000 tests a day claimed safety rules had been broken

The UK’s largest testing lab has been hit with an outbreak of coronavirus after staff members claimed it failed to follow safety procedures.

Three of the four scientific teams at the Milton Keynes Lighthouse Laboratory in Buckinghamshire have reported cases of Covid-19.

The lab was the first in the UK to officially record the new, more transmissible strain of coronavirus back in September, according to Public Health England.

Administrative and warehouse staff have also reported cases and 20 of a 70-person lab team are isolating, according to a staff member who wished to remain anonymous.

The outbreak threatens to strain the lab’s ability to keep up with rising demand for testing, after it was asked to process 70,000 tests a day.

The UK’s largest testing lab the Milton Keynes Lighthouse Laboratory (pictured in June, when Prime Minister Boris Johnson visited the facility) in Buckinghamshire has been hit with an outbreak of coronavirus after staff members claimed it failed to follow safety procedures

It processed 47,000 tests on Tuesday, the staff member said.

‘The whole thing’s a joke.’

The Department of Health and Social Care has denied claims that coronavirus safety procedures were broken to cope with rising demand.

A bubble system for workers to separate them recommended by the Health and Safety Executive was being ignored while the lab was short-staffed, the source claimed. 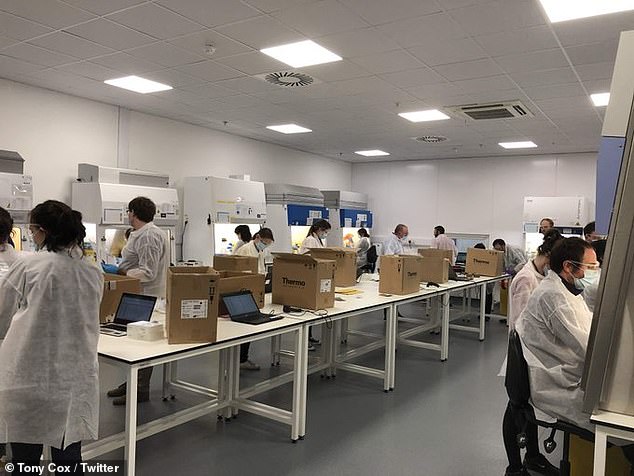 The outbreak threatens to strain the lab’s (pictured) ability to keep up with rising demand for testing, after it was asked to process 70,000 tests a day

The worker claimed there had staff were mixing in the building’s canteen and lobbies as well.

New recruits at the lab are tested when they arrive and sit in the canteen while they wait for results, the source said.

Staff at the Milton Keynes lab are working 12-hour shifts through Christmas in order to keep up with demand.

New testing labs were opened in two London university laboratories this month after case levels in the capital tripled in the last fortnight.

The UK announced 39,036 more cases of coronavirus and 574 deaths on Christmas Eve.

People have struggled to get tests in the city, with no testing centres being shown as available on Saturday when the capital was placed under Tier 4 restrictions.

The UK Biocentre was converted into the largest testing lab in the UK last April and was visited by Prime Minister Boris Johnson in June.

It dramatically increased the UK’s testing capacity but has been criticised for not being linked to the rest of the healthcare service enough. 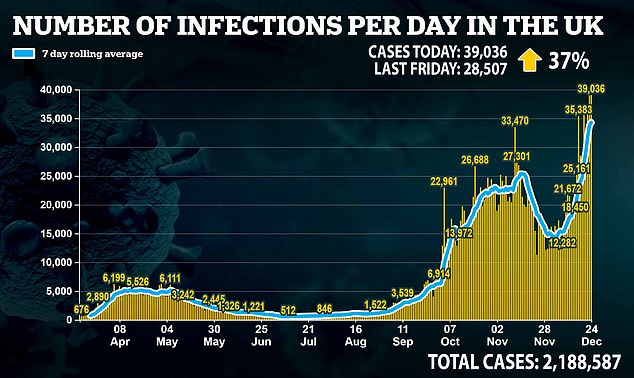 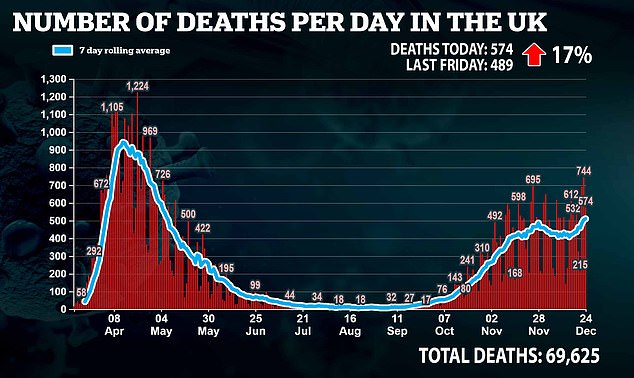 The Department of Health and Social Care confirmed the outbreak at the Lighthouse Laboratory but it said all government Covid guidelines had been followed.

DHSC said: ‘NHS Test and Trace continues to test record numbers of people and people can have confidence that if they have symptoms and need a test, they can get one.

‘We are delivering an unprecedented volume of tests – more than 450,000 yesterday alone – and during periods of high demand our focus is ensuring that anyone with symptoms can get a test.

‘All our test sites and our home test service will be available for bookings as normal over the Christmas period.’

CORONAVIRUS BACK TO PRE-LOCKDOWN LEVELS DUE TO SPIKES IN LONDON, EAST AND SOUTH-EAST ENGLAND

The number of people with coronavirus in England last week spiked to pre-second lockdown levels with almost 646,000 people carrying the illness, official figures show, but they are only rising in the south of the country.

An Office for National Statistics report yesterday estimated that 645,800 Brits were infected with the coronavirus between December 12 and December 18, the equivalent of one in 85 people, up from 570,000 the week before.

It marked a 14 per cent rise from last week’s figure and a 34 per cent jump from a fortnight ago, when the autumn lockdown ended in the first week of December.

Half of all new cases were the caused by the highly-infectious mutant variant of the virus that emerged in the South East of England in September, according to the ONS.

Its report found that London had become the country’s Covid-19 hotspot in the most recent week, with one in 45 Londoners carrying the disease by December 18.

Just a day later Boris Johnson scrapped Christmas mixing plans for people living in the capital, which led to thousands fleeing London that evening to lower tiered parts of the country.

There are now fears the mass exodus may have helped spread the new strain – thought to be at least 50 per cent more infectious than regular Covid – around the country.

The ONS report suggests England’s Covid crisis is being driven by London, the East and the South East, where there are higher rates of the new strain of the virus.

About two-thirds of people testing positive in these areas could have the new variant, the ONS said.

Every other English region has seen cases fall in the most recent week.