Boris Johnson today boasted that the UK will have ‘prodigious’ quantities of extra fish thanks to his Brexit deal – despite admitting he had made concessions to the EU.

The historic agreement struck with Brussels will mean Britain claws back 25 per cent of the bloc’s existing catch over the next five and a half years.

And the PM said it will regain complete control of the fishing stocks once that transition period ends.

However, the compromise was some distance from the UK’s initial demands to reclaim 80 per cent of the EU allocation over three years.

France has been boasting that the UK made ‘huge concessions’ on fishing, while Ursula von der Leyen said the EU had achieved ‘five-and-a-half years of predictability for our fishing communities and strong tools to incentivise’ continued access afterwards.

Asked at a No10 press conference, Mr Johnson admitted he had not got everything he wanted. 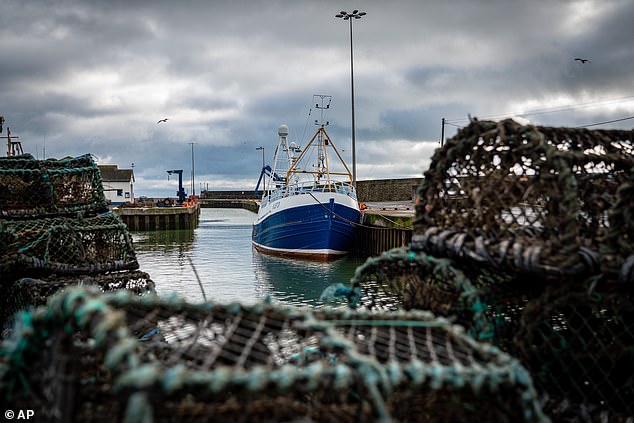 ‘The EU began with I think wanting a transition period of 14 years, we wanted three years, we’ve ended up at five years,’ he said.

‘I think that was a reasonable transition period and I can assure great fish fanatics in this country that we will as a result of this deal be able to catch and eat quite prodigious quantities of extra fish.’

He went on: ‘For the first time since 1973 we will be an independent coastal state with full control of our waters with the UK’s share of fish in our waters rising substantially from roughly half today to closer to two thirds in five-and-a-half years time after which there is no theoretical limits beyond those placed by science or conservation on the quantity of our own fish that we can fish in our waters.’

He continued: ‘Those fishing communities will be helped with a big £100 million pound programme to modernise their fleets, and the fish processing industry.’

The PM hailed a ‘jumbo Canada-style’ free trade agreement that averts a chaotic split when the transition period ends on January 1.

‘We have taken back control of our laws and our own destiny,’ he told a Downing Street press conference, swiping at Nicola Sturgeon and others who demanded an extension of the transition period during the coronavirus crisis.

Mr Johnson – who was wearing a tie adorned with fish in a nod to one of the toughest issues – said he hoped the package would pave the way for a ‘new stability and a new certainty in what has been a fractious relationship’.

‘I think we were told you cannot have your cake and eat it,’ he said. ‘I not going to claim this is a cake-ist treaty… but it is I believe what the country needs at this time.’

Mr Johnson insisted the government could now focus on its ‘No1 priority’ of tackling Covid.

Wishing the country ‘Happy Christmas’, he joked: ‘Now for the sprouts.’

Ursula von der Leyen told her own briefing in Brussels that the terms were ‘balanced’ but that the bloc had negotiated from a ‘position of strength’ because No Deal would have been worse for Britain. 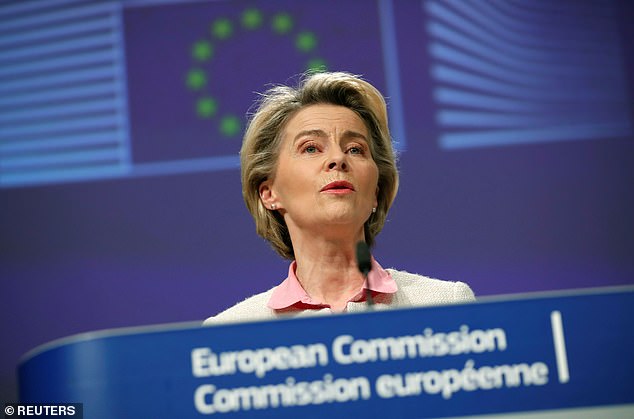 ‘We have finally found an agreement. It was a long and winding road but we’ve got a good deal to show for it,’ she said.

Ms von der Leyen said her overriding feeling was ‘relief’ rather than ‘joy’. ‘Parting is such sweet sorrow,’ she added.

Referencing one of his mantras from the talks, Michel Barnier told reporters: ‘The clock is no longer ticking.’

The confirmation had been repeatedly put back over the last 24 hours as the sides argued ‘fish by fish’ over the rules, with Ireland warning of a ‘hitch’, even though UK sources insisted there are ‘no major issues’.

But the battle to sell the package to voters and Tory MPs is already in full swing, as Mr Johnson rings round restive Tory backbenchers.

An internal government assessment insisted that the UK ‘won’ on 43 per cent of the major issues in the £668billion package, compared to 17 per cent where the EU came out on top.

There will be zero-tariff, zero-quota access to the EU single market – and Mr Johnson has maintained the ability to diverge from Brussels standards, with no role for the European Court of Justice. Disputes will be settled by an independent arbitration panel, similar to the structures already in the Withdrawal Agreement.

The document boasts that concessions were secured on rules of origin for goods, customs streamlining and ‘trusted trader’ schemes, while the financial services sector has been ‘insulated’.  A deal will also avoid huge disruption on top of the coronavirus crisis.

However, the UK looks to have given ground on fishing rights, and secured little succour for the services sector.

For its part, France has started boasting that Mr Johnson made ‘huge concessions’ on fishing in the last stages as the mutant coronavirus variant underlined the vulnerability of UK borders.

Tory Brexiteers vowed to put together a ‘Star Chamber’ of experts to scrutinise the documents over Christmas.

MailOnline understands that Mr Johnson was ‘very straightforward’ and did not try to give a ‘hard sell’ in his call with senior MPs.

One MP said subject to seeing the full text the outline was ‘what we hoped’. ‘Maybe it will be a happier Christmas after all,’ they suggested.

Nigel Farage accused Mr Johnson of ‘dropping the ball’ – but he also stressed that it was ‘progress’ and the Brexit ‘war is over’. He said pending seeing the text ‘in principle’ he would vote for the package if he were an MP.

There are fears that political ‘landmines’ in the text will inevitably be uncovered.

The FTSE 100 closed up just six points as a deal had been largely priced in, while the pound held on to recent gains and rose again slightly to 1.3547 against the US dollar.