The closely-watched PMI reading was the lowest in December for 31 months, since the depths of the Covid crisis.

Companies reported falls in output, numbers of new orders received and stocks, while prices continued to rise, although at a slower rate than before. The rating of 43.5 – with anything below 50 indicating activity contracting – was down from 46.5 in November.

The grim assessment in the S&P Global/CIPS survey came amid warnings Britain faces the deepest recession among the world’s largest economies in 2023.

Analysts at insurer Allianz Trade predicted UK plc will shrink 0.9 per cent this year as it is battered by rising energy bills, high interest rates and a rise in failing businesses.

That compares with an anticipated 0.7 per cent decline in Germany, a 0.4 per cent slump in France and a 0.3 per cent shrinkage for the US.

The report also warned firms across Britain and Europe would suffer a ‘massive profitability shock’ in the coming months from rising energy bills which would not be fully offset by government support measures.

As a result, Allianz predicted business insolvencies in the UK would rise by 15 per cent in 2023 to 27,100 as firms buckle under the weight of higher costs.

Analysts at insurer Allianz Trade predicted the UK economy will shrink by 0.9 per cent this year compared with a 0.7 per cent decline in Germany , a 0.4 per cent slump in France and a 0.3 per cent shrinkage for the US 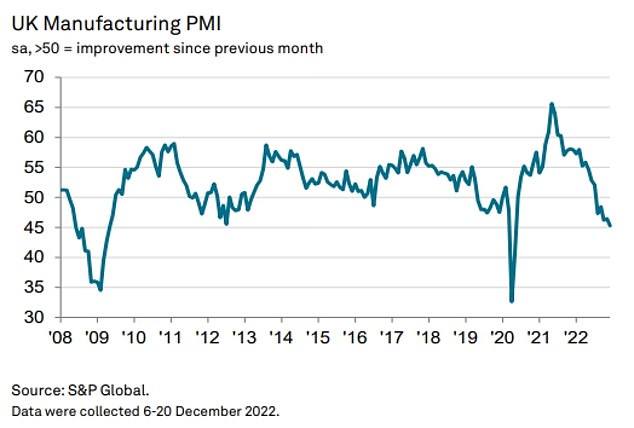 The closely-watched PMI reading was the lowest in December for 31 months, since the depths of the Covid crisis 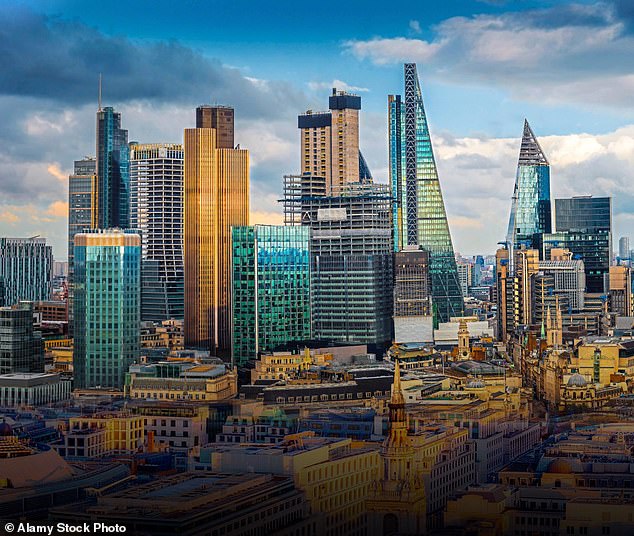 Allianz predicted business insolvencies in the UK would rise by 15 per cent in 2023 to 27,100 as firms buckle under the weight of higher costs

Meanwhile, analysts expected inflation to remain ‘uncomfortably high’ over the coming year, although the annual pace of price rises in Britain would cool to 7.5 per cent in 2023 from 9 per cent last year.

Overall, Allianz concluded the global economy was ‘still headed towards a recession’ in the coming months, predicting worldwide growth of just 1.4 per cent for 2023, down from 2.9 per cent last year, before rebounding to 2.8 per cent in 2024.

Maxime Darmet, senior economist at Allianz Trade, said global trade would ‘continue to slow’ with the manufacturing sector particularly hard hit by lower demand and some companies trying to lower their stock levels due to previous oversupply.

Apart from the early days of the pandemic, the manufacturing PMI reading was one of the one of the worst since mid-2009.

‘Output contracted at one of the quickest rates during the past 14 years, as new order inflows weakened and supply chain issues continued to bite,’ said Rob Dobson, director at S&P Global Market Intelligence.

‘The decline in new business was worryingly steep, as weak domestic demand was accompanied by a further marked drop in new orders from overseas.’

It is the fifth month in a row that the manufacturing PMI score has shown that the sector is in decline, while production fell for the sixth consecutive survey.

Exporters reported low demand from China, the US, mainland Europe and Ireland, largely due to weak economic conditions around the world.

Some companies also mentioned shipping delays, higher costs and other issues all linked to Brexit.

‘Clients are increasingly downbeat and reluctant to commit to new contracts, not just in the UK but also in key markets like the US, China and the EU,’ Mr Dobson said.

‘The weakness in the latter is still being exacerbated by the constraints of Brexit, as higher costs, administrative burdens and shipping delays encourage increasing numbers of clients to shun trade with the UK.’

The Allianz conclusion echoes a warning from Kristalina Georgieva, managing director of the International Monetary Fund (IMF), who predicted a third of the world economy will be in recession this year.

Ms Georgieva warned the US, EU and Chinese economies were all slowing simultaneously and that the growing Covid outbreak in China would slow economic activity across the globe.

The comments came after the IMF cut its 2023 outlook for growth in October, saying the war in Ukraine, inflation and rising interest rates would drag on the world economy.