Britain today recorded 59 more coronavirus deaths in an early count as the number of fatalities from the virus continues to rise.

Two thirds of the victims were in the North West, North East and Yorkshire. Wales recorded three new fatalities. Scotland and Northern Ireland both announced one further laboratory confirmed death.

Department of Health bosses will release the official count, along with the number of new Covid-19 cases recorded in the last 24 hours, later this afternoon.

Yesterday the UK announced another 76 deaths, a seven per cent rise in a week, and more than double the number of victims posted last Tuesday, when there were 35. The rise meant the total number of deaths from Covid-19 as of yesterday stood at 42,445.

On Wednesday last week a further 71 deaths linked to coronavirus were recorded in the final count.

The spiralling statistics come amid mounting fears the UK could face new draconian lockdown measures within days under plans for a local ‘Covid alert’ system – which could see pubs and bars forced to pull down the shutters.

And Boris Johnson was today confronted by an enraged Labour at a stormy Prime Minister’s Questions over damning figures revealing how tightened lockdown restrictions had failed to deliver a drop in the spread of the virus.

As the number of deaths from coronavirus continues to rise: 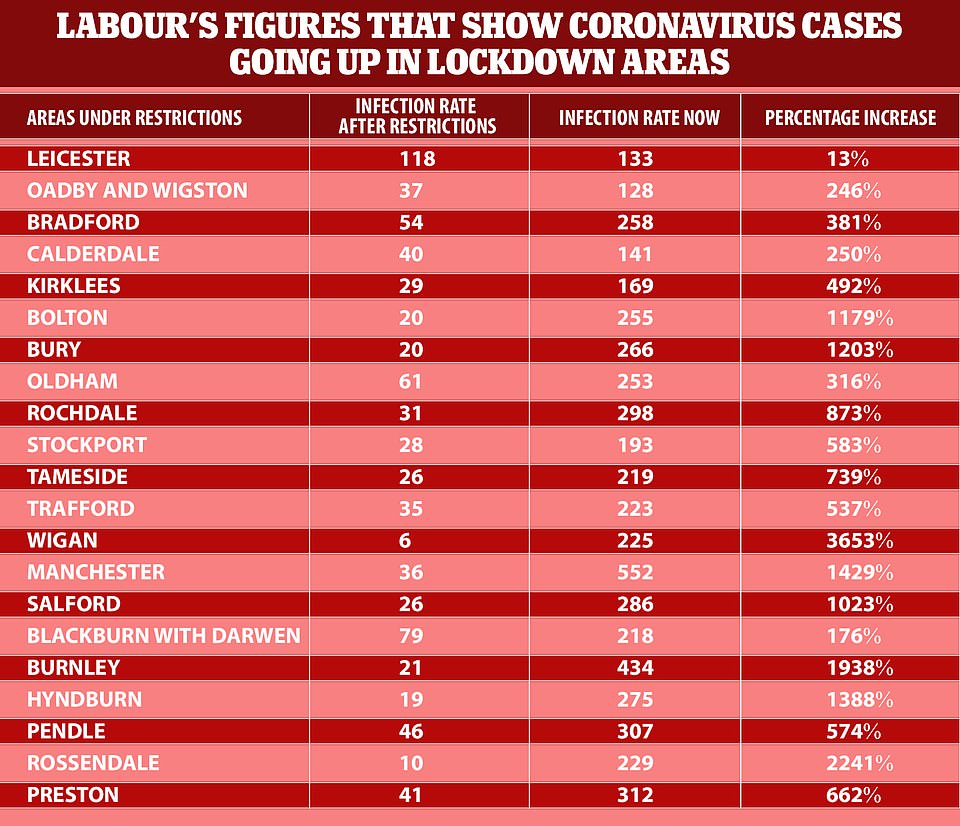 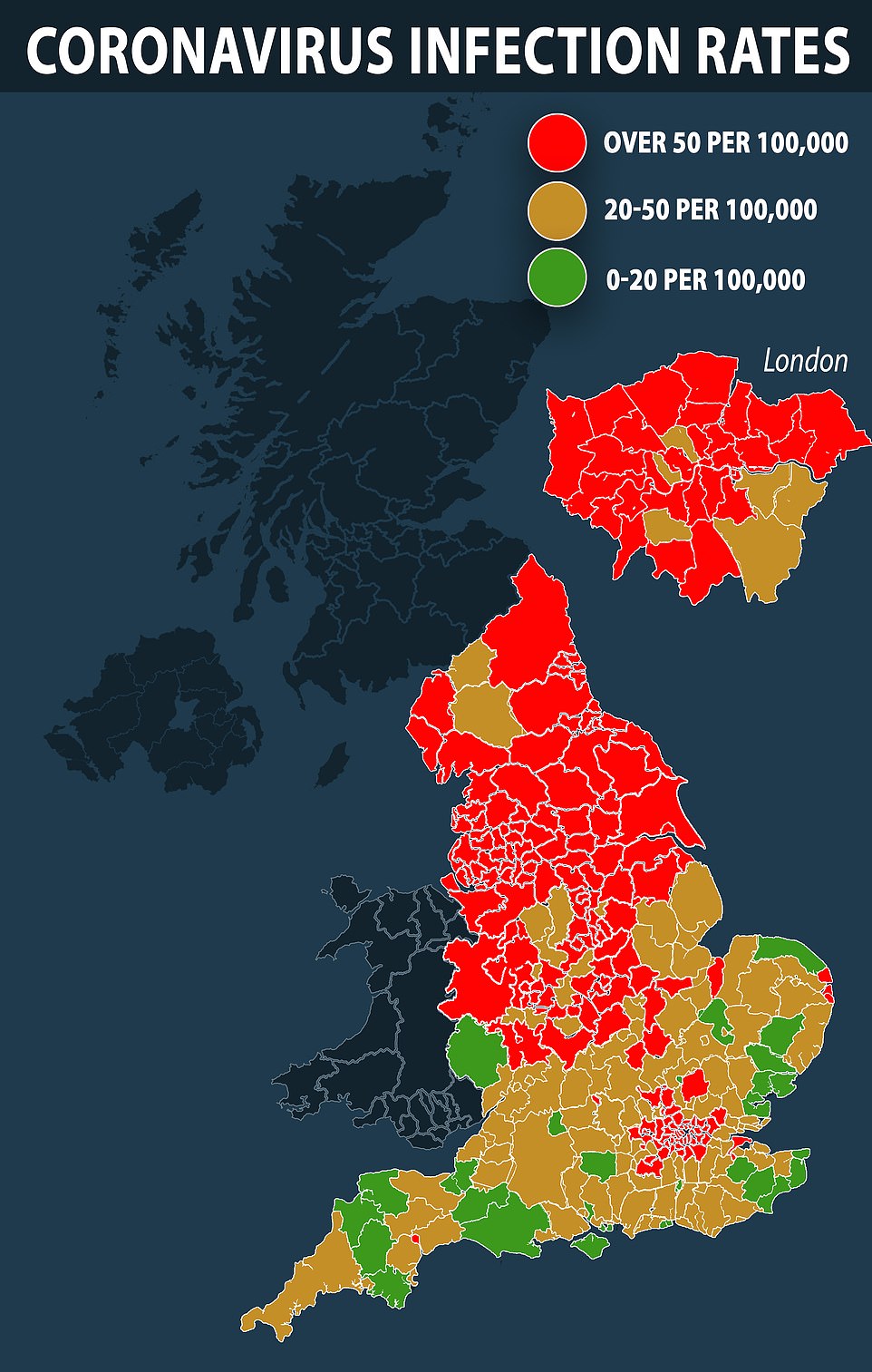 Nicola Sturgeon restricts pubs, bars and restaurants opening times to 6am to 6pm

Nicola Sturgeon warned that coronavirus cases have started to surge among the older generation today as she banned pubs and restaurants from serving alcohol indoors in Scotland for at least 16 days from Friday.

The First Minister told MSPs at Holyrood that the situation was ‘better than March’, but admitted she needed to take a ‘backward step’ as she unveiled a dramatic ‘circuit breaker’ squeeze to coincide with the school half-term north of the border.

As well as a ban on serving alcohol, hospitality venues will only be allowed to open from 6am to 6pm.

In five ‘hotspot’ areas pubs will be closed altogether until October 26 and people will be advised against using public transport.

Ms Sturgeon said that if it was ‘a purely one dimensional decision’ about public health there would be an even tougher lockdown, but she was considering the wider economy and wellbeing.

The extraordinary step – which Ms Sturgeon said would be accompanied with new compensation for stricken businesses – comes after Scotland reported more than 1,000 new infections in a day.

It will heap pressure on Boris Johnson, who was confronted this afternoon with damning figures showing local restrictions in England are failing to curb cases, with ministers and advisers at war over what to do next.

Deaths from coronavirus across the UK have continued to rise since mid-September. On Monday the average number of daily deaths surged by 46 per cent, reaching 53-a-day, the highest number since the end of June.

Health bosses have also been reporting a surge in cases, with the UK recording a further 14,542 new infections yesterday, as tightened restrictions across the North West and North East attempt to put the brakes on the rise in infections.

Hospitalisations from coronavirus in England have also risen, with 478 new admissions reported on Sunday as the weekly rolling average rises by 34 per cent. The number of people needing a ventilator increased to 393 on Monday, a 40 per cent rise in the rolling average.

As infections continue to rise across the UK, Nicola Sturgeon is expected to announce tighter lockdown restrictions in Scotland in a move that may bounce the Prime Minister into imposing more restrictions across the UK.

The First Minister used a statement to Holyrood to unveil a dramatic ‘circuit breaker’ squeeze to coincide with the school half-term north of the border.

The Prime Minister was confronted with damning statistics this afternoon which revealed tightened local restrictions have failed to curb the spread of coronavirus across the North of England, while ministers and advisers face mounting questions over what action they will take next.

At a stormy PMQs session, Mr Johnson stressed the impact of the surge was being felt worst in the North, saying that showed the Government’s mix of tough local lockdowns and national restrictions like the Rule of Six and the 10pm pubs curfew was the right one.

The backing for ‘differentiated’ measures in England suggests that the premier is still resisting pressure from scientists for a blanket crackdown – in an apparent boost for Cabinet ministers alarmed over the threat to millions of jobs and civil liberties.

But Labour leader Keir Starmer launched a furious attack on Mr Johnson in the Commons, saying 19 out of 20 areas subjected to local curbs over the past two months have actually seen infections rise. He insisted that the measures were ‘not working’, and singled out the controversial 10pm curfew on pubs saying the government had failed to provide any ‘scientific basis’.

As chaotic infighting threatened to engulf the government, allies of Chancellor Rishi Sunak, regarded as the leading ‘hawk’ on the need to protect the economy, today denied claims he has been trying to shut ‘dove’ Michael Gove out of decisions on what areas will be subject to the most draconian restrictions. The wrangling is believed to be holding up the announcement of a new three-tier ‘traffic light’ system, intended to clear up confusion about what rules apply where in England.

In bruising clashes with Sir Keir, Mr Johnson seemed to close off the possibility of an imminent national clampdown.

‘The key point there is the local regional approach combined with the national approach remains correct because two-thirds of those admitted into hospital on Sunday were in the North West, North East and Yorkshire.’

But Sir Keir unleashed a tirade, pointing out that the government’s local lockdown were clearly ‘not working’.

‘On care homes, protective equipment, exams, testing. The Prime Minister ignores the warning signs, hurtles towards a car crash, then looks in the rear mirror, says ‘what’s all that about?’ he said.

‘It’s quite literally Government in hindsight.’

Fears over shortage of Covid and cancer tests after ‘warehouse’ failure

Concerns have been raised over the supply of vital testing materials for a range of conditions, including Covid-19, following a supply chain problem with pharmaceutical giant Roche.

On Tuesday, Roche said it had experienced a ‘very significant drop’ in its processing capacity due to a problem with its Sussex distribution centre in Newhaven, the only one in the UK.

It has been reported that the shortage includes vital reagents, screening kits and swabs.

In addition to providing these chemicals and parts used in Covid-19 tests, Roche also provides materials for a wide range of procedures including blood and urine tests, as well as diabetic care.

It comes days after the Government confirmed a technical glitch meant 16,000 positive test results had been missed, leaving contract tracers chasing thousands of contacts who needed to self-isolate.

The Government is facing mounting pressure to increase coronavirus testing capacity as cases continue to rise, with 14,542 new cases recorded yesterday – meaning the number of people testing positive for Covid-19 every day has tripled in a fortnight.

The Labour leader pointed out that in Mr Johnson’s own local authority, Hillingdon, there were currently 62 cases per 100,000, and no local restrictions.

‘But in 20 local areas across England, restrictions were imposed when infection rates were much lower. In Kirklees it was just 29 per 100,000,’ he said.

‘Local communities, Prime Minister, genuinely don’t understand these differences. Can he please explain for them?’

Mr Johnson replied: ‘I wish I could pretend that everything was going to be rosy in the Midlands or indeed in London where, alas, we are also seeing infections rise.

‘That is why we need a concerted national effort, we need to follow the guidance, we need hands, face, space, get a test if you have symptoms and obey the Rule of Six.’

Sir Keir insisted that he does support the Government’s Rule of Six.

But he struck a starkly different tone on whether Labour will support the England-wide 10pm curfew on bars and restaurants, which critics say is causing more harm than good as revellers merely spill out on to the streets.

‘Next week, this House will vote on whether to approve the 10pm rule. The Prime Minister knows that there are deeply-held views across the country in different ways on this. One question is now screaming out: is there a scientific basis for the 10pm rule?’

Mr Johnson shot back: ‘The basis on which we set out the curtailment of hospitality was the basis on which he accepted it two weeks ago – that is to reduce the spread of the virus and that is our objective.’

As cases continue to mount Scotland is reportedly facing the prospect of even tighter restrictions across the nation. Nicola Sturgeon is set to unveil a dramatic squeeze this afternoon, expected to include swingeing curbs on the hospitality sector and local travel.

The move – which she has stressed will not amount to a full lockdown as happened in March – comes after the First Minister received ‘very strong’ advice about the need to respond to a surge in infections. 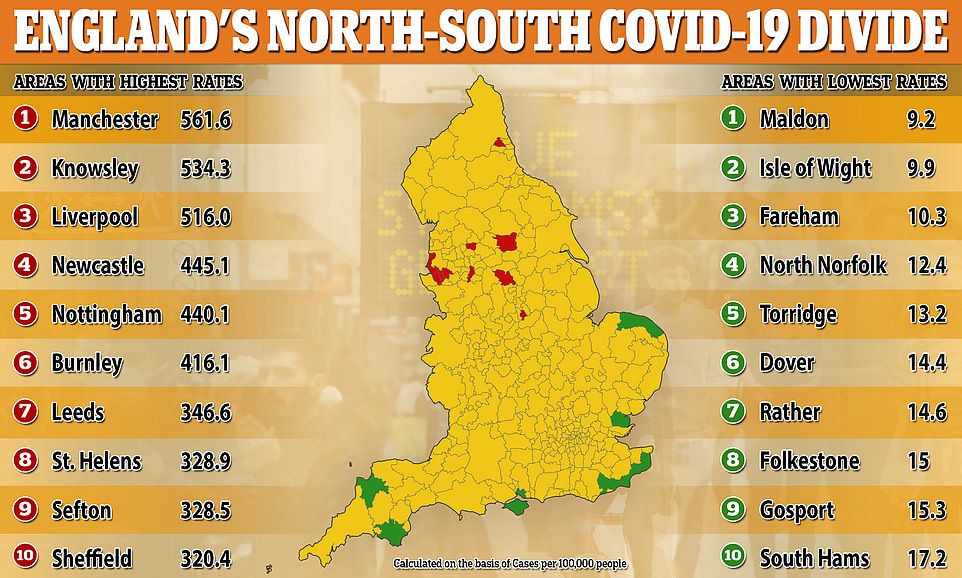 At her daily briefing yesterday, Ms Sturgeon said Infections were beginning to spread from younger sections of the population to older age groups. The average number of daily cases has risen from 285 two weeks ago – when a ban on households mixing indoors was introduced – to 729.

The First Minister has described the situation as ‘the most difficult decision point we have faced so far’.

However, the closure of schools has been ruled out, as have Scotland-wide travel restrictions.

There will be no requirement for people to stay inside their homes most of the time, as was the case in March, though some additional measures in ‘hotspot’ areas might be necessary.

Speaking at the daily coronavirus briefing, the First Minister said she was receiving ‘very strong’ public health advice that new measures were needed in response to rising Covid-19 cases.

Ms Sturgeon added: ‘The situation is not out of control, but it is a cause of increasing concern.’