The UK has recorded 553 hospital deaths from coronavirus on Christmas Day.

The grim figure, which is for Covid-related hospital deaths in the last 24 hours, compares to 403 a week ago.

Of the figures recorded in the last 24 hours, 401 deaths in England were for patients who tested positive for the virus and 33 where it was mentioned on the death certificate.

None of the deaths were under 40 years old, according to the latest data.

It means the total number of confirmed deaths reported in hospitals now stands at 48,150 people.

The latest figure comes as a new strain of coronavirus grips the nation. The strain is thought to be better at spreading, but is not yet thought to be more deadly.

Another 401 people have died from coronavirus in hospitals in England, according to the latest data. Pictured, Matt Hancock revealing further restrictions on December 23 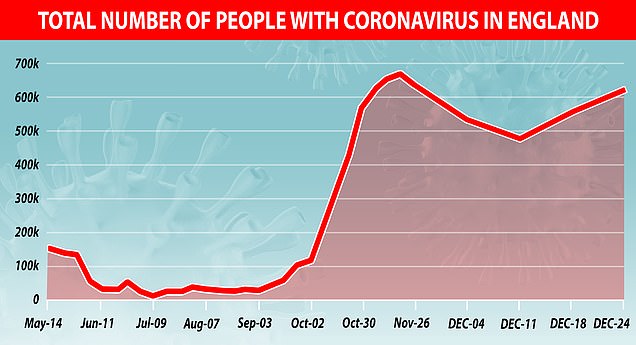 Along with the figures for England,

Wales has recorded a further 63 deaths in hospitals over the past 24 hours, taking the total to 3,263 with another 2,161 infections.

It comes as it was revealed one in every 85 people in England are now infected with coronavirus, half of them have caught the new super-infectious strain and cases in London have trebled in two weeks. 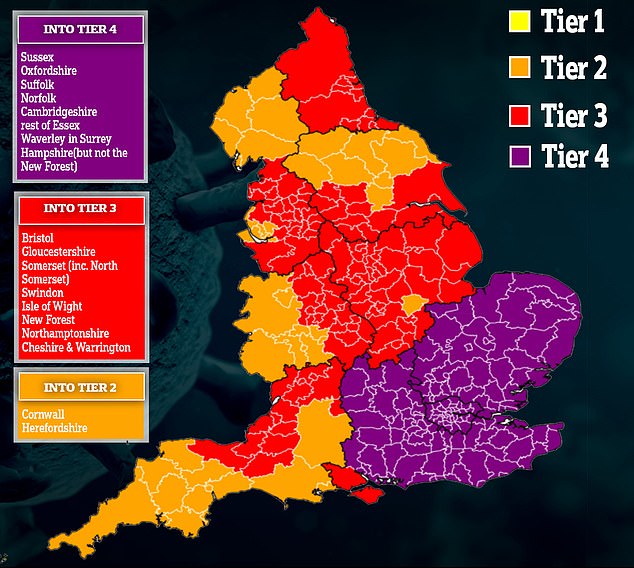 But Office for National Statistics (ONS) data shows the epidemic is being driven by southern regions, where the variant has become the dominant strain, with cases still falling of flattening in the North and Midlands, where it is yet to become widespread.

Officials fear, however, it is only a matter of time before the mutant variant – which is up to 56 per cent more infectious than regular Covid and was first detected in Kent in September – becomes prevalent everywhere.

About two-thirds of people testing positive in London, the East and the South East, are thought to have the new variant, the ONS said. Nationally, the strain is thought to make up 50 per cent of infections.