Britain records 53,135 Covid cases in record daily high and another 414 deaths with Boris Johnson set to decide new tiers TONIGHT amid fears two-thirds of England will fall under Tier 4 from tomorrow

Britain today recorded 53,135 cases of coronavirus in a record daily high and 414 deaths as the second wave of the disease continues to grow with a highly-infectious strain spreading rapidly across the country.

Department of Health figures reveal the infection toll is the largest yet recorded, and is a sharp 44 per cent rise on Tuesday last week when 36,804 cases were diagnosed.

But the true scale of the Covid crisis in the first wave remains a mystery because of a lack of testing, meaning it is impossible to tell if this is Britain’s worst day of the pandemic so far. Top scientists estimate up to 100,000 people were catching the disease every day during the darkest days of the spring.

The number of fatalities announced marked a 44 per cent fall compared to the same time the previous week, when 691 were recorded.

Dr Susan Hopkins, the senior medical adviser at Public Health England, said: ‘We are continuing to see unprecedented levels of COVID-19 infection across the UK, which is of extreme concern particularly as our hospitals are at their most vulnerable. Whilst the number of cases reported today include some from over the festive period, these figures are largely a reflection of a real increase.

‘It is essential, now more than ever, that we continue to work together to stop the spread of the virus, bring the rate of infection down, and protect the most vulnerable and the NHS.

‘A critical part of this is each and every one of us abiding by the restrictions in place however hard it may seem at this time of the year. It is critical that we reduce our contacts especially mixing between households. We must observe the basic measures – wash your hands, wear a mask and keep your distance from others.’

The stunning figures come as Boris Johnson prepares to convene a meeting of his Covid-O committee tonight to decide the Government’s latest tiers shake-up.

There were warnings today that up to two thirds of England, including swathes of the North and Midlands, could be plunged into Tier 4 – with non-essential shops and gyms ordered to close.

Covid hospital admissions are rising in every region, with NHS units in England now treating more patients than they were in the first wave.

There are growing reports England could face ‘Tier 5’ measures in the coming days, in a bid to curb the spread of the mutant variant, with secondary schools forced to close – but this is yet to be confirmed by officials.

Scientists guiding the Government through the pandemic are understood to have advised Mr Johnson to impose tougher measures than those rolled out in November’s lockdown.

One of Number 10’s scientific advisers today warned England must be plunged into a third national shutdown to prevent a ‘catastrophe’ in the New Year.

Professor Andrew Hayward, an epidemiologist at University College London and member of SAGE, warned the country is entering a ‘very dangerous new phase of the pandemic’.

He called for ministers to ‘learn the lessons’ of earlier waves, when the Government was criticised for being too slow to lockdown, and to act early this time.

Around 24million people living in London, the South East and the East of England are already under the harshest Tier 4 curbs.

But more regions and local authorities are feared to be set to join them after Number 10’s leading scientists admitted they cannot stop the spread of the highly-contagious mutation that officials believe is to blame for rapidly spiralling cases.

This is breaking news story. 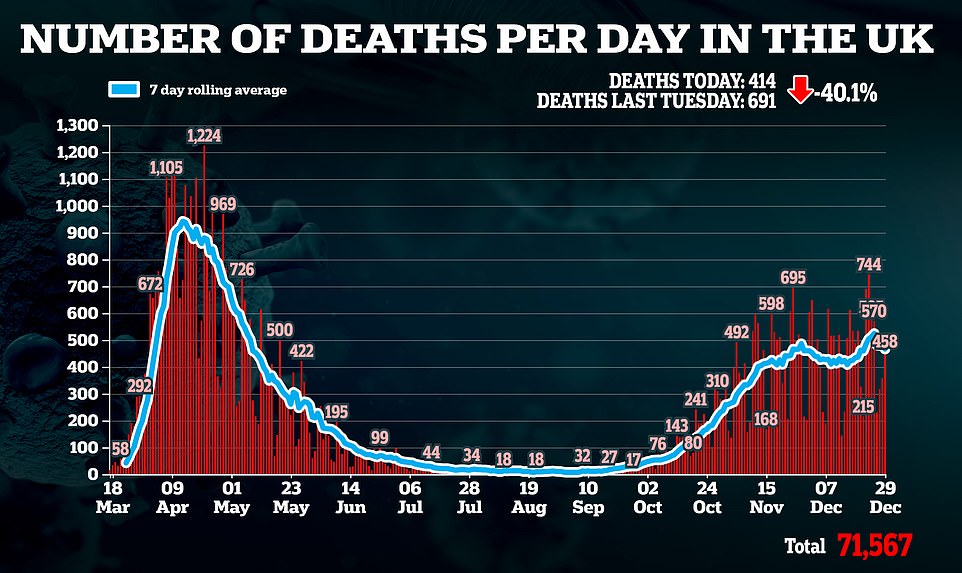