Britain records 13,972 new coronavirus cases and 50 more deaths as daily infections jump by 11% in a week

The UK today announced 13,972 new coronavirus cases and 50 more victims as millions of Brits were plunged into deeper lockdowns.

Today’s new infections are up 11 per cent from last Monday, when 12,594 cases were recorded, and triple the 4,368 recorded on Monday, September 21.

Data on September 28 was rendered invalid due to a counting blunder at Public Health England (PHE).

It’s possible that today’s infection count is an underestimate, due to a recording lag over weekends which skews figures on Mondays downwards.

The rolling seven-day average of daily infections — considered a more accurate measure because it takes into account day-to-day fluctuations — is 14,588.

Today’s 50 new deaths are more than double the number of victims recorded last Monday and almost quadruple the amount the previous week.

Data shows the rolling seven-day average number of daily deaths is 72, having crept up from a record-low of seven in mid-August.

It comes as Boris Johnson today plunged millions of people deeper into coronavirus lockdown as he delivered a grim warning that he country is teetering on the brink again.

Unveiling his new ‘Three Tier’ system to MPs, the PM declared that the highest restrictions will mean pubs being shut and households banned from mixing altogether. 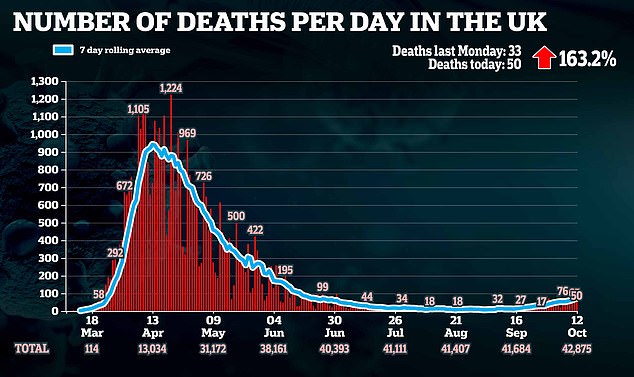