Britons have been warned to brace for a wet and windy weekend with gales expected to reach 46mph as an inch of rain falls across the nation’s hills.

Then snow could hit Britain for 72 hours later this month as a cold Arctic snap is set to blast the country, forecasters have revealed.

They added: ‘Our charts show from Tuesday, November 17 to Thursday, November 26 there’s a line that says although uncertain, temperatures are looking to become colder.

‘From December it says chances of wintry precipitation could be increasing on higher grounds. We’d expect to see snow on the Scottish mountains from late November into December.’

Stormy weather battered Blackpool’s north shore this morning. Meanwhile, a spokesman for the Met Office told MailOnline it was difficult to predict exactly where snow could fall at the end of the month, but that mountains in Scotland will be covered in the white stuff by the end of the month 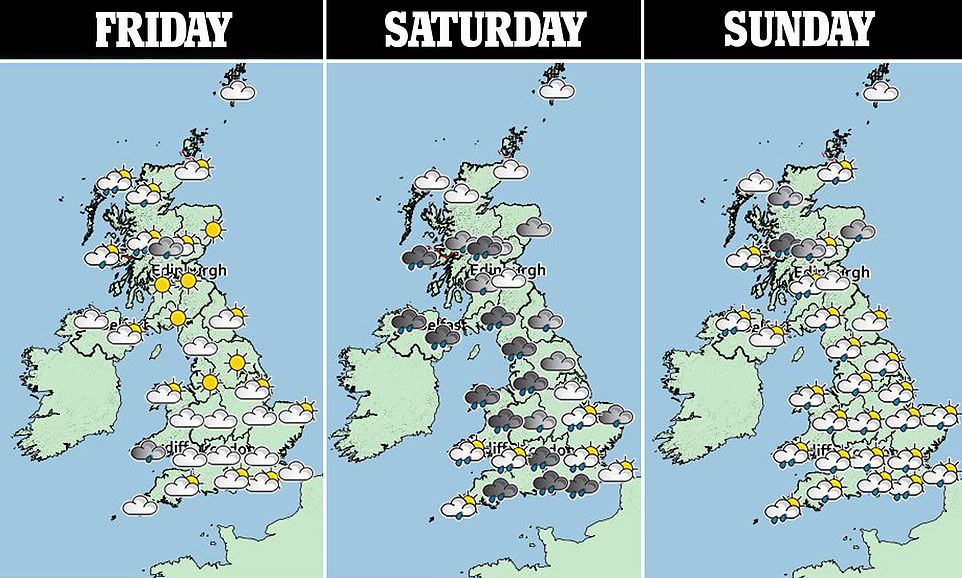 Elsewhere, the UK was warned to brace for a wet and blustery weekend as wind speeds are expected to reach as high as 46mph along the south west coast.

Temperatures will stay around 55F (13C) across the country but rain will blow in from two seperate weather systems across Saturday and Sunday.

A Met office spokesman told MailOnline: ‘It is going to be an unsettled autumnal weekend. Conditions for most will be fine throughout today but it will be blustery in the far northwest of the country.

‘It is a brighter finer day today. We’ve had a band of rain that moved west to east across the UK overnight. That is just clearing across the far east and behind it comes clearer conditions and some sunshine away from the far northwest which will be blustery.’

This month’s winter weather is expected to hit in the north of the country, with a layer of snow likely to settle over Scotland between November 19 and November 21.

The cold snap could then move south as the arctic air brings snow to the whole of the UK towards the end of this month, WxCHARTS’ suggested. Its snow depth forecast revealed a 30 to 40 per cent change of snow for the last week of the month in northern areas of the country.

According to The Sun, the forecast said: ‘The greatest likelihood of snowfall will be over the hills in the north and west, especially in Scotland.

‘A couple of these short cold snaps might be expected to occur during the course of this two week period.’

Wintry conditions can be expected on higher ground in northern regions in December, according to the Met Office. 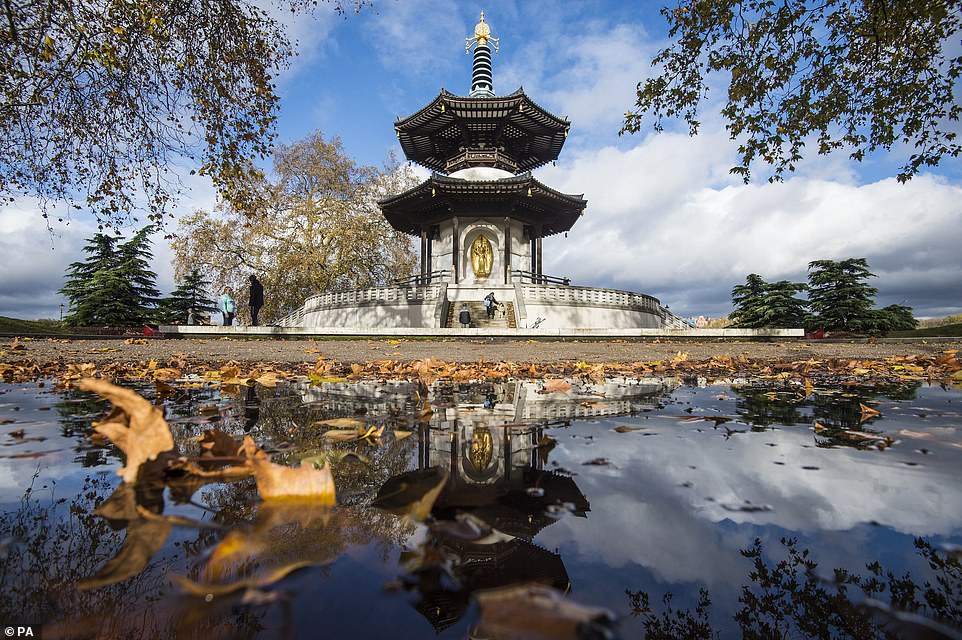 The Peace Pagoda in Battersea Park, London, yesterday. This weekend blue skies will be replaced with blustery wet conditions, according to a Met Office spokesman

The forecasters’ long-range forecast said: ‘The chance of wintry precipitation could be increasing into December, notably for northern higher ground.’

In terms of this weekend’s weather, despite a promising start today the weather will start to turn from tonight.

A Met office spokesman added: ‘There will be increasing cloud moving in from the southwest into the evening.

‘Overnight tonight there will be further cloud and then rain moving in from the southwest. Rain is moving in and as we go through the day everywhere in the UK will see rain and increasing windspeeds.

‘There is the potential for coastal gales reaching between 39 and 46 mph along the south coast and south west.’

Rainfall on Britain’s higher landscape – including the Brecon Beacons and Dartmoor – could reach up to 20 mm, the spokesman revealed.

‘There are no warnings currently in place but this could change. South Wales, the Brecon Beacons, Dorset and Hampshire could see high accumulations of rain with as much as 15-20mm of rain and the change of more.

‘Everywhere will see a blustery wet day on Saturday. This moves through in the evening time with some brightness before sunset.

‘Then as we go into Sunday there will be more unsettled weather. A band of rain from another system will come in from the west.’

Ultimately Britons should prepare for a ‘generally unsettled wet and windy weekend’, according to the national forecaster.

They added: ‘It will remain unsettled at the start of next week with a brief spell of calmer weather on Monday.’