Britain at its best: A hike to a haunting hill in Lancashire that’s steeped in grizzly witchcraft history – but that will leave you spellbound

By Angela Epstein for the Daily Mail

The isolated outcrop that is Pendle Hill broods over the East Lancashire landscape. And there’s no denying it’s an imposing presence.

Once an ancient hunting ground, the hill looks like a long, slumbering dog, its shaded upper slopes impervious to autumn sun.

This inscrutable mound – sometimes referred to as the roof of Lancashire – stands disquietingly alone, in sharp contrast to the neighbouring Pennines and merry greenery of the Forest of Bowland (rightly badged an Area of Outstanding Natural Beauty). But there’s something else.

Spooky: The River Ribble with Pendle Hill beyond.

As we park up in the hamlet of Roughlee at the foot of Pendle Hill, about six miles from Burnley, we’re reminded of other reasons why this landmark appears so sinister. Especially at this time of year, around Halloween.

For as we lock the car, strap rucksacks on our back and begin cresting the lane out of the village, we pass the statue of a woman named Alice Nutter.

This wealthy farmer’s widow was one of ten people from the villages around Pendle Hill who were hanged following the infamous Pendle witch trials in 1612, when a climate of superstition led to the persecution of those thought to be practising witchcraft.

Her image is disturbing. With her wrists shackled in chains, Alice is depicted on her way to Lancaster’s Gallows Hill, after being found guilty of maleficium — causing harm by witchcraft. 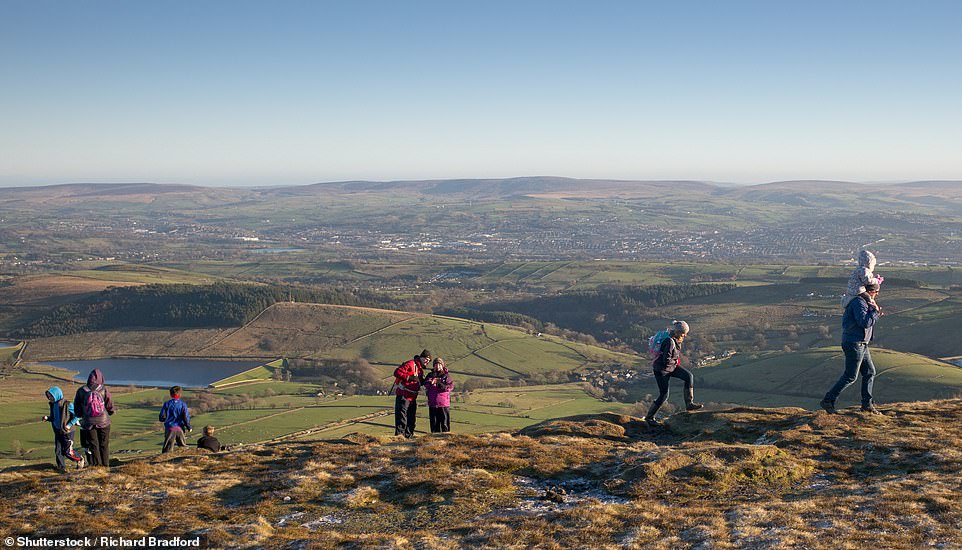 Angela says of a hike up Pendle Hill: ‘The climb can be steep (depending on the route), but the views towards the Yorkshire Dales and across the Forest of Pendle provide ample reward.’ (Above, stock image)

That’s not to say a visit to Pendle Hill is unpleasant. Though in Tier Three and off limits for now, the climb can be steep (depending on the route), but the views towards the Yorkshire Dales and across the Forest of Pendle provide ample reward.

The sense of space is exhilarating. Just watch out for witch characters on some of the footpath signposts. Today we are circling the hill — and as we continue our ramble along a stream, passing the Roughlee waterfall, we’re uplifted by the scenery of rolling fields.

Despite being steeped in such grizzly history, the villages surrounding Pendle Hill have escaped full-throttle Disney-esque commercialism. In fact, when we drop by the village of Newchurch-in-Pendle, the heart of Pendle Witch Country, the association is quite tasteful. 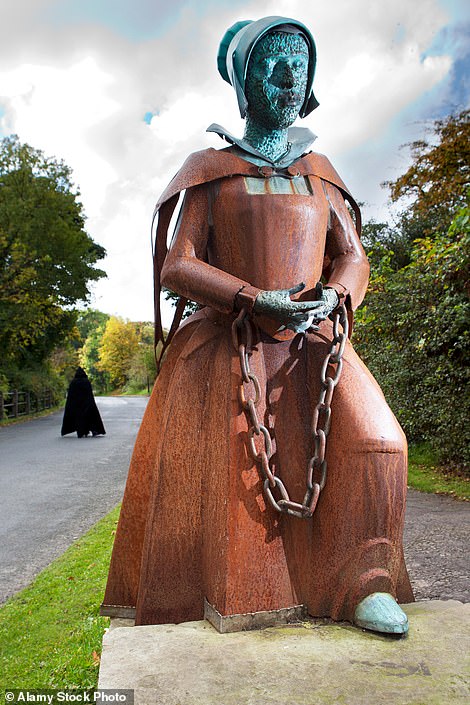 Sure it’s hard to resist mooching around the famous Witches Galore shop, with its crystals and handmade models of witches.

But the village is also home to St Mary’s Church, whose original chapel dates back to 1250. Here the witches take a more ghostly form, for members of the Nutter family are buried here, and some believe Alice herself was secretly laid to rest in the churchyard.

Indeed, when the church was rebuilt in 1740, stone masons fashioned an ‘eye of God’ into the turret in order to protect the area from the influence of sorcery. The fat circular imprint is still visible today.

Leaving Newchurch-in-Pendle, we push on and picnic by the river in the pretty village of Barley.

In 2012, 482 people dressed as witches gathered on the green here to commemorate the 400th anniversary of the witch trials — a world record for the largest number of ‘witches’ assembled in one place. If it’s compact history you want, a trip to the Pendle Heritage Centre in the nearby village of Barrowford offers a lively insight into life here in the 1600s.

It’s getting dark as we return to our car. Is the witching hour almost upon us? Well, it’s hard not to feel bewitched by this magical corner of East Lancashire. But as Pendle Hill retreats in the rear-view mirror, and Alice Nutter’s statue endures on the roadside, we remember magic can be dark, too.

For places to stay, restaurants and more information on the Pendle Witches walking trail, see visitpendle.com.