A further 52 coronavirus deaths have been announced in the UK’s early count this afternoon, with 43 in England, seven in Scotland, one in Wales and one in Northern Ireland.

The numbers add to evidence that the death count is continuing to grow as cases surge, but the daily average remains 95 per cent lower than it was at the peak.

The seven fatalities in Scotland are its highest one-day increase in more than three months, since there were nine announced on June 17.

A full round-up of the whole UK’s fatalities and new cases is expected from the Department of Health later this afternoon.

Prime Minister Boris Johnson is expected to hold a television briefing at 5pm today to impress on the nation the importance of following social distancing rules.

Mr Johnson is facing backlash against the use of his chief medical advisers Professor Chris Whitty and Sir Patrick Vallance, who are also set to appear in the briefing, as ‘scientific propaganda’ to justify tough social distancing rules.

Cases have this week hit an average of 6,087 per day with 7,143 confirmed yesterday.

Positive tests are now higher than they were even at the peak of the crisis but this is because 10 times as many tests are being done, not because the outbreak is bigger.

Tensions are running high in Westminster as the numbers of coronavirus cases continue to grow but ministers are divided over what to do.

The PM has been urged to drop scientists Sir Patrick and Professor Whitty from TV briefings, with complaints that they are being used as ‘propaganda’ to back up increasingly draconian restrictions.

MailOnline understands some Cabinet ministers are increasingly frustrated by the dire warnings from the medical and science chiefs about a second wave.

Former Downing Street aides have been calling on the government to take the experts out of the limelight, warning they are not great communicators and it gave the impression decisions were clear cut rather than a matter of judgement for ministers.

Senior Conservative Sir Bernard Jenkin upped the ante today by saying that the Government is using ‘science as propaganda’.

‘We saw during the Iraq war, intelligence being used as a propaganda,’ he told Times Radio.

‘The scientists are not there to explain what the government has judged necessary to do’.

But as there are rising concerns about cases, hospitalisations and deaths all rising from the near-zero levels they hit over the summer, data shows Britain’s outbreak is nowhere near as bad as it was during the spring.

Covid-19 patients are currently occupying fewer than two per cent of all hospital beds in England. The most NHS recent snapshot — released three weeks ago — showed just 478 out of 110,000 beds in use were by Covid-19 patients on September 3.

This has since risen to 1,883, according to Department of Health data. Health chiefs have yet to update the total beds occupied figure since but it barely changed over the summer.

NHS England officials have not publicly revealed how many beds they have available in total but it’s thought to be around the 110,000-mark.

Capacity was bolstered by standby beds commandeered through a deal with private facilities, plus extra space at seven Nightingale hospitals purposely built to stop the NHS from being overwhelmed. 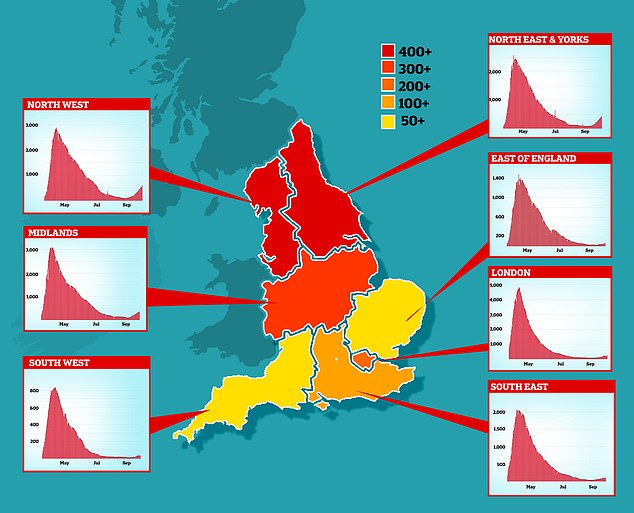 Separate data also shows NHS hospitals across England and Wales are still recording hundreds of fewer deaths than expected every week since the outbreak began to tail off in May. But the number of patients dying from the coronavirus did rise slightly in the week ending September 20, in line with a national spike in cases, from 64 to 98.

Deaths of people in their own homes from causes other than the virus continued to run at far above average rates.

There were 2,962 such fatalities during the week, 711 more than the average for the time of year, and doctors noted Covid-19 symptoms in only eight of their cases.

NHS England today said the service was still encouraging people to visit hospital for all medical needs if and when they need to, amid fears Britons are still too scared to visit in case they catch the virus. Boris Johnson this summer had to urge the public to seek treatment if they need it, insisting the service was safe from Covid-19.