Britain announces 351 more Covid-19 deaths taking official number of victims to 36,393 – as government scientists reveal UK’s crucial R rate is still near the point where an outbreak could spiral out of control

Britain today announced 351 more coronavirus deaths, taking the official number of victims to 36,393 as Government scientists warned the reproductive rate is still teetering on the brink of spiraling back out of control.

Today’s death toll – not yet verified by the Department of Health – is marginally lower than the 363 recorded yesterday, the lowest figure on a Thursday since March 26 (103).

The preliminary figure is calculated by adding up the individual updates from each of the home nations, but today’s jump in deaths does not include fatalities in England’s care homes.

Officials will announce the true daily increase at Downing Street’s daily press conference, which  will be higher as the crisis in the care sector continues to burn.

Experts sitting on Number 10’s SAGE panel today revealed the crucial R-value – the average number of people that will contract coronavirus from an infected person – was between 0.7 and 1 across the UK for the second week in a row.

Officials must keep the number below 1 otherwise the outbreak will start to grow again and threaten a second wave. However, the latest data is three weeks out of date due to a lag in the government’s mathematical modelling.

The new number does not factor in the slight relaxation of Britain’s lockdown measures, announced by Prime Minister Boris Johnson on May 13.

In other developments to Britain’s coronavirus crisis today: 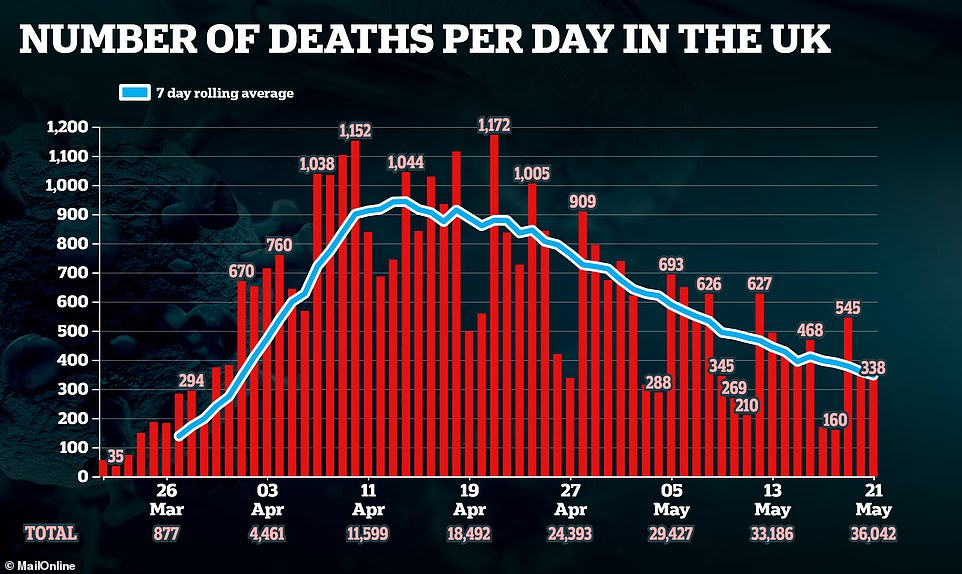 The lack of downward movement is thought to be driven by the continued spread of the virus in care homes and hospitals during the period covered rather than the wider community.

Mr Johnson has said ministers would reimpose controls if the rate of transmission of the virus started to pick up again.

Announcing his ‘road map’ out of lockdown Mr Johnson said: ‘We must make sure that any measures we take do not force the reproduction rate of the disease – the R – back up over one, so that we have the kind of exponential growth we were facing a few weeks ago.’

The R is calculated by working out how fast the virus spreads by comparing data including hospital admissions, the number of patients in intensive care, death statistics and surveys to find out how many people members of the public are coming into contact with.

Health Secretary Matt Hancock said in today’s Downing Street briefing: ‘We’re constantly keeping the R under review and it is one of our five tests… we don’t think it’s above 1, we think it’s in a range, so it still meets that test.’

He said the R was an ‘incredibly important data point’ but was not the only thing politicians were considering as they ease the lockdown. He said a change in the range was ‘important to look at’ but officials were not re-thinking their decision to start easing lockdown. Dr Jenny Harries, deputy chief medical officer, added that the real goal was to get the number of cases down, and the R was one of a number of ways to track this.

The chair of a Parliamentary science committee, Greg Clark MP, said officials should not focus too much on the R and should look at the wider picture.

He said: ‘It’s not clear how the R rate in care homes is relevant to the R rates of people going about their daily business,’ adding that the government’s figure was clearly skewed by faster transmission in hospitals and nursing homes.