The UK abandoned coronavirus testing in March because the outbreak was already out of control and hundreds of thousands of people were infected, officials have admitted.

Public Health England bosses, who were grilled by MPs this morning, admitted that officials wanted to follow the strategy of South Korea to keep a lid on the pandemic.

But shortly after the February there were ‘many hundreds of thousands’ of people infected with COVID-19 and trying to test them all would have been futile.

At the time the government was managing to test fewer than 2,000 people per day.

As a result, directors at Public Health England said, it was ‘not worthwhile’ to continue trying to find and isolate every case of COVID-19 and officials.

The chief medical officer for England, Professor Chris Whitty, publicly announced on March 12 that the government would no longer test anyone outside of hospitals.

The government has been heavily criticised for building its testing capacity too slowly, with experts saying better testing could have helped to contain the virus and save lives.

Current testing efforts are on a much greater scale but PHE this morning revealed that huge numbers of people sent home testing kits are not returning them.

The posted kits are counted as a test in the government’s much-heralded daily numbers, but Professor John Newton, director of health improvement at PHE, could only say ‘certainly more than half’ of the tests are currently returned to the lab.

A revealing meeting with MPs on Parliament’s Science and Technology also found: 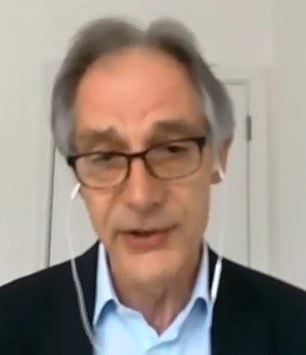 South Korea has earned global acclaim for its policy of intensively testing and isolating everyone in the population suspected of having COVID-19.

This means the cases there have been contained to relatively small areas and the number of them is extremely low (around 11,000 confirmed cases).

Britain had wanted to follow the same strategy but, by the time officials realised the virus was spreading in the UK, it was already too late.

She explained: ‘It was a decision that was come to because of the sheer scale of cases in the UK which had been introduced by multiple introductions, particularly after half term, from European countries we now know had large amounts of prevalence themselves.’

Professor Doyle is believed to be referring to Italy in this point – it was around half-term that the outbreak in the country’s Alpine ski resorts took hold and rattled Britain’s schools, many of which had sent pupils there on trips during the week off.

‘So we had multiple introductions,’ Professor Doyle added, ‘with many hundreds of thousands of people in March who had now been exposed to this virus in this country.

On March 12 Professor Chris Whitty announced that the government was stopping testing of members of the public for COVID-19.

Until then, its policy was to test everyone suspected of having the virus if they had been to a country where cases had been confirmed.

But as the outbreak spiralled out of control, the government decided to only test people who were in hospital as patients or staff.

That persisted until late April, when officials began to widen the criteria again.

Home tests are now available but Professor John Newton said he didn’t know how many people who ordered them were actually returning them to the labs.

When asked directly what the return rate is, Professor Newton hesitated before saying: ‘Certainly more than half.’

Asked again by Greg Clark, chair of the meeting, Professor Newton added: ‘I’m afraid I don’t have that figure.’