The Lions were asleep in their Gabba jungle for the first quarter of their contest against GWS, but roared back to life to secure a big 16.14 [110] to 16.6 [96] win on Saturday afternoon.

After their shock loss to Hawthorn in Launceston last week, Brisbane came out of the blocks flat and were staring down the barrel of another AFL loss after surrendering 49 points in the first quarter.

It was the most points any visiting side has piled on the Lions in a first quarter since 1995 when North Melbourne put 50 on the Brisbane Bears.

However, a rev-up from coach Chris Fagan at quarter-time, a suffocating second quarter and a five goals to two third quarter turned the tables and consigned GWS to their eighth loss of the season.

Compounding the loss, the Giants lost midfielder Callan Ward to concussion after he copped a heavy knee to the head from Lion Eric Hipwood. 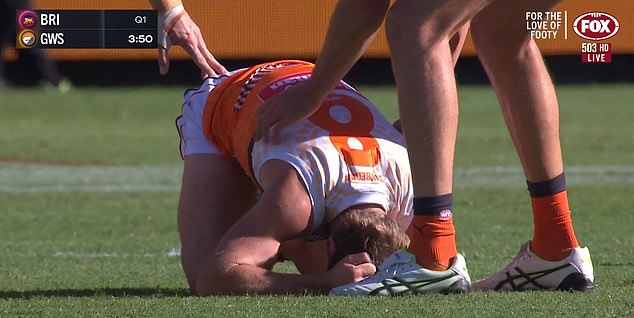 Ward tried to play on but was eventually ruled out of the game by the GWS doctor under concussion protocols.

It was the sixth game in a row the Lions had scored 100 points or more, the first time the club has achieved that since 2002 when they won the flag as part of their three-peat.

That looked unlikely midway through the first quarter when the Giants shot out to an unlikely 30-point lead.

But as the great sides often do, the Lions turned into anacondas and restricted their opposition, taking their chances and ultimately opening up the game for a huge win. 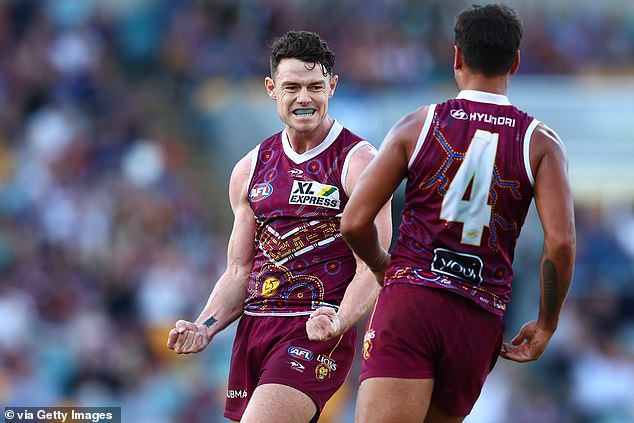 Neale had a huge game for the Lions and was busy all afternoon, helping steer his side to a win after surrendering 49 points in the first quarter

There were danger signs in the final minutes when Jesse Hogan kicked a goal to slash the margin to just 10 points, but McCarthy answered right back with his fourth goal of the match to ice the game.

Lachie Neale was outstanding for the Lions with 39 touches and two goals while Jarrod Berry had his best game this season with 33 disposals and a goal of his own.

‘They kept coming and coming, they had a great start in the first quarter which put us on the back foot early,’ Berry said.

‘But to our credit we grinded the game out.’

Toby Greene had four goals for GWS, three of them in the first quarter, but he was unable to influence the match when it mattered. 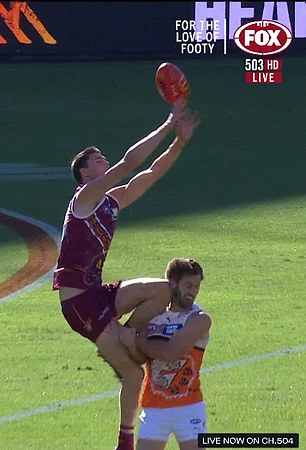 The Lions have been the No.1 team in the AFL in the first 10 minutes of games in 2022 but they looked a mile off that pace as the Giants jumped them from the first whistle.

Bobby Hill grabbed the first goal of the match swiftly followed by Greene, with a brace from James Peatling and goals to Josh Kelly and Stephen Coniglio opening up a shock 37-7 lead midway through the first quarter.

It was a six-goal blitz in just 18 minutes and had the Lions desperately searching for answers.

‘They’ve got to change something, they are on the heels Brisbane. GWS are outhunting them,’ former Geelong player and Adelaide coach Brenton Sanderson said.

GWS were smashing the Lions everywhere, including a 7-1 centre clearance record. It was the highest first quarter the Lions had surrendered all season by a wide margin.

‘They are a rabble defensively at the moment Brisbane,’ Channel 7’s Andrew Maher said.

Lincoln McCarthy led the fightback for the home side with three critical goals to bring his side back to within two goals.

Ward has the nickname Cement Head and he showed why, collecting a knee to the head from Lion Eric Hipwood but getting up and playing on as GWS took a 49-37 lead into quarter time.

It was shaping as a ripper battle between two gun medium forwards with both Greene and McCarthy finishing the first quarter with three goals each from just four touches.

Ward finally left the field for assessment midway through the second quarter as the points dried up, Hipwood’s first major since returning from injury the only score.

The Giants activated their medical sub with Ward ruled out with concussion, Xavier O’Halloran taking his place in the team. Ward had previously been knocked unconscious in the 2016 preliminary final against the Western Bulldogs.

The Lions completely changed the tempo of the match with the pressure from the Lions lifting significantly and after 20 possessions Jarrod Berry finally made GWS pay with a goal to bring his side back to within three points at halftime.

A two-goal burst out of halftime handed the Lions the lead and all of a sudden it was the Giants that were looking rudderless and needing direction.

Deven Robertson was playing just his second game of the season for the Lions, but he put on a moment of sensational brilliance to assert his desire to keep his spot.

Robertson attacked the ball, stripped the ball off Jarrod Brander and score a vital goal to push the lead out to 12. It was an ominous sign for the Giants who have not won a second half all season. 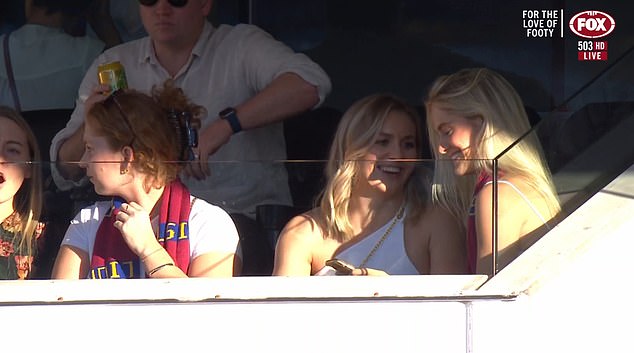 When Neale hammered home a goal off an intercept, GWS needed four kicks to get back in front and were facing Mount Everest on the Lions’ home deck.

The five goals to two blitz gave the Lions a 21-point lead heading into the final quarter and while GWS goaled first to have some sniff, the home side was able to run away with an important win in terms of remaining in the AFL top two.

At the Gabba, Brisbane