Baby Saylor Thomson is lucky to be alive after doctors removed a spinal tumour from the premature newborn that was almost twice her size.

Saylor was given little chance of survival after being born with a 2kg sacrococcygeal teratoma.

But she has grown stronger by the day following a successful six-hour operation involving 25 medical specialists at Brisbane’s Mater Mothers’ Hospital.

Parents Rachel and Kieran Thomson have shared their story to give hope to others with World Prematurity Day coming up on November 17.

Rachel and Kieran Thomson are pictured with Saylor and her older sister. Saylor had been given little chance of survival after being born with a two-kilogram sacrococcygeal teratoma

Sacrococcygeal teratoma is a tumour that grows from a baby’s tailbone and occurs in one out of 40,000 live births.

The tumour diverts blood from the baby, raising the risk of heart failure.

When Rachel was 20 weeks’ pregnant, she and Kieran were told their baby had a 25-40 per cent chance of survival.

Saylor was born three months premature in August, with the tumour weighing double her birth weight of 1,025 grams.

‘When the social worker and surgeons first gathered to tell us she had little chance of making it due to prematurity and the tumour, I cried hysterically,’ Ms Thomson said.

‘But being able to hold Saylor in my arms and know she has come through the other side is something special.’

Mater Maternal Fetal Medicine Unit subspecialist Sailesh Kumar said Saylor’s tumour was the largest ever removed from a baby of her size at Mater Mothers’ Hospital,

‘We don’t know why the tumour grows, but it arises from embryonic germ cells and is four times more likely to occur in female infants,’ Professor Kumar said.

‘Saylor’s tumour was extremely large and very complex. The tumour extended into her pelvis and abdomen.

‘Many of these babies do not survive the pregnancy.’ 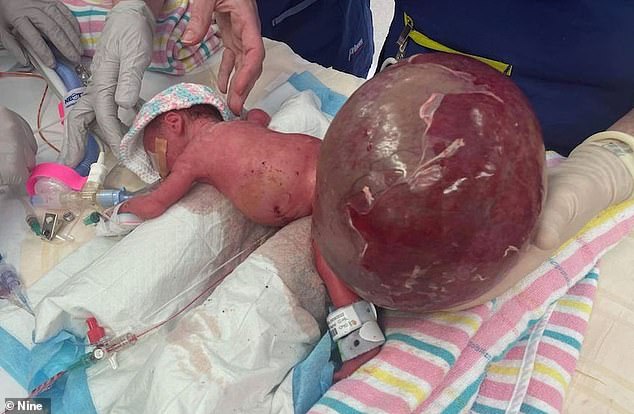 Three months after her birth, Saylor is thriving and growing stronger each day.

‘Being born prematurely, even at 28 weeks, carries its own potential risks,’ Dr Mausling said.

‘Without a doubt, this was the biggest teratoma I have seen removed from any newborn baby, regardless of gestation.’ 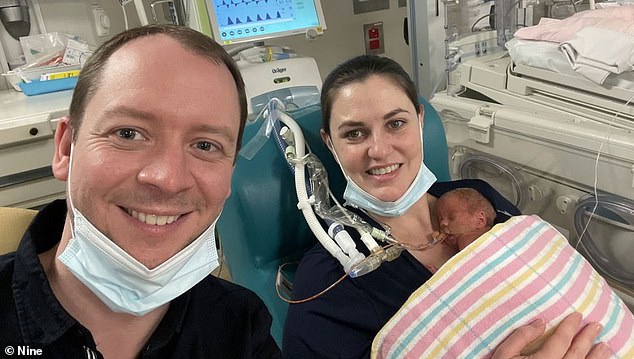