‘You didn’t even warn us!’: Brie Larson leaves fans ‘on their knees’ with shock transformation as she unveils tattoo sleeve while posing in her bra

She’s known for her chic and feminine style.

Yet Brie Larson mixed things up and debuted a grunge makeover to the shock of her fans on Sunday.

The Marvel star, 33, dropped jaws as she unveiled a full sleeve of tattoos but she was quick to assure fans that the inkings were only temporary. 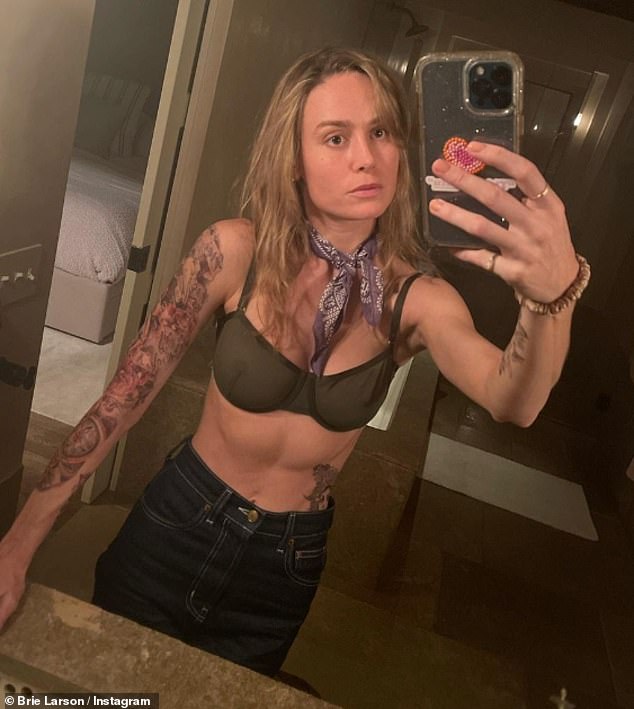 ‘You didn’t even warn us!’: Brie Larson left her fans ‘on their knees’ with a shock transformation on Sunday as she unveiled a tattooed sleeve while posing in her bra

She showcased her incredible figure as she posed in just a khaki bra and jeans, exposing her ribbed abs and fake tattoos on her stomach.

Her blonde locks were styled in loose waves and Brie completed the look with a purple paisley necktie.

The Oscar-winning actress captioned the snap: ‘What it’s like you’ve never seen temporary tattoos before!’ 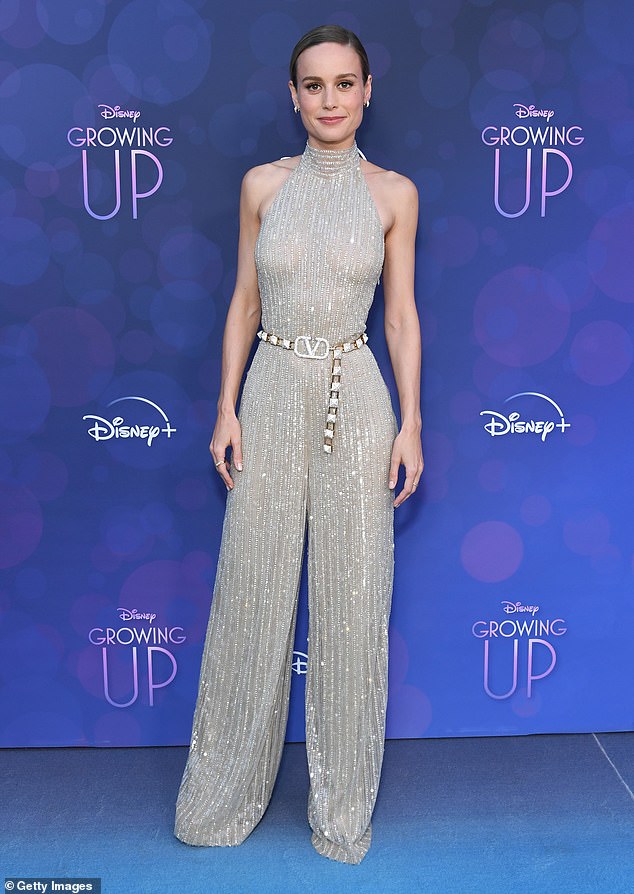 That’s our girl: Brie is known for her chic and feminine style and is not believed to have any real tattoos of her own (pictured in September 2022)

Her fans immediately meant into meltdown, commenting: ‘BRIE? SORRY? MOMMY? SORRY’; ‘YOU DIDNT EVEN WARN US HOW DARE YOU’; ‘IM ON MY KNEES’; ‘THIRD TATTOO, ‘HELLO’ FROM EVANESCENCE

‘But have you considered making them permanent. You pull them off exceptionally well’; ‘There’s a whole new level of crush I didn’t know I could achieve and yet here we are.’

Brie didn’t explain why she was modelling the temporary tattoos but it could be to do with her upcoming role in Fast X (also known as Fast & Furious 10). 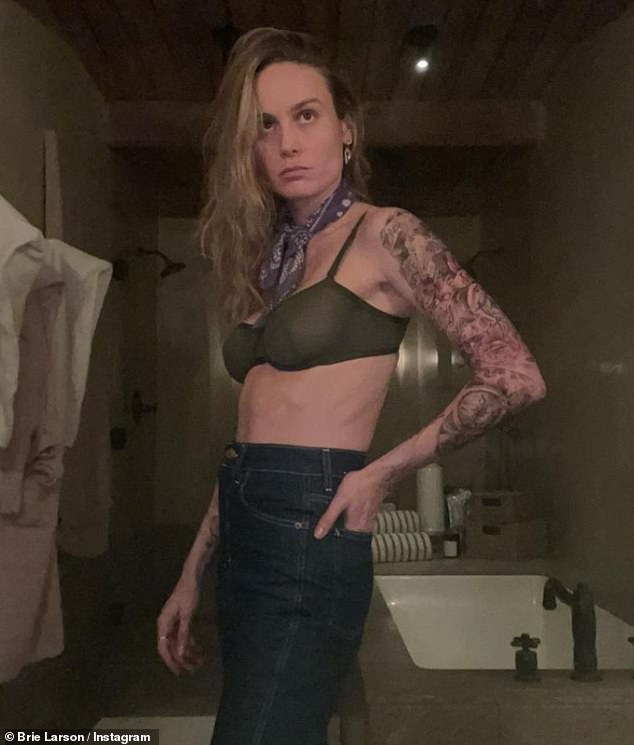 Looking good: The Marvel star, 33, dropped jaws as she unveiled a full sleeve of tattoos but she was quick to assure fans that the inkings were only temporary 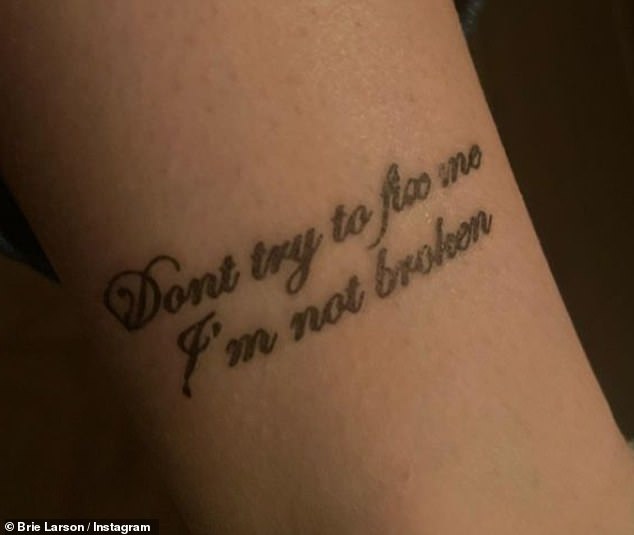 Cheeky: The Oscar-winning actress showed a close up of one inking which were Evanescence lyrics and penned ‘What it’s like you’ve never seen temporary tattoos before!’ 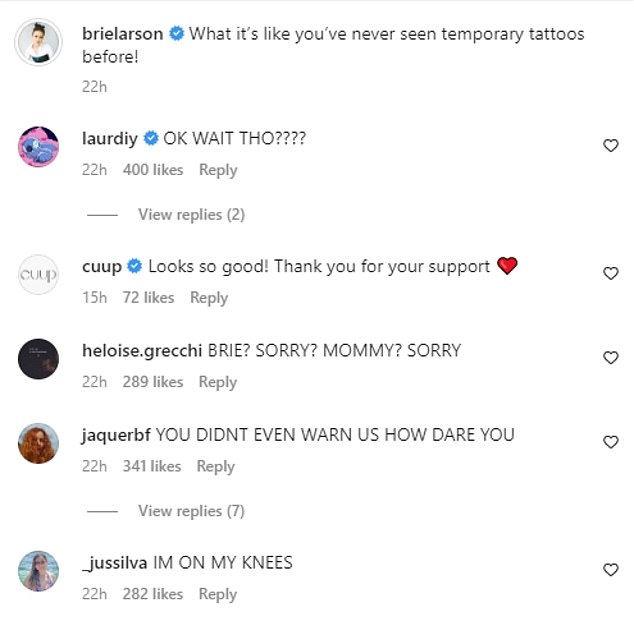 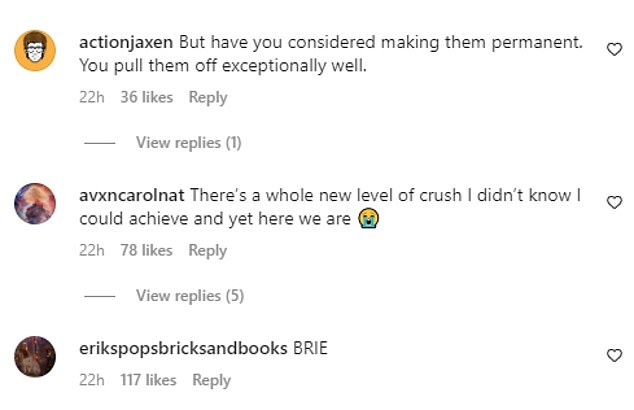 Can’t believe it: Her fans immediately meant into meltdown and were quick to praise the look

It certainly wouldn’t be to do with her latest project, Lessons In Chemistry, an Apple TV+ drama set in the Fifties.

The program is based on Bonnie Garmus’ novel of the same name, which was published this past April.

Brie stars as Elizabeth Zott — an aspiring scientist – who falls pregnant and is fired from her job.

She then begins hosting a cooking show, which makes her very popular with potential suitors.

In the process, Zott teaches housewives nationwide about the value of independence and the intricacies of food science.

Lessons In Chemistry — which also stars Lewis Pullman, 29 — is currently set to premiere at an unspecified date on the Apple TV+ streaming service next year. 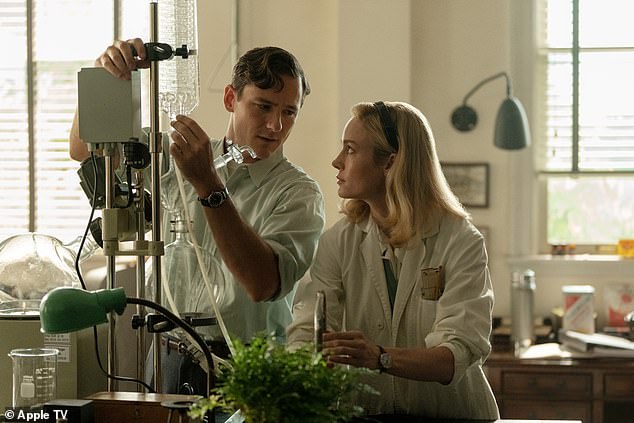 One to watch: It certainly wouldn’t be to do with her latest project, Lessons In Chemistry, an Apple TV+ drama set in the Fifties