Brian Laundrie’s weeklong disappearance into a 25,000-acre nature reserve is nothing compared to other solo trips he’s taken into the wilderness – including a hike on the Appalachian trail lasting three months, DailyMail.com has learned.

‘I know he lived in the Appalachians for what I believe was three months, and he did it by himself, so I know he’s skilled at it,’ said Rose Davis, best friend of Gabby Petito, whose body was found Sunday in Grand Teton National Park, Wyoming.

‘He and Gabby both told me stories about it,’ Rose added in an exclusive interview with DailyMail.com. ‘And you could see the enthusiasm in his voice when he would talk about his adventures by himself like that trip into the Appalachians,’ a trail stretching more than 2,000 miles from Georgia to Maine.

The 22-year-old’s death was ruled a homicide on Monday, and Laundrie has been declared a person of interest.

Gabby Petito’s death was ruled a homicide on Monday, and Brian Laundrie has been declared a person of interest 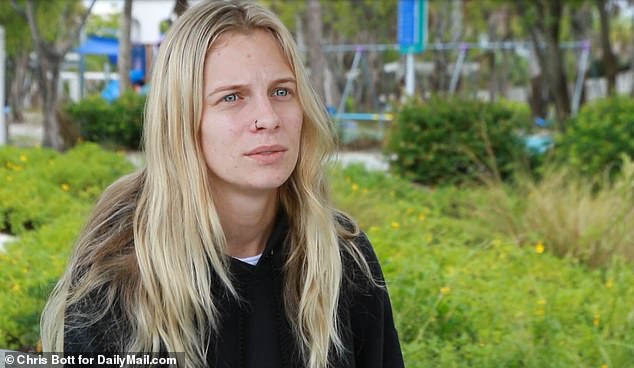 Gabby Petito’s best friend Rose Davis (pictured) revealed in an exclusive interview with DailyMail.com that Laundrie is well-equipped to survive in the reserve 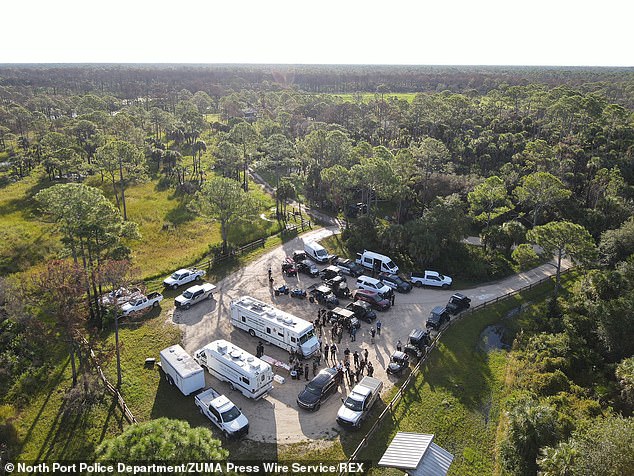 Law enforcement are on their fifth day in the search for Brian Laundrie in the vast Carlton Reserve in Sarasota, Florida

He was last seen more than a week ago leaving his parents’ home in North Port, Florida with a backpack. His whereabouts remain unknown, with the manhunt entering its fifth day.

Police and FBI agents resumed their search of the Carlton Reserve early Wednesday, sharing photos of search dogs heading out into the swampland.

A van from the Sarasota County Sheriff’s Underwater Recovery Force, towing a small dingy, turned up about an hour after an airboat was seen for the first time at the 25,000-acre reserve.

When asked if divers were recovering anything significant, North Port Police information chief Josh Taylor said: ‘We are looking. Nothing found. We have to work to rule it out though.’

‘Area resources are looking at large bodies of water, including dive teams, boats, and sonar equipment. At this time, this does not mean anything has been found. It’s a part of the overall search process,’ Taylor said. ‘Additionally, right now, NPPD is on scene of a possible self-inflicted death, roughly one mile from the Environmental Park. Nothing to do with this case.’

Rose said she met Gabby early last year on Bumble BFF, a meeting app for friends, and they instantly hit it off.

Rose, 21, who lives in Sarasota, said Laundrie often liked to be alone and didn’t appear to have any friends.

Even when he’d join her and Gabby at the beach in Florida, he’d go off to sit by himself.

She described him as a jealous and controlling, and said he’d try to prevent his fiancé from hanging out with her.

The couple had several brutal arguments in which Petito would drive off to spend the night at her house.

‘I think that’s one reason why Brian rushed into this van trip,’ Rose said of the cross-country trip Petito and Laundrie began in July. ‘He saw how close we were getting and he realized that after every fight, she was staying at my house. And he didn’t have control over that.’

The couple were filming their adventures for a ‘van-life’ YouTube channel Petito was creating.

Rose was planning to meet them in Wyoming’s Yellowstone National Park in September and had even asked her boss for days off for the trip. They were planning to lock in a specific date on August 29, Rose’s birthday, but Petito never called.

Rose said she was horrified when police then released details of an argument the couple had in Moab, Utah in early August, just days after Rose last spoke to her best friend.

‘I’m sure it caused an argument when Gabby told him I was going there soon because he knows dang well that if I saw them in a rocky place, I would take her home with me,’ she told DailyMail.com. ‘I would be like screw this, you’re coming home with me. We’ll do this on our own some time.’

Rose had considered Laundrie a friend at one point, but said she now hopes he’ll be caught and made to suffer.

‘I hope he’s found and then I want him to get convicted and go to jail,’ she said. ‘I won’t go into detail with the rest that I want to have happen to him, him and his parents.’ 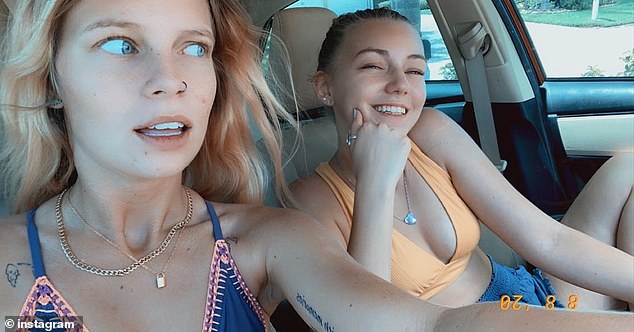 Rose shared this photo of herself with Gabby before her best friend set out on her road trip, only to never return 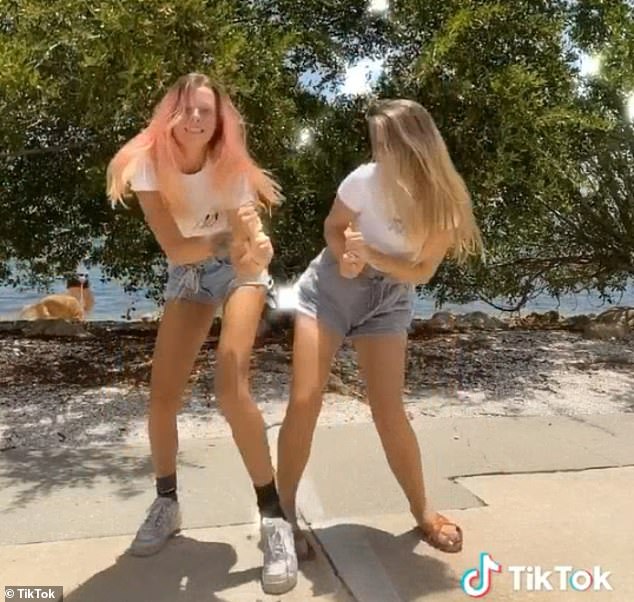 Rose who lives in Sarasota, a half hour from Gabby and Brian’s home in North Port, said she last spoke to Gabby in early August and was planning to meet her in Wyoming’s Yellowstone National Park in September 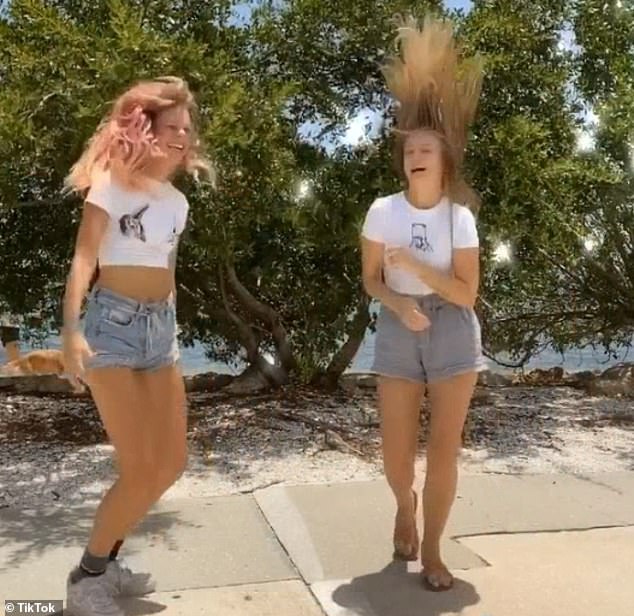 In an exclusive interview with DailyMail.com Friday, Rose revealed she met Gabby early last year and they instantly hit it off. She shared videos of them taking part in a TikTok dancing trend earlier this year

During an interview with DailyMail.com on Friday, Rose went into detail about her friend’s increasingly combative relationship with Laundrie. She recalled that he allegedly went so far as to hide Petito’s ID once so that she couldn’t meet up with her at a bar, trigging a violent episode similar to the one police investigated Aug. 12.

‘Brian took her ID just so she wouldn’t be able to come out with me,’ she said.

‘He’s got these jealousy issues and he struggles from what Gabby called these “episodes,” where he would hear things and hear voices and wouldn’t sleep.

‘Gabby had to stay at my house a bunch of times because she just needed a breather and didn’t want to go home to him.’

Rose panicked when she learned that Laundrie had returned home from Wyoming without her best friend.

‘When I saw that Brian was back from the trip, that was the first thing that popped into my mind – that Brian had one of his episodes – and I was just hoping he didn’t have a snapping moment,’ Rose said.

Rose said she met Gabby early last year on Bumble BFF, a meeting app for friends, and they instantly hit it off.

‘Neither of us had any friends,’ Rose recalled, laughing.

‘We just went everywhere together,’ she said.

Gabby, who worked last year at Taco Bell and then took a job at a smoothie place, would sometimes join Rose when she was working her job delivering pizza.

Rose got to know Laundrie early on when she’d visit their home in North Port.

‘I used to consider him a friend, for sure, because I’d hang out with them a good amount,’ she noted.

‘He had this composure as a sweet, nice, caring guy. But you could tell he’s a little off, a little weird. Like, he’d set up our hammocks when we’d go to beach, but wouldn’t sit with us, which I found bizarre.

‘Brian has a jealousy issue,’ Rose said. ‘I’m her only friend in Florida to my knowledge and that’s not because she can’t make friends, he just didn’t want her to have friends.’ 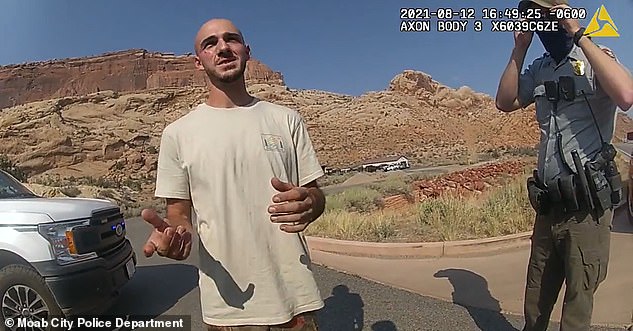 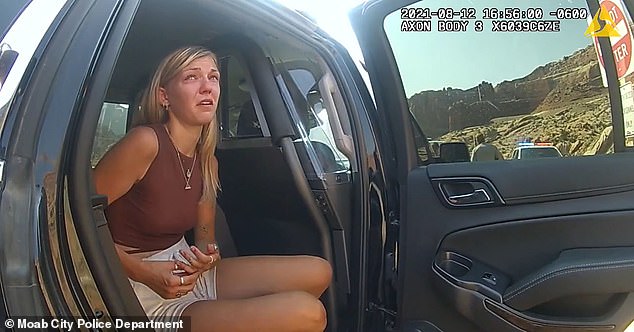 A tearful Petito is seen in the back of the police car. Laundrie admits he ‘pushed her’ during the altercation and cops determine Petito was ‘the primary aggressor’

Rose and Gabby were so close that they’d share their locations with each through an iPhone app ‘in case we got lost,’ Rose said. But when Laundrie found out, he made Gabby delete it, she said.

‘I didn’t push the issue because I didn’t want it to cause an argument with him,’ she said.

‘He was always worried she was going to leave him,’ she added. ‘It was a constant thing to try to get us to stop hanging out.

‘He’d demand she be home for dinner, often cut our time short. He’d demand to pick her up from my house, even when I had a car and offered to drive.’

She said the couple wouldn’t argue in front of her, but she could tell afterward. Gabby would appear upset, but he’d seem calm.

She said it was evident in the body camera footage police shared of an incident involving the two in Moab. A witness had called 911 after seeing the couple fighting.

When police pulled the couple over, Gabby was breathing heavily and crying, while Laundrie seemed composed, even as he exhibited scratch marks on his face.

Gabby was seen with tears streaming down her face, telling officers she ‘was trying to get him to stop telling me to calm down’ and admitting the couple ‘have been fighting all morning.’

She also told cops that she suffers from OCD and anxiety. Both she and Laundrie also said she had been stressed about the YouTube blog they were working on about their cross-country trip.

Rose, who knew that her friend suffers from anxiety, said ‘for her anxiety to act up like that, there has to be a decent thing to trigger it. Something had to happen, or just a lot of things had to build up.’

‘I’m a little upset she didn’t just call me after that fight, because she would have before,’ Rose added. 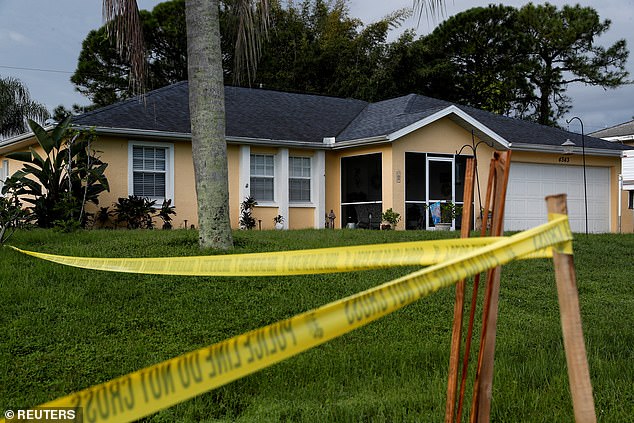 Laundrie was last seen more than a week ago leaving his parents’ home in North Port, Florida with a backpack and his whereabouts remain unknown 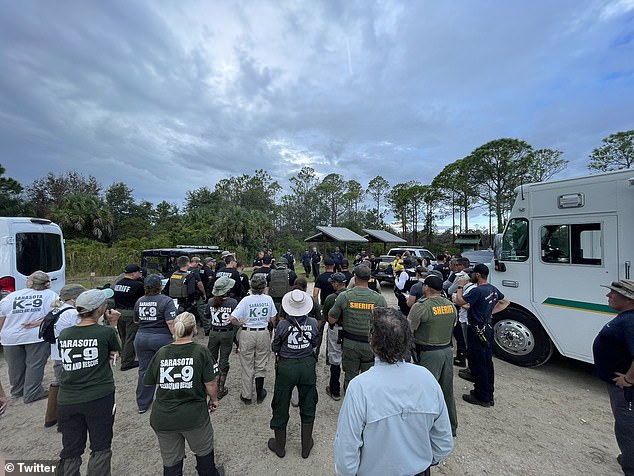 The manhunt for Brian Laundrie, 23, has entered its fifth day as police continue to search the 25,000-acre Florida nature reserve

She said the body camera footage reminded her of the ID episode from Florida.

Last summer, Gabby was driving to a bar to go line-dancing with Rose in Sarasota when she noticed her driver’s license missing from her wallet.

Gabby returned home and confronted her boyfriend, who Rose said admitted he took her license.

‘Brian didn’t want her to go out with me, so he took it,’ she recalled. ‘She was so hysterical. She told me she slapped him and said something about him pushing her.

‘She was holding back. I told her you need to tell me the deep of what happened and she just wouldn’t.’

Rose also tried, delicately, to get Gabby to reconsider her engagement to Laundrie.

Gabby told her mother she’d put off the engagement, but according to Rose, they were still looking to get married.

‘I told her you’re young and Brian is a little controlling for her, but I also told her to do what makes you happy and I’m here to support you,’ she said.