By Ian Gallagher For The Mail On Sunday

Britain’s deal with Brussels is the ‘beginning of a moment of national renewal’, according to the UK’s chief negotiator.

Lord Frost hailed ‘one of the biggest and broadest agreements ever’, saying it ensured the UK ‘sets its own laws again’. He added: ‘All choices are in our hands as a country and it’s now up to us to decide how we use them and how we go forward in the future.’

Lord Frost’s euphoria follows almost 12 months of gruelling negotiations, culminating in an all-night haggling session over the quotas for individual species of fish.

Britain’s deal with Brussels is the ‘beginning of a moment of national renewal’, according to the UK’s chief negotiator (pictured arriving back in UK after doing the deal)

MPs will vote on the deal in Parliament on Wednesday, with the UK to exit existing trading rules on Thursday. The European Parliament also needs to ratify it, while EU ambassadors received a Christmas Day briefing on the trade deal from EU negotiator Michel Barnier.

A 1,246-page document, including 800 pages of annexes and footnotes, setting out the post-Brexit relationship with the EU, has been published on the UK Government’s website. 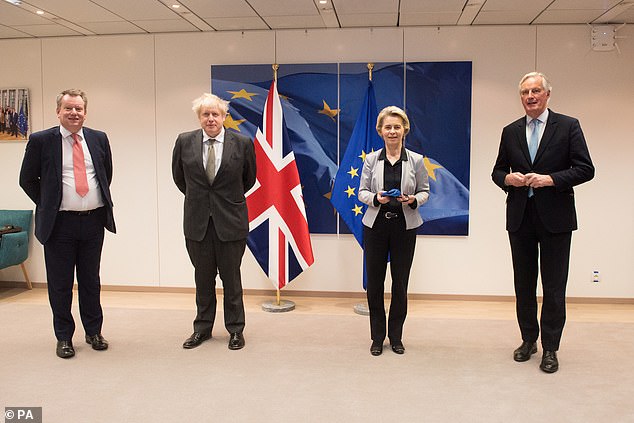 Lord Frost said: ‘There’s no more role for the European Court of Justice, there’s no direct effects of EU law, there’s no alignment of any kind, and we’re out of the single market and out of the customs union, just as the manifesto said we would.’ Senior members of the UK negotiating team said the deal allowed for a ‘managed divergence’ from EU rules and standards.

A free trade agreement usually rules out tariffs being applied to imported goods. Under the terms of this deal, if either party acts in a way the other views as anti-competitive, it can go to an independent arbitrator. If that doesn’t resolve the complaint, either party can impose tariffs.

European Commission President Ursula von der Leyen said the deal was ‘fair’, adding that it was ‘time to turn the page and look to the future’.